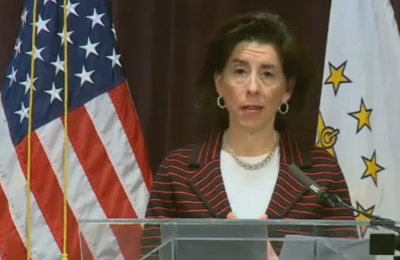 RHODE ISLAND—Governor Gina Raimondo outlined her plans to move into Phase 2 of her plan to reopen Rhode Island today during her daily press conference on COVID-19. She also announced updates on the state of COVID-19 across the state.

There were 23 new deaths from COVID-19 in the state today and 170 new cases were reported. 40 people were currently on ventilators and 56 were in intensive care. 1084 people were discharged from hospitals.

“Not every state is doing as well as we are,” Raimondo said. “My focus is going to be on work. Getting people back to work safely and effectively.”

Raimondo used the conference to announce that the rate of spread and hospitalization was currently on track to continue with the tiered reopening plan for the state, which will see the state’s businesses come slowly back to life. Rhode Island is currently in Phase One of the plan, which mandates restaurants can only have outdoor seating or take-out options and restricts social gatherings to five or less people, among other restrictions.

Phase Two is scheduled to begin on June 1.

This means that, should the state of COVID-19 remain relatively diminutive, numerous changes will be implemented concerning what businesses can operate and how.

Notably, barber shops, salons, gyms and fitness studios, tattoo parlors and other close-contact businesses will be allowed to open on June 1, albeit with severe rules concerning mandated cleaning regimens and caps on the numbers of customers allowed.

“This is going to be difficult, cost you money and hamper your business,” Raimondo said of the phased reopening plan. “But I don’t want you to think this is a forever thing.”

“There’s going to be a lot of information coming out in the next couple of weeks,” Raimondo continued. “I want to keep you calm and well informed and confidant as we move forward to next phase.”

Importantly, Phase Two will also see the reopening of places of worship and dine-in options at restaurants. Churched will only be allowed to operate at 25 percent capacity, and restaurants will be limited to 50 percent capacity. Restrictions on sharing materials between persons, such as menus, will remain in effect. Further, the size limit on social gatherings will be raised from 5 persons to 15.

In praising Rhode Island’s response to enacting some of the most severe social restrictions in the nation, Raimondo called the state the “shining star of America” and implored residents, “Don’t fight the rules. Follow the rules.”

“I wish this thing would go away,” Raimondo said. “Let’s just live with it. With the new rules.”