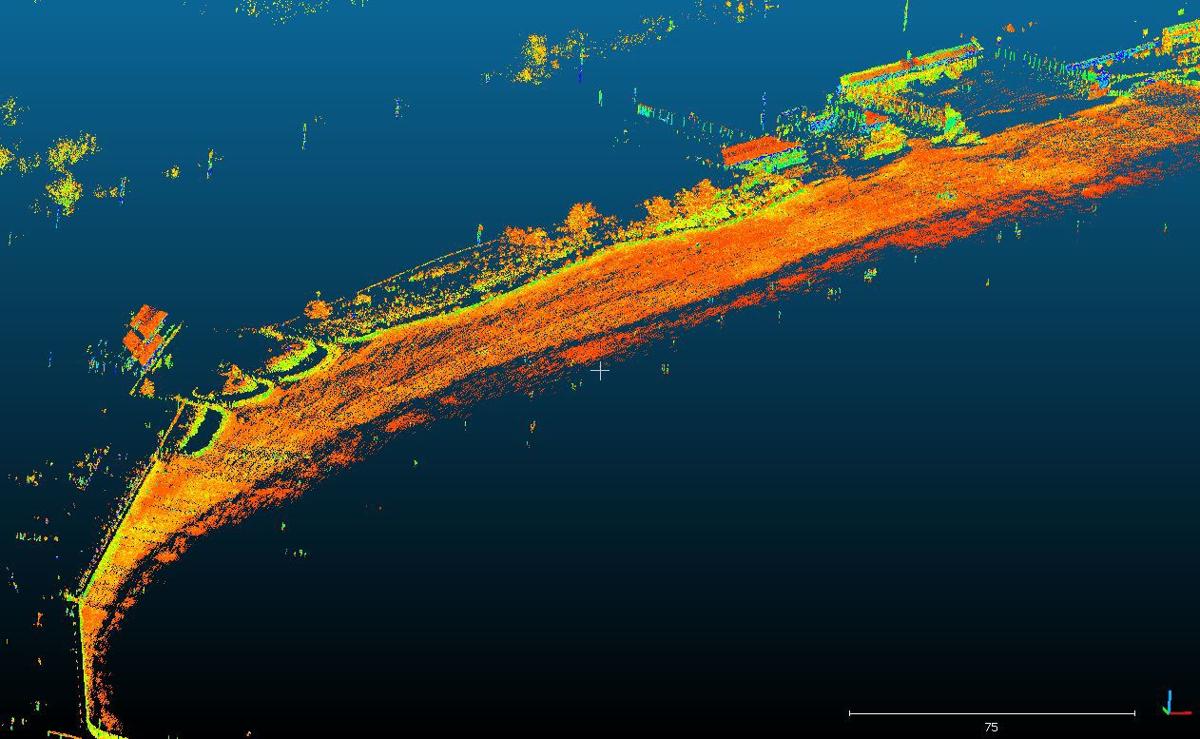 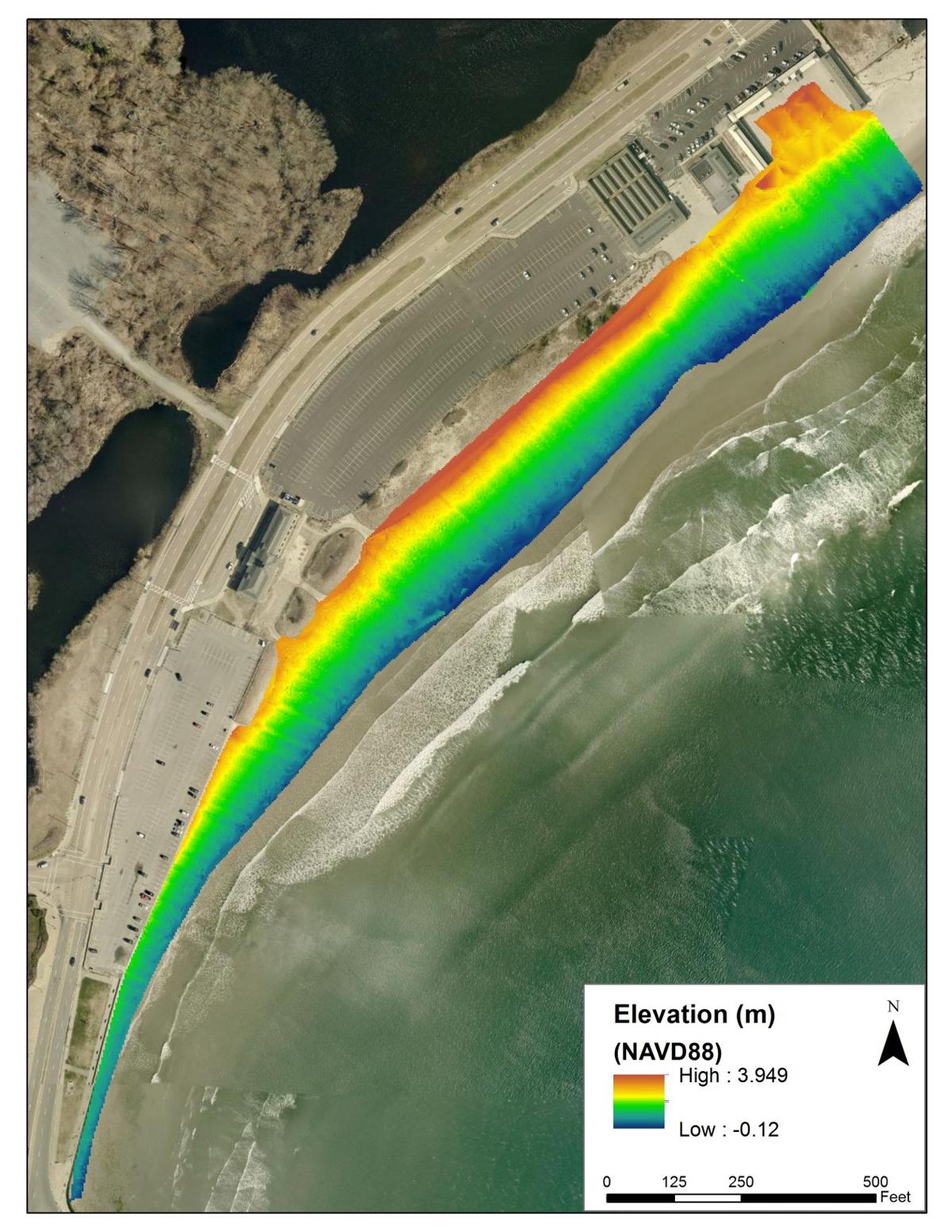 A LiDAR survey conducted in March of last year depicts sand volume on the beach. Photo courtesy of URI GSO.

A LiDAR survey conducted in March of last year depicts sand volume on the beach. Photo courtesy of URI GSO.

NARRAGANSETT – A professor from the University of Rhode Island’s Graduate School of Oceanography (URI GSO) is recommending further monitoring of the town beach to keep track of annual sand erosion and displacement, factors that could worsen with the increasing threats of sea-level rise and climate change, according to the scientist. Dr. John W. King, who was contracted by the town to conduct a survey of Narragansett Town Beach (NTB) this year using light detection and ranging (LiDAR) technology, said the town needs to continue with the studies to be better prepared to deal with potential future challenges at the beach.

“What we’re trying to do is advise you on what you should do to maintain your beach as a nice, wide beach where it currently is,” said King to the Narragansett Town Council earlier this week in a presentation reporting the results from the first rounds of LiDAR surveys conducted at NTB. “The bottom line is if this scenario [high sea-level rise by 2050] happens, your beach is going to move. It’s not going to be where it is anymore and you’re going to have to be thinking about how you can acquire the real estate on the other side of Route 1A, frankly.”

In 2018, King proposed a study of NTB after conducting a similar survey for the town’s wastewater treatment facility located along the beach on Ocean Road. The idea was considered by the Narragansett Recreation Advisory Board, a group of town council-appointed residents that work with the town’s recreation department, which ultimately recommended to the council the studies be carried out. At the time, the board’s reasoning was that the results from the surveys would serve as a “baseline” for future considerations regarding the beach (there is no current similar data set for NTB) and would also help illustrate the damages caused by a superstorm, such as Sandy in 2012, when applying for federal natural disaster relief funds. Council president pro-tem Jill Lawler, the council’s liaison to the recreational advisory board, said at the time that the studies would serve a similar purpose as an insurance policy for the beach.

“This is going to give us documentation on where our beach stands today,” said Narragansett Parks and Recreation Director Steve Wright at a recreational advisory board meeting in November of 2018. “As Dr. John King told me, what we have to do is start somewhere and have a baseline. Because when, not if, when we get another Sandy, this is going to help us tremendously with the [Federal Emergency Management Agency]. When we go for federal funding, we’ll have this documentation of where our beach was. If we do this every four to five years, it’s invaluable for our biggest asset here in town.”

The Narragansett Parks and Recreation Department is responsible for the overseeing and management of NTB.

With the town council’s approval off the board’s recommendation, King lead a team at URI GSO to carry out two surveys of NTB in 2019 – one in March (lower beach volume) and one at the end of the summer (quieter conditions). To gain a visual representation of sand distribution throughout the year at NTB, King’s team utilized LiDAR technology, which in this case involved a light-emitting system mounted to a boat that transmitted the light and used the reflections bouncing back to record the geographical elements of the targeted area. Brian Caccioppoli, a marine research specialist at GSO who worked alongside King on the surveys, likens the LiDAR process to standing on the beach at night and not being able to see anything, only to then turn on a flashlight and start receiving information about one’s surroundings.

“LiDAR is light-based technology,” he said. “From the surveys, we’re able to produce a three-dimensional model, and that data is very useful, it’s real elevation data all along the beach. You have continuous coverage across an entire beach.”

“Basically, the system is emitting light, and it’s reflecting back to the system and a record of elevations is being recorded,” Caccioppoli continued. “We integrate this with really high-precision GPS and vessel orientation, and when we mesh all this data together, that’s how we produce these 3D models.”

Similar studies conducted by URI GSO at Green Hill Beach in South Kingstown have shown a continuous trend downward in sand volume in recent years. King mentioned that surveys at East Beach in Quonochontaug showed virtually consistent sand volume along the coast, explaining that a beach’s location along the coastline can greatly impact sand movement and redistribution.

“We’re trying to understand and quantify seasonal changes along the beach,” he said. “Most of you have probably noticed that there’s an annual beach cycle. During the big storms in the fall and winter, a lot of sand gets eroded from the beach and gets stuck in bars offshore. And then, just due to normal wind action, when the storms are gone and we just have normal tides and waves, a lot of the sand from the bars comes back onto the beach, so you tend to get a larger, wider beach during the summer.”

In addition to the concerns of volume, King said that future sea-level rise factors could also adversely impact NTB’s sand movement. Pointing to National Oceanic and Atmospheric Administration figures predicting three to four feet of sea-level rise by 2050, King said the drastic change would take a toll at the beach.

“The really scary thing is that NOAA has created models which are accounting for high levels of greenhouse gases in the atmosphere and large amount of global warming and predicting high rates of sea level rise,” he said.

During the presentation of the research, councilor Patrick Murray stated that there had only been about a foot of sea-level rise in the last 80 years and questioned NOAA predictions showing 11 feet of sea-level rise by 2100. Murray also displayed skepticism toward climate change overall.

“If you go back to 90 years, sea level rise comes to about a foot total, yes, but the rate of increase is increasing,” King responded. “Sea level rise used to only go up maybe a centimeter, a centimeter and a half, you know, less than an inch a year, now it’s up to about three [centimeters] per year, so it’s doubled. That’s an exponential curve.”

Upon further questioning from Murray, King said that surveys could be adjusted if the NOAA predictions were inaccurate.

The study, including the two surveys at NTB last year, deduced that from March to September, the low end of the beach gained sand volume. However, King and his team advised that this result aligned with seasonal trends of sand redistribution, and cautioned that this initial testing was only the first round of surveying of what is intended to be a long-term study.

“By doing these seasonal surveys, we’re really able to capture changes in seasonality of the beach, or how much volume the beach regains over the summer season, and that’s really where we’re at right now, but what we hope to do and what we recommend is continue this beach monitoring program into the future so we re-establish baseline data, get elevation data and understand: is Narragansett more like Green Hill Beach? Is it losing elevation in a continuous way? Or is it more like East Beach? Does it fluctuate more irregularly?” said Caccioppoli.

Another benefit of the surveying, according to the town, is better understanding the sand volume of the beach, which will help inform the town how much sand to replenish on the beach just before the summer season starts. The town spends thousands of dollars annually on sand replenishment at NTB. After Superstorm Sandy in 2012, the town ordered 5,365 cubic yards of sand, spending nearly $170,000, to replenish its town beach. The cost to the town for conducting the first round of surveys was about $20,000, and additional surveys can be completed for about $9,900.

“This study was brought forward to the recreational advisory board and to Steve Wright and one of the reasons we brought it forward was because again, we didn’t have a baseline, and what we’re looking for is a baseline,” said councilor Rick Lema, who served on the recreational advisory board until his election to the council in 2018. “Yes, people can make predictions, and there can be predictions for the year 2000 up to 2030, but having a baseline information from these people at URI to be able to tell us where we were in 2019, and then if they revisit it every few years, they have the baseline, so that in 2030, it may not be 11 feet. It’s a big world. You’d have to be really good at your job to predict where all the water is going to be a few decades from now. But I think they’re doing a wonderful job and I think we need to continue with it so we know exactly where we stand with our beach, our most valuable asset.”