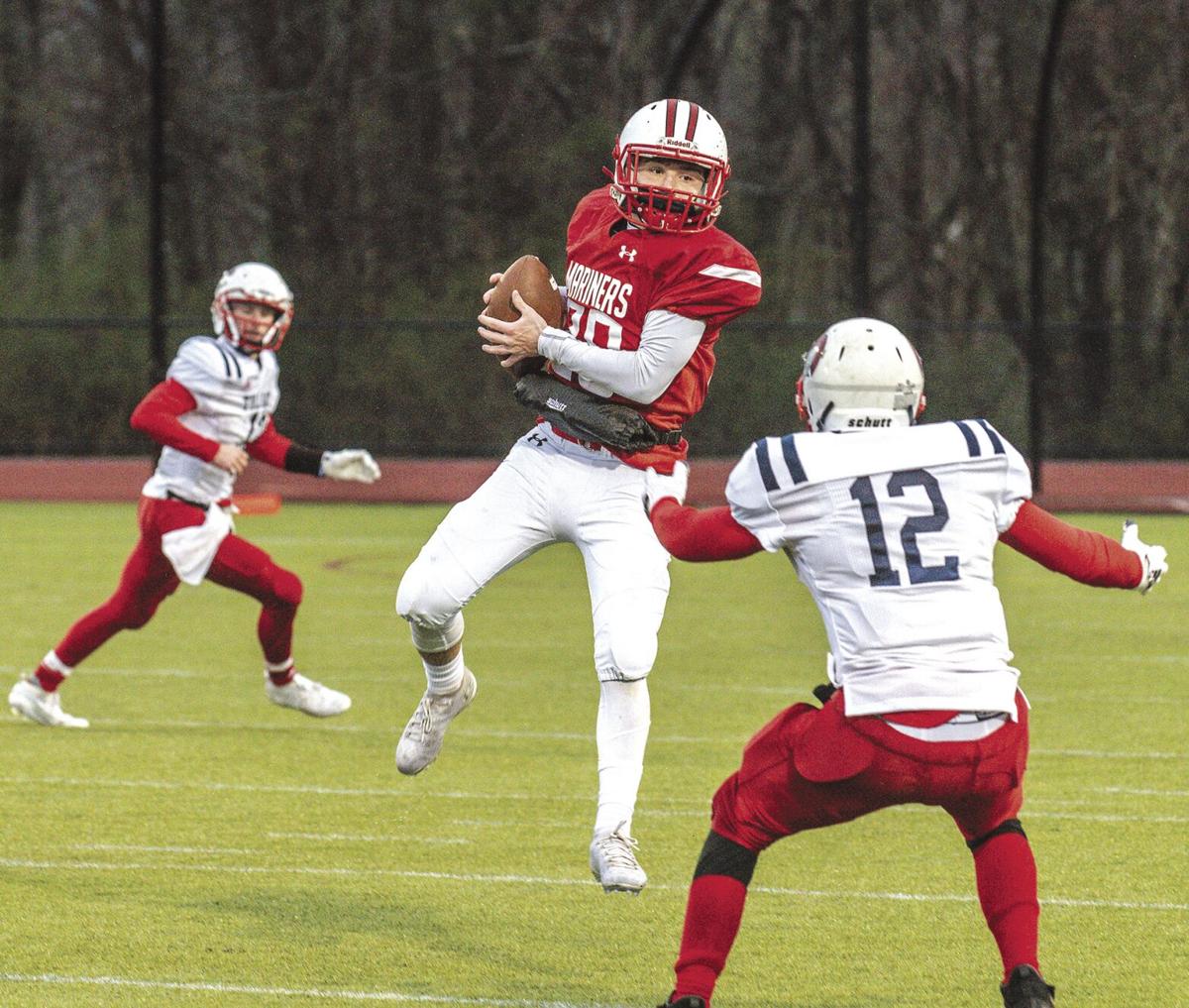 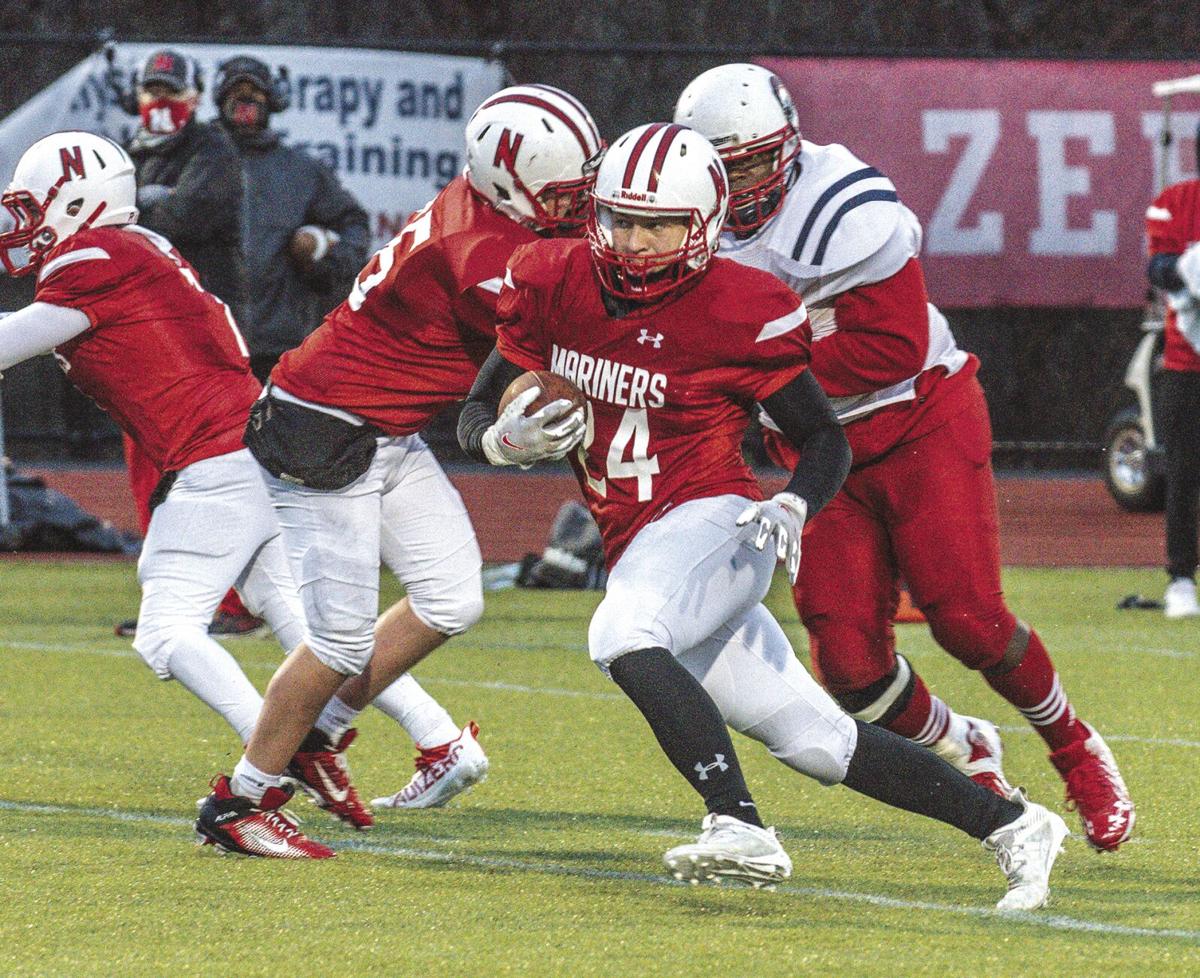 NARRAGANSETT — The Narragansett High School football team delivered the good start it was looking for, while still leaving a little meat on the bone for the future.

The Mariners scored on four consecutive possessions in the first half of Friday’s game against Toll Gate, then leaned on their defense in the second half to preserve a 28-6 win.

“For us, we talked about all week having a good start. We should have punched one in on the first drive, didn’t take advantage of the opportunity, but we bounced back well and put up four scores,” head coach Matt Blessing said. “We were very pleased with that. Our run game got on track. We were able to move the ball. But like we told the guys after the game, we might have won the first half 28-0 but they beat you 6-0 in the second half. So we’ve got to stay hungry.”

The win pushed the Mariners to 4-0 and locked up a top-two seed for the Division IV playoffs. With the short season, one game can have a significant impact on the standings, and a loss Friday would have allowed Toll Gate to leapfrog them for second place. As it is, Narragansett appears headed for the No. 2 seed, with fellow unbeaten Ponaganset likely getting the No. 1 spot due to the points allowed tiebreaker.

“We’ve been scouting Ponaganset, but we really didn’t want to overlook any opponent,” Blessing said. “The situation with today was, if we lose, we’re the three seed. It’s just game by game.”

The dominant first half allowed Narragansett to stay on track Friday. After their first drive stalled, the Mariners rolled. Phil Theroux hit Tyler Poirier for two touchdowns in the first quarter, one from 16 yards out and the other from 20 yards. Brady Butler’s 3-yard touchdown and the ensuing extra point by Lucas Masson made it 21-0. Reider Fry took handoffs on four of five plays in Narragansett’s final drive of the half and churned up 48 yards, capping the march with a 7-yard touchdown run.

“In the first half, we came out slow on the first drive,” Fry said. “As the game went on, our running game improved and that really helped us. I don’t think they were expecting it.”

Toll Gate threatened with a big play in the final seconds before halftime but Steven Kernick sacked Grayson Pasquina on the last play of the half.

Narragansett had two drives stall in the second half but used a strong defensive effort to stay comfortably in front.

Toll Gate scored on a 19-yard touchdown run by Domenic Calise that capped a long drive but was held scoreless the rest of the way. Sam Duckworth had a sack to help stop Toll Gate’s last drive.

Fry racked up 125 yards rushing as the Mariners had their ground game working better than it has all year.

“The key for us this year is just don’t give up,” Fry said. “Coming out strong, playing with confidence. We’re feeling great.”

Theroux totaled 109 yards passing, with Poirier and Kernick leading the pass-catching corps. A six-man senior class was honored in a pregame ceremony.

The Mariners are set to close out the regular season Friday night with a home game against Scituate.