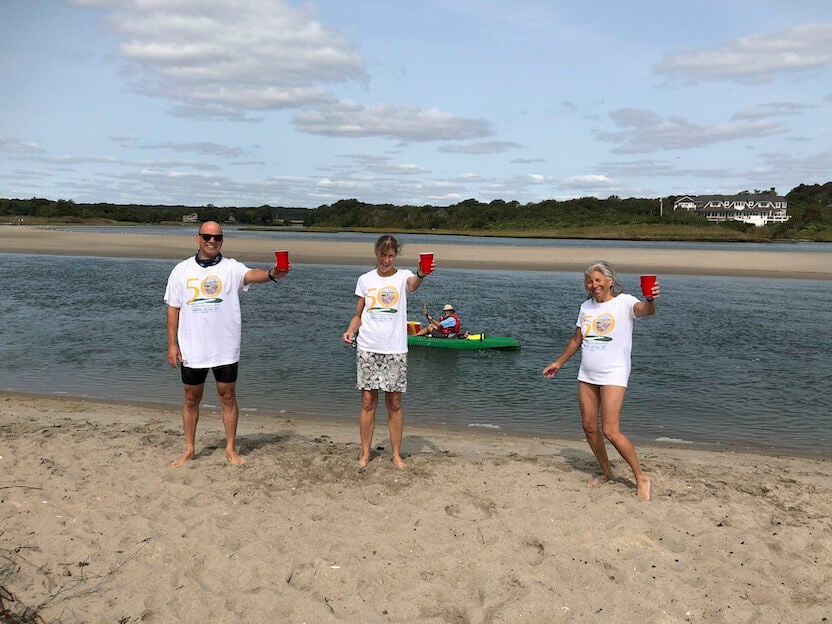 From left to right: Keith Ballard, Lori Pugh and Veronica Berounsky celebrate on the beach after finishing their swim. Jerry Prezioso, Berounsky's kayak spotter, paddles in the background. Photo courtesy of Alison Kates. 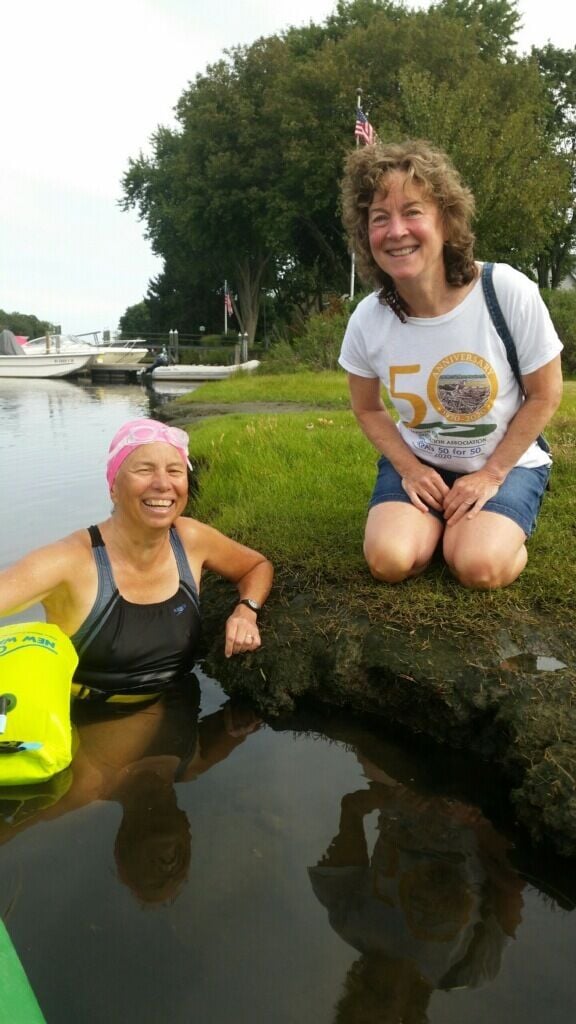 Veronica poses for a photo with her friend, Beth, at Mettatuxet. Photo courtesy of Jerry Prezioso. 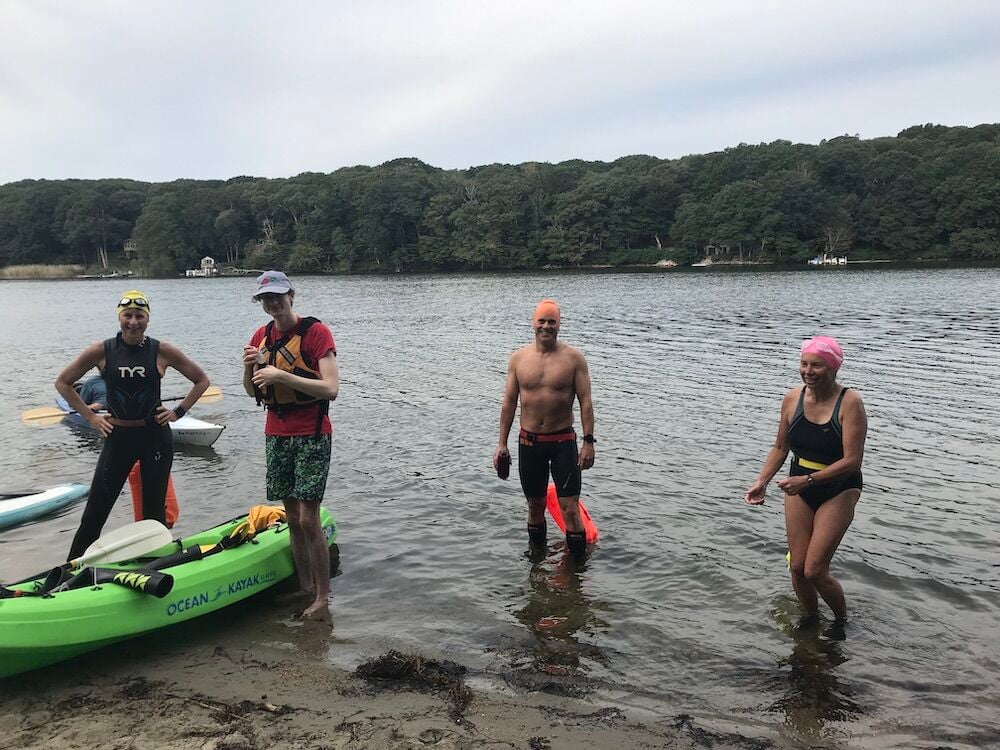 From left to right: Lori Pugh, along with her son and kayak spotter, Adam Pickard, pose for a photo with Keith Ballard and Veronica Berounsky. Photo courtesy of Stephen Hale. 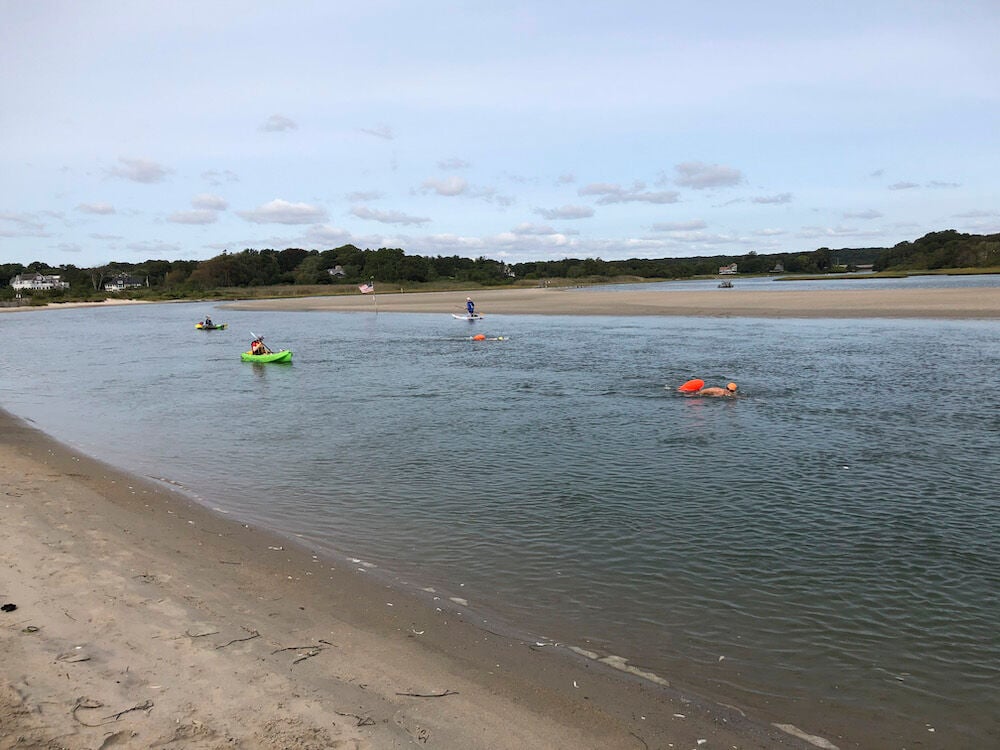 Lori and Keith paddle into the final stretch of their journey with kayak spotters close behind. Photo courtesy of Alison Kates. 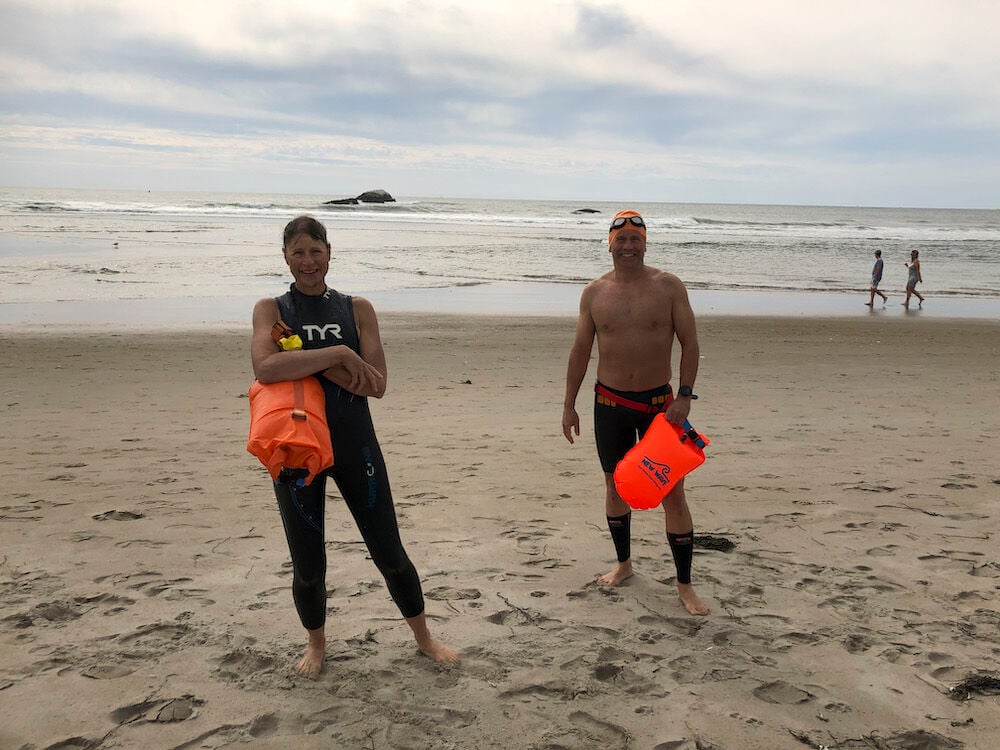 Lori and Keith pose for a photo shortly after finishing their six-mile swim. Photo courtesy of Alison Kates.

From left to right: Keith Ballard, Lori Pugh and Veronica Berounsky celebrate on the beach after finishing their swim. Jerry Prezioso, Berounsky's kayak spotter, paddles in the background. Photo courtesy of Alison Kates.

Veronica poses for a photo with her friend, Beth, at Mettatuxet. Photo courtesy of Jerry Prezioso.

From left to right: Lori Pugh, along with her son and kayak spotter, Adam Pickard, pose for a photo with Keith Ballard and Veronica Berounsky. Photo courtesy of Stephen Hale.

Lori and Keith paddle into the final stretch of their journey with kayak spotters close behind. Photo courtesy of Alison Kates.

Lori and Keith pose for a photo shortly after finishing their six-mile swim. Photo courtesy of Alison Kates.

NARROW RIVER – There have been kayaking expeditions, road races and cleanups, but in all the years that the Narrow River Preservation Association has been working to improve water quality, no one has ever actually swam the full length of the river.

No one, until last week, that is.

Last Monday, three local swimmers – Lori Pugh of North Kingstown, Keith Ballard of South Kingstown and Veronica Berounsky of Narragansett– made the lengthy journey from Upper Pond to the mouth of the river. The six mile trek, which makes its way through each of the swimmer’s communities, was a true testament to how much the Narrow River Preservation Association has been able to accomplish over the past 50 years, according to Pugh.

“Twenty-five years ago, the water was not what it is today,” Pugh said. “You’d think twice about swimming someplace like Narrow River.”

“I just really appreciate all the work that people have done over the years — and need to continue doing,” she added. “It’s an ongoing battle to keep the water clean. I’m glad to have contributed in some small way.”

The idea for swimming the entire length of the river came to Pugh after learning that due to health and safety concerns, the race she’d been training for wouldn’t be possible.

“I thought, ‘What am I going to create for myself in terms of an event so I’ll keep training throughout the summer and have some goals?’ There were plenty of times I was swimming in Upper Pond that I thought, ‘Wouldn’t it be great to go straight down to the ocean?’”

When she decided to create this new goal for herself, Ballard happened to be the person swimming next to her in Upper Pond at the time.

“Without giving it a lot of thought, I just said, ‘Sure, let’s do it,’” Ballard said.“And then afterwards, of course, I was thinking, ‘That’s about six miles, that’s a long way. What have I gotten myself into?”

The Wakefield Running owner, like Pugh, lives a very active lifestyle. While training this summer, he’d often swim with one group early in the morning, go for a bike ride and then return to the water with another group of swimmers. Ballard said he trained like this nearly every day, but swimming wasn’t rough on his legs the same way hiking, running marathons and training for triathlons has been.

At first, the swim was only going to be the two of them — something they’d do quietly to help celebrate the Narrow River Preservation Association’s 50th anniversary — but it became something much larger when Berounsky became part of the picture.

As a marine research scientist at the University of Rhode Island Bay Campus, Berounsky became invaluable in planning the perfect time and date for the swim. By leaving nothing to chance, they were able to time their swim to work with the tides, rather than struggling against it.

Berounsky, who also serves as the vice president of the NRPA, brought a lot of attention to the event, according to Ballard. Having lived on the river for decades and knowing so many members of the community, there was plenty of moral support along the way.

Although Pugh said she was so focused on the swim to notice, both Berounsky and Ballard said it was nice to see some friendly, encouraging faces along the way.

“We weren’t really expecting any of that,” Ballard said. “This was something we were doing, it was something of low key, we figured “That’d be nice if it could raise a little bit of money.’”

“We had no idea this was going to raise upwards of  $2,000,” he added. “It was really something we were doing to celebrate the river and have an adventure.”

During his six mile swim, Ballard said he was thoroughly impressed by the water quality. Making his way through a river that wasn’t always the cleanest place to be, he was amazed not to find any trash, strange odors or anything of the sort.

“The water quality was amazing,” he said. “They’ve done a great job over the years to help improve the quality of the river.”

Because of her academic and professional background, Berounsky found it fascinating to see how much the riverbed changed over the course of the swim.

“It was interesting for me, as a biologist and ecologist, swimming along watching the bottom of the river,” she said.”It was really kind of fun, seeing the differences in the biology as I swam through.”

Not only was this a lesson in physics for her, to find the perfect time and ideal conditions for their swim, but it also became a lesson in biology.

“When [Berounsky] finished she had four different shellfish that she collected along the way,” Ballard said with a laugh. “She knew what each species was and why they competed in different parts of the river.”

All three of the swimmers had a good time raising awareness and funds for the Narrow River Preservation Association, and expressed words of gratitude to everyone who made this momentous milestone celebration possible, but Berounsky’s swim also raised awareness for Donate Life.

Nearly six years ago, Berounsky donated one of her kidneys to her cousin. Fortunately, they were a match, and the procedure helped save his life.

And while there are many misconceptions out there that donating a kidney will limit you athletically, Berounsky said she’s living proof that life with one kidney isn’t all that different from life with two.

“I can swim six miles with one kidney, and I did just fine,” she said with a laugh.

In addition to encouraging her fellow community members to be good stewards to our waterways, Berounsky hopes her swim encourages others to give the gift of life.