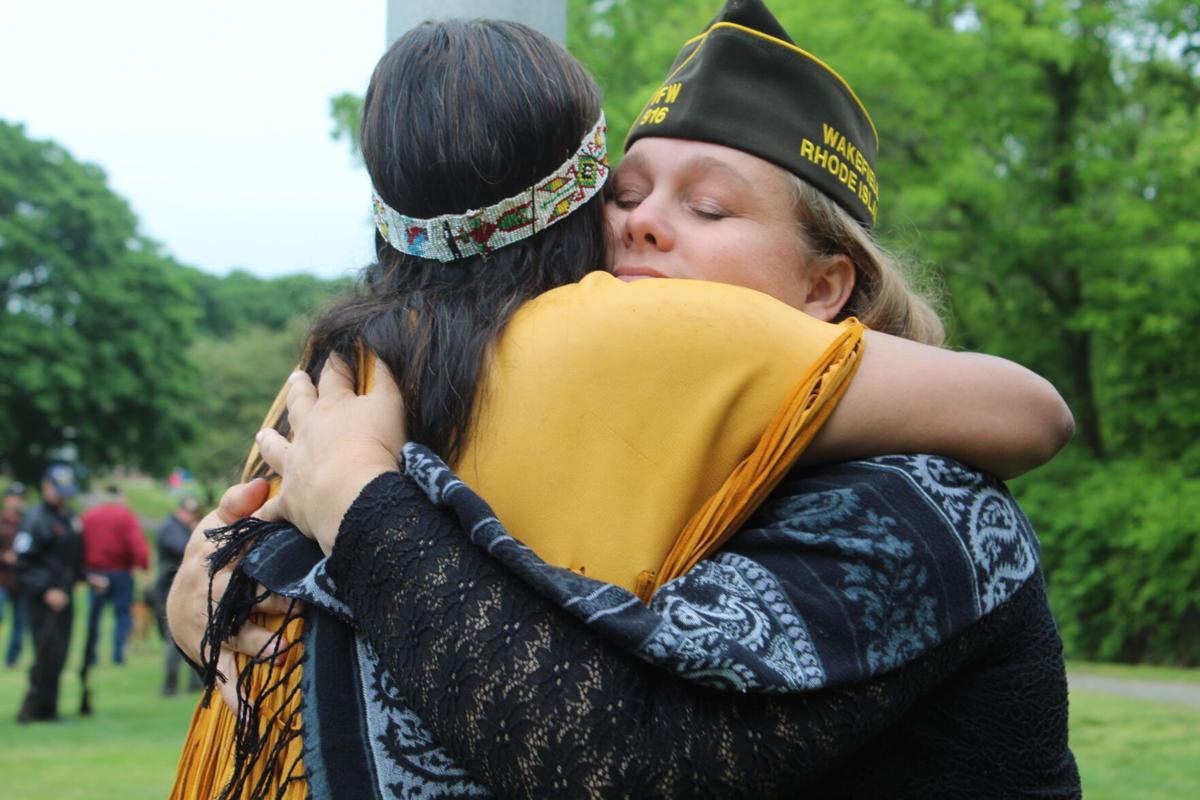 Maija Hill and Tricia Boucher share an emotional hug after serving as the first women in the town’s history to participate in the wreath laying ceremony. 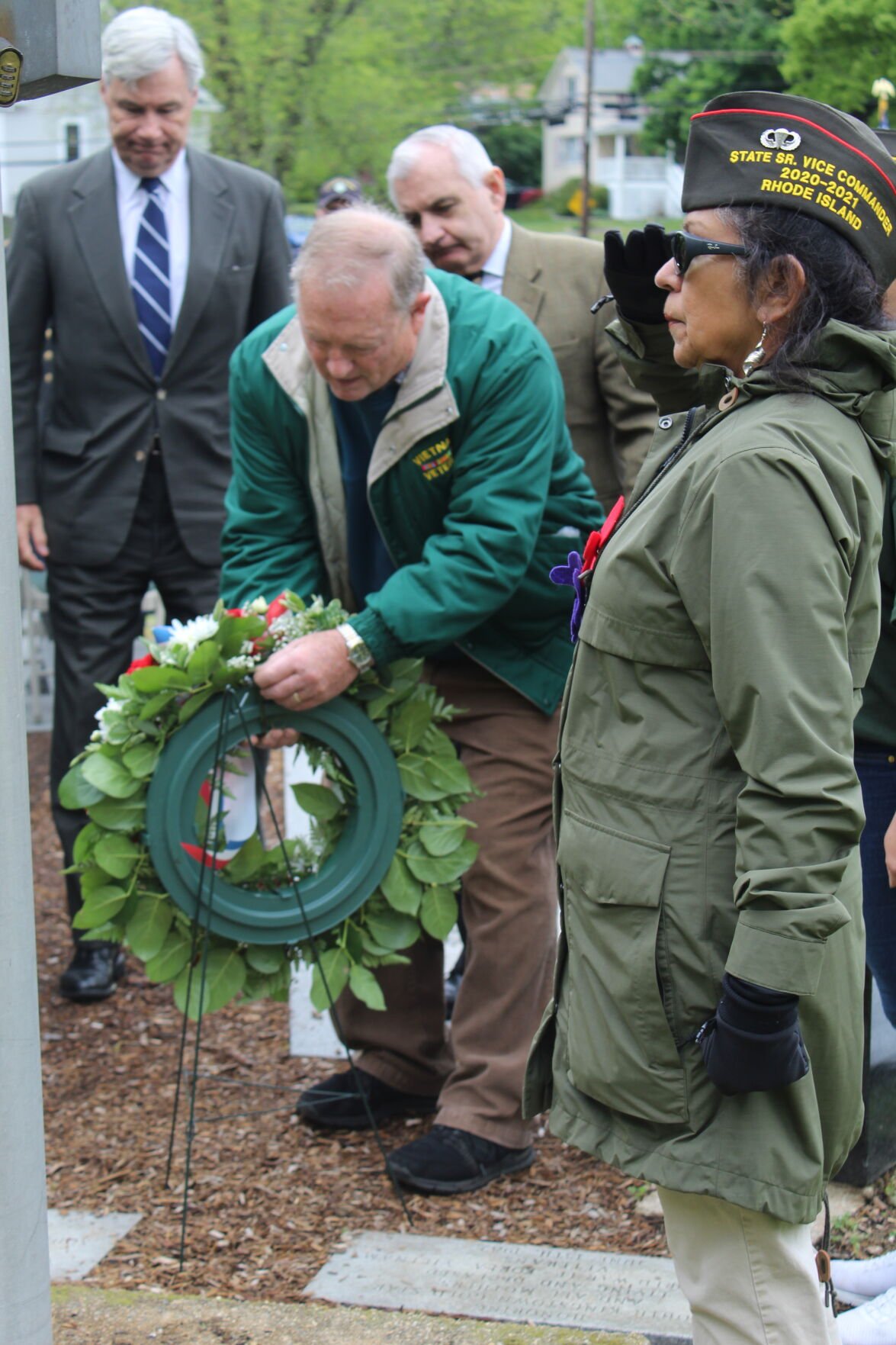 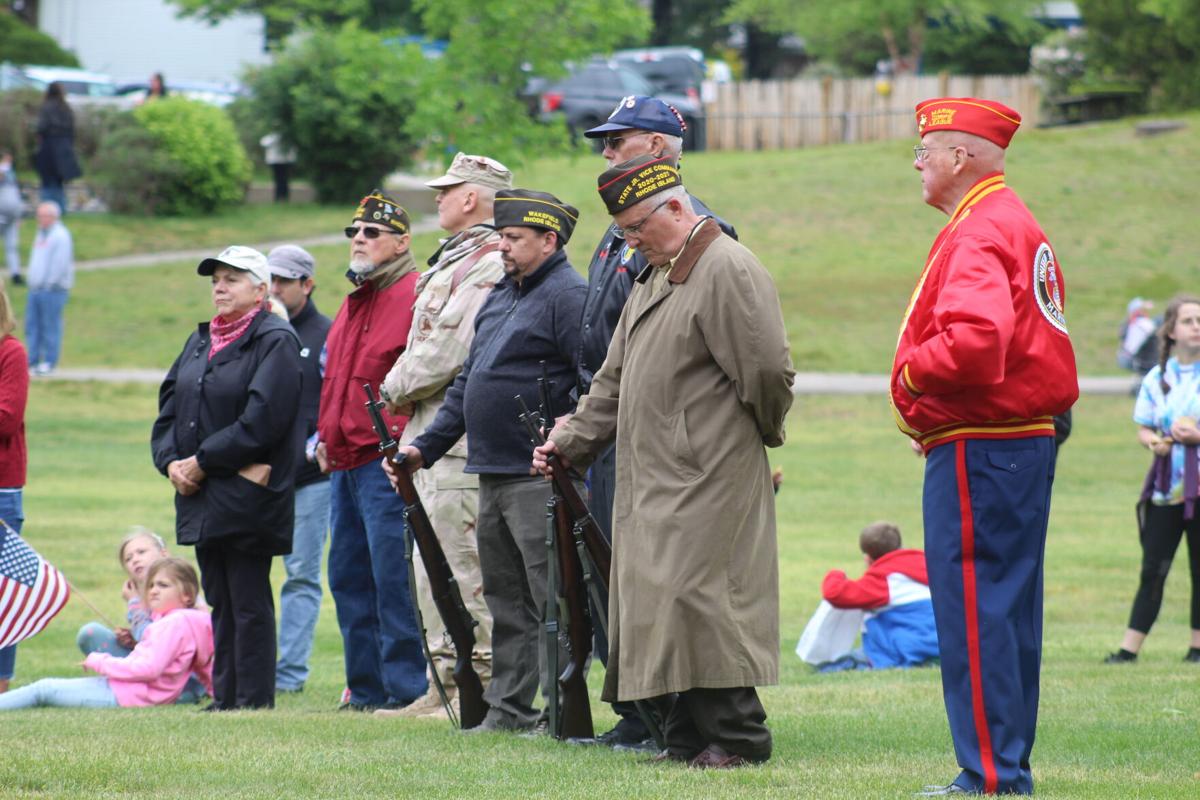 During the annual Memorial Day Parade and Ceremony in South Kingstown, local veterans and families paid their respect to the fallen. 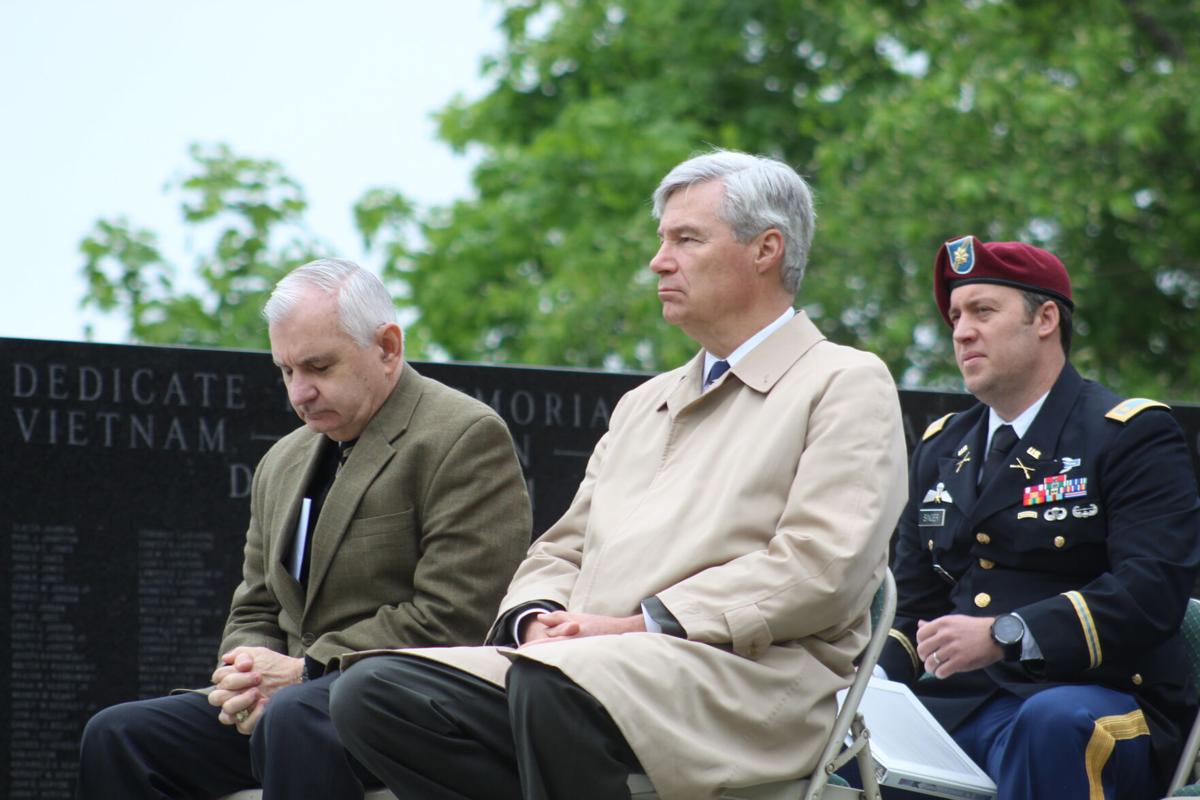 Senators Jack Reed and Sheldon Whitehouse share a somber moment of remembrance for local, fallen heroes. Behind them, Maj. Caleb Singer of the Rhode Island National Guard would later deliver the keynote address. 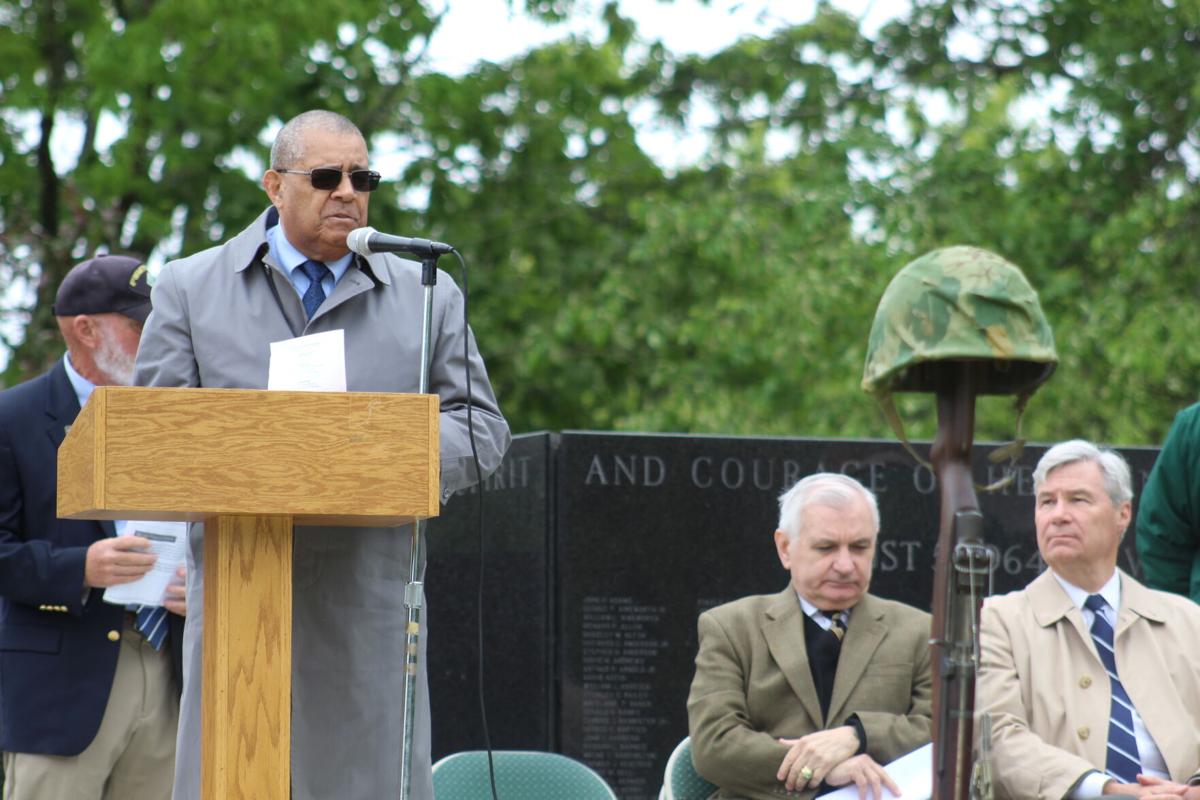 Bishop Wallace Hazard offers up a prayer in remembrance and gratitude to those who've lost their lives in uniform.

Maija Hill and Tricia Boucher share an emotional hug after serving as the first women in the town’s history to participate in the wreath laying ceremony.

During the annual Memorial Day Parade and Ceremony in South Kingstown, local veterans and families paid their respect to the fallen.

Senators Jack Reed and Sheldon Whitehouse share a somber moment of remembrance for local, fallen heroes. Behind them, Maj. Caleb Singer of the Rhode Island National Guard would later deliver the keynote address.

Bishop Wallace Hazard offers up a prayer in remembrance and gratitude to those who've lost their lives in uniform.

WAKEFIELD – It wasn’t one of the most widely attended Memorial Day celebrations in town history, but it was definitely one of the most memorable tributes to fallen heroes.

After more than a year of social distancing, mask wearing, and virtual gatherings, community members were able to reclaim some sense of normalcy as they watched the parade pass down Main Street. Although it rained for the vast majority of the holiday weekend, there was a small reprieve that morning, long enough for both the parade and the ceremonial wreath laying.

Rory McEntee delivered remarks on behalf of his fellow council members during the ceremony at Saugatucket Park, where he encouraged the entire community at large to remember those who’ve paid the ultimate price in service to this country.

“The service members we honor today came from all walks of life, but they shared several fundamental qualities,” he continued. “They possessed courage, pride, determination, selflessness, dedication to duty and integrity. They rose to the call to protect a nation that had given them, us, so much.”

Reed delivered a similar message on the importance of remembering our fallen service members, as well as the family members they were never able to come home to.

“It’s a day when we stop and remember those who have given their all to this nation – those who have served and sacrificed,” Reed said. “And their families also, because no one serves alone in the military.”

The holiday dates back to the years following the Civil War, which claimed more lives than any other conflict in our nation’s history, and has been observed for more than 150 years. The somber occasion is meant to allow time for remembrance and thanks to fallen men and women in uniform.

“We have come together to recognize their sacrifice and recommit ourselves to their commitment to this nation,” Reed said. “Their service and sacrifice has provided us with opportunity, provided us with the chance to be here this morning.”

“These men and women did not fight for glory or honor, or reward – they fought so we could be here,” Reed went on as children played off in the distance on the playground. “I think they would be very, very pleased to hear in the background the sound of children laughing. They fought for that too.”

Though many familiar faces were present for the ceremonial laying of the wreath, including parade grand marshals Tony DiMichele and Harry Schleicher, there was one person of note missing.

VFW Post 916 Commander Joe “Tiger” Patrick took a few moments to recognize Lt. Col. James Haldeman of the United States Marine Corp, who for many years, served as master of ceremonies and delivered keynote addresses on behalf of those still in uniform on Memorial Day and Veteran’s Day. After he recently moved away from southern Rhode Island to be closer to family, Maj. Caleb Singer of the Rhode Island Army National Guard stepped in to mark the somber occasion.

To those in attendance, he requested they “remember those who made your tomorrow.”

“We’ve experienced the tremendous spirit of our service members who are willing to lay down their lives and sacrifice themselves to protect their yellow war fighters, their fellow citizens, friends and family,” Singer said. “Today we celebrate and remember those who did make the ultimate sacrifice in defense of this nation.”

“From the memory of these honored fallen, let us recommit ourselves to never forget the sacrifice of these patriots,” he added.

Rhode Island VFW Commander Dora Vasquez-Hellner and VFW Post 916 senior leaders Jennifer Whitworth, Maija Hill and Tricia Boucher had the honor of being the first woman to ever participate in the town’s wreath lay – something normally reserved for political dignitaries and high ranking officers of the military, according to Patrick.

Now, the country has reached a time when women of high rank in military organizations, like the Veteran’s of Foreign Wars.

All four women held a proud salute to the flag during the wreath lay, afterwhich Hill and Boucher were seen sharing an emotional hug to mark the bittersweet moment.

Bishop Wallace Hazard, who offered up a prayer in remembrance of those who lost their lives in the line of service encouraged his fellow South Kingstown residents “to pay tribute to these great men and women who sacrificed their lives, that we might have our freedom.”

“They sacrificed for us,” he added. “Let us never forget that.”