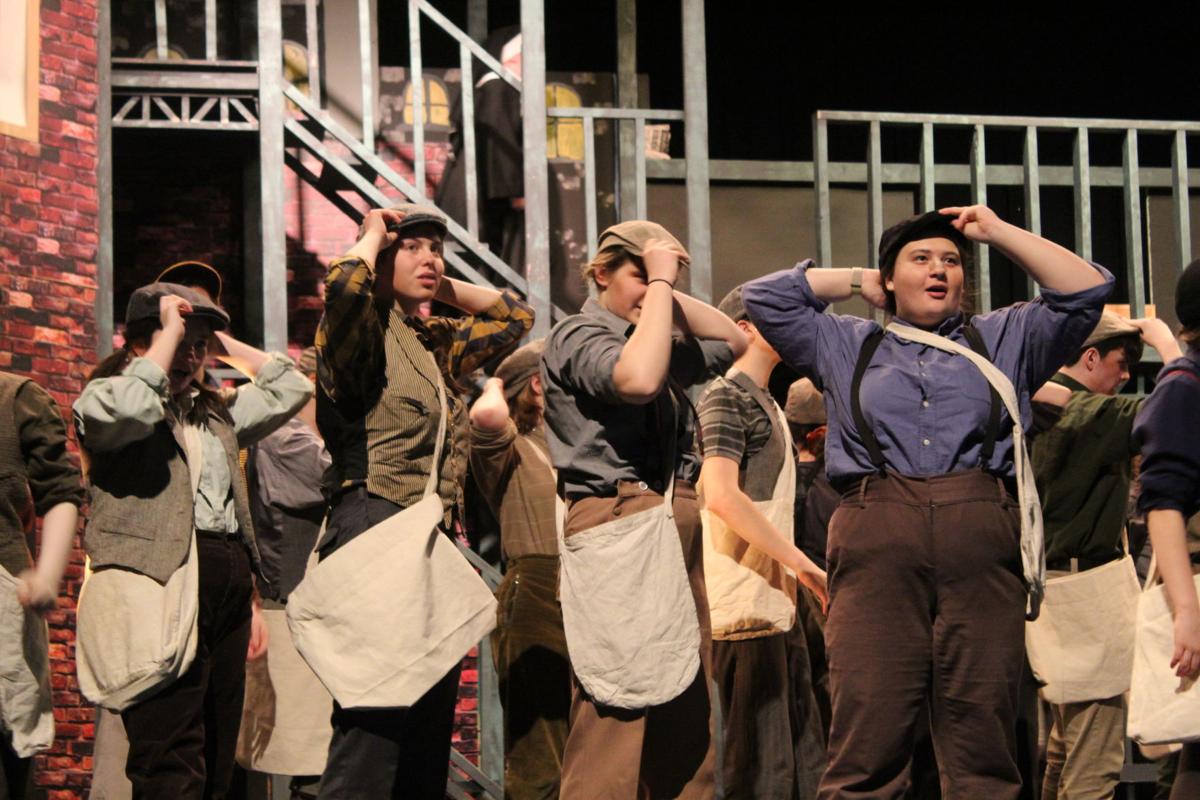 South Kingstown High School students in the Rebel Theater Group rehearsed Monday afternoon for their upcoming performances of “Newsies.” The show will begin Thursday at 7 p.m. Additional performances will be held the following three nights on Friday, Feb. 7, Saturday, Feb. 8, and Sunday, Feb. 9. 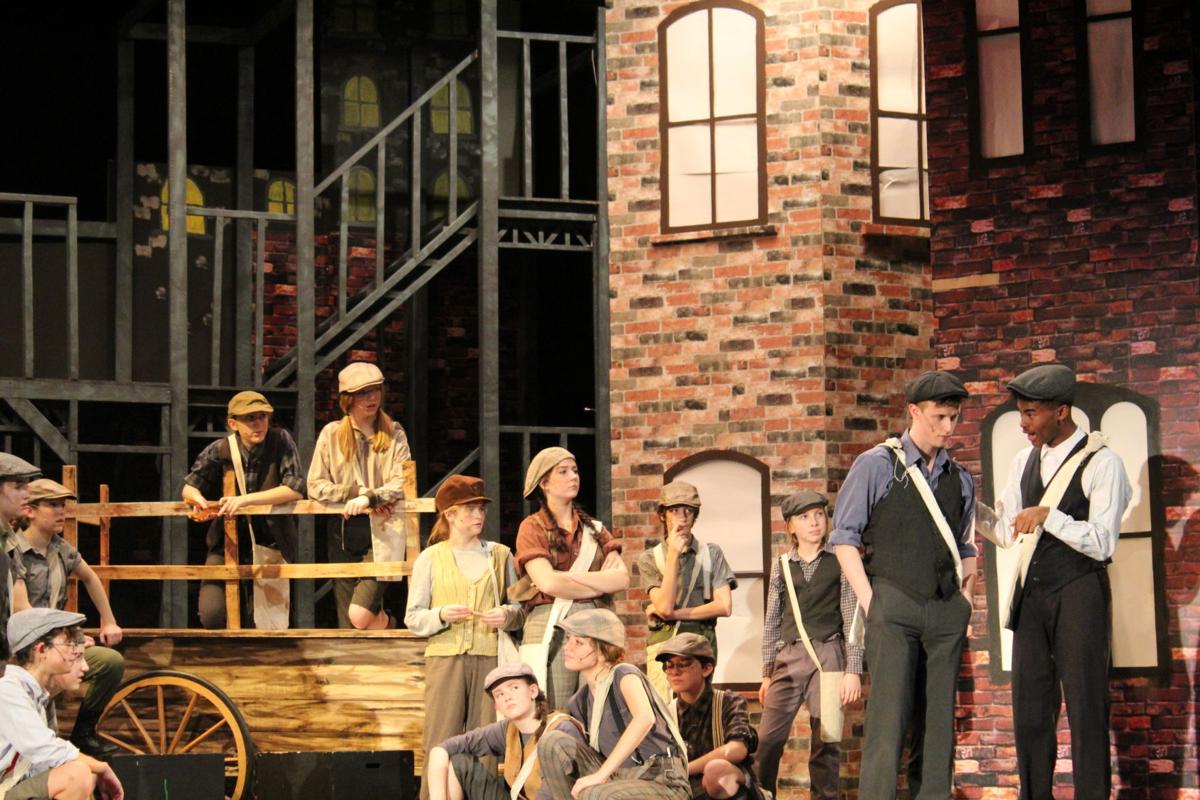 South Kingstown High School students will be bringing the 1899 Newsboys Strike alive this weekend, telling the unlikely story of some of New York Cities youngest workers taking down the most powerful newspaper publisher of their time.

South Kingstown High School students in the Rebel Theater Group rehearsed Monday afternoon for their upcoming performances of “Newsies.” The show will begin Thursday at 7 p.m. Additional performances will be held the following three nights on Friday, Feb. 7, Saturday, Feb. 8, and Sunday, Feb. 9.

South Kingstown High School students will be bringing the 1899 Newsboys Strike alive this weekend, telling the unlikely story of some of New York Cities youngest workers taking down the most powerful newspaper publisher of their time.

SOUTH KINGSTOWN — Between the dozens of students singing and dancing up on stage, playing in the orchestra below, or working behind the scenes on sound, lighting or set design, more than 100 students came together to make the Rebel Theater Group’s production of “Newsies” possible.

The large-scale production is filled with exciting musical numbers, according to South Kingstown High School Choral Music and Theater Director Ryan Muir, which complement the talents of his students nicely.

As the actors on stage prepare for opening night this Thursday, others are busy checking microphones, making last-minute alterations to costumes and placing markers on stage. All of which would not be possible without the efforts of the entire school community at large, which senior Clark Swanson, 18, understands better than most.

“The sets were actually made by my very talented father, Mr. Swanson, who’s the carpentry teacher,” Swanson said. “He and his classes put a lot of work into these sets.”

The quality and detail that was put into the set, from the brickwork, windows and scaffolding, is far above the normal quality of your typical high school musical production.

“I think the set design really, really came out stellar,” he said.

Audience-goers are in for an amazing show, but Swanson thinks that everyone will be able to appreciate the amount of work that happened off stage to help make this production possible. All of the things that needed to happen before opening curtain really brings the entire school together, Swanson said, which is really neat.

While Mr. Swanson was busy building the sets, his son was hard at work learning lines for his first-ever production. Thanks to some coaxing and encouragement from Muir, Swanson decided to audition for the musical’s lead antagonist — newspaper publisher Joseph Pulitzer.

“Newsies” follows the real-life story of the 1899 Newsboys Strike, according to senior Henry O’Brien, 18, in which “a bunch of raggamuffin kids took down Joseph Pulitzer and William Randolph Hearst.”

When prices of newspapers were hiked, placing even more of a hardship on the newspaper boys hawking them on the streets of New York City, they decided to stand together and strike.

“It’s about kids who’ve never had a voice in their life finally getting a voice, and the world actually paying attention,” O’Brien said.

This weekend, O’Brien will star in the leading role of Jack Kelly — a role he’s been dreaming about for more than a decade. Helping to lead the team of “raggamuffin kids,” Jack Kelly stands beside his fellow newsies to ensure that their voices get heard and working conditions improve.

O’Brien promises that this will be unlike any other production of “Newsies” the audience has ever seen — which is saying a lot, considering the production’s growing popularity in recent years.

Playing the part of young newspaper reporter Katherine Plumber, who becomes instrumental in helping the newsies have a voice and a fighting chance against the city’s most powerful publishers, is senior Caroline Parente, 17, who feels a strong connection to the role she plays on stage.

In the future, she hopes to become a reporter herself. Next year she hopes to study broadcast journalism and musical theater, so this role has truly blended her two passions. Playing the role of Katherine — a strong, female journalist at a time when women were a rarity in the newspaper industry — has been inspiring.

For those coming to the show this weekend, audience-goers can expect to see a lot of personality up on the stage. So many newsies have been squeezed into the production that it’s becoming a fire hazard, Parente joked.

Junior Carter Santos, 16, who’ll be playing the part of Davey Jacobs, a relatively new newsie who unintentionally suggests forming a strike for fair pay, said audience members will go home feeling like anything is possible.

The youngest cast member, Easton Schroeder, 12, will be playing the part of Les Jacobs — Davey’s younger brother. The Broad Rock Middle School student decided to audition for the role despite not having much previous theater experience. His experience so far, surrounded by students several years older, has been extremely positive.

The Rebel Theater Group will debut their opening performance of “Newsies” this Thursday at 7 p.m. Additional performances will be held the following three nights on Friday, Feb. 7, Saturday, Feb. 8, and Sunday, Feb. 9.

Tickets may be purchased at the door or online at www.onthestage.com/show/rebel-theater-group/newsies-50511/tickets.