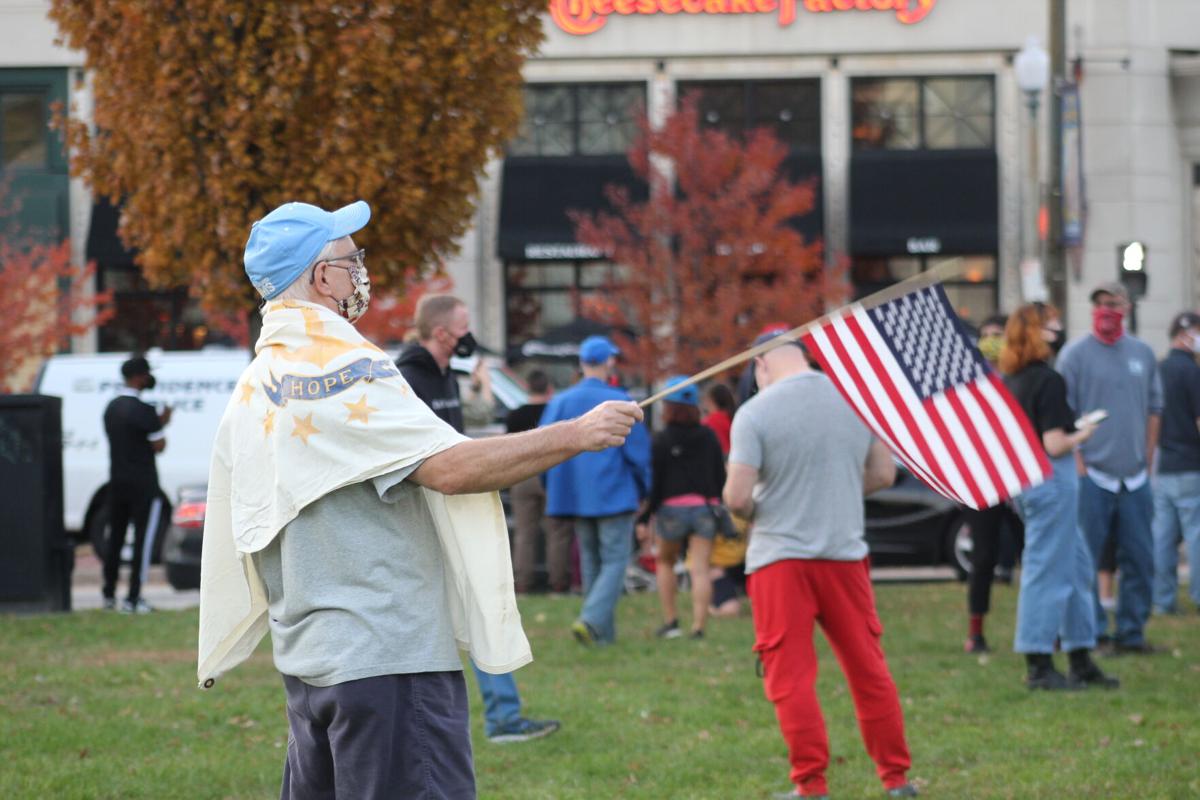 A crowd gathered near the Statehouse Saturday after news broke that Joe Biden is the projected winner of the presidential election. 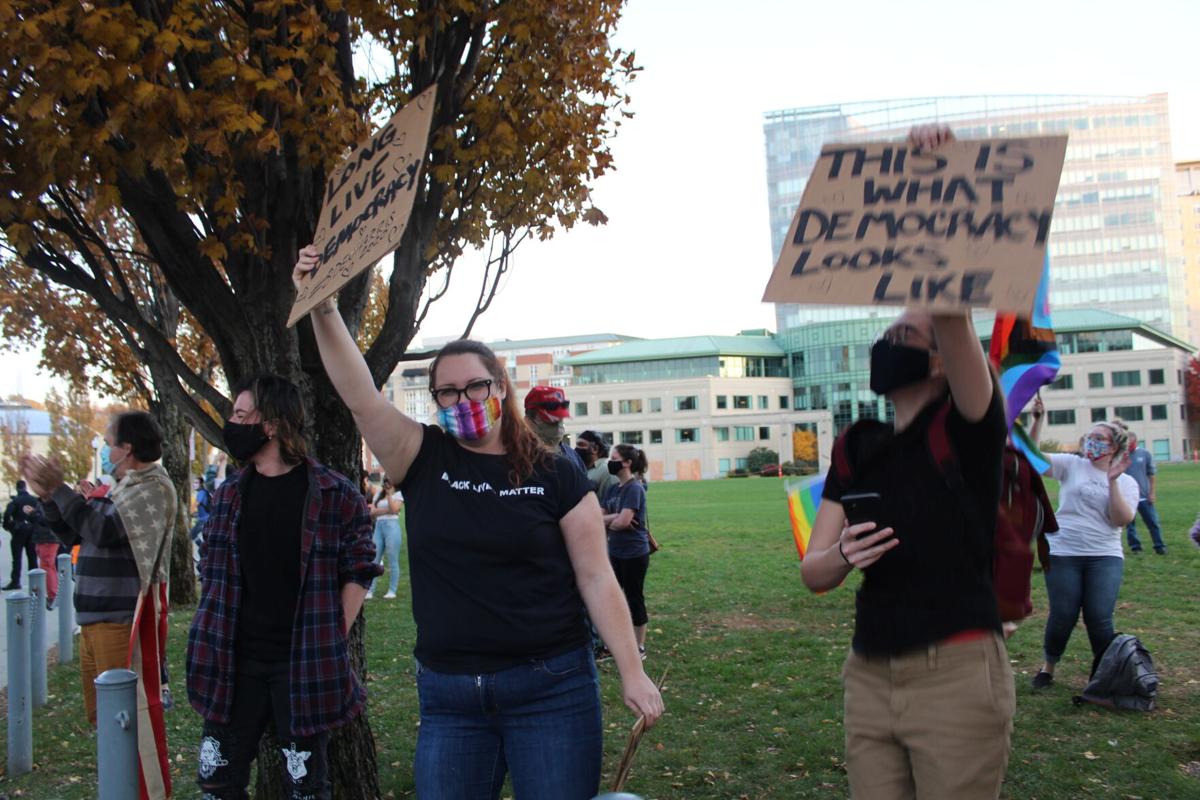 A crowd gathered near the Statehouse Saturday after news broke that Joe Biden is the projected winner of the presidential election.

RHODE ISLAND – When news that Joe Biden is projected to be the next president of the United States broke on Saturday afternoon, celebrations erupted in major cities all across the country, from Los Angeles to Times Square in New York City.

In Rhode Island, those celebrations were seen on a much smaller scale, but during the last few hours of daylight, a crowd of about a hundred people were gathered in downtown Providence, near the Statehouse.

Small groups of people gathered together as flags were being flown, music played and signs waved.  The small, impromptu celebration was greeted by honking horns and cheers as drivers made their way down Gaspee Street.

“I am thrilled to congratulate President-elect Biden and Vice President-elect Harris on this historic victory,” Gov. Gina Raimondo wrote in an official statement on Saturday. “The American people have spoken in record numbers. Before us is a once-in-a-generation opportunity to build back better – to create an America where everyone has access to high-quality healthcare, affordable education and economic opportunity.”

“There is no question that Joe Biden is the right leader for this moment,” she added.

Those same sentiments are not shared by everyone, however, and the current president still garners much support from voters across the nation and across the state.

While Biden was able to capture more than 300,000 votes from the Ocean State, according to the Rhode Island Board of Elections, President Donald Trump was able to earn just shy of 200,000 votes. In other states, the difference between a clear winner or loser wasn’t as large.

Trump has launched legal challenges in a number of states, including Pennsylvania and Georgia, claiming evidence of election fraud. Some of his supporters have also begun to question the integrity of the election, especially when it comes to the mail ballot vote – which heavily favored Biden.

Trump continues to throw doubt on the security of the election, and has continued to tweet that he won the election “by a lot.”

Questions of election integrity are also being raised here in Rhode Island. Three Republicans, all of whom failed to win a seat in the state legislature, have mounted complaints with the board of elections.

Charles Callanan of East Greenwich, who made an unsuccessful run for state senate with hopes of replacing Sen. Bridget Valverde (Dist. 35 – East Greenwich, North Kingstown, South Kingstown, Narragansett), is among those questioning the integrity and transparency of mail ballot voting.

In a letter written to Robert Rapoza, who serves as the executive director of the Rhode Island Board of Elections, Callanan requested “validation/certification/inspection of all mail-in ballots reviewed” in the election between himself and Sen. Valverde.

“It was stated many times by various RI officials that the purpose of mail in ballots was to ensure no RI citizens were denied their right to vote,” Callanan wrote. “By this same logic, the people and the candidates of Rhode Island deserve to know that the ballots cast in this election were indeed valid.”

“Since contacting your office via phone and in person, I have been told no such procedure exists to ensure these ballots were true,” he went on. “Before they are certified, we the people need to know if their wishes were carried out properly.”

According to the Rhode Island Board of Elections, between polling place, mail and emergency ballots, Callanan received 7,479 votes – 1,880 votes less than his opponent.

Scott Zambarano of Warwick, who also made an unsuccessful run for the state senate and came in 1,351 votes behind his Democratic challenger, submitted a nearly identical letter. The only difference was that he requested the board of elections look into the mail ballots submitted in the race for Senate Dist. 31 (Warwick).

In a screenshot shared by Callanan, a similar message seems to have been shared by former Rep. Anthony Giarrusso (Dist. 30 – East Greenwich, West Greenwich), after coming in 389 votes behind incumbent Rep. Justine Caldwell. In his letter, Giarrusso raises concerns over the “statistically improbable” turnout.

“I have no problem accepting defeat when the game was played fair and square,” Giarrusso wrote. “However, this past election seems to be far from a fair election.”

“I trust that you will want to do everything in your power to preserve the republic,” he continued. “And free and fair elections are the central nervous system of a thriving republic, anything but is a banana republic.”

The North Kingstown Republicans are also officially contesting some local and statewide elections.

“There’s no other way to convey this, but at this point in time, we have sound reason to believe that with the help of voter harvesting techniques, Tuesday’s election results may not have been representative of either the town base or even the intended voters themselves,” the group wrote in a Facebook post last Thursday. “We have no further information at this point, but will keep our residents informed as we proceed.”

According to Rhode Island Secretary of State Nellie M. Gorbea, Rhode Islanders turned out in record numbers last week, with over 507,000 votes cast across the state. Whether Rhode Islanders voted at the polls, from home or at their local city or town hall, Gorbea stressed the safety and security of the election.

“It’s appalling to see partisan attacks that try to undermine our institutions and our faith in democracy,” Gorbea said in a video statement on Friday, speaking specifically to the presidential election. “While this can all seem a bit overwhelming, I know that these efforts will not succeed.”

“I have faith in the countless numbers of election officials who are doing their jobs and ensuring all votes are counted,” she added.

Ahead of the presidential election results, Gorbea urged everyone to stay calm.

“As election officials from both sides of the political aisle have stated for months, accurate results will take time,” she wrote in an email message that same day. “This is not a sign of anything nefarious.”

“There are several layers of security in place to ensure that Rhode Islanders and Americans can trust the integrity of our elections,” she added.

As of Tuesday morning, four states have yet to be called, but both Pennsylvania and Nevada have gone to the president-elect. At the moment, Biden holds a narrow lead over Trump in Georgia and Arizona.