You are the owner of this article.
Edit Article Add New Article
Home
News
Sports
Letters to the Editor
Timeout
Multimedia
Features
Classifieds
Obituaries
1 of 8 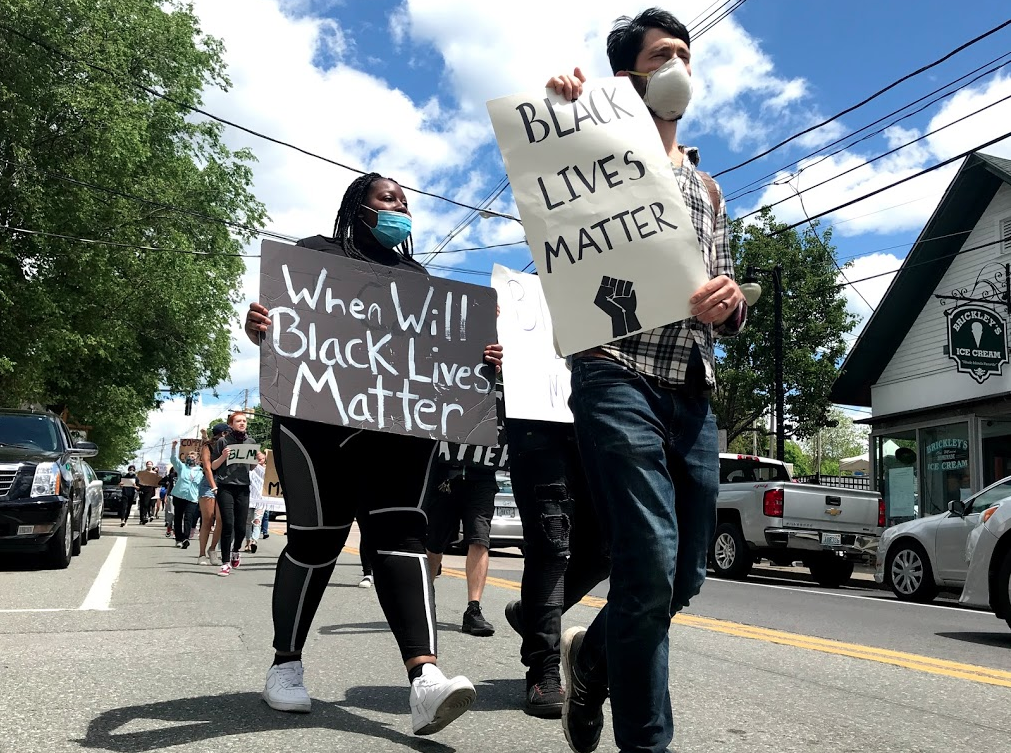 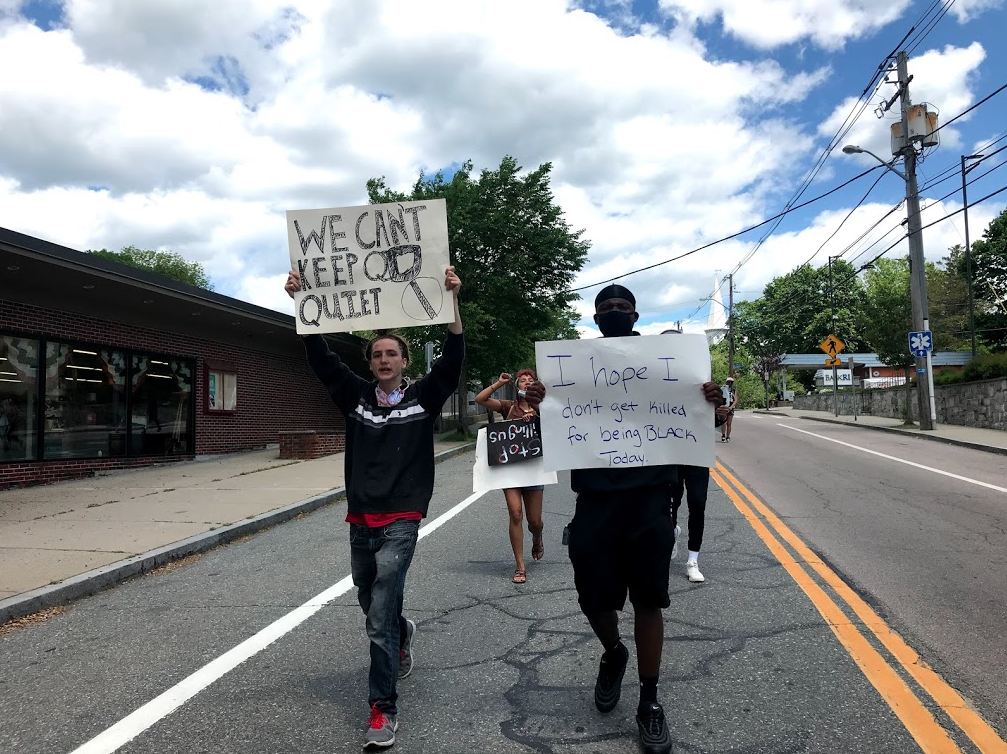 South Kingstown resident Myshon Coppock (right) holds up a sign that reads “I hope I don’t get killed for being black today.” 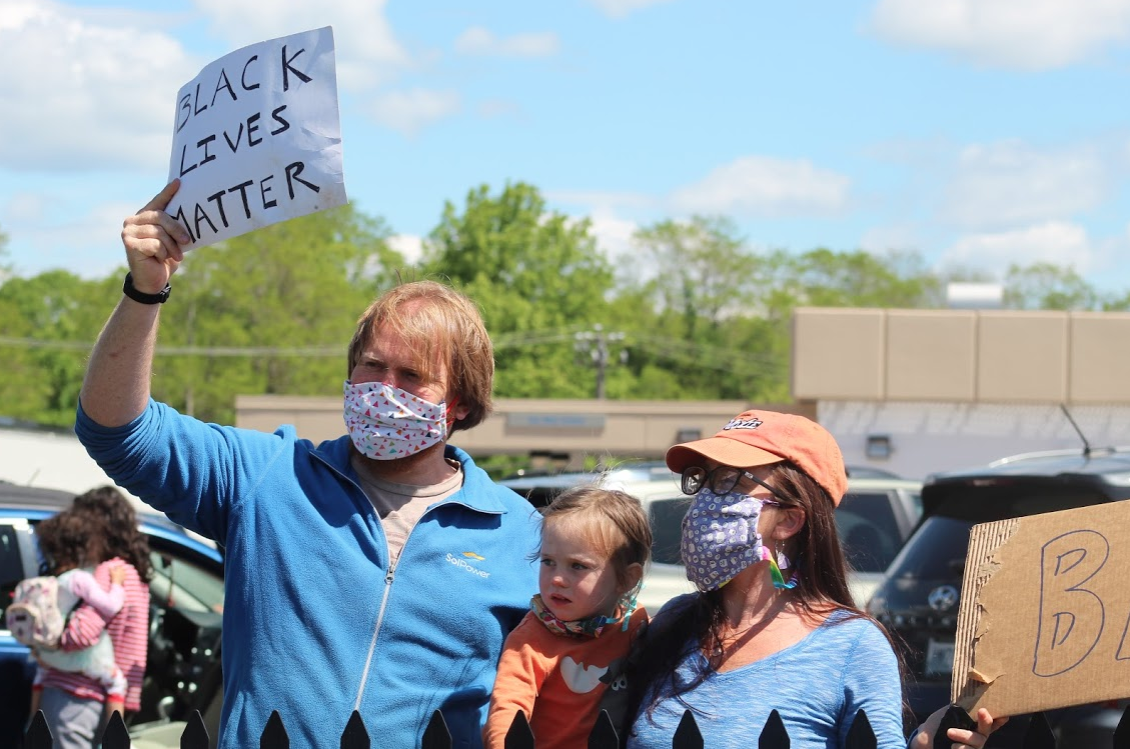 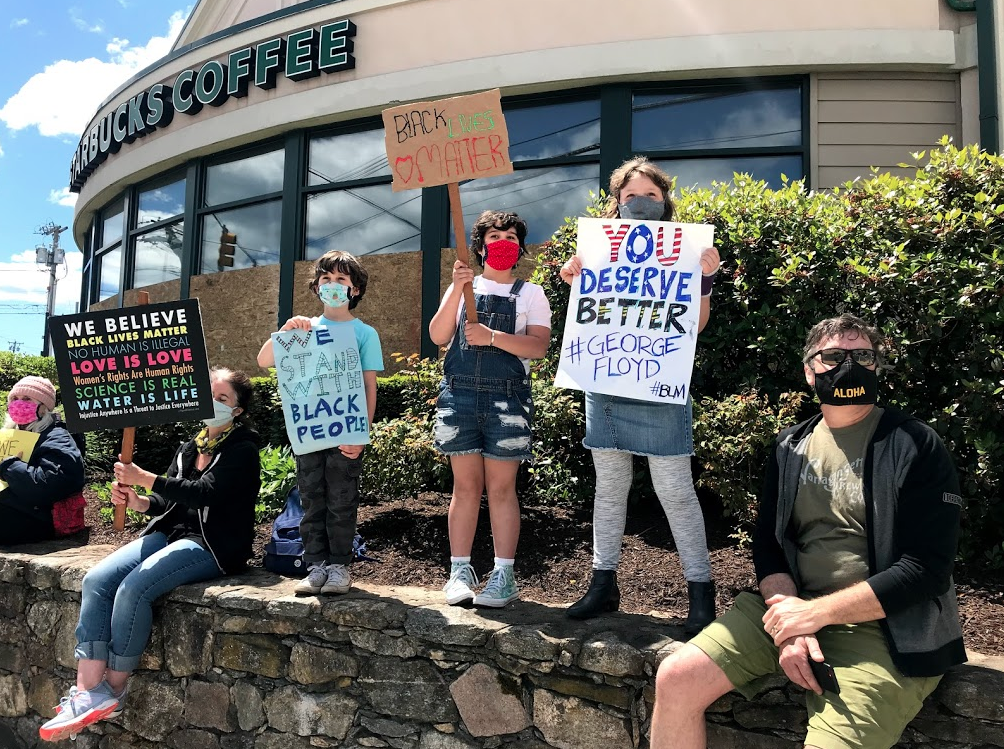 A group of young children wave their signs at Dale Carlia Corner on Monday. 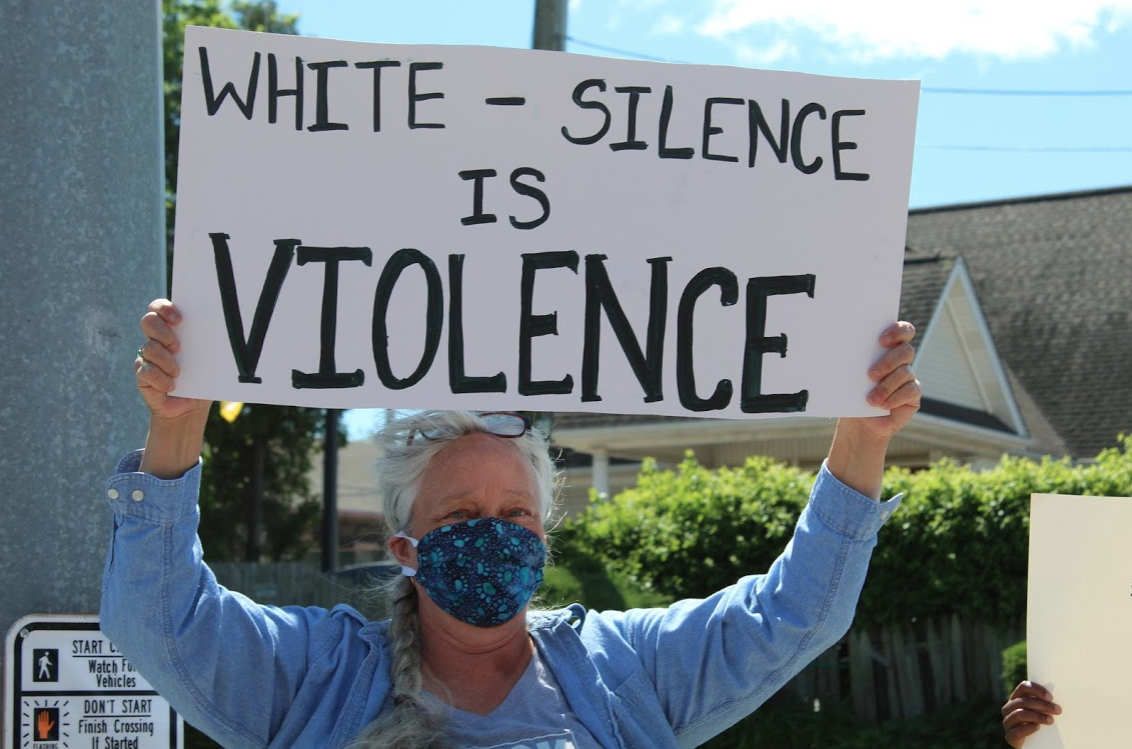 A woman holds up a sign at Dale Carlia Corner on Monday in support of the Black Lives Matter movement. 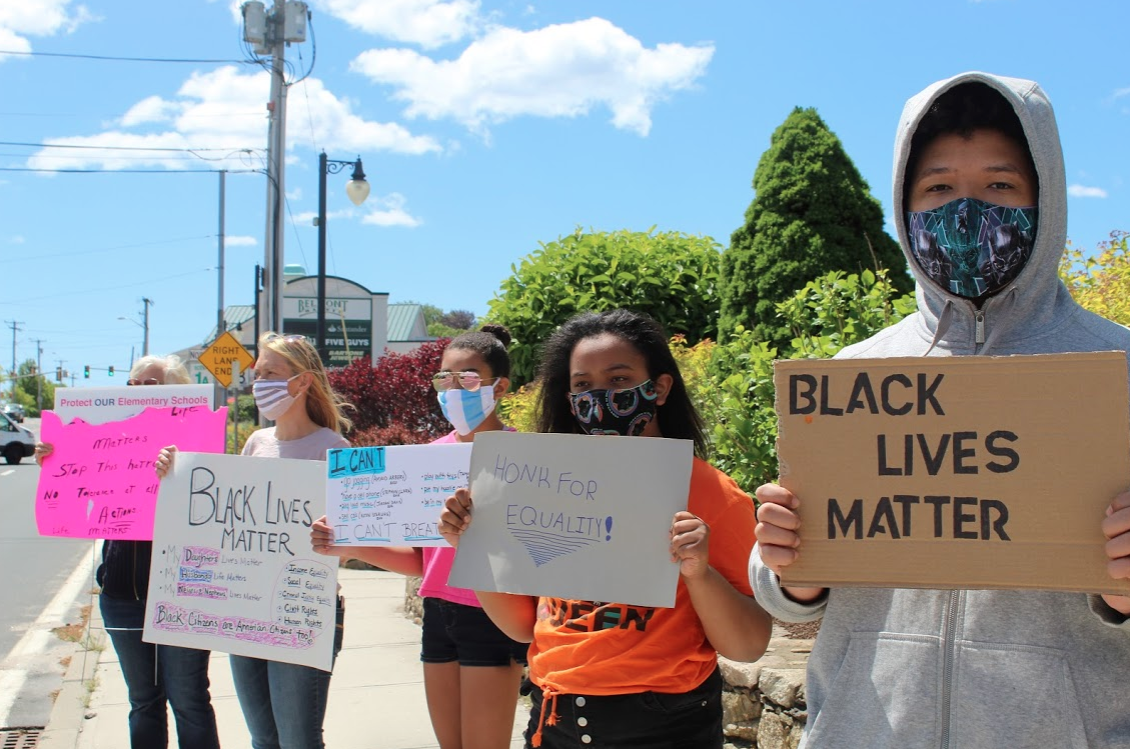 Community members from a wide array of backgrounds and ages were drawn out to Dale Carlia Corner on Monday. 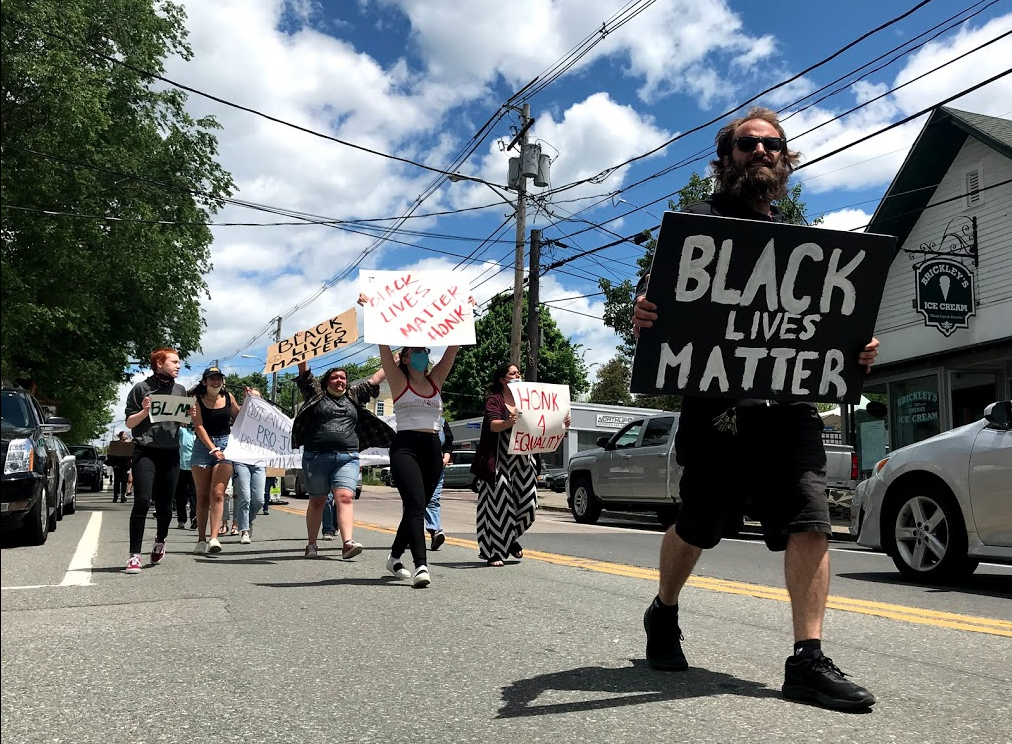 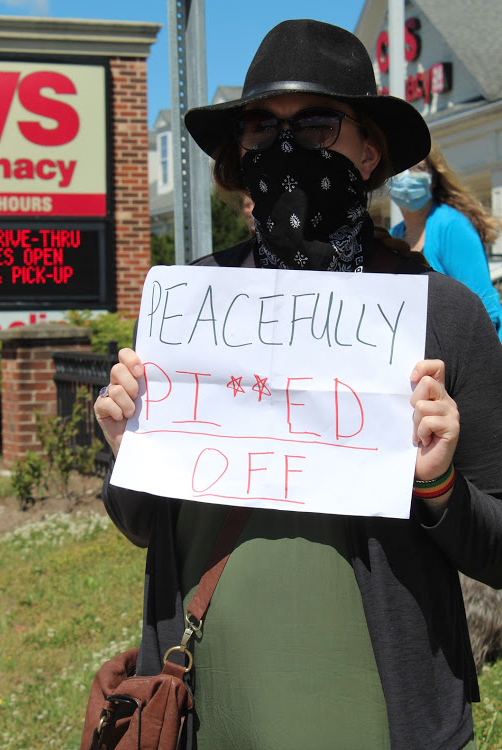 An unidentified protester stands out at Dale Carlia Corner on Monday.

South Kingstown resident Myshon Coppock (right) holds up a sign that reads “I hope I don’t get killed for being black today.”

A group of young children wave their signs at Dale Carlia Corner on Monday.

A woman holds up a sign at Dale Carlia Corner on Monday in support of the Black Lives Matter movement.

Community members from a wide array of backgrounds and ages were drawn out to Dale Carlia Corner on Monday.

An unidentified protester stands out at Dale Carlia Corner on Monday.

WAKEFIELD – If you drove through Dale Carlia Corner on Monday morning, you would’ve seen protesters gathered all along the sidewalks of the busy intersection, holding banners and signs in support of the Black Lives Matter movement.

It was an act of solidarity that brought out residents of all ages and races, collectively speaking out against the death of a black man at the hands of a Minneapolis police officer. Last week, George Floyd had been accused by a deli employee of using a counterfeit $20 bill, and less than an hour later he was dead.

Videos from bystanders and security cameras show Officer Derek Chauvin, who has since been fired from the Minneapolis Police Department, and charged with second-degree murder and second-degree manslaughter, kneeling on Floyd’s neck for eight minutes and 46 seconds. The three other officers present for the arrest have also been terminated and face other charges.

In the sea of signs and banners that covered every corner of the intersection, “I can’t breathe,” appeared on numerous poster boards – something Floyd can be heard saying on numerous occasions throughout video footage of the arrest. Others held signs that read “white silence is violence,” “Black Lives Matter,” and “complacent is complicit.”

South Kingstown resident Myshon Coppock, 21, held up a sign that read “I hope I don’t get killed for being black today.”

Coppock said he wasn’t just protesting for himself, but for a better future for his friends and family – especially his young 9-month-old nephew.

“This has become the norm, and it shouldn’t be,” Coppock said, advocating that everyone come together and show unity against police brutality and racism.

“I love everyone. Black Lives Matter doesn’t mean that no one else’s lives matter,” he added, minutes after a passerby had yelled out their car window at Coppock and others that ‘all lives matter.’ “There’s white people out here, there’s hispanic people out here – everyone’s out here.”

A very limited number of drivers yelled out their windows at protesters, though far more beeped their horns in support as they drove through the intersection.

Standing beside Coppock at the corner in front of CVS Pharmacy was Ashanti Mitchell, 20, holding a sign that read “When will black lives matter?” The South Kingstown resident said she was surprised by the size of the turnout.

“I honestly didn’t think it was going to be this big,” Mitchell said. “I’m proud of this town for coming out and showing up.”

“It’s very imperative that we’re out here protesting, because no black person should be scared to be black in America,” Mombelly said.

It wasn’t quite the turnout she’d hoped for, but other recent graduates came to show their support and stand in solidarity.

Friends Ellie Beck, Sarah Ilgenfritz and William DeJesus all stood together on another corner of the intersection, holding signs they’d made the night before and chanting “Black Lives Matter,” or “I can’t breathe” with roughly 150 other community members who’d come out to protest.

“I don’t personally know the struggle, but I see it on the media and I see it everywhere,” Beck said, “and it’s not the kind of world I want to live in.”

Ilgenfritz echoed her comments, stressing that everyone needs “to fight for what we believe in.”

“I believe that we all should be treated equally and the society we’re living in now is not what it should be,” she said.

Showing solidarity, even if you’re not black or likely to fall victim to police brutality, is hugely important, according to DeJesus.

“I’m not black, but I’m hispanic,” he said. “I’ve been through a lot, and people don’t realize how bad it can be.”

Last year, DeJusus said he was stopped by a police officer and had his backpack searched on his way to school because they’d received a call about “someone acting suspicious.”

“I just want it to be fair for everyone,” he said.

Members of local government also came out to Dale Carlia Corner on Monday morning to show their support and solidarity. Town Council President Abel Collins, along with members of his family, held up papers and cardboard with the words “Black Lives Matter” written in bold.

“This was just organized starting last night – which I think reflects well on South Kingstown and the community at large,” Collins said. “It’s been very respectful.”

“You’ve heard the response from the passers by,” he added, gesturing to the several car horns beeping in the background as he spoke. “I think everybody’s very happy to support Black Lives Matter and the fight for justice for those who’ve been killed by police brutality.”

“I think South Kingstown does what it can to support,” Collins went on. “Thankfully it’s not a huge problem here locally, but it’s good to see people coming out in support of the struggle that’s happening nationwide.”

During the first hour and a half, protesters stood out on the corners, clapping when passerbys honked in support, chanting, and occasionally moving around the intersection with signs and banners in hand.

Shortly after noon, when pedestrians were given the walk signal, a group of young protesters gathered in the center of the intersection. After 30 allotted seconds passed, however, the group stood its ground and refused to move, encouraging others to join them.

Nearby police activated their lights, but rather than break up the demonstration and send protesters back to their respective corners, officers began shutting down the intersection and redirecting traffic away from the crowd.

The group of young protesters, composed mostly of high school and college-aged students, began to march down Main Street. But still, officers continued to redirect traffic while the group made its way past restaurants and shops on Main Street, traveled down High Street past Town Hall, and rounded the corner down Kingstown Road.

Several community members came out into their front yards and stood on their doorsteps, applauding the young protesters taking up the roadway and cheering them on. One woman stopped in her car along Kingstown Road and clapped as she fought back tears.

The march through downtown came to a stop at Dale Carlia Corner, but when protesters attempted to occupy the center of the intersection again, several police officers got out of their vehicles and attempted to rein everyone back onto the sidewalks.

After several minutes of coaxing, arguing and words from community member Paula Whitford, who thanked the remaining crowd for their activism and reminded everyone to continue keeping the peace, tensions were eased.

Still, some young protesters hoped to see solidarity from the police officers themselves. After several minutes of discussion between an officer and those kneeling on the sidewalk, one officer took a knee.

On Facebook, community member Justin Case later said he was thankful “to have good, reasonable people in the police force in South Kingstown.”

“They handled the peaceful protest wonderfully,” Case wrote in a town Facebook group.

He had been pleased that the officer talked to everyone after and took a knee, though some present and later on Facebook were not convinced the gesture had been sincere or went far enough.

In an official Facebook post from the South Kingstown Police Department later that day, they thanked “everyone involved in the well organized show of solidarity for a righteous cause at the peaceful protest.”

“We stand with you in the mission to end racism and police brutality across the country,” the post read.

South Kingstown Police Capt. Joel Ewing-Chow said the department is appalled by the actions of the police officers in Minnesota, and having seen the footage, personally believes they fell grossly short of the oath they swore to serve and protect.

Ewing-Chow said the department fully supports everyone’s First Amendment rights to advocate for change and have their voices heard, and that their number one concern was ensuring the safety of community members at the busy intersection. Later, when the group of younger protesters marched down Main Street, they kept a close eye and made sure to safely divert traffic.

Although things did get a bit tense at the end of the protest, Ewing-Chow said he was pleased that everything remained peaceful, no one was harmed and no arrests were made.

“We don’t want to do that,” he said, “We want to work with our communities to make things right the best way we can.”