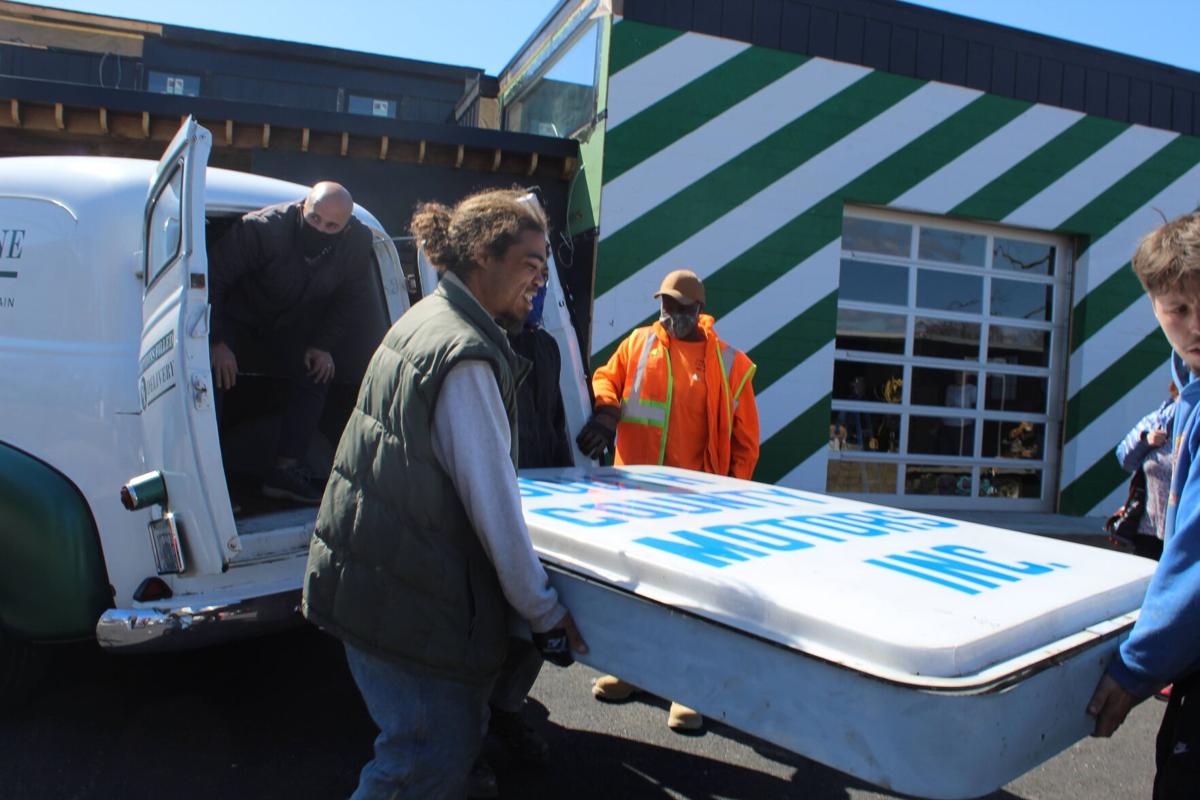 Crew members remove the former South County Motor sign from the back of a Green Line Apothecary delivery van. The Siegmund Family will be holding onto the precious keepsake. 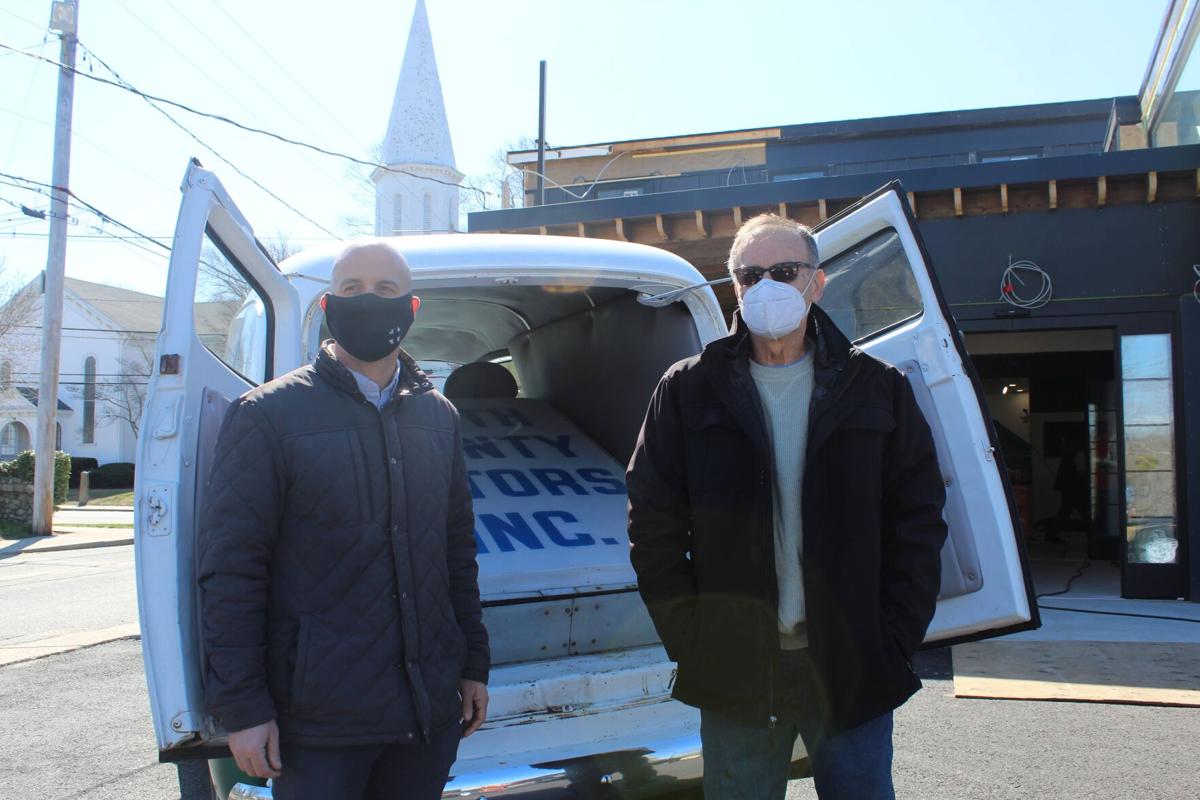 Ken Procaccianti and George Siegmund pose for a photo with the former South County Motor sign.

Crew members remove the former South County Motor sign from the back of a Green Line Apothecary delivery van. The Siegmund Family will be holding onto the precious keepsake.

Ken Procaccianti and George Siegmund pose for a photo with the former South County Motor sign.

WAKEFIELD — After 48 years of service, small business owners Gerry and George Siegmund made the bittersweet decision to close South County Motors and move onto the next chapter of their lives.

“We had a really good run,” Gerry reminisced. “It was a good business. We made a lot of friends, and had fantastic customers the whole way.”

This past summer, when the couple decided to close their doors for good, they weren’t simply saying goodbye to a brick and mortar structure. Through their hard work and dedication, South County Motors became an iconic fixture of downtown Wakefield, but at its core, the small business was the Siegmund Family’s home away from home.

Over the years, their children, grandchildren and even the family pet all spent countless hours at 245 Main Street — fully embodying the meaning of a family run business.

As sad as it’s been to say goodbye, Gerry and George are heartened to know the building will be taking on a new life.

In the place of South County Motors, Green Line Apothecary will be taking up a new residence. About five years ago, husband and wife duo Ken and Christina Procaccianti were able to bring classic American drug store charm back to Main Street, and their own small family business has been quickly expanding ever since.

In April 2019, Green Line Apothecary opened a second location on North Main Street in Providence – cementing two widely popular, full-service pharmacies, apothecaries and soda fountains. Though they weren’t expecting to outgrow their Wakefield location at 203 Main Street quite so fast, they knew they didn’t want to move far.

“We’re committed to Main Street,” Ken said. “We live here in Wakefield and we’re really drawn to this building because of its history and prominence here.”

“We’re excited to carry on the family owned business legacy of this building,” he added, which is currency undergoing some major renovations.

Last week, Ken took some time to walk through the project site with Gerry and George, along with their youngest grandson, to show them how much the space has changed in the past several months. The carpeting and floors in the old office, where Gerry fondly remembers setting up her grandson’s cot while she worked, have all been taken out to expose the original hardwood beneath.

And the showroom window, where they would put cars out on display, will now be home to the new soda fountain. For Gerry, the showroom window brings back fond memories of their family dog sitting there to bathe in the attention of school children after the final bell, but now she’s looking forward to coming back with her oldest grandson to enjoy a root beer float.

The back of the building is currently being transformed into the pharmacy area, and upstairs renovations will house the business’s central administrative positions.

Though there’s lots of renovations and updates happening on site, Ken said they wanted to make sure they didn’t forget the building’s routes.

“We wanted to pay a little homage to the many decades you spent here,” he told Gerry and George last Friday, “and we have an affinity for older things.”

In recent years, Green Line Apothecary has made a name for themselves all over Rhode Island, thanks to their statewide deliveries and memorable vehicles — which include multiple 1949 Chevy panel vans.

In their new location, while customers browse their selection of products, the space will also feature a 1949 Chevy truck — which they’ve modified to light up, make sound effects, and also fit inside the shop.

“We thought it would be a nice way to tie the history you spent here working on automobiles,” Ken explained to Gerry and George.

Being able to show them how much the shop has already changed and the homage they’re paying to its unique history was a gift, according to Ken, but the main reason for having Gerry and George visit last week was to give a piece of that history back.

For months, Christina and Ken have held onto the original South County Motor sign — and not without plenty of complaints from crew who has had to lug it from space to space throughout the renovation process. While it’s certainly large and heavy, the couple knew it would be a priceless keepsake for the Siegmund Family.

After 48 years of fixing everyone else’s cars, George said he’s looking forward to finally having time to tackle his own projects. He’s hoping to hang the old South County Motors in his barn, where he’s got some exciting car restorations planned.

And while Gerry has enjoyed not having to deal with all the bookkeeping and headaches that come with running your own small business, in some ways, she has missed the hectic day-to-day shuffle, and their many wonderful customers that walked through the door. When life resumes some semblance of normalcy, she’s looking forward to getting back out into the community and volunteering her time.

Like Gerry and George, Christina and Ken also have daughters — three of them to be exact — and while they’re still young, they’ve got plenty of opinions. They’ve already spent lots of time around the construction project, according to Ken, and they’re excited to give the input and ideas since they’ll be spending so much time there, too.

The South County Motors building has certainly undergone a bit of a facelift, but both families are happy that the true character of the shop won’t be changing all that much.

Green Line Apothecary plans to open in its new location later this spring, according to Ken, and hopefully enjoy a history as long and as deep as its former owners.

“God willing, we’ll be here half that long,” he said.