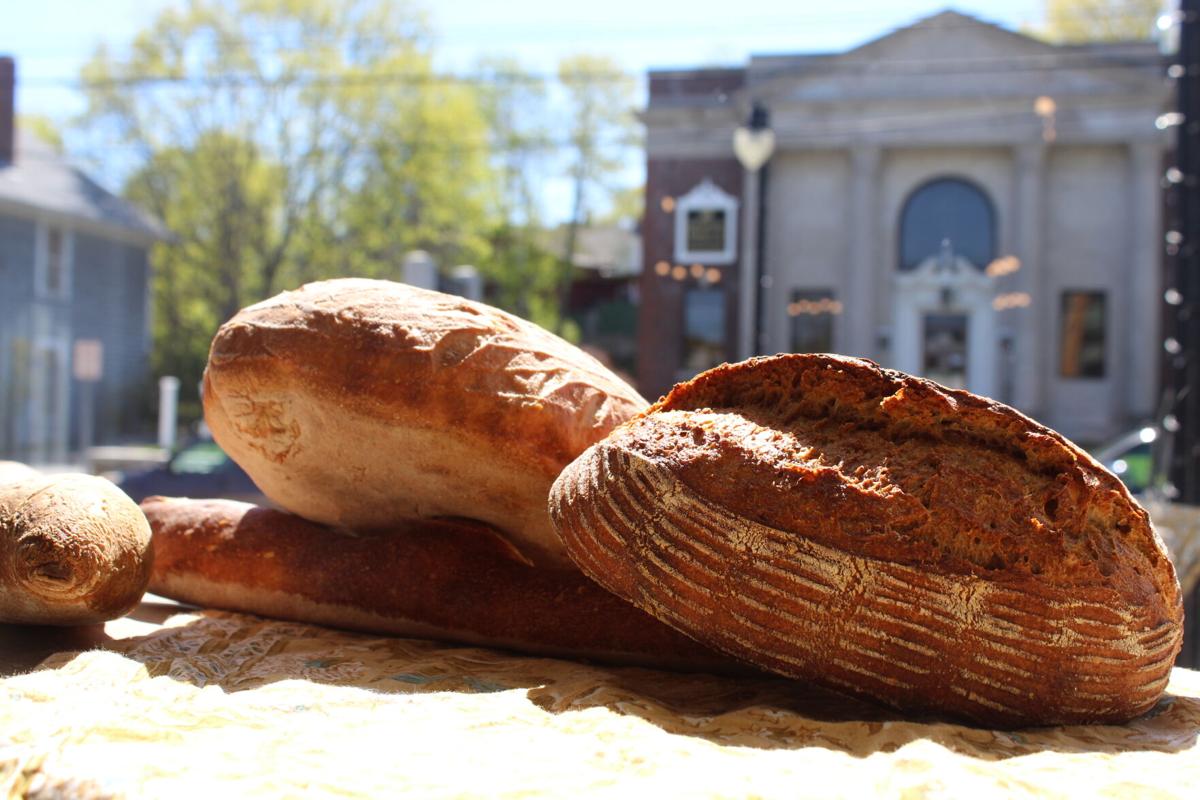 South County Bread Co opened its doors Saturday to crowds of people lined up to try one of their many different types of bread offered. The shop is located at 333 Main St., Wakefield and is open Thursday through Monday, with fresh bread available starting at 9 a.m. Fresh loaves are out on display in the front window. 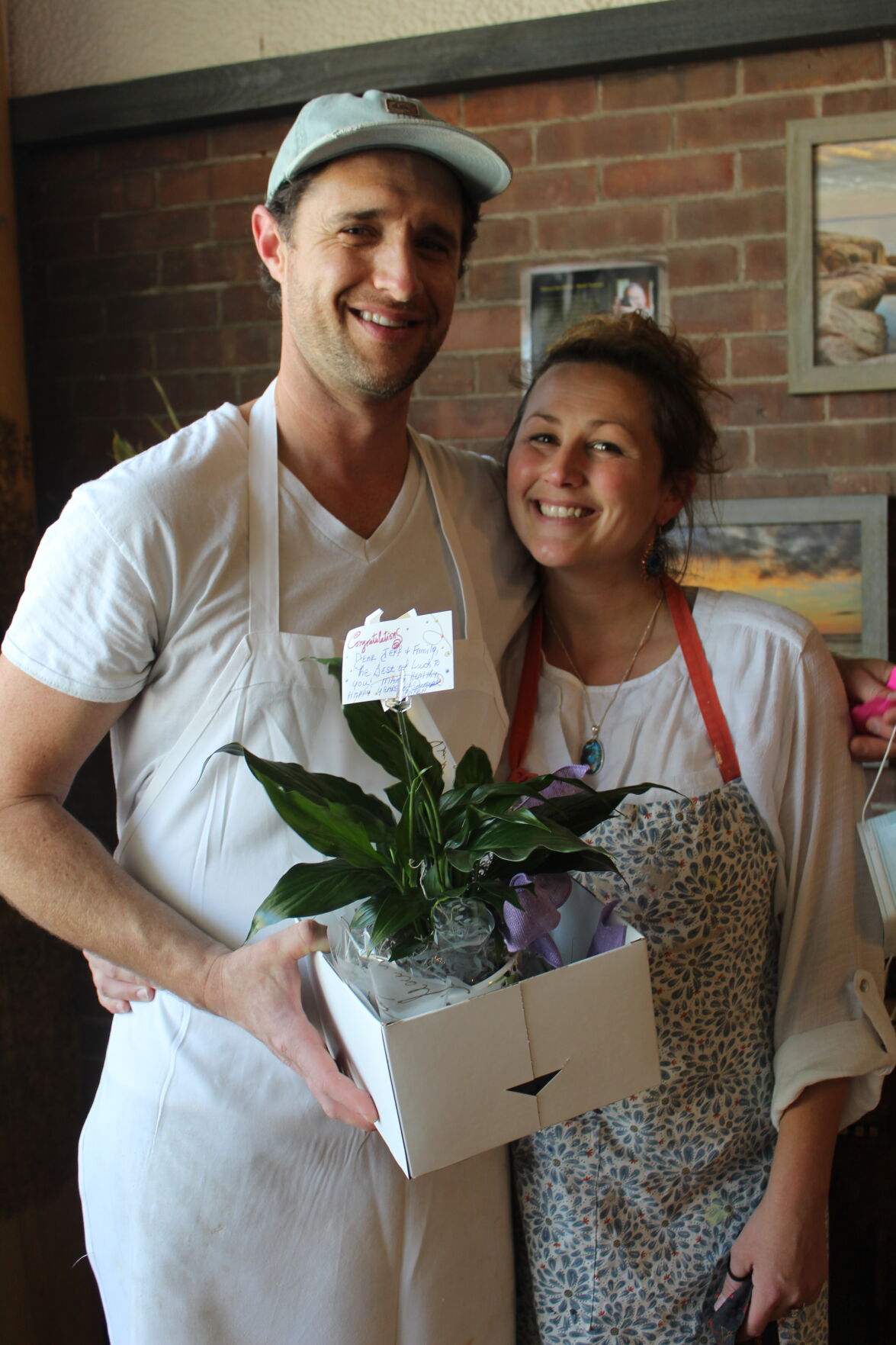 Owners Jeff and Keri Lyn Collins take a quick break in the midst of a hectic opening day. Four hours after opening their doors, nearly everything was sold out. 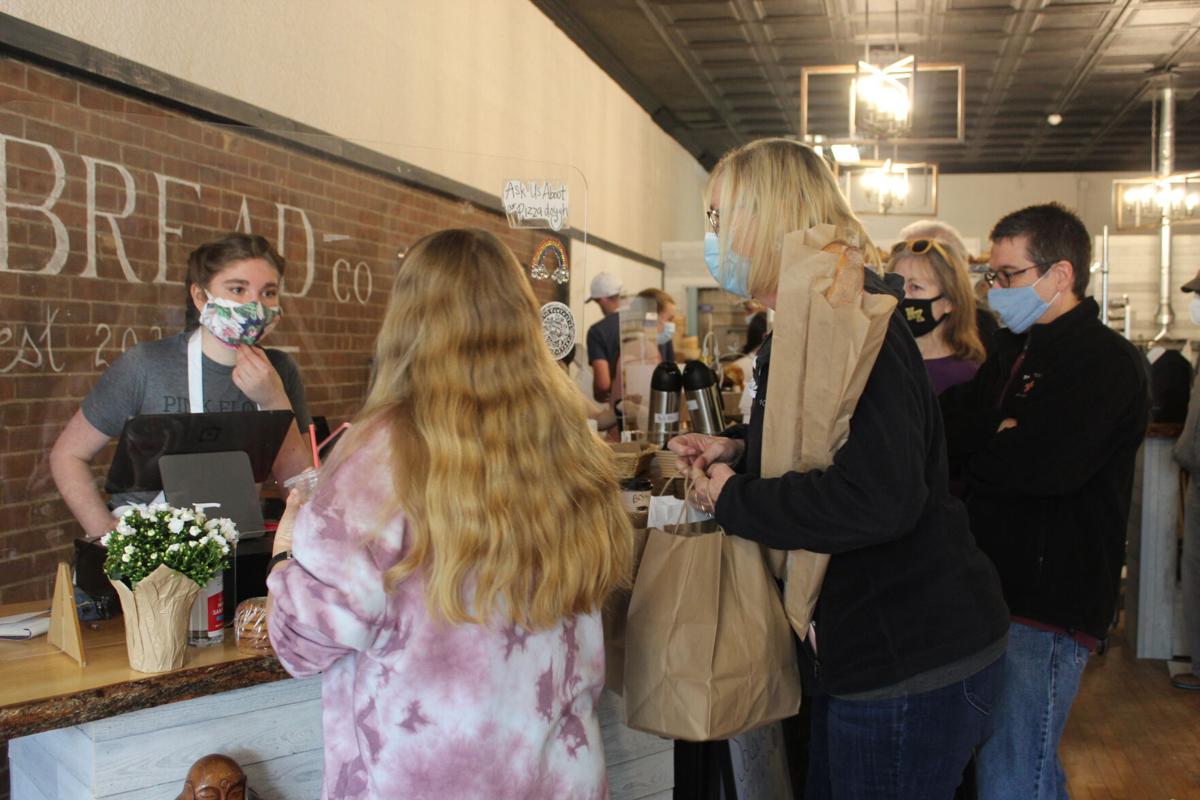 Community members flock to South County Bread for fresh loaves and pastries on opening day. A long line forms all the way out the door for most of the day.

South County Bread Co opened its doors Saturday to crowds of people lined up to try one of their many different types of bread offered. The shop is located at 333 Main St., Wakefield and is open Thursday through Monday, with fresh bread available starting at 9 a.m. Fresh loaves are out on display in the front window.

Owners Jeff and Keri Lyn Collins take a quick break in the midst of a hectic opening day. Four hours after opening their doors, nearly everything was sold out.

Community members flock to South County Bread for fresh loaves and pastries on opening day. A long line forms all the way out the door for most of the day.

WAKEFIELD – The smell of warm bread wafted through the air and a line formed out the door on Saturday morning as South County Bread Company made its opening debut on Main Street.

Bringing fresh, whole grain, artisan breads to their fellow community members has been a labor of love for husband and wife duo Jeff and Keri Lyn Collins, and downtown Wakefield has eagerly welcomed them with open arms.

“It’s been awesome,” Keri Lyn reminisced on Saturday while looking out at shelves that had mostly been laid bare, just a few hours after opening their doors. “It’s totally crazy, but it’s good.”

Opening day brought a seemingly never-ending procession of new and familiar faces, and together, Jeff and Keri Lyn will have likely turned them all into regulars. While Jeff and the crew are at work in the “back of house” creating long fermented breads, Keri Lyn’s warm “front of house” personality makes next door neighbors and first-time customers feel equally welcome.

This storefront has been a dream come true for the pair, and they’ve come a long way over the past several years. From Jeff’s time baking at Belmont, to striking out on his own in the kitchen of Kingston Pizza, the journey to get where they are today wouldn’t have been possible without lots of hard work, and the kind helping hands of friends and family.

“I have a lot of wonderful friends and family who went above and beyond,” Jeff said, looking out at the newly renovated space. “We worked really hard to get this place to look this nice.”

The list of people Jeff and Keri Lyn had to thank was a long one, but just a few of the people who went above and beyond include their friend Kevin Mckiernan, who handcrafted the sign that’s now hanging above the front door, and Steve Gregson, who “spent tireless hours” as the couple’s unofficial contractor to get everything ready in time.

The efforts of their friends and family can be seen in every corner of their new, beautifully renovated space, but there’s also plenty of other local touches the couple has embraced.

While customers stand in line, waiting for fresh bread or pastries, other local products can be found on the shelves – like Seaworthy Coffee from West Kingston, local jams and maple syrup, and photographs by their next door neighbor.

“If our goods aren’t local, they’re really sustainably sourced,” according to Keri Lyn, like the shop’s beautiful selection of bread warmers.

Main Street’s newest fixture will be opening its door much earlier than most of its neighbors.

South County Bread Company will be serving up coffee and offering and prepackaged goods like cookies and banana bread on their shelves from 6 a.m. to 8 a.m. – before other local coffee shops are open for business.

“Our biggest thing is we don’t want to compete with people, we want to work with them,” Keri Lyn said.

During those first early morning hours, most of the staff isn’t busy pouring coffee though. The back of house team is already hard at work preparing all of the day’s fresh breads and pastries to head into the oven. Although they’ve only just opened their doors, Jeff said they’ve been fortunate enough to build a strong team and real sense of comradery with the staff.

At 8 a.m., fresh pastries are beginning to come out, but the “main event” doesn’t take place until later in the morning, after 9 a.m., when the warm, fresh bread begins coming out of the oven. For those who aren’t able to get down to Main Street on their lunch breaks, there’ll be plenty of time for working families to swing by later in the afternoon to get fresh bread for dinner.

The husband and wife duo will be keeping their doors open until 6 p.m., with the busy dinner crowd in mind.

Thankfully, Jeff and Keri Lyn have a great staff – who stepped up to the plate and came to the bakery ready to work hard. The training period was brief for many of them, some beginning only a day before opening, but they handled the wave of eager customers like pros.

“We just lucked out,” Keri Lyn said. “We’ve got some really good people.”

The days leading up to their grand opening at 333 Main St. were a bit hectic and stressful, but everything pieced together in the end. The friends and family who helped make this dream possible were all there to celebrate the amazing achievement – and even poke some fun.

“My friend today said, ‘Congratulations! You’re officially going to work every day for the rest of your life, starting now,” Jeff said with a laugh.

Thankfully, this has been a dream come true and a labor of love, all rolled into one.

“I can’t see myself doing anything else,” Jeff said.