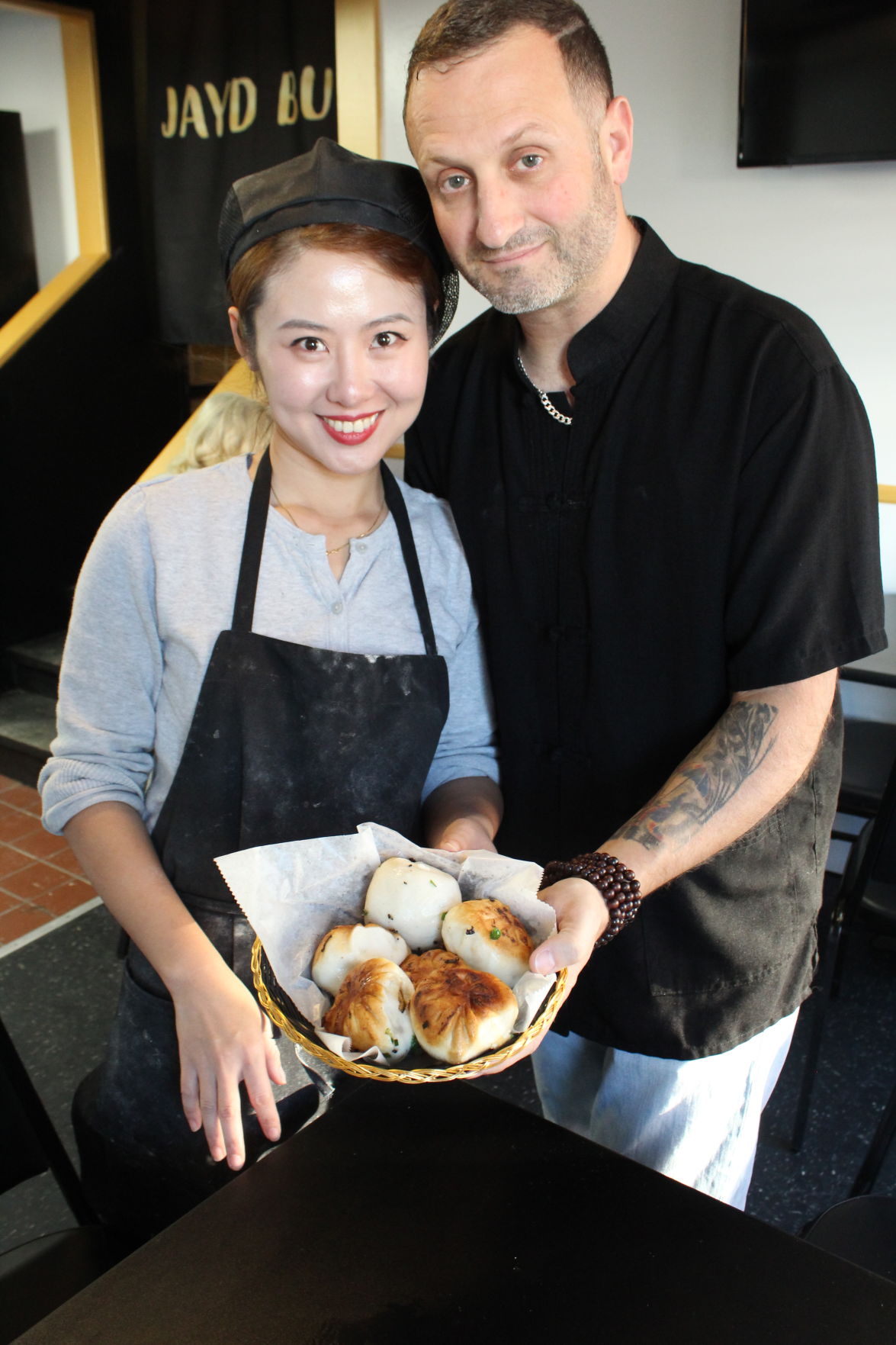 Joe and Annie Parisi pose for a photo in their new, authentic Chinese restaurant in downtown Peace Dale, “Jayd Bun.” Their pork buns and homemade soups have become staple items on the menu. Everything is made fresh and by hand each morning. 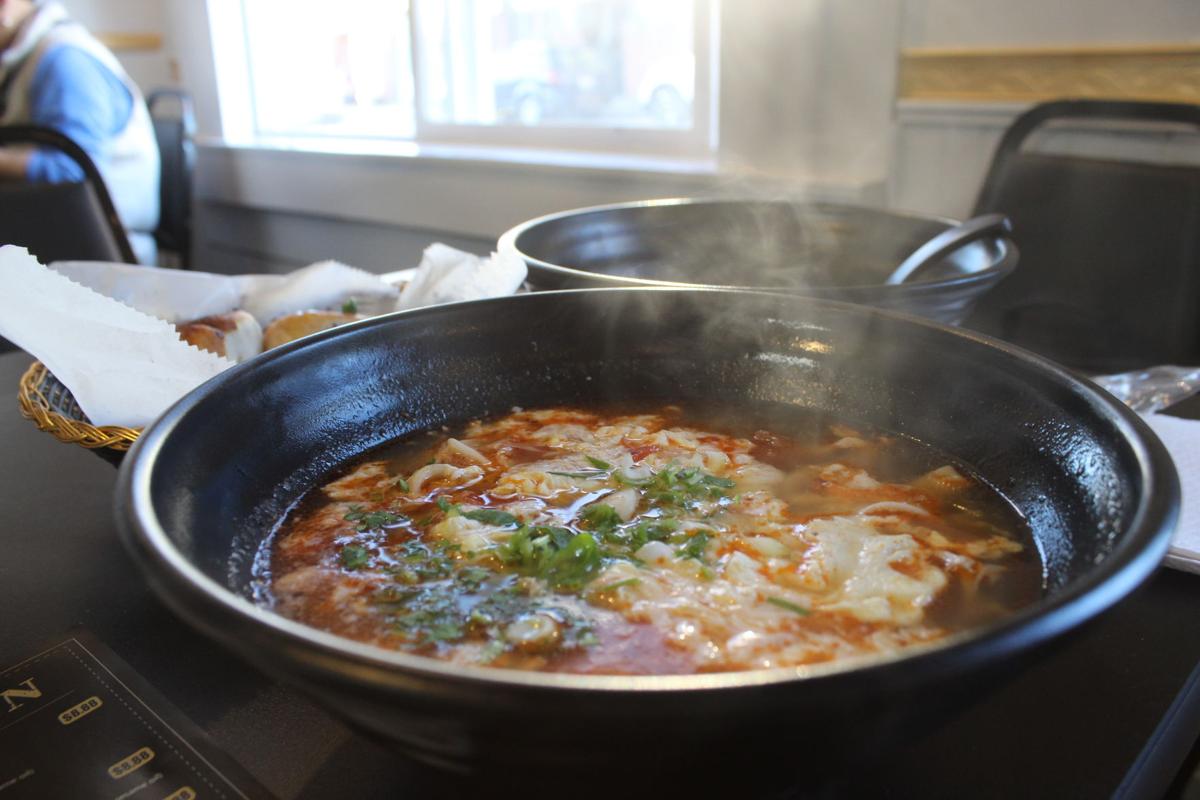 Annie's homemade tomato soup is served fresh every day and filled with her hand rolled noodles. 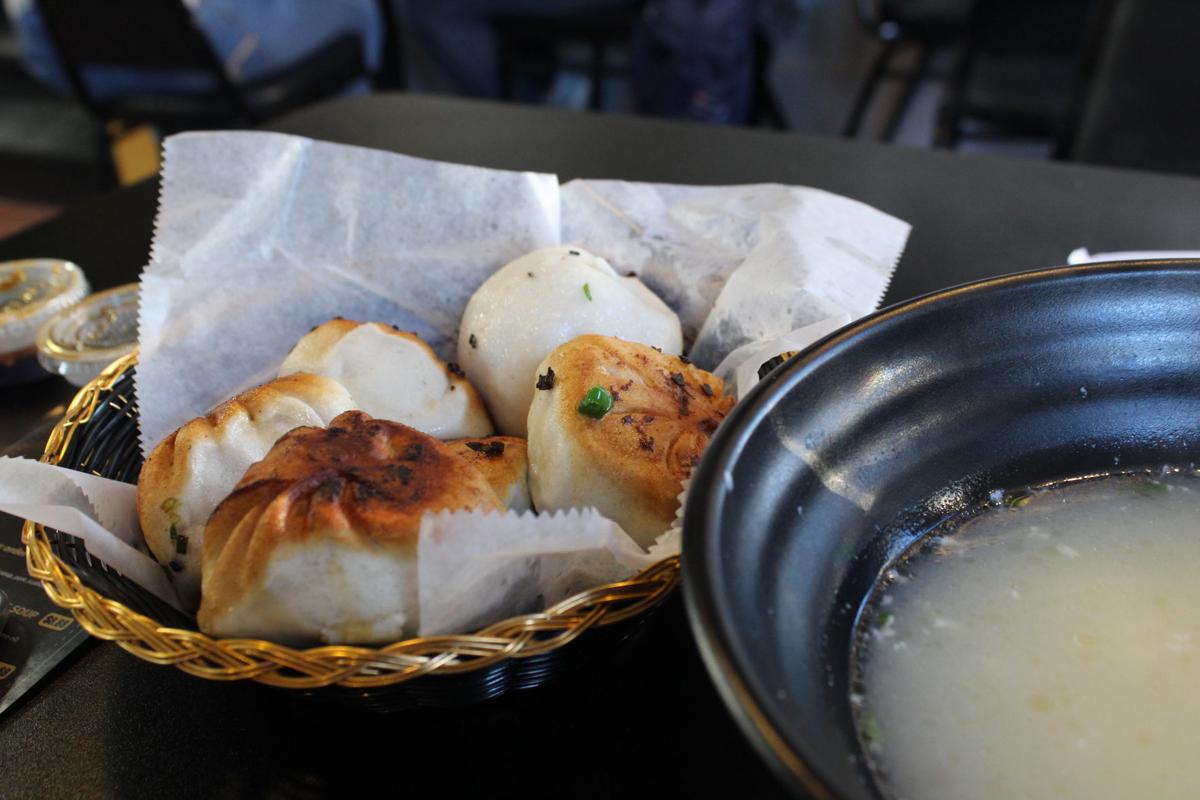 Annie's freshly made pork buns are a huge hit with customers.

Joe and Annie Parisi pose for a photo in their new, authentic Chinese restaurant in downtown Peace Dale, “Jayd Bun.” Their pork buns and homemade soups have become staple items on the menu. Everything is made fresh and by hand each morning.

Annie's homemade tomato soup is served fresh every day and filled with her hand rolled noodles.

Annie's freshly made pork buns are a huge hit with customers.

PEACE DALE – “There’s nothing around, anywhere around here, like she makes,” Joe Parisi said with pride in his wife Annie. “Most Chinese restaurants are American-Chinese. If they do serve traditional Chinese, they still don’t do what she does.”

For the past few weeks, Jayd Bun, a new and authentic Chinese restaurant located in the heart of downtown Peace Dale, has been serving up a small but delicious menu. The items, like their signature pork buns or homemade soups, are all made fresh, by hand, each morning.

Though Annie had been slightly apprehensive about opening up shop, worried her food would be too radically different from what most Americans consider to be Chinese food, she’s been thrilled by all the positive feedback she’s received so far.

“I understand that people may be scared to try new things,” Annie said. “I was a little worried that people might not want to try it, or they might not like it. It’s very, very different.”

When Annie and Joe met five years ago in Las Vegas and had gone out for Chinese food for the first time, she had no idea what she was eating. Things like General Tso’s chicken, pu pu platters, and even fortune cookies, were foreign to her.

When she started cooking authentic dishes for Joe at home, especially her tomato soup, he was blown away by the taste and the quality. He became convinced that she should open up her own restaurant.

It may not be the first thing people think of when they imagine going out for Chinese food, but Joe swears by her recipe as being the best tomato soup he’s ever had. She uses whole tomatoes and hand-rolled noodles, all made fresh earlier that morning.

When they learned that a space in downtown Peace Dale was available, they jumped at the opportunity. Although the couple currently lives in Connecticut, Joe and Annie both love southern Rhode Island. In fact, Joe grew up in Narragansett. Later in life, he came back to marry Annie at Gazebo Park, right by the Narragansett Seawall.

Now, each morning, Annie comes in early to begin the work of preparing everything from scratch and stays late into the evening. She may work long hours, but Annie still wakes up every morning with excitement, ready to get into the kitchen. Each day, she’s proud to see so many new faces coming in the door, ready to give them a chance and try new things.

Because of how much time it takes to prepare everything each day, Joe warns that wait times can vary.

“We want people to understand that everything is made fresh,” Joe said. “Everything is handmade. It depends on the time. Sometimes she might be pulling things out and it’s ready to go. Sometimes you run out and you’ve got to start fresh.”

Though some people may not want to wait that long for fresh pork buns or homemade soups when they’re in a rush, so far all of the feedback Joe and Annie have received has been positive. People have been blown away by the buns especially, for their crispy bottoms, soft, doughy tops and delicious fillings.

News about the restaurant has mostly spread through word of mouth or good reviews on Facebook since they first opened their doors on Oct. 17. Others have stumbled into the shop out of curiosity.

“She could make the noodles in abundance and put them in the fridge for days and keep serving them,” Joe said. “But she insists on making everything fresh. Even though I’ve had them a day or two old and I can’t tell the difference, she can tell the difference.”

As much as she loves cooking, getting to interact with customers is one of Annie’s favorite parts of owning her own restaurant.

Annie hopes to not only give people an authentic taste of China but to inspire them to experience her home country for themselves. Inside the small space on Kingstown Road in the center of downtown Peace Dale, ornate Chinese paper cuttings are prominently displayed on the wall, along with traditional blue and white clay vases and other works of art.

In addition to the artwork Annie brought home with her from her most recent visit, Joe also had the idea to play slideshows for their customers. While they wait for their food, guests can see images of the Great Wall, the Terracotta Warriors and even Annie’s hometown of Tianjin.

“We wanted to create a unique experience you wouldn’t see in a typical Chinese restaurant,” he said.

The unique spelling of Jayd also holds several significant meanings, according to Joe. Not only is it a nod to the ornamental mineral, known for its green varieties, but the first three letters also represent the name of a partner in the business. “J” for Joe, “A” for Annie and “Y” for their friend and mostly silent partner, Ying. Jay was also the name of one of Joe’s best friends who passed away several years ago.

The space holds significant meaning for both Annie and Joe and has become a source of pride and happiness for them.