You are the owner of this article.
Edit Article Add New Article
Home
News
Sports
Letters to the Editor
Timeout
Multimedia
Features
Classifieds
Obituaries
1 of 5 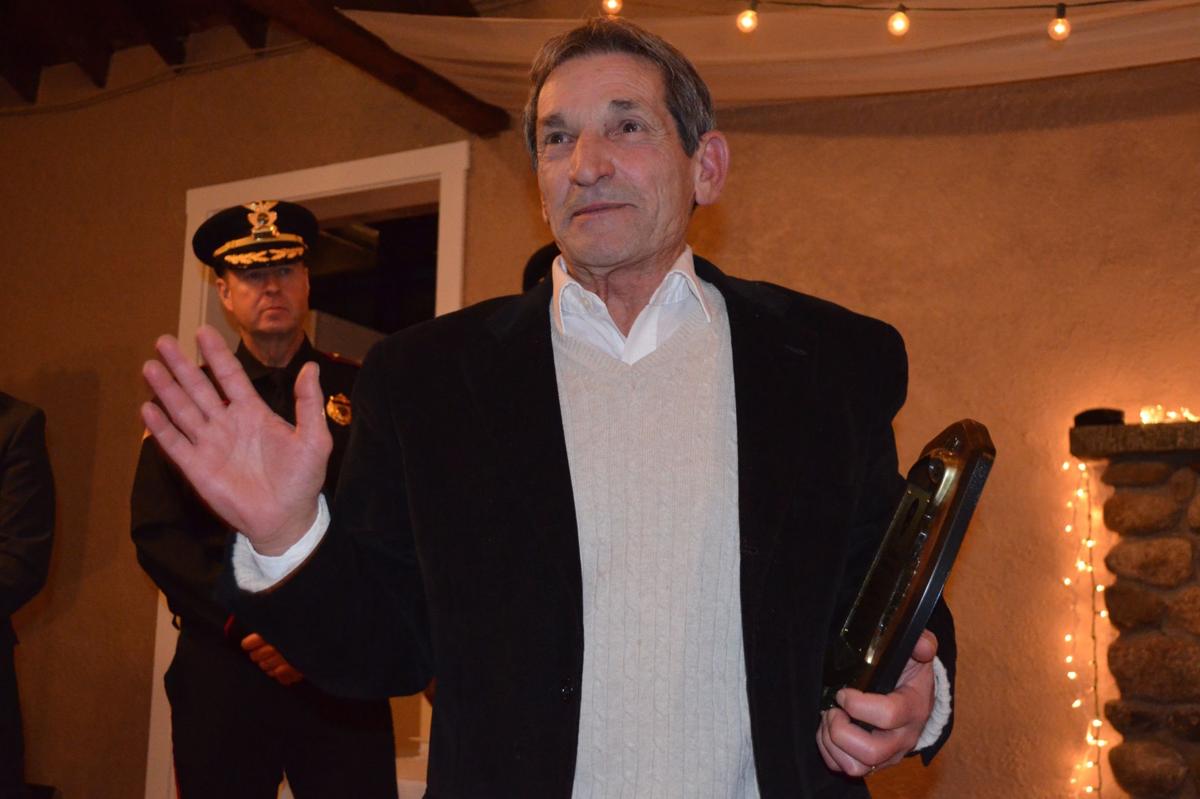 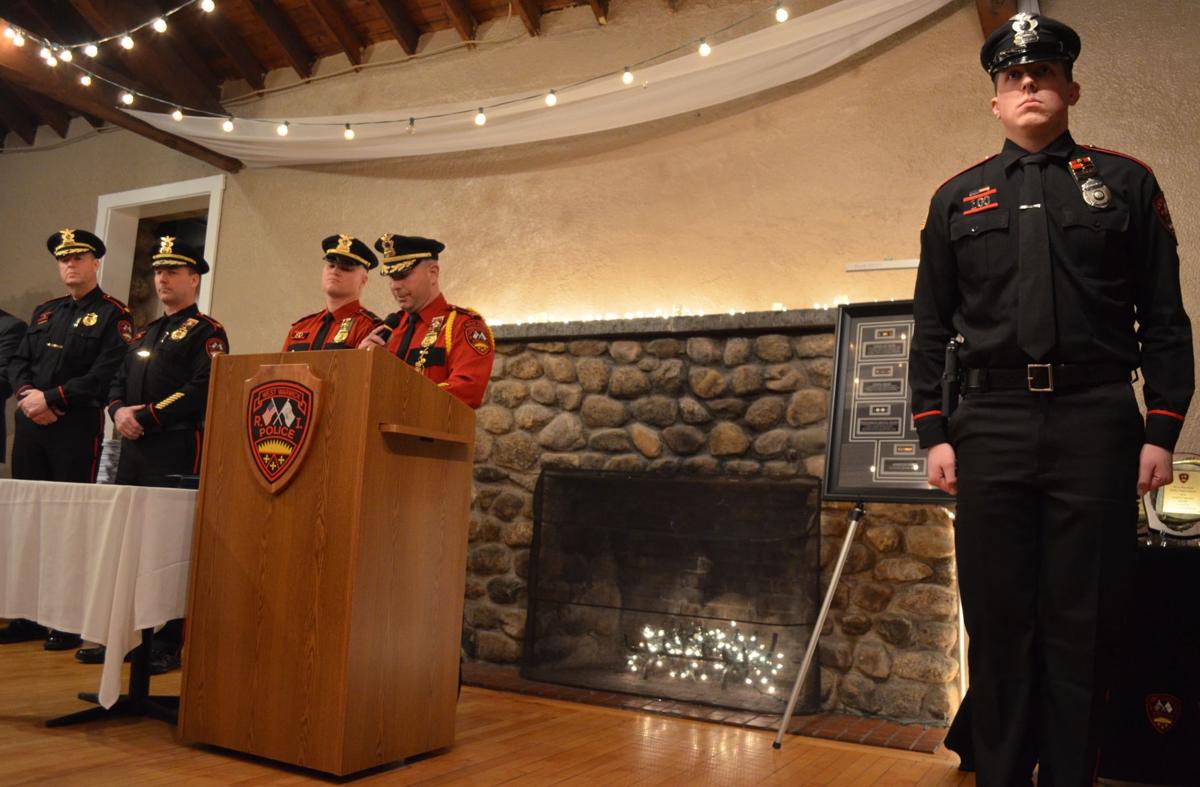 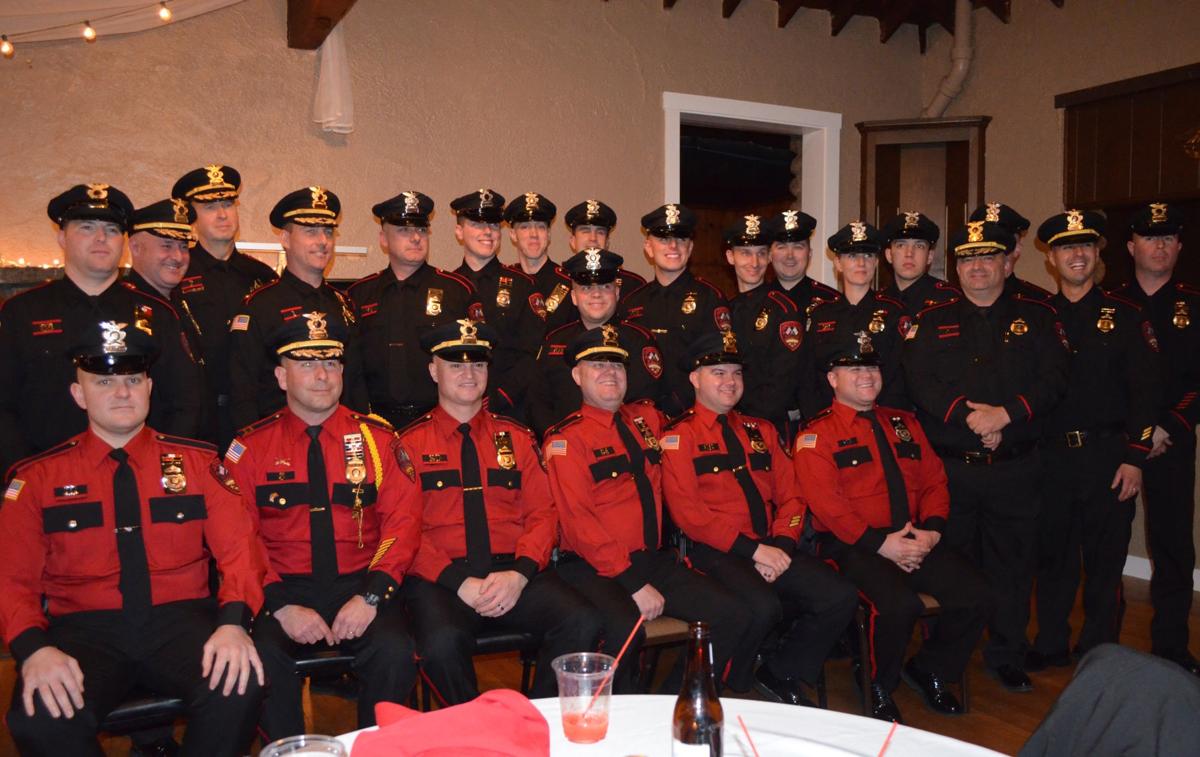 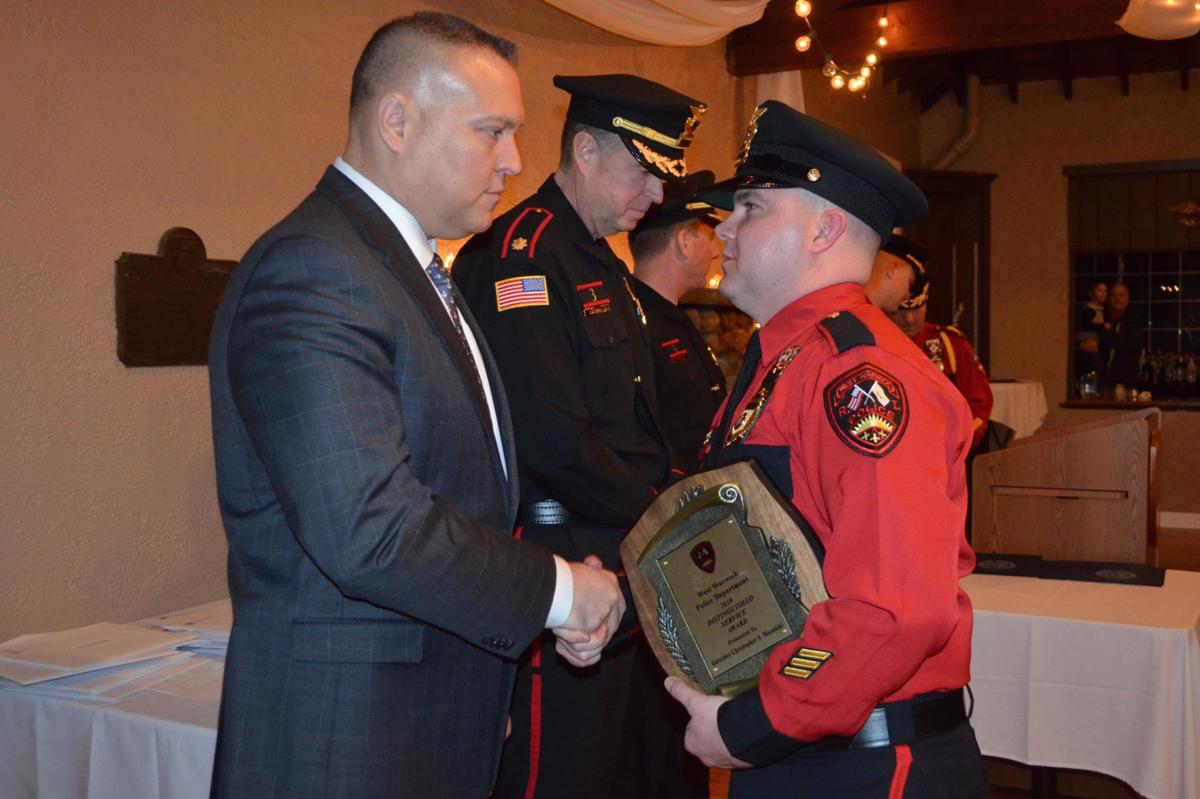 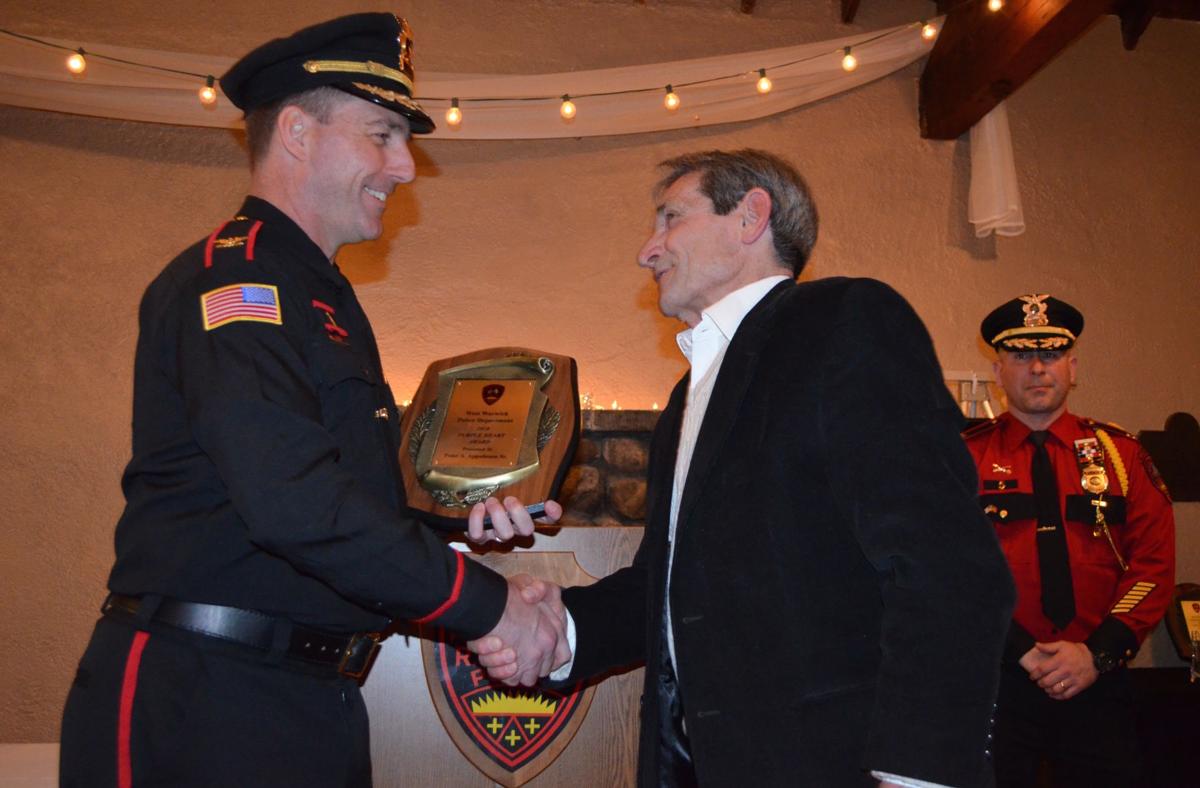 WEST WARWICK — In October of 1974, a young West Warwick patrol officer was issuing a traffic ticket on Providence Street when he was struck by a vehicle traveling twice the posted speed limit.

“You see things and do things that you’ll remember for the rest of your life, because it won’t go away,” Peter Appollonio said Saturday, standing before a crowd of current officers at the West Warwick Country Club as he recounted a career that in an instant was almost taken from him. “But that’s your job.”

Appollonio was just 25 years old when he was hit and nearly killed. And more than four decades later, recognizing the unwavering determination that led to his successful 24-year career, the West Warwick Police Department awarded the retired detective sergeant with its first ever Purple Heart.

Appollonio received the medal during the department’s annual awards banquet Saturday night. In front of their family, friends and peers, members of the department were awarded various commendations and citations for their roles in keeping the residents of West Warwick safe.

Reps. Jim Jackson and Tom Noret helped hand out awards during the banquet, held in part to show officers that their efforts are appreciated.

“We’re here to support all these officers,” said Capt. Anthony Bettencourt, chair of the department’s awards committee. “The work that they do does not go unnoticed.”

Patrolman Robert Hayden was named the 2019 Police Officer of the Year, a recognition given annually to the officer who “best represents exceptional performance during the year.”

Hired by the department in 2016, Hayden currently works as a field training officer, crash reconstructionist, SWAT team member and is the senior officer on the 4 p.m. to midnight shift.

“Bob comes to work every day and gives it everything he has,” Hemond added. “He doesn’t do it to be recognized or rewarded, but rather because he loves to help others, and he loves police work.”

For “projecting a positive image of the police department through [his] efforts in the community,” Det. Chirstopher Maznicki was given the 2019 Distinguished Service Award.

Maznicki began working for the department in 2007, and has remained steadfastly committed to community engagement.

Maznicki has taken part in Good night Lights, for example, joining officers from around the state to display police lights for the children at Hasbro Children’s Hospital. He volunteers his free time to coach local youth sports teams, as well, and is involved with the Hope Initiative, a statewide collaboration between law enforcement and substance-use professionals to guide those who need it to recovery.

Bettencourt called dispatchers “the heart and soul” of the department.

“They don’t get enough credit for the job that they do in that little cubicle,” he said. “We’re fortunate enough to have very experienced dispatchers in our department.”

The Purple Heart was presented by retired West Warwick police captain Greg Johnson, who in his heartfelt tribute to Appollonio recounted the event that earned the former officer the distinguished award.

On the day of the accident, Appollonio had been walking toward his police cruiser when he was struck by a car traveling 61 miles per hour. He was propelled over the vehicle he’d just pulled over, landing against a parked car.

“He told me his head dented the trunk of the car as his body slid beneath the vehicle,” Johnson said. “The force was so great that Peter learned later on that his revolver was broken.”

First responders lifted and pushed the vehicle off of Appollonio, whose right leg and pelvis had shattered, before rushing him to Kent Hospital.

“There were doubts that he would survive that night, let alone ever work again or, for that matter, continue his career as a police officer,” Johnson said while Appollonio sat nearby with his wife, Georgianna, listening as his story was told. “He survived the night, and was determined to not only walk again, but to fulfill his dream of being a police officer.”

Appollonio did recover, and went on to serve more than two decades with the West Warwick Police Department before retiring in 1998.

Johnson met Appollonio when he entered the profession in 1984. Johnson spoke highly of the Purple Heart recipient as he remarked on his former colleague’s legacy within the department.

“Cocaine and crack were big in the ’80s, and street dealing and related violent crime was on the rise,” Johnson recalled. “Arctic wasn’t the safest place to be at the time — there were drive-by shootings, stabbings and it was hostile for police.”

Appollonio spearheaded several operations to clean up the village, Johnson said, noting that Appollonio was “instrumental in turning the tide and restoring order.”

“He was respected by all, and feared by those running afoul of the law,” he added. “He said what he meant and meant what he said.”

In fact, Johnson said, most criminals actually liked Appollonio, who “could get anyone to confess to their crimes.”

“Whatever he did — rehabilitation from near death, police work, turning a garage into a police gym, or tiling the floor at the FOP — Peter gave 100 percent, and he didn’t quit until the job was done,” Johnson continued as he introduced Appollonio and the room erupted in applause.

“This really touches my heart,” Appollonio said just after being handed his plaque by Mark Knott, the department’s chief.

Standing before a room filled with current officers, Appollonio said he admires his successors for choosing the career that he, himself, fought so passionately to pursue all those years ago.

“It’s not something that everybody can do,” he said. “I’m proud of all of you for choosing this profession, because it’s not easy.”

Appollonio offered a bit of advice to the officers, encouraging them to “do what they were trained to do” without worrying about the judgements of others.

And as he spoke to the officers, each one dressed in uniform as they sat around candle-lit tables, Appollonio assured them that they will always have each other.

“I know when the new guys see the old-timers coming, they try to walk away and go, ‘here they come again. Watch out, they’re going to tell us how they did it in their day,’” Appollonio said.

“But you know what,” he continued, as the laughter settled. “That’s what keeps us a family. We’re a family — young, old, retired — and you’re never going to forget this job.”

CONGRATULATIONS Detective Sergeant 'Pete' Appollonio upon receiving the West Warwick Police Departments' first-ever Purple Heart Award and kudos to those Officers and Dispatchers being presented Citations  and Awards for such dedication to law enforcement and outstanding bravery to the community - be well and stay safe! - P.S. Great article!