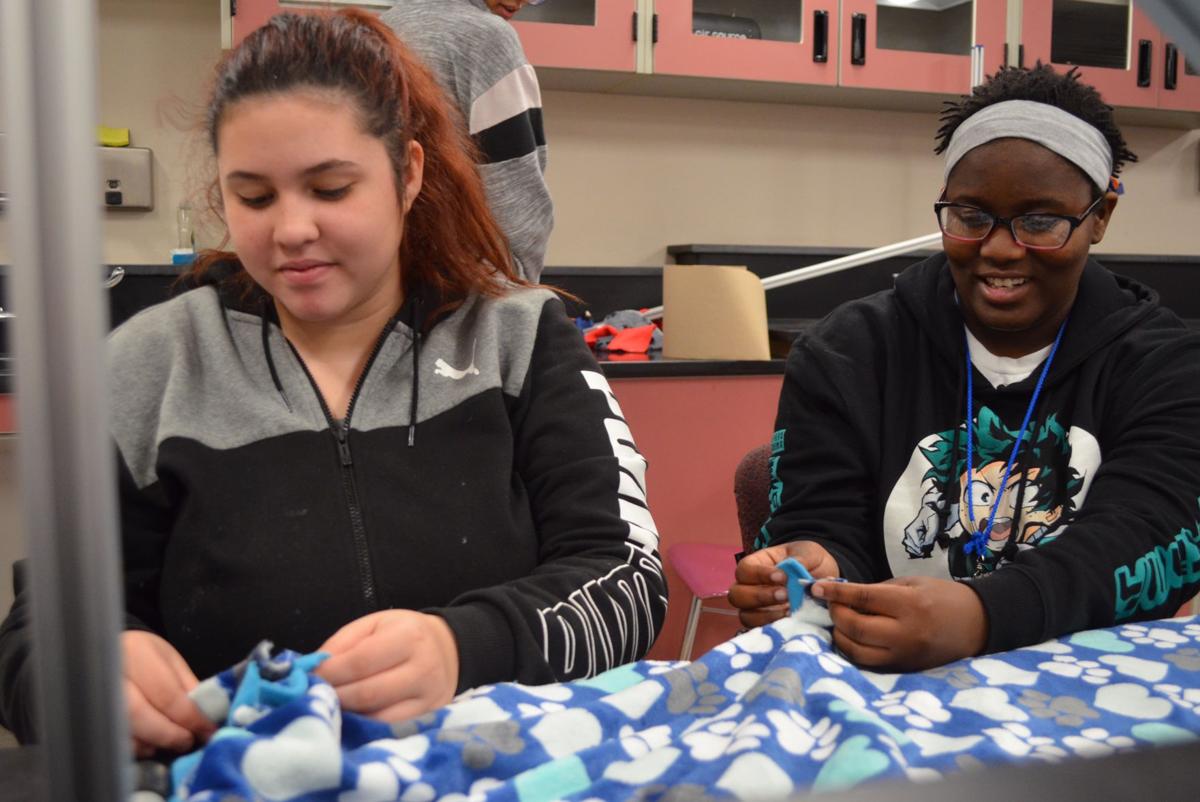 Nayelis Crespo, a senior, and Destinee Wright, a sophomore, make a blanket to be donated to the West Warwick Animal Shelter. 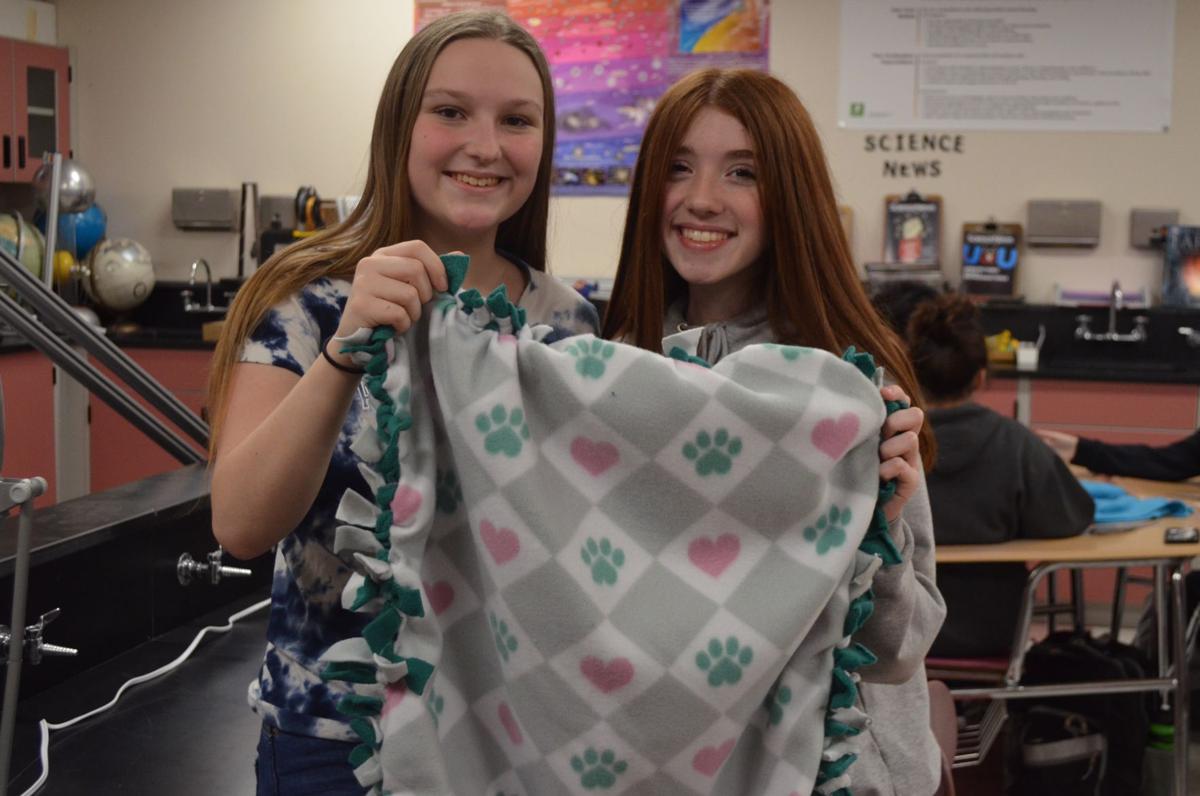 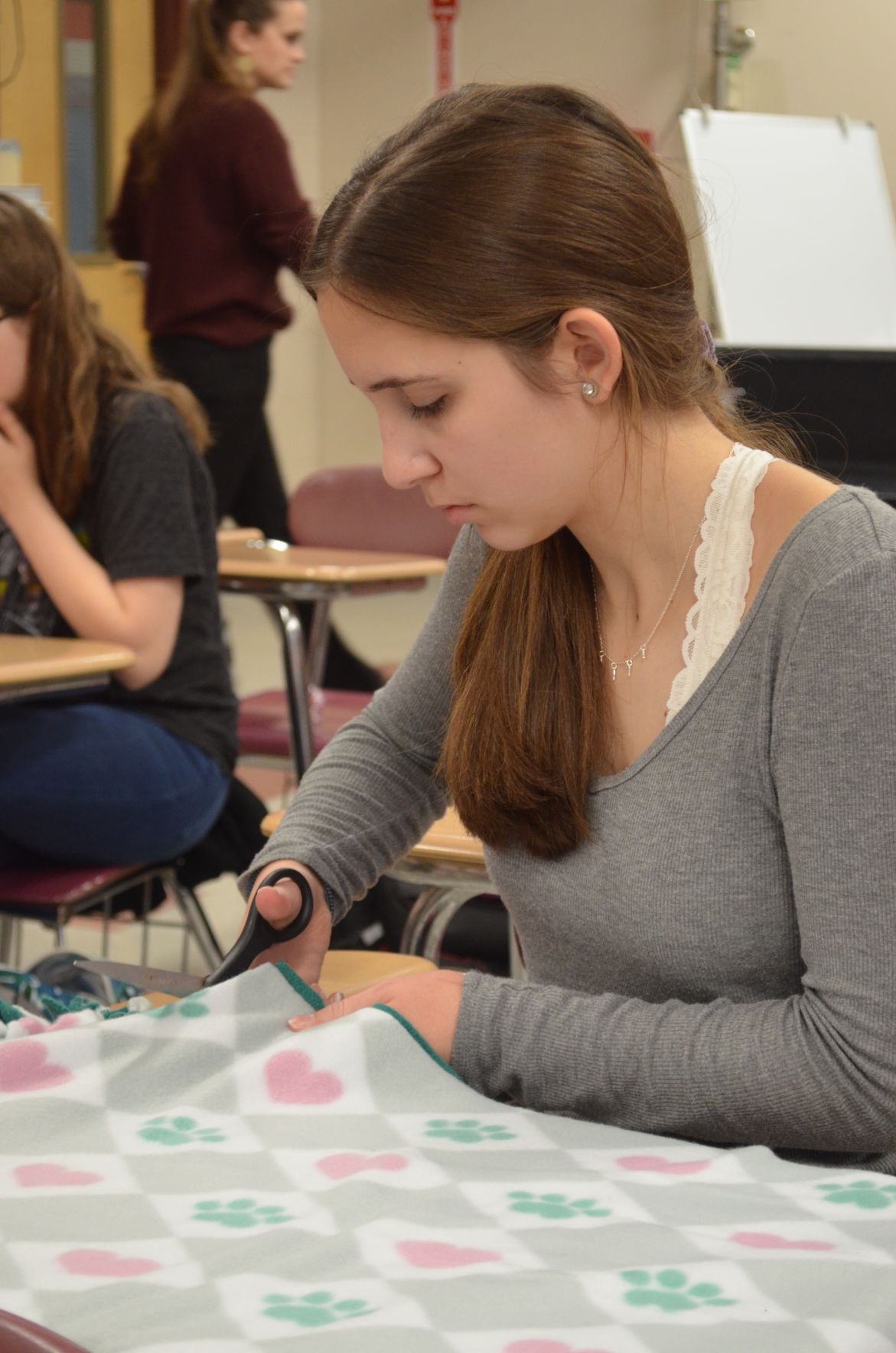 Emily Levesque, a junior, works on a blanket.

Nayelis Crespo, a senior, and Destinee Wright, a sophomore, make a blanket to be donated to the West Warwick Animal Shelter.

Emily Levesque, a junior, works on a blanket.

WEST WARWICK — At West Warwick High School, a group of students has been hard at work making blankets and collecting goods to be donated to the local animal shelter so that the animals there feel loved this holiday season.

Working alongside a classmate on a blue blanket covered in paw prints and hearts, senior Nayelis Crespo said the hope is to show the animals that there are people outside the shelter supporting them, eager to help them secure forever homes.

“Animals at shelters don’t have a designated home,” Crespo said, as she tied together two pieces of fleece. “They don’t have someone to care for them everyday, to pet them and show them affection, and that’s important.”

The students, 25 of them in all, call themselves the “West Warwick High School Paw Patrol.” Brought together by a shared love for animals, the students are part of an advisory class led by Lindsay Ryan, a special educator at the high school, and physics teacher Haley Winsor.

Begun this year, the school-wide advisory initiative invites each student to join a weekly, passion-driven class of his or her choosing. Developed by teachers based on their own interests, class subjects run the gamut, from ice skating to gardening to SAT prep.

As animal lovers, themselves, Ryan and Winsor decided they wanted to lead a class that reflected their mutual passion for animal welfare.

“But they’re really the ones driving this,” Ryan said of the students. “We asked them what they wanted to do, we came up with some ideas and they decided they wanted to create blankets and collect supplies for the shelter.”

The classroom where they gather weekly was quiet Monday morning, as the students focused closely on making blankets, cutting slits around the edges of paired fabrics and carefully tying them together.

On a counter, boxes of treats and toys and food bowls sat, ready for donation. Students spoke beforehand to staff at the West Warwick Animal Shelter to determine what was needed. In addition to making the blankets, the class has also striven to collect those other supplies.

For Ryan and Winsor, it’s been a treat to witness the passion with which their students have tackled this project.

The students have been collecting donations and making the blankets for a couple of weeks now, having spent several weeks prior to that brainstorming.

“It’s great to see the students so passionate about helping the community and the animals,” Ryan said, adding that she plans to drop the supplies off at the shelter after school next Friday.

The West Warwick High School Paw Patrol is seeking donations of treats, toys and food bowls, as well as monetary donations. Those interested in contributing to the cause can reach Ryan at lvryan@westwarwickpublicschools.com.