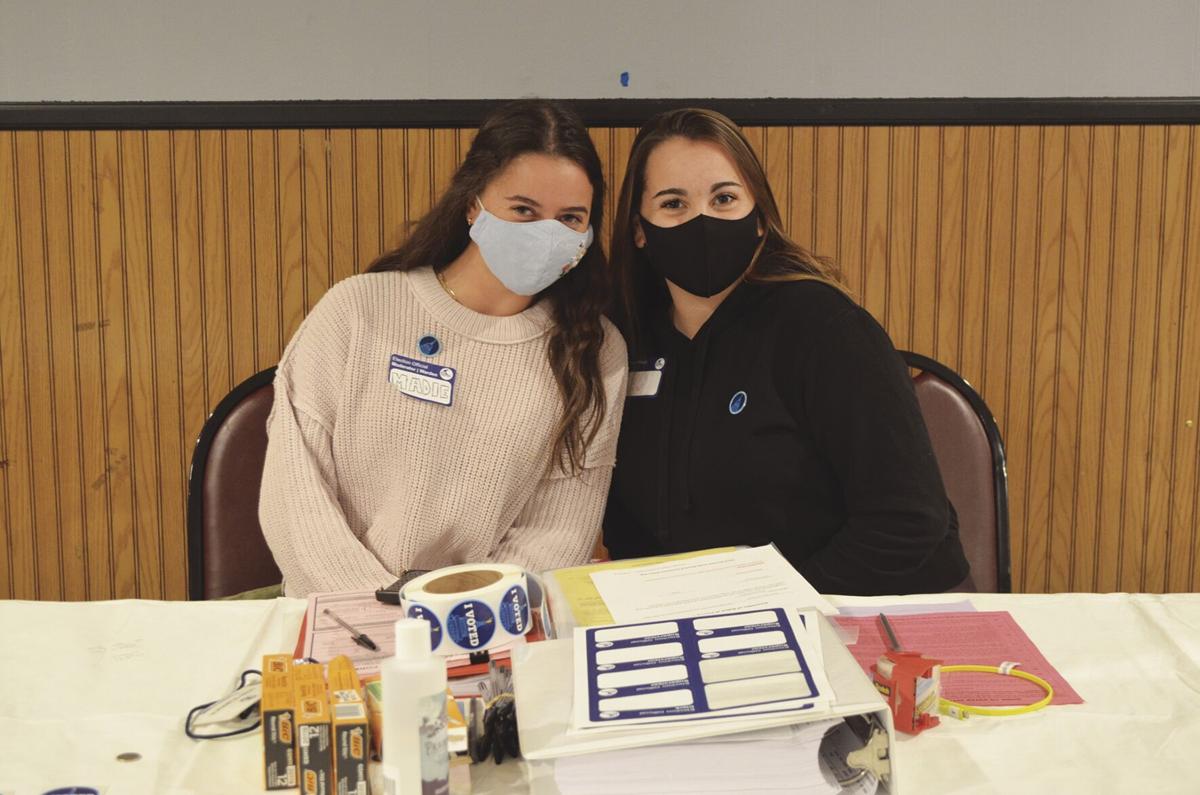 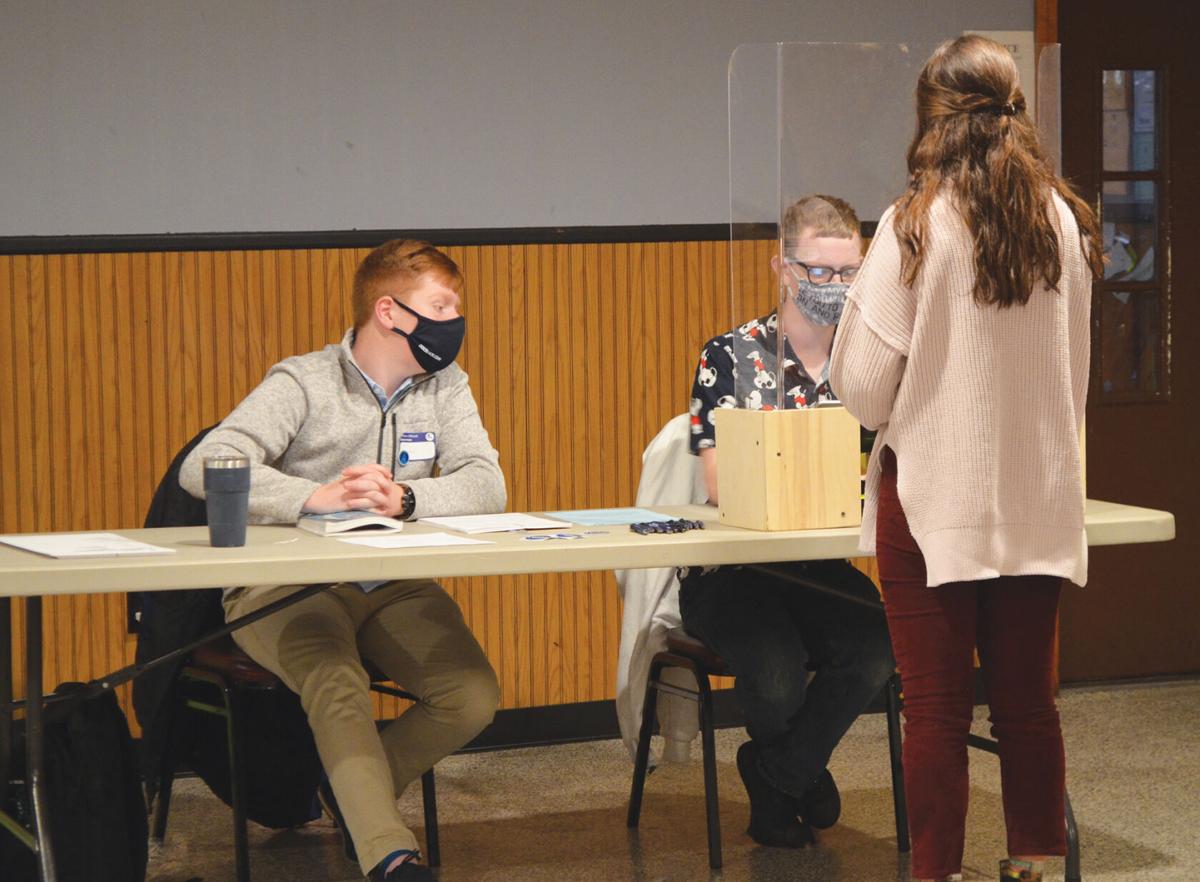 WEST WARWICK — At polling locations across West Warwick, local high schoolers sanitized surfaces, greeted residents and checked them in to vote. Some of the students weren't even old enough to vote, themselves, yet they played an invaluable role Tuesday in ensuring things ran smoothly during an Election Day that was unlike any other.

“I just wanted to help the community,” Olivia Fitts, a poll clerk and a senior at West Warwick High School, said Tuesday morning during a brief lull in activity at the Holy Ghost Society. “I love doing this, because you see a lot of familiar faces.”

This wasn’t Olivia's first election, either. Joined Tuesday by her older sister Madison Fitts, a junior at Brown University and 2018 graduate of West Warwick High School, Olivia has been working with the local board of canvassers for nearly two years.

“My sister helped me get into it,” Olivia said, a roll of “I voted” stickers on the table before her and Madison in the chair beside her. “Now everyone knows us — it’s fun.”

Olivia was one of around 15 West Warwick High School students — many of them seniors, since poll workers must be at least 16 — to lend a hand at one of the local polling places Tuesday.

For Brian Lynch, a West Warwick High School senior not yet of age to vote, donating his time to help others cast their ballots was an opportunity to ensure they had a positive experience at the polls.

“I’m too young to vote,” said Lynch, who turns 18 next month, “but I feel like working at the polls helps make sure that everyone’s voice is still heard, regardless of who they are.”

Lynch and his peers spent the entire day Tuesday at the Holy Ghost Society, from 6 a.m. until after the polls closed at 8 p.m. With a mask across his face and a name tag stuck to his shirt, Lynch sat behind a plexiglass barrier beside Grant Black, also a senior at the high school, using a tablet to check in voters as they arrived. At the next table, seniors Rachel Gosselin and Alexis Amaral also checked voters in; Michael Packer, a junior, waited nearby to sanitize the voting booths after each voter left.

The students were trained last month by the Rhode Island Board of Elections. Held via the Zoom video conferencing service, the training session taught students how to set everything up, as well as how to use the poll pads to find voters' information and to check them in.

The young poll workers were also able to clock service hours for National Honor Society, Olivia pointed out, and will get to add the experience to their resumes when they apply for college.

“Some of the poll workers have a long-standing tradition to work the polls and I’m sure our students will learn invaluable lessons while working the polls,” Hassell added. “Most importantly they will be able to witness their community coming together in the name of democracy.”

And their help was certainly appreciated.

“They do a great job,” Raymond Lambert, chair of the West Warwick Board of Canvassers, said Tuesday morning.

Most of the usual poll workers are older adults. But this year, many of the elderly residents who typically work opted out of it, said Lambert, who added that the students’ understanding of the technology is useful.

Madison started working at the polls in 2016, and has covered every local election and referendum since. When she started, she said, it was the first time that poll pads were being used in place of paper pollbooks. And as the youngest person there, she proved a valuable asset among the older poll workers who weren't as familiar with the new technology.

“Since then they’ve been coming to me, asking me to get friends to come help,” said Madison, a poll moderator and the oldest worker at the Holy Ghost Society Tuesday. “I think they’re starting to transfer over to using more high school kids because they understand [how to use the technology].”

With voters lining the sidewalk outside the town hall to cast their ballots early, Olivia was called to help out the day before the election, as well. More than 3,000 West Warwick residents voted Monday, she said, and she was anticipating another eventful day Tuesday.

“We expect to be busy all day,” Madison added, as voters trickled into the Holy Ghost."It's going to be a good turn out, compared to the primaries."

By 9 a.m. Tuesday, more than 60 voters had already checked in at the Holy Ghost — around as many, Olivia said, as had checked in to that location during the entire Primary Election. By the end of the day, the polling place, one of 10 in town, would see hundreds of voters.

“It’s nice to see, because we have a lot of first-time voters coming in,” Madison said. "That's super exciting — I remember my first time voting, and I can't wait until [Olivia] can start voting."

And while she always enjoys showing new voters the ropes, Madison said she also appreciates the work because it gives her an opportunity to encourage other young people to take part in the electoral process.

“I try to be an advocate to get my friends out here to vote,” she said. “So, if all these kids are volunteering, their friends can see how important it is to vote and to understand the process.”