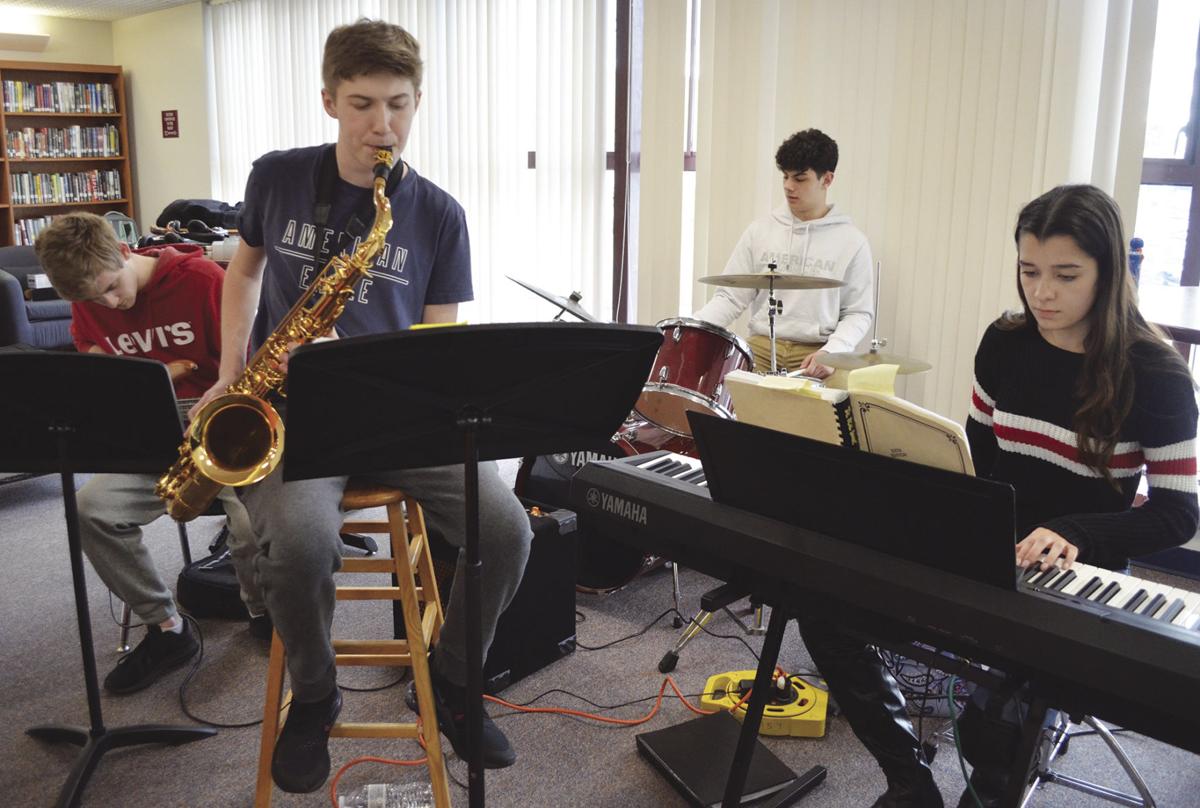 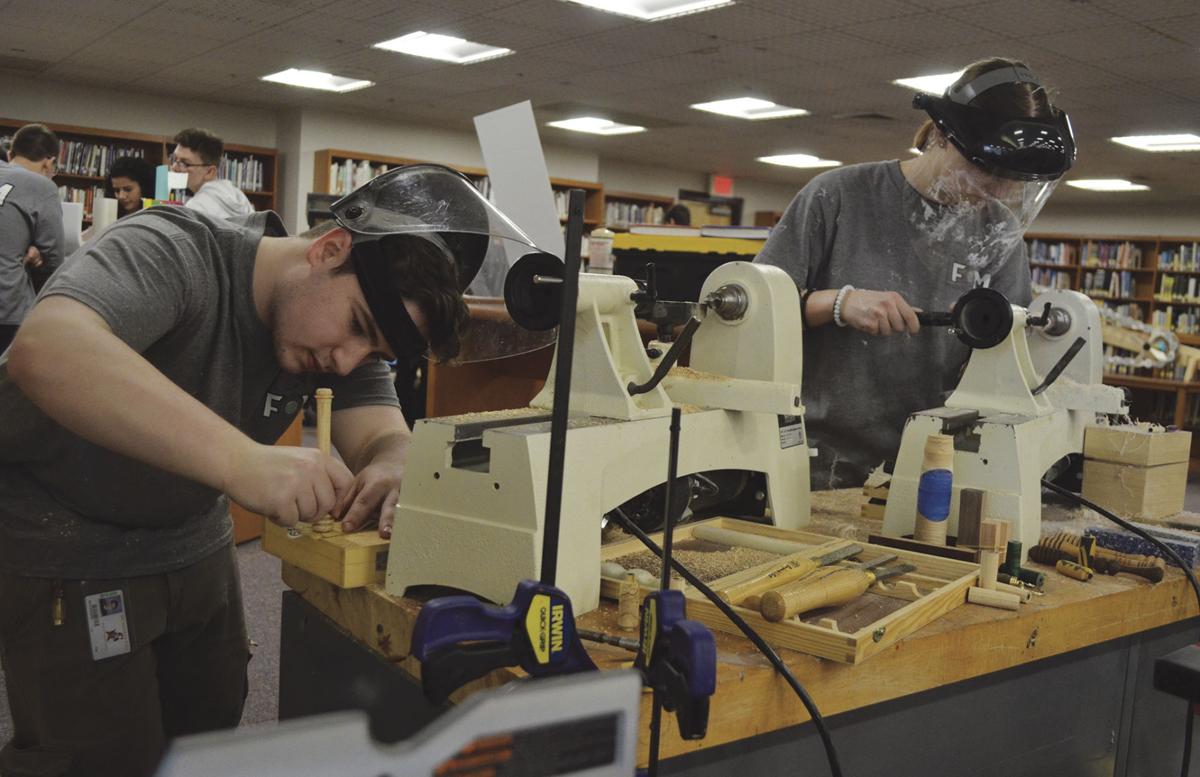 Seth Giguere, a junior, and senior Kate Defosse show what the Facilities, Operation and Management pathway has to offer. 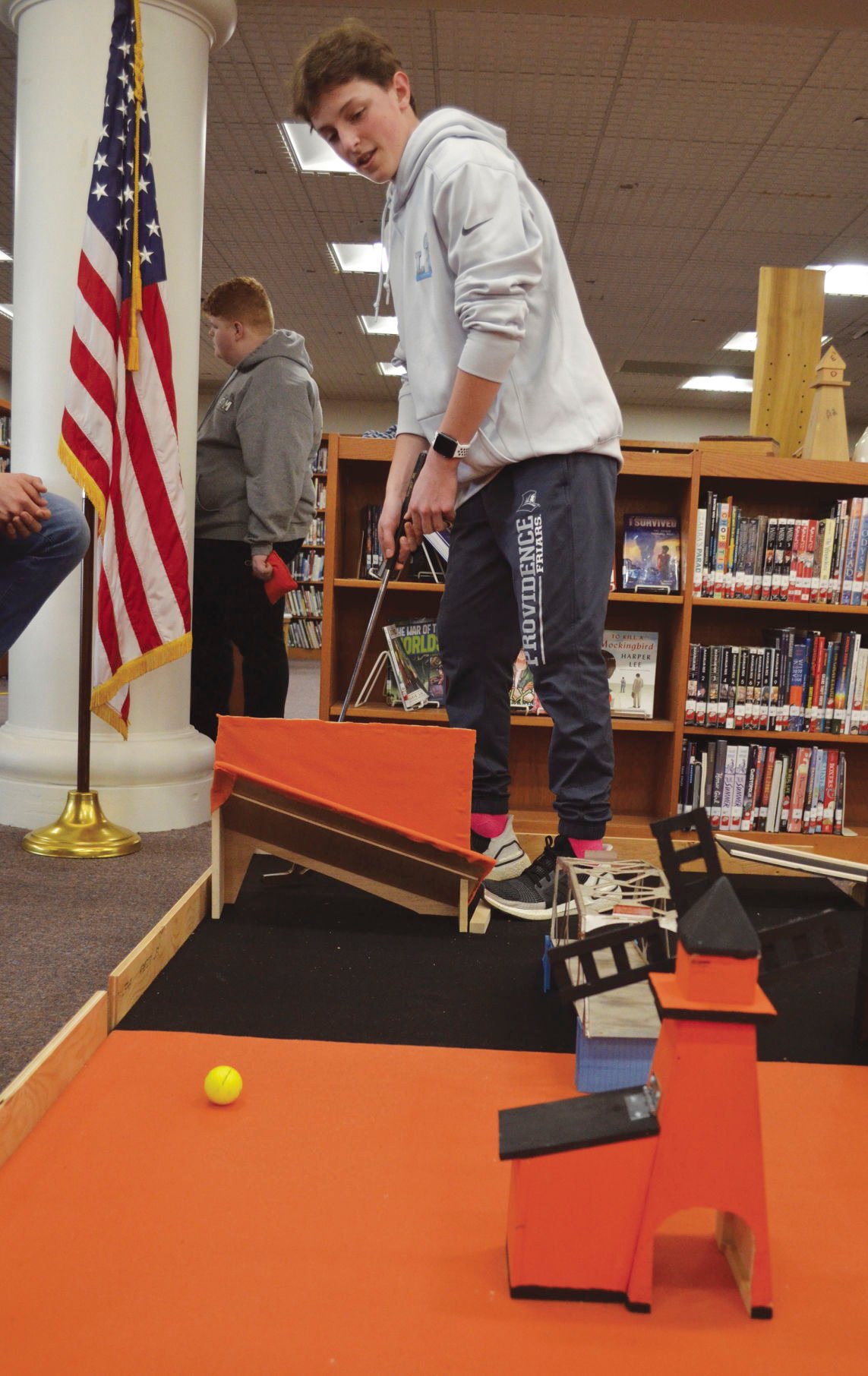 Tyler Garofall, an eighth-grader at Deering Middle School, tries out the mini golf set up by students in the high school’s Pre-Engineering pathway. 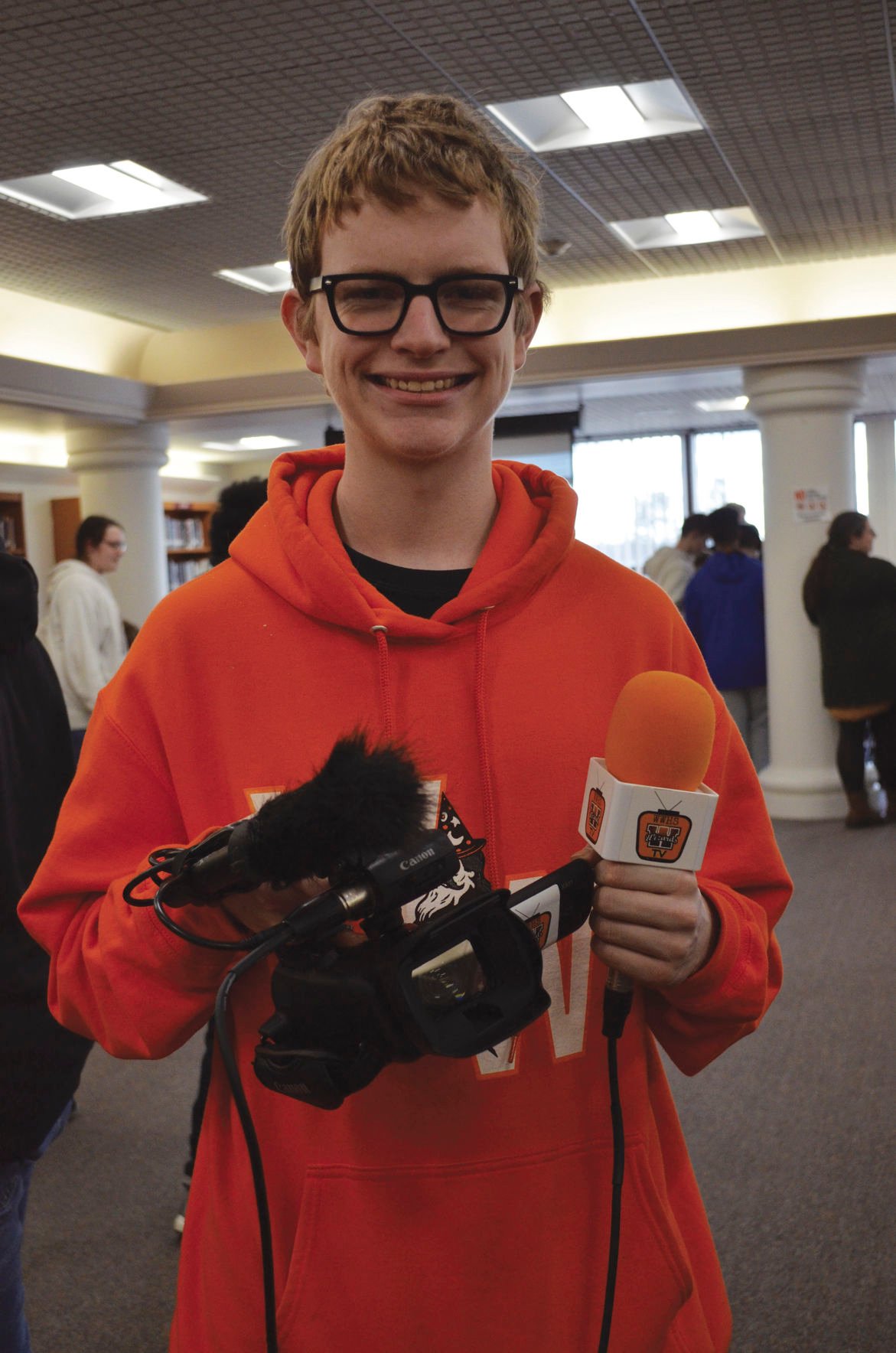 Brian Lynch, a junior, is in the Media Broadcasting and Journalism pathway.

Seth Giguere, a junior, and senior Kate Defosse show what the Facilities, Operation and Management pathway has to offer.

Tyler Garofall, an eighth-grader at Deering Middle School, tries out the mini golf set up by students in the high school’s Pre-Engineering pathway.

Brian Lynch, a junior, is in the Media Broadcasting and Journalism pathway.

WEST WARWICK — Soft jazz music echoed Thursday afternoon through the West Warwick High School media center, interrupted periodically by the gentle whirring of woodworking machinery, as eighth graders explored the opportunities that await them beyond their middle school classrooms during the Pathway Program and STEAM Fair.

The fourth annual event invited Deering Middle School eighth graders and their families to check out the 10 career and technical pathways currently offered at the high school.

“They’re working so hard, and they’re so passionate about their craft,” Principal Jessica Hassell said, as the participating high schoolers showed off the projects they’d worked so hard on. “They’re having real-world job experiences, working with industry professionals, they’re getting college credit — it’s huge for them to share all that with their peers.”

Students can enter a pathway as ninth graders, Hassell said, but most wait until they’re in 10th grade. And though it’s not required for students to choose a pathway, Hassell said that doing so ensures students will graduate having already earned valuable industry experience.

Having just added Bio Science and Emergency Medical Technician to the list of pathways, Hassell said she’s excited by the growing diversity in the opportunities offered at West Warwick High School.

“There’s something for everyone,” she said. “We really are able to offer our students such a diverse educational experience where they can find something they really love and are passionate about and then hone their craft in that one area while also getting the other graduation requirements.”

All over the media center Thursday, students in the various pathways programs had set up stations to help the visiting eighth graders understand their options as they prepare to enter their high school years.

Standing at the edge of the room beside a bunch of trophies won at economics competitions, seniors McKenzi Swanson and Bailey Waterman were eager to share their experiences in the Academy of Finance pathway.

“You learn all of the life skills you might need to succeed as an adult,” Swanson said of the program. “You learn how to do taxes, how to save and put away money.”

Joining the program, Swanson added, is “one of the best decision’s [she’s] ever made.”

“None of my other classes have ever gone into this much depth on the stuff you need to know,” she said, adding that the program has taught her important budgeting skills.

Waterman shared similar thoughts. She said she was driven by curiosity to join the program, and has enjoyed it so much that she now plans to study either business or law in college.

Nearby, Seth Giguere, a junior, and senior Kate Defosse stood at a couple of lathes, carefully turning wooden pens and key chains and honey dippers.

As students in the Facilities, Operation and Management pathway, Giguere and Defosse are learning all kinds of skills relevant to careers in the trades.

“We’re a jack of all trades program,” Giguere said, his face shield tilted upward. “We’re getting a lot of surface-level knowledge on things like plumbing, HVAC, shop work.”

Giguere, who hopes to eventually work as a carpenter, said he appreciates that the program is helping him to lay a solid foundation for his career.

Ninth-grader Peter Martin, meanwhile, joined the Facilities and Operation Management pathway for a different reason. Martin has nearly achieved the rank of Eagle Scout, and he said his deep interest in the outdoors led him to the program.

“I love to build stuff outdoors,” said Martin, who added that he “fell in love” with the program after being introduced to it.

On the other end of the room, students in the Music and Performing Arts pathways performed jazz music and invited visitors to dabble with creating their own musical compositions.

There are two music pathways offered at the high school: Music Education and Performance and Music Technology.

For Gabriel Calcagni, a senior who hopes to pursue a career as a music teacher, it’s been “fantastic” to learn all of this while still in high school.

“It’s a dream come true because not only am I saving money, I’m also learning about what I want to learn about,” he said, as the smooth sound of a saxophone filled the air around him.

Calcagni plans next year to take his general education classes at the Community College of Rhode Island before continuing his education at Providence College. And because the digital audio recording course he’s currently enrolled in offers college credits, Calcagni won’t have to pay to take the class in college.

As Calcagni stood at the music station, students in the Pre-Engineering pathway were challenging the visiting eighth graders to a round of mini-golf on a course they’d designed and built themselves.

“I like creating and designing stuff like this,” senior Justin Firth said, sitting beside the course, an orange and black maze that ends at a miniature windmill with movable blades.

The students created the mini golf course in their Computer-Animated Design, or CAD, class.

“Making a golf course - first drawing it, then putting it on the computer, then actually building it - was a lot of fun,” junior Eduardo Lopez said.

“We wanted it to be fun and enjoyable, and not too tricky,” Firth added of the course, created in just under two weeks.

Finding the time to bring the course design to fruition was the most difficult part of the project, senior Casey O’Connell added.

“And maybe one day we’ll be making a building, or something,” Firth said.