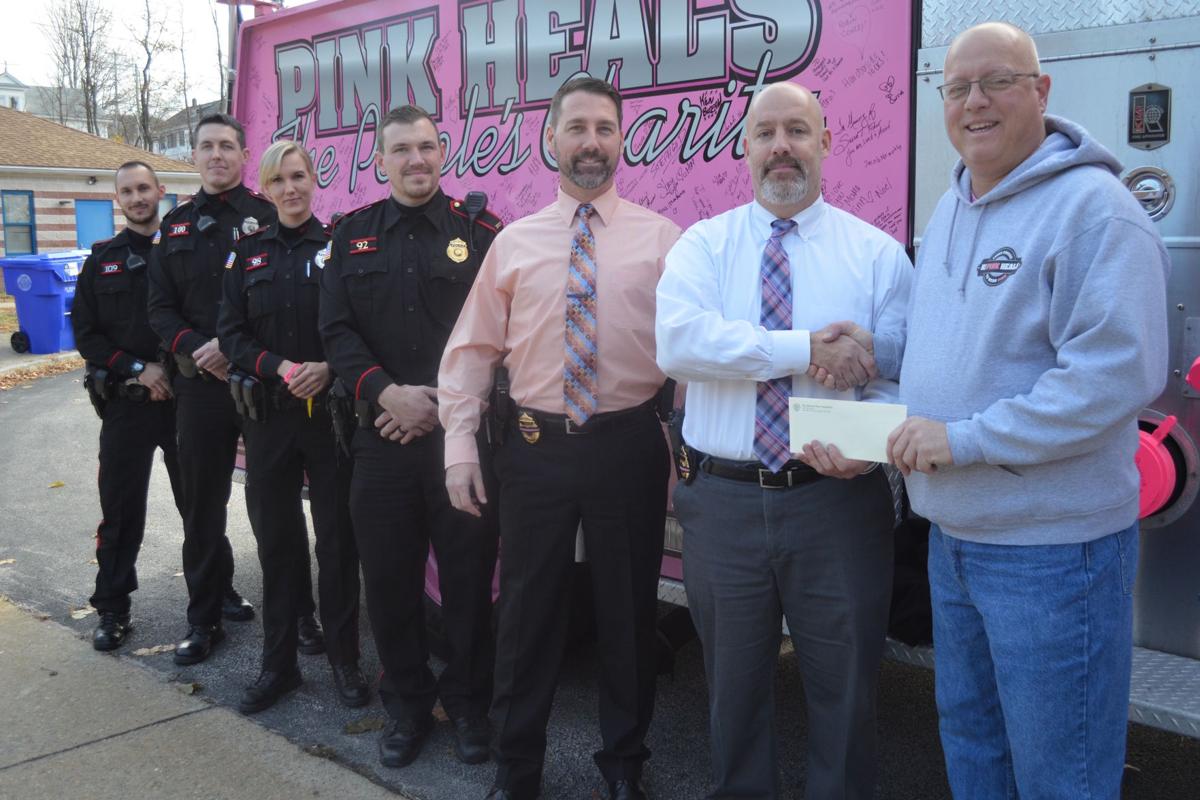 Chris Seelenbrandt, president of the Rhode Island Pink Heals, receives a check for $2,356 from Major Ernest Lavigne of the West Warick Police Department. 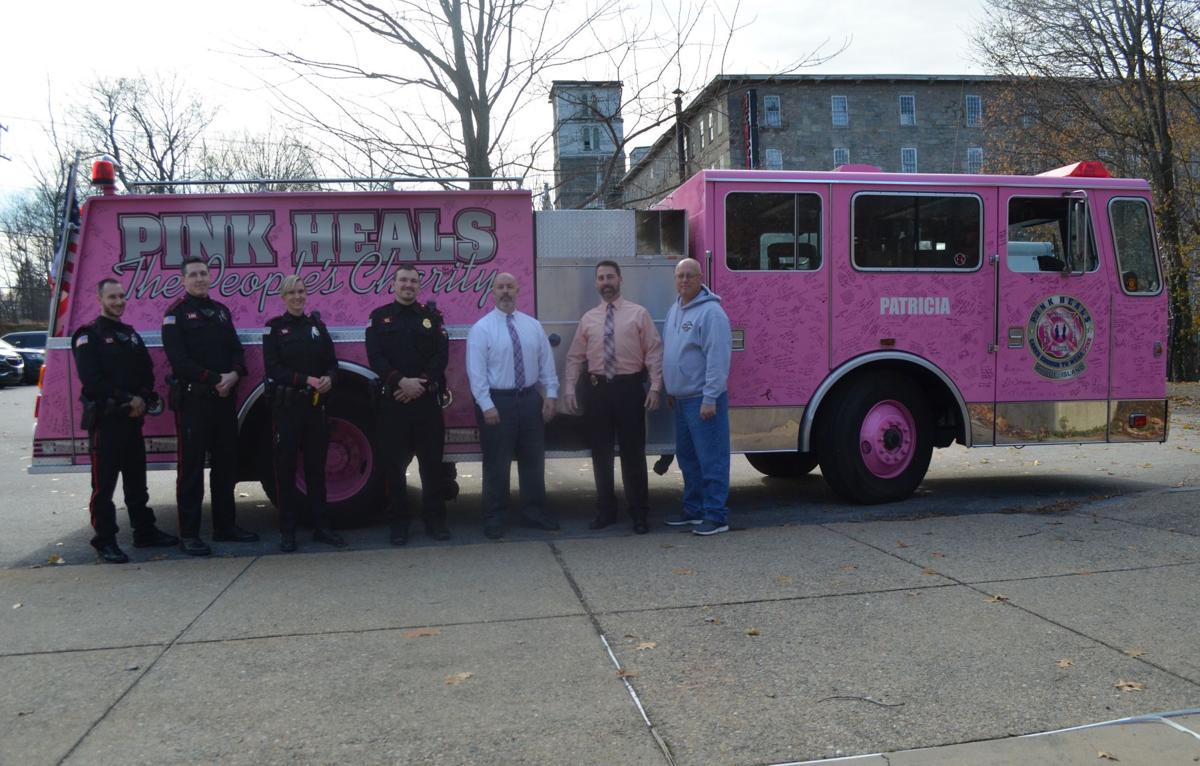 Chris Seelenbrandt, president of the Rhode Island Pink Heals, receives a check for $2,356 from Major Ernest Lavigne of the West Warick Police Department.

WEST WARWICK — More than two years later, Major Ernest Lavigne of the West Warwick Police Department still gets choked up thinking about the day when Pink Heals delivered a flower bouquet to his mom.

“She loved it,” said Lavigne, who in 2017 lost his mom to lung cancer. “I’ll always cherish those memories and that day.”

“If that money can go to help somebody pay their electric bill because they’re in chemotherapy, or pay for their medication, or pay for a taxi because they’ve got to go back-and-forth,” Lavigne said, “if it can help someone who needs it — I think that’s paying tribute to my mom.”

Throughout the months of October and November, West Warwick police have worked hard to raise funds to support Rhode Islanders affected by cancer.

“For us, as an agency, we want to do what we can to help people locally,” said Lavigne, who was joined Monday by Mark Knott, chief of the West Warwick Police Department, as well as a few of the officers who helped raise the funds. “And who doesn’t know somebody who’s been touched by cancer?”

The funds were raised in part by selling pink “remembrance bands” for officers to fit around their badges, as well as by selling Pink Heals merchandise.

Police are also raising money for the organization through their “No Shave November” campaign, and a “double-down December” challenge next month will benefit Operation Stand Down Rhode Island, a nonprofit that supports local veterans in need.

Through those efforts police are hoping to raise more than just funds, though — the hope, Lavigne said, is to also raise awareness.

“We want to raise money to help people, but we also want other people to know that if they’re going through a tough time, they can reach out to Pink Heals for assistance,” he said. “If they want to donate, that’s great, too.”

Founded in 2009 by Ted Dion, a Central Coventry firefighter, the Rhode Island chapter of the national Pink Heals organization was established to provide support for cancer patients and their families while inspiring others to do the same.

“Men, women, children, doesn’t matter,” Seelenbrandt said, just after receiving the donation Monday. “They’re going through treatments, having a hard time making ends meet, they can reach out to us for help. And this money allows us to do that.”

Lavigne said he appreciates that Pink Heals benefits Rhode Islanders directly. And because the nonprofit is run completely by volunteers, he added, all donations go right to the cause.

“With these donations, we turn around and put it right back into the community,” Seelenbrandt said, adding that Pink Heals gets its funds through various fundraising efforts statewide and merchandise sales.

“It’s great to have West Warwick supporting the people of West Warwick,” Matt Medeiros, treasurer of the organization, chimed in.

This year alone, Rhode Island Pink Heals has helped some 150 cancer patients, Medeiros added, with a maximum of $1,000 spent on each.

So donations like the one from the West Warwick police go a long way.

“What the police do for us is just awesome, because now we can help more people,” Seelenbrandt said. “Two thousand and change — that’s a couple families that we can make an impact on.”

And it will be through similar acts of generosity that the chapter may eventually meet its goal of opening the first Pink Heals fire station and community space.

Looking through photos on his cell phone, Lavigne recounted the day in July of 2017 that his mom, Diann Lavigne, was paid a visit by the national Pink Heals tour.

“It was such a touching moment for us,” he recalled of the occasion, which Seelenbrandt organized.

In addition to helping cancer patients financially, Pink Heals makes free flower deliveries by request to both survivors and those currently in treatment in hopes that it might bring some positivity to their day.

“That’s what it’s all about,” Seelenbrandt said. “When you can bring a smile to their face and let them forget about everything, even for 10 minutes.”

In a few of Lavigne’s photos, his mom is standing by her front porch, only two weeks before she died, receiving hugs from cancer survivors who’d come to show their support.

“Having survivors that are part of our organization, they know what these people have been through and can relate,” Seelenbrandt said.

In another photo, Lavigne’s mom stands with Seelenbrandt and a few other pink-clad firefighters, a pink truck as their backdrop. Amid myriad messages of love and thanks written across the truck, one message reads “stronger together, the Lavigne family.”

“This means a lot to them,” Lavigne said of the cancer patients, “but it means way more to the families.”

And it’s that positive impact the organization has had on patients and their families, alike, that drives Seelenbrandt, Medeiros, and the other Pink Heals to continue doing what for years they’ve been doing.

“I wish this was around when my mother went through it,” Seelenbrandt said. “I know it could have made a difference to her.”

For more information about Rhode Island Pink Heals or to fill out an application for assistance through the organization, visit ripinktrucks.com.