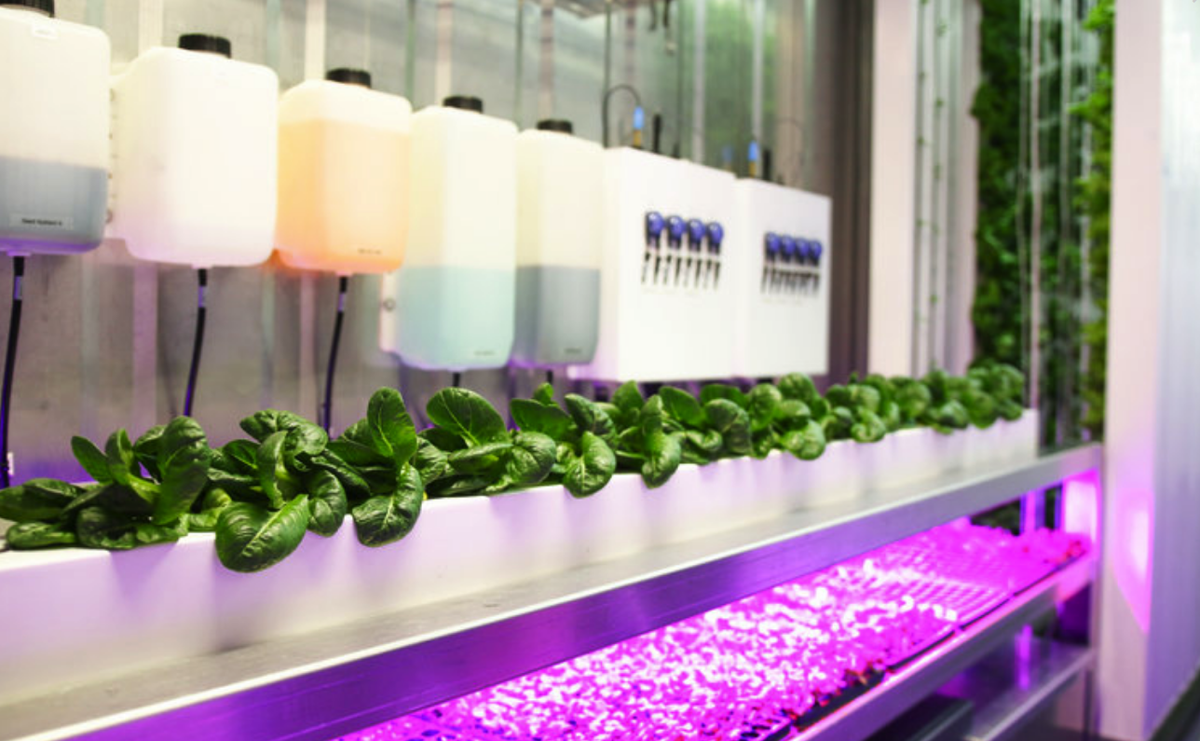 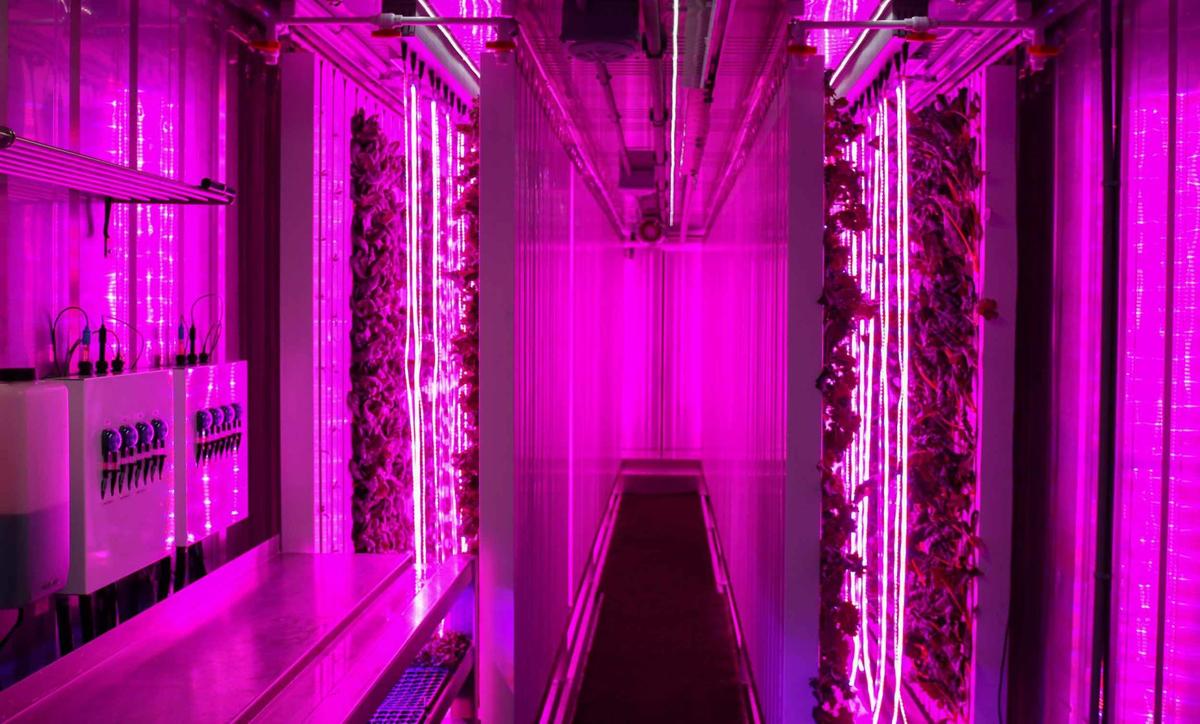 A view inside a Leafy Green Machine farm.

A view inside a Leafy Green Machine farm.

WEST WARWICK –– The West Warwick School District is no stranger to leading the way in educational innovations, and thanks to a partnership with their food service provider, Sodexo, West Warwick High School is now the second high school in the state to implement a campus hydroponic farm from Freight Farms.

Sodexo and the school department teamed up to purchase “The Leafy Green Machine,” which is now in operation on the high school campus. The only other school-operated Leafy Green Machine in Rhode Island is located at Cumberland High School.

The Leafy Green Machine, created by Freight Farms, is essentially a “farm-in-a-box.” It’s a 40-foot shipping container outfitted with all of the tools and equipment necessary to run a productive hydroponic indoor farm. The system uses 90 percent less water than traditional farming methods and requires no soil, fertilizer or other planting materials to produce fresh, crisp and flavorful plants year round in a temperature controlled environment.

Hydroponics is the cultivation of plants by placing roots in liquid nutrients rather than soil. There are different types of hydroponic systems, and the Leafy Green Machine uses two — drip irrigation and ‘ebb and flow’. The plants are placed on a vertical growing medium, or tower, and the farm’s emitters drip water and nutrients onto the crops, which trickles down to the roots. Any water that isn’t consumed by the plants flows to the bottom and is recirculated back into the plants. The farm uses only five gallons of water per day. The plants are surrounded by LED lighting to provide the optimal wavelengths of light required for photosynthesis.

The machine also has a seeding station, a shallow trough with enough space to hold up to 12 trays of seedlings. The trough gets filled with water and is allowed to drain several times a day. Using the “farmhand” platform, farmers, or in this case school staff, can get real time data from sensors and in-farm cameras and even remotely control the farm from their phones.

Right now staff and teachers are working on a crop of rex and butterhead lettuce planted in mid August that they eventually hope to be able to harvest and use for school lunches. According to Freight Farms, the farm should be able to produce up to 150 pounds of produce per week. It is expected to put out around 500 full heads of lettuce a week; 60 to 100 pounds per week of hearty greens or 35 to 80 pounds per week of herbs.

West Warwick High School Science Teacher Hailey Windsor gave a brief presentation to school faculty and staff Wednesday afternoon to talk about ways they can implement the Leafy Green Machine into their curriculum. She said that although the food produced in the farm can’t technically be classified as “organic” because of strict regulations, there are still no pesticides are used, and she’s willing to bet what they grow is still better than your typical store-bought produce in terms of chemicals.

According to West Warwick Public Schools Director of Education Reform, Compliance and IT, Jim Monti, the Leafy Green Machine is really an extension of something the school district is already doing in its elementary schools - creating and maintaining hydroponic farms in the second grade elementary school classrooms. It’s all part of the district’s effort to provide more experiential learning opportunities to students.

“Every grade two classroom has tower gardens that fit right in with this,” said Monti. “We’re trying to get the kids in science all the time. Their system is a smaller version of this Leafy Green Machine.”

Monti said the farm is “quite prolific” and claims it can generate enough produce to fill Gillette Stadium over the course of a year.

“I think there’s a lot we could end up doing with this,” he said.

Sodexo and the school department plan on holding a formal harvest celebration some time next month. Their goal is to eventually have the farm produce enough to supply all of the district’s schools with produce.

Thanks for sharing this post. I am very interested in this topic. I would like to share my opinion on this. mycannabisclothing Observing a Tai Chi practitioner as they undergo a mix of gradual, Watching them, as they transfer in an nearly hypnotic and managed gradual movement circulation (which nearly appears easy) whereas in a meditative state is actually fascinating and considerably mysterious. As an accomplish Martial Artist and a Licensed Private Coach, I've at all times been drawn to and really intrigued by this historic Chinese language Thoughts-Physique artwork of Tai Chi.

Thanks for sharing this post. I am very interested in Machine . I would like to share my opinion on Machine . By the early twentieth century, the event of the mycannabisclothing steam engine and the diesel engine ended the age of business crusing ships. The manufacturing of iron and metal for cable and ships' hulls additional eradicated pure fibres in marine use.

Thanks for sharing this post. I am very interested in Machine . I would like to share my opinion on Machine . By the early twentieth century, the event of the mycannabisclothing steam engine and the diesel engine ended the age of business crusing ships. The manufacturing of iron and metal for cable and ships' hulls additional eradicated pure fibres in marine use.

The easy job of sending and receiving emails wouldn't be attainable for therefore many customers, best chainsaw chains with out using the wi-fi modem router. It has helped to simplify the way in which we entry the Web inside our houses and at our locations of labor.

Thanks for sharing this post. I am very interested in machine. I would like to share my opinion on machine........https://www.studytonight.com/post/few-new-trends-in-web-development-in-2018If you really feel like writing them down, take notes on each thought, phrase and phrase that involves your head and pertains to the subject of your essay. Make the spine to your essay.

Thanks for sharing this post. I am very interested in Machine I would like to share my opinion on Machine. The Vitamix 5000 or Vitamix 5200 fall within the class of top of the range blenders as they're properly constructed Uncut, best rowing machines 2018 frozen fruits will be decimated in these blenders.