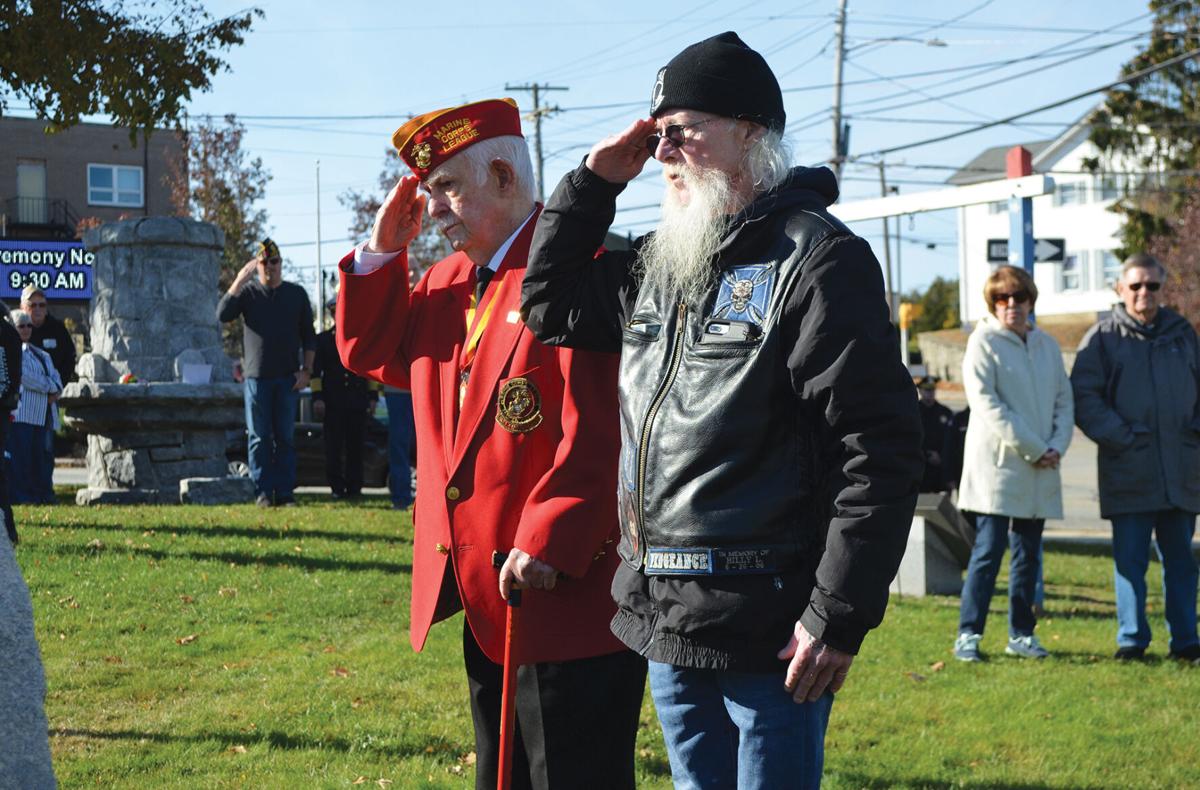 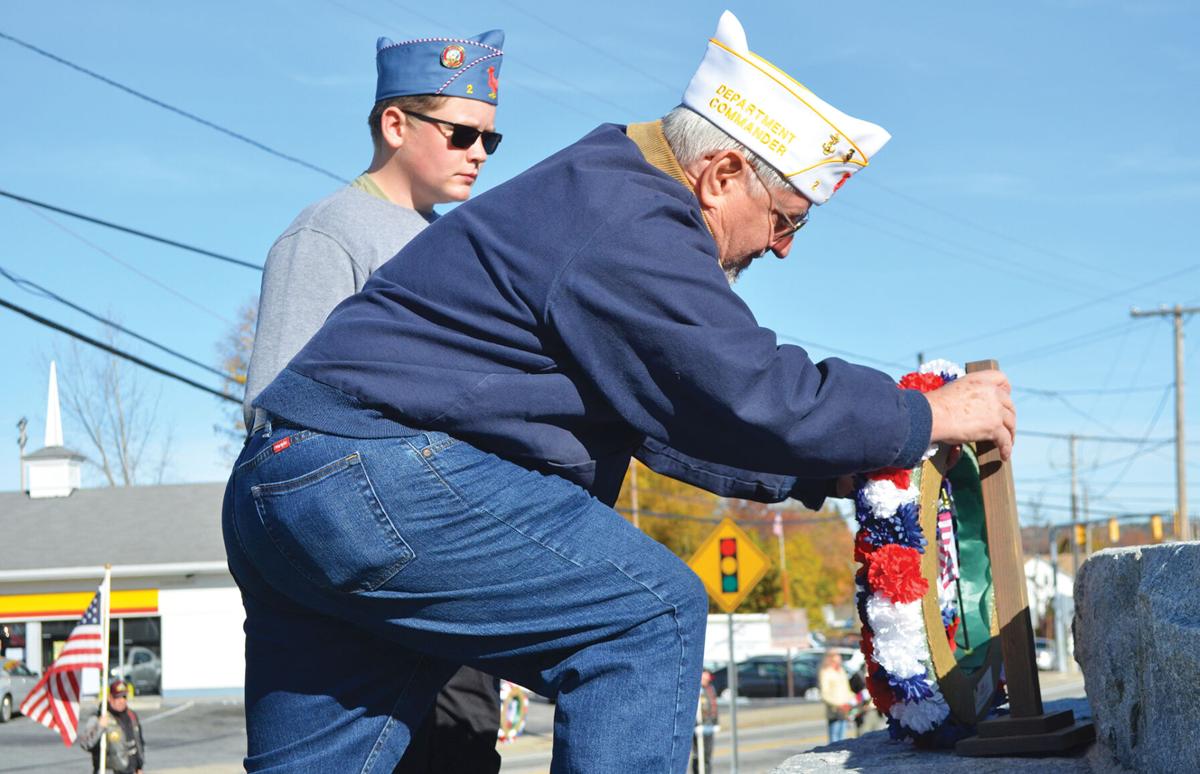 Nathan Scott, of Sons Squadron 2, and David Singleton, of the American Legion Post 2, place a wreath on the WWI monument. 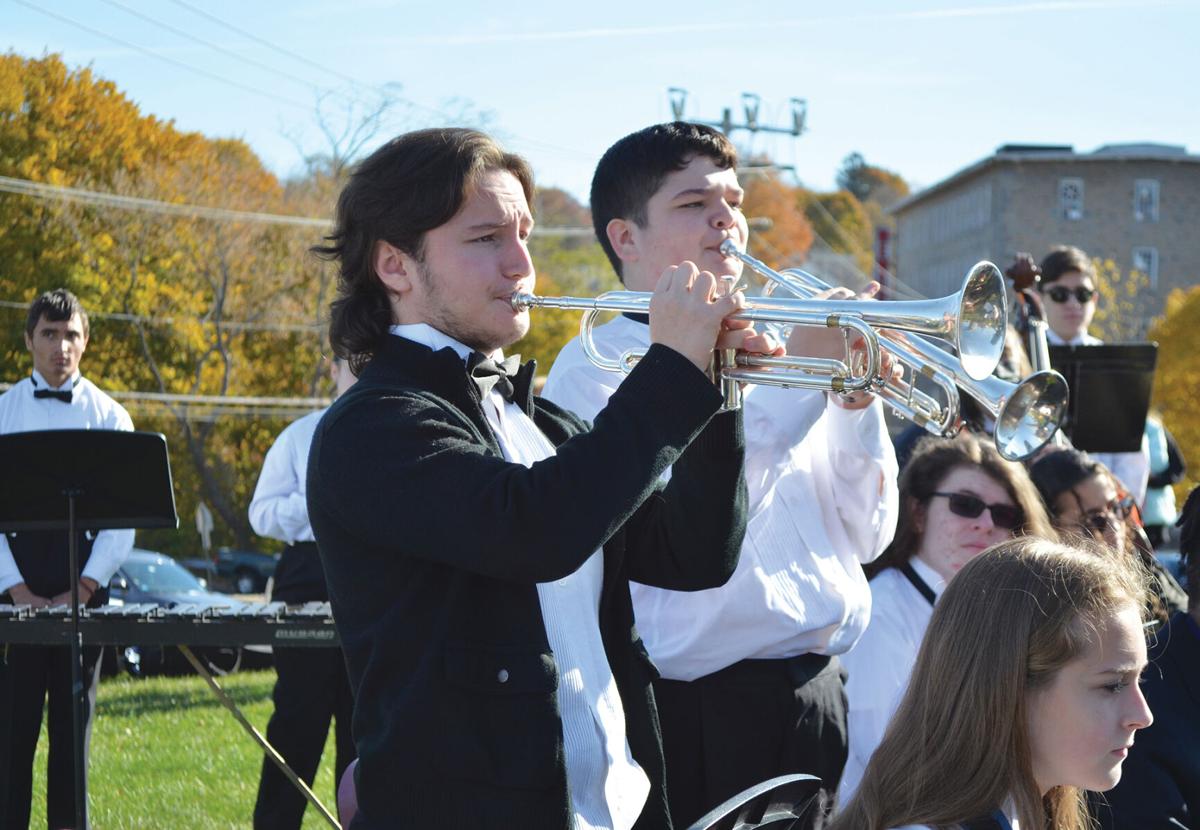 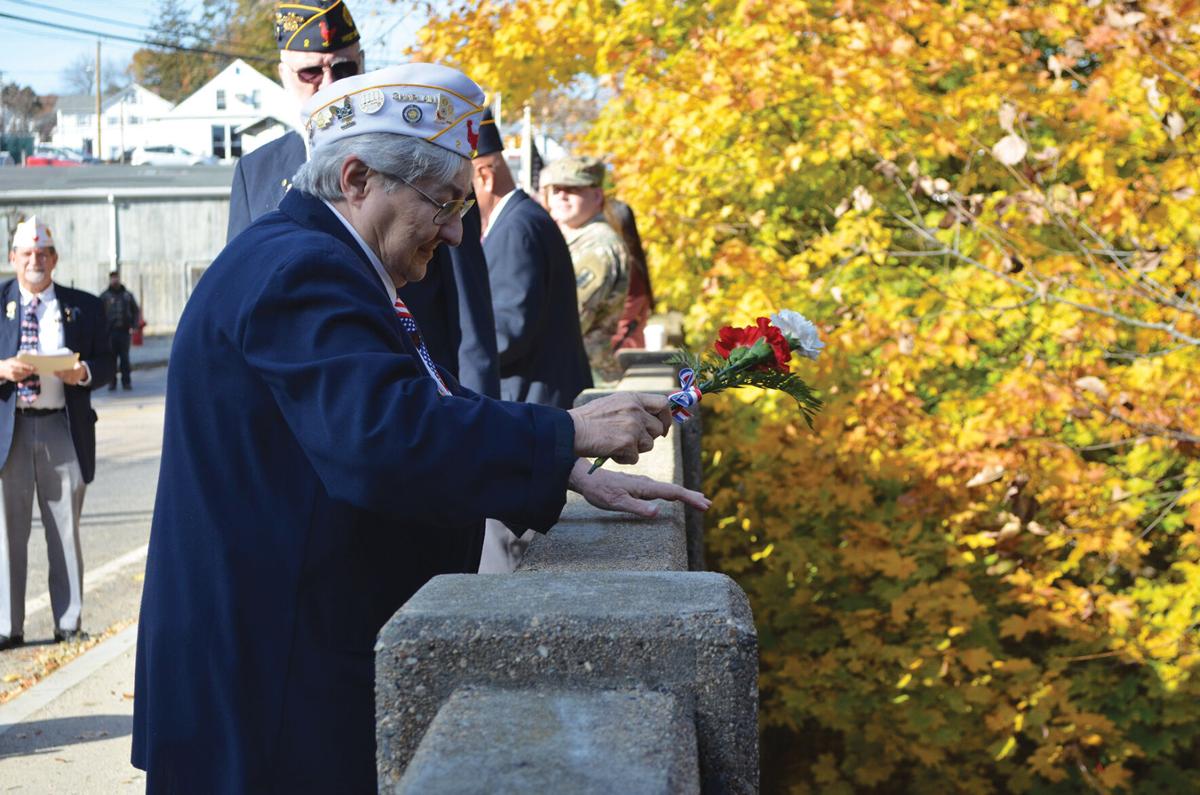 Ellen Schierschmidt, a Navy veteran, tosses flowers into the water for those lost at sea. 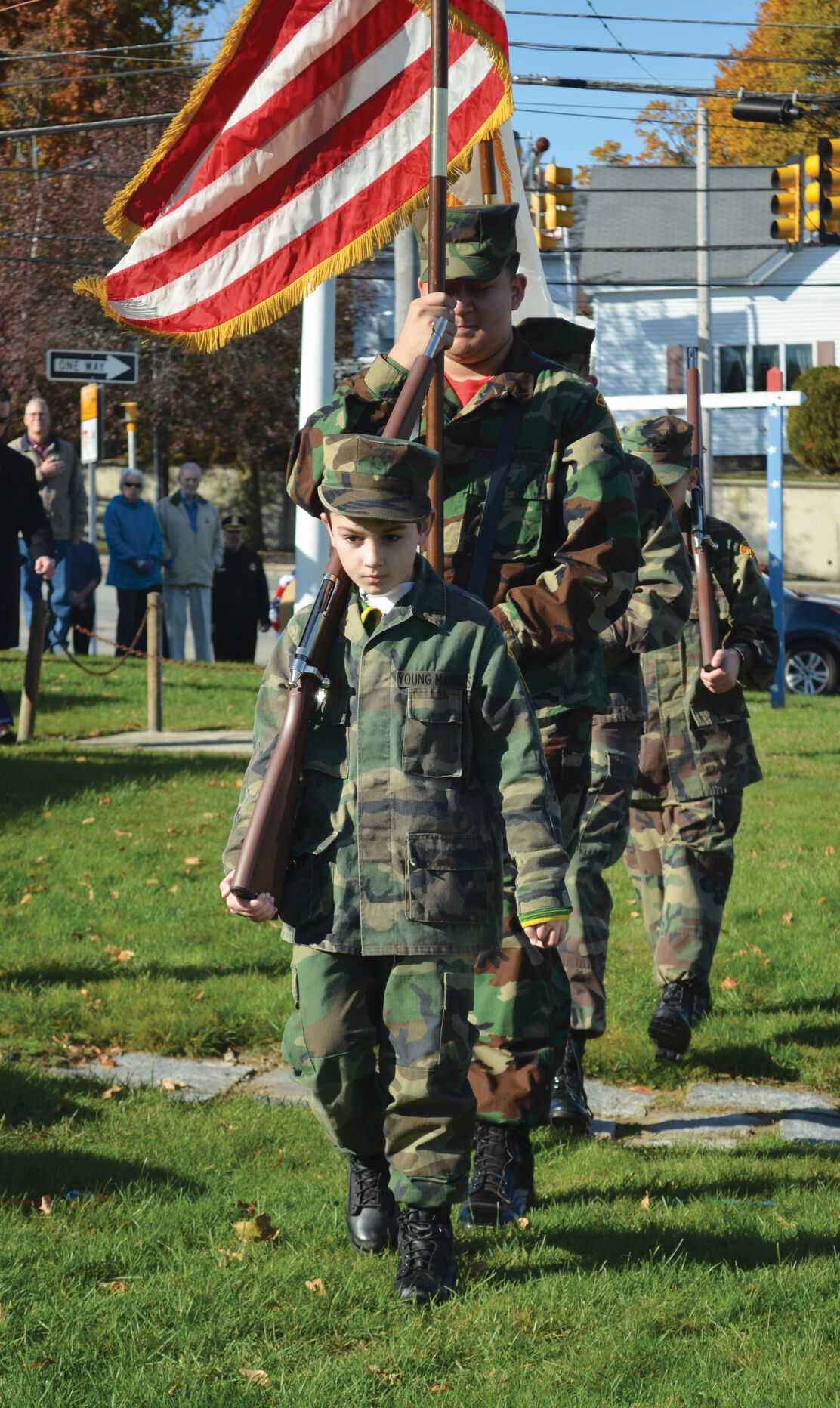 Members of the Rhode Island Young Marines retire the colors. 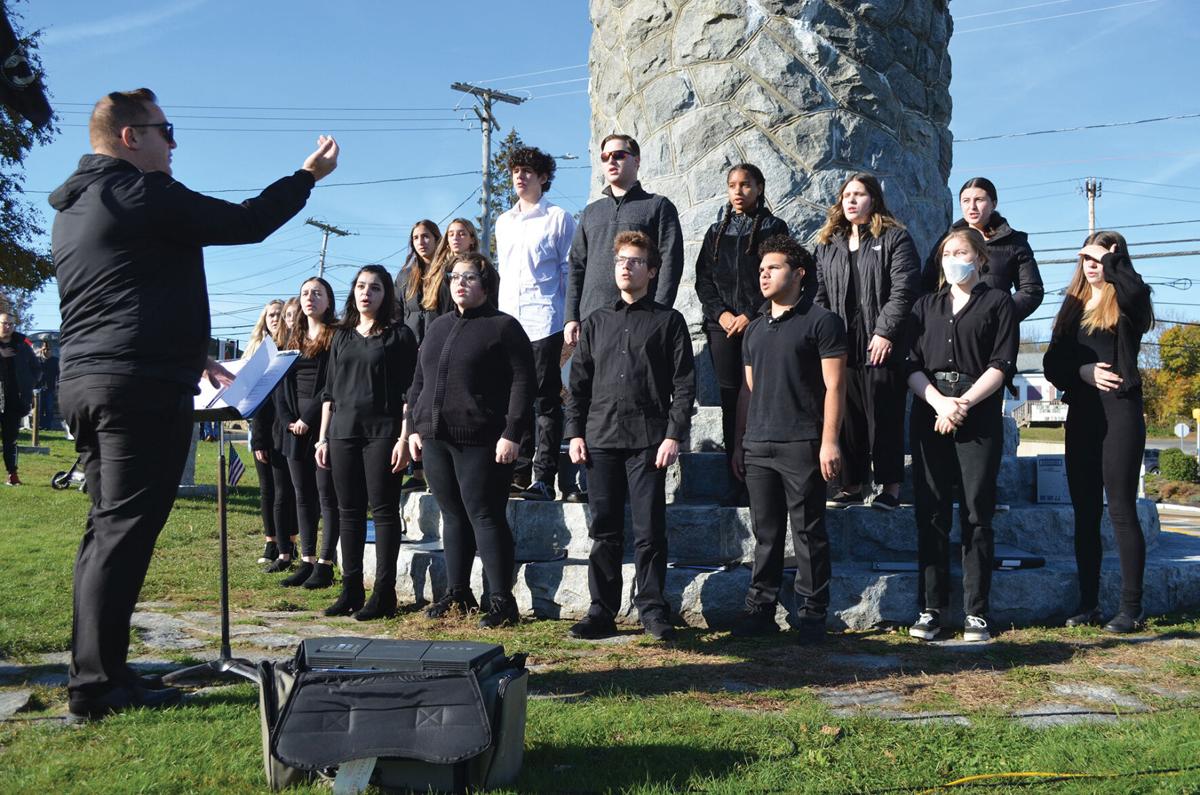 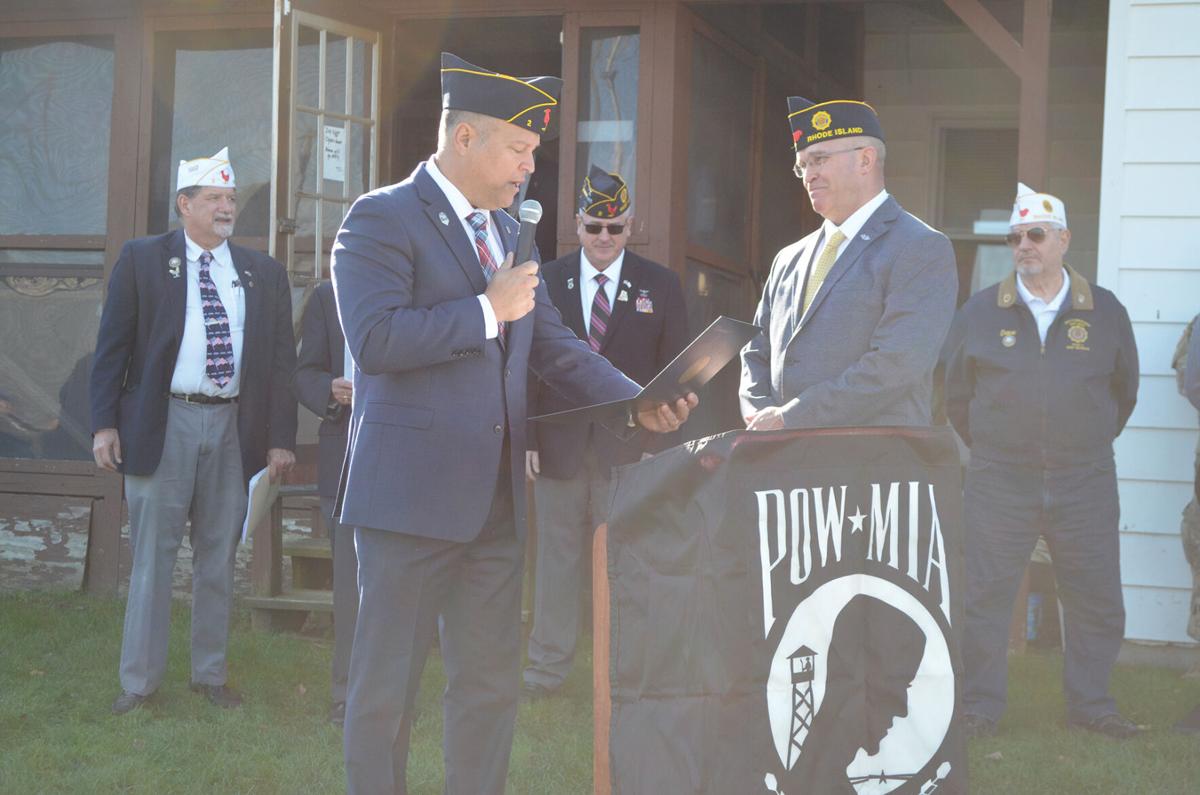 Nathan Scott, of Sons Squadron 2, and David Singleton, of the American Legion Post 2, place a wreath on the WWI monument.

Ellen Schierschmidt, a Navy veteran, tosses flowers into the water for those lost at sea.

Members of the Rhode Island Young Marines retire the colors.

WEST WARWICK — Community members came together Thursday in West Warwick Veterans Memorial Park, where wreaths were placed, stories were shared and homage was paid to all who have answered the call to serve.

“Our veterans have given us freedom, security and the greatest nation on earth,” Sgt. Maj. Robert Sturdahl said during the annual observance, standing at a podium outside American Legion Post 2. “It is impossible to put a price on that. We must remember them. We must appreciate them.”

The ceremony opened with a posting of the colors by the Rhode Island Young Marines. The West Warwick High School Concert Chorale sang the National Anthem; Chaplain Ryan Little, a captain in the Army National Guard, delivered the invocation.

Donald Cunningham, who acted as Master of Ceremonies, welcomed those gathered and recognized the elected officials, local leaders and Gold- and Blue Star families in attendance.

Following an introduction by Charlie Petrarca, Sturdahl delivered his address.

A Gulf War veteran who also did two tours in Afghanistan, Sturdahl officially hung up his hat on Veterans Day five years ago. He chose that date to retire, he said, in honor of all who had stood alongside him over his decades of service.

“Uniformed service, by its nature, is temporary,” Sturdahl said. “But the legacy of that service benefits generations to come.”

Sturdahl recalled the eight years that he served as a commander.

“With that responsibility, you accept that those under your charge may become sick, injured, or even killed,” he said. “What I was not prepared for as a leader is the rate we are now seeing of veteran suicides.”

Since 2010, some 65,000 veterans have died by suicide, the White House said earlier this month.

Suicide prevention is a top priority of the American Legion, said Sturdahl, who touted “buddy checks” as an effective tool. The organization launched its Buddy Check program in 2019, encouraging post members to check in with their fellow veterans to see how they’re doing.

“Reach out to a friend today who made an excuse not to be here,” Sturdahl said, adding that he had already made a phone call to someone that morning. “I stay in contact with my buddies, and they check on me.”

Assisting veterans in getting help from the Department of Veterans Affairs and other trained professionals could also save lives, he said.

“This is our honor and our duty to each other,” he said. “We must remove all stigma associated with asking for help, or being diagnosed with depression, PTSD or any other anxiety disorders associated with your time in service.”

It’s important, he continued, to ensure that all veterans “know that you are a friend and can be counted on when they need you most.”

Hiring veterans, patronizing veteran-owned businesses and donating to veterans organizations are a few other ways one might show support to those who served, Sturdahl said.

As Sturdahl wrapped up his remarks, Rep. Tom Noret (D-Dist. 25, Coventry, West Warwick) presented him a citation from the state House of Representatives recognizing his distinguished service as a three-tour combat veteran and congratulating him on his retirement.

The West Warwick High School Band performed “Balladair,” and from the base of the World War monument, the concert chorale sang “We Honor You.”

Veterans of World Wars I and II, Korea, Vietnam and the Global War on Terror were thanked Thursday, a wreath placed at the monument of each; wreaths were laid for American women, for Rick Crudale and all others lost in Beirut, and for prisoners of war and those missing in action.

Kenneth McMillan, a senior at West Warwick High School, and Sebastian Rosa, a sophomore at the high school, stood to play Taps, the bugle call echoing across the park as veterans stood in salute.

The ceremony concluded with a walk down to the Francis J. LaChapelle Bridge, where Ellen Schierschmidt, a Navy veteran, tossed flowers into the Pawtuxet River in honor of those lost at sea.