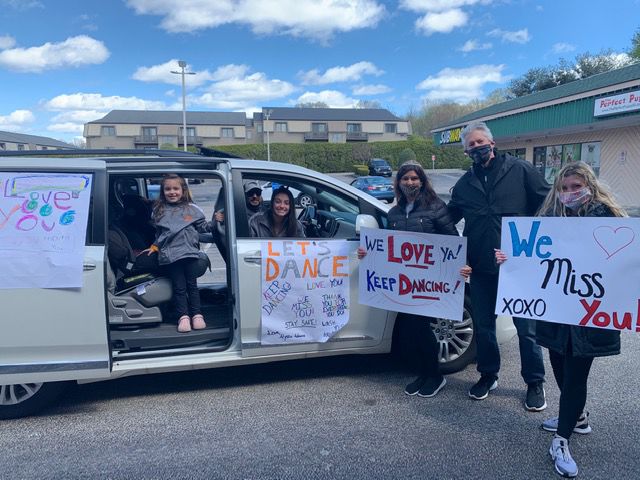 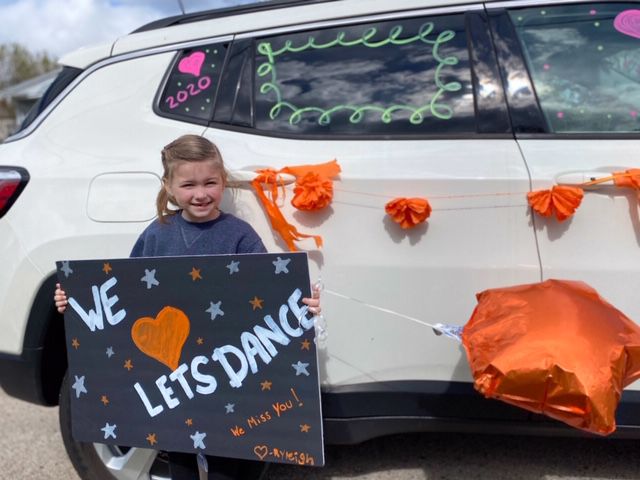 Ryleigh Plante holds up a sign during the parade Saturday.

Ryleigh Plante holds up a sign during the parade Saturday.

WEST WARWICK — Having dedicated more than three decades to teaching Rhode Islanders to dance, the Coburns have really missed seeing their students since two months ago the COVID-19 pandemic caused them to close the doors to their West Warwick studio.

"We have never been away from these dancers for so long,” said Gary Coburn, who owns Let’s Dance Studio with his wife Angela.

But while they aren’t currently able to hit the dance floor together, a drive-by parade through the studio’s parking lot Saturday offered the dancers, their families and the studio’s directors a chance to at least cheer one another on.

“The first couple that came through, I admit, I cried,” Angela Coburn said Monday as she recounted the stream of nearly 150 vehicles.

One car after another filed slowly into the parking lot at 289 Cowesett Avenue, each decorated with balloons and streamers and boasting messages like “best dance studio!” and “we love Let’s Dance!” Dancers held hand-made signs from open windows, waving and smiling as they rode through.

“These kids are more than our students — they are family to us,” Angela said. “This was so heartwarming.”

Angela and Gary Coburn opened Let’s Dance 32 years ago, and have been operating the dance studio from the same plaza since. Driven by her innate love for teaching dance, Angela had always known she wanted to open her own studio.

“It’s just so fulfilling to see these kids grow up and go on and be successful,” she said.

So being unable to see the dancers every day, she added, has been tough. And to see many of them in-person Saturday — even if only from afar — meant a lot.

While the event offered a way for Angela and Gary to give greetings and thanks to the dancers and their families, it was also an opportunity to honor the seniors who have had to miss out on their final year at Lets Dance Studio.

Seven graduating dancers lined up in front of their families’ vehicles Saturday to be recognized for their years of hard work on the dance floor. Many of them have been dancing at Let’s Dance for 15 years, Angela said, and each one is headed to college in the fall so won’t be returning to the studio.

Seniors usually are recognized each year during a recital.

“They never even got to put a costume on this year,” Angela chimed in, adding that the girls have been rehearsing since September to perform with the studio’s competition team.

The team has 85 routines in its repertoire, including one called “J.Lo” that features more than 100 dancers.

“And they never got to dance once,” Angela continued.

The studio has adapted to the current situation by teaching many of their classes online using the video conferencing service Zoom.

“We have learned more technology than we ever thought we would need to know in our lifetime,” Angela said with a laugh.

They estimate that nearly one-third of their 450 students have continued classes from home, learning the steps for new routines in the hopes that they may perform them during a future recital.

The studio typically holds an annual recital in June at the Providence Performing Arts Center. Though that can’t happen this year, the Coburns are hopeful that they’ll be able arrange an outdoor recital at the end of the summer.

“I just can’t wait to hug these kids,” Angela said, “and to see them get up on the stage and dance.”