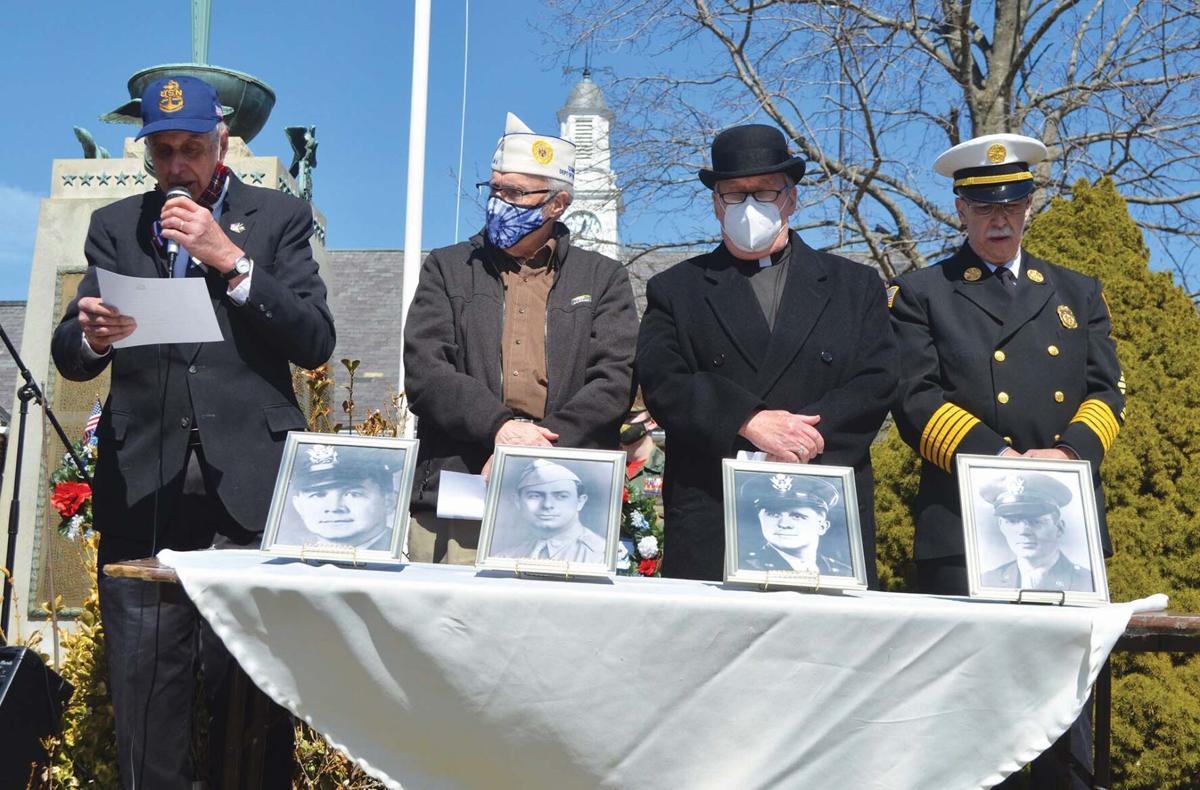 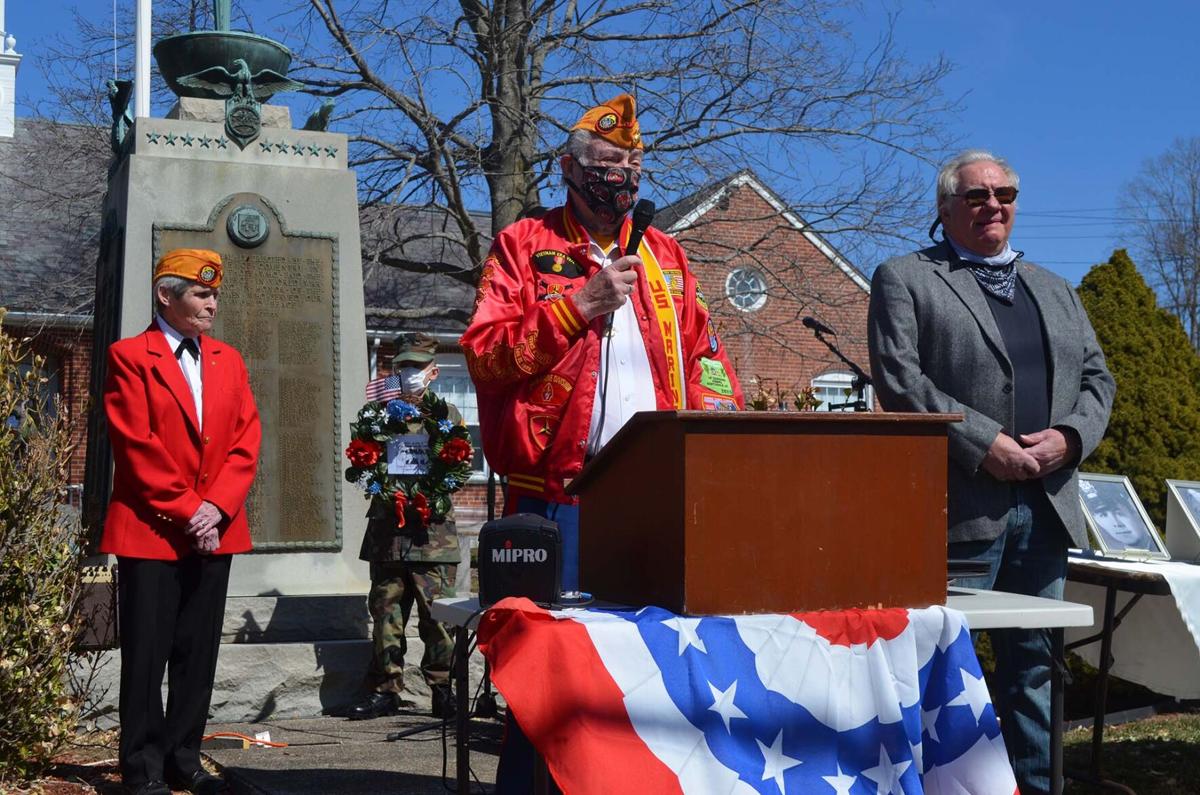 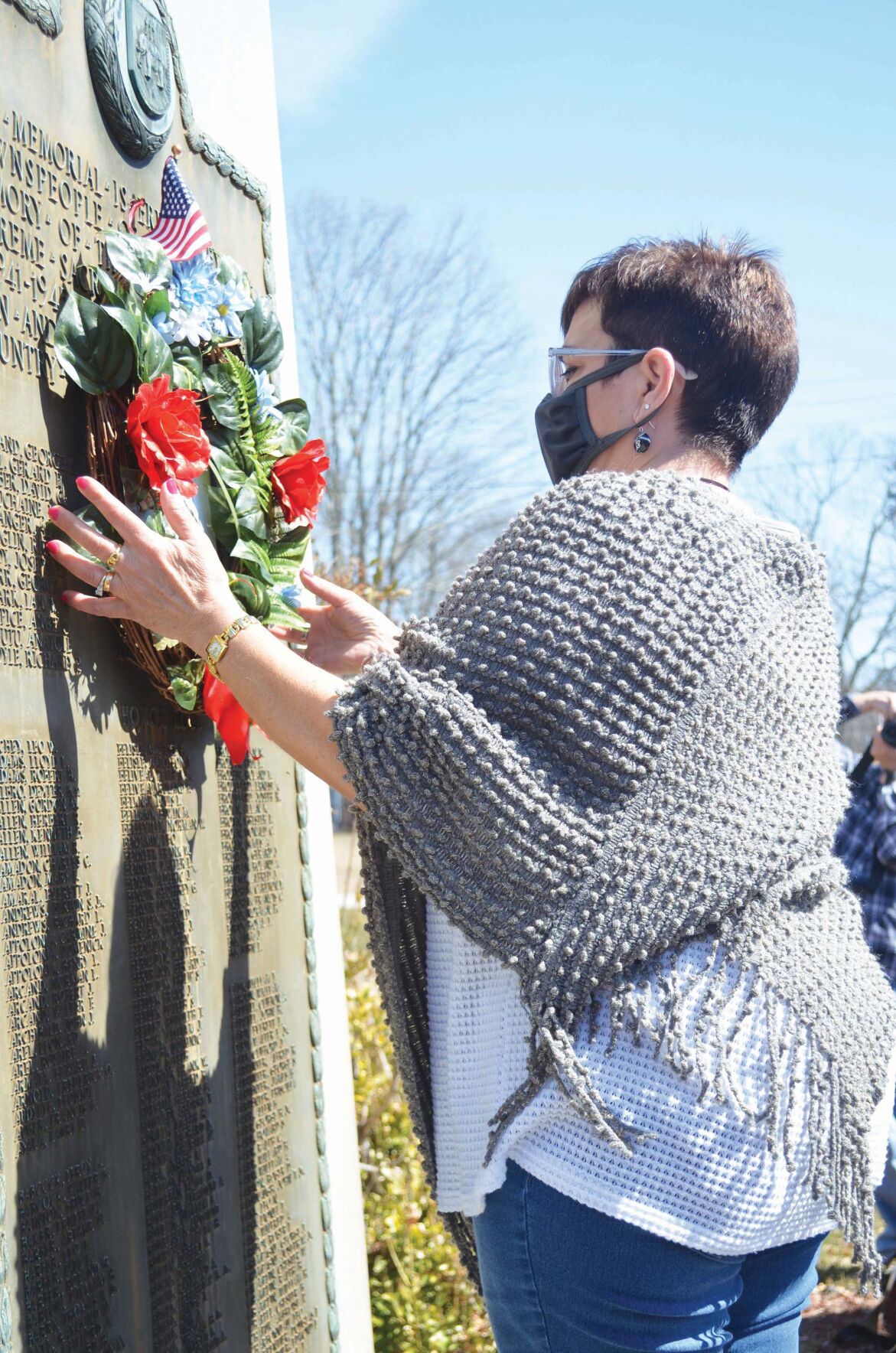 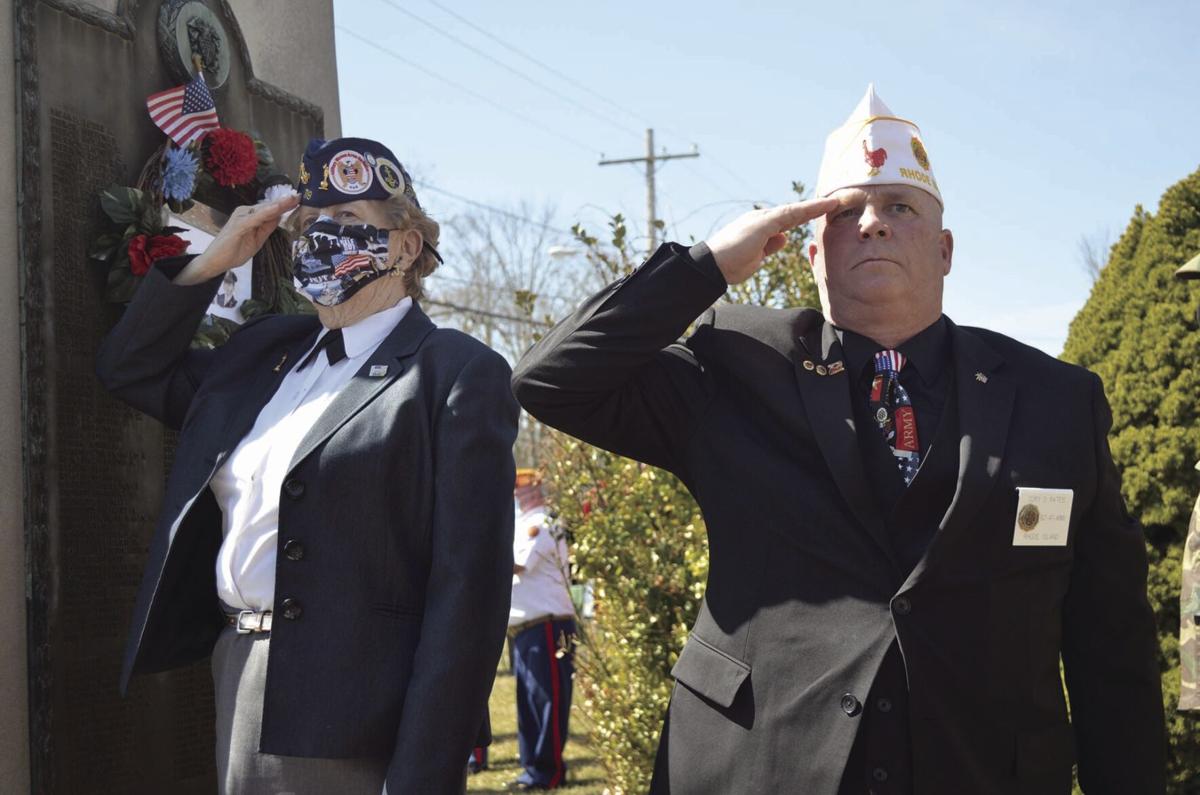 COVENTRY — Every year, a service held in Coventry pays homage to the heroism of four World War II chaplains who, 78 years ago last month, died rescuing servicemen and civilian workers as their ship sank in the frigid Atlantic.

Typically held at the Cornerstone of Faith United Methodist Church, the annual service this year took place next door. Beneath a bright sky, community members spread out Sunday across the lawn and sidewalk that faces Coventry's WWII monument, each one there to remember the Four Chaplains' selfless act of valor.

The event, said VFW Post 9404 Commander Peter Wisnieski, is held to honor “four men of the cloth who sacrificed their lives to save others.”

In the early hours of Feb. 3, 1943, the U.S.A.T. Dorchester was on its way to an American base in Greenland when it was hit by a torpedo from a German U-Boat. The military transport ship sank in some 20 minutes, and of the 902 passengers on board, only 230 survived.

“There was panic on deck,” Lawrence Herrmann, a member of the Board of Directors of the Four Chaplain Memorial Foundation, said as the ceremony got underway.

Amid the pandemonium that accompanied the captain’s call to abandon ship, four chaplains “brought hope in despair, and light in darkness,” Jane Deptula, a chaplain in the Marine Corps League, said Sunday, standing before a crowd that included veterans and their families, Gold Star parents, Sen. Leonidas Raptakis and Kasim Yarn, director of the state Office of Veterans Services.

The chaplains remained calm, guiding wounded men  to safety and distributing life jackets to those who hadn't been killed in the explosion.

And when they ran out of life jackets, the chaplains gave up their own.

Witnesses have recounted hearing the chaplains offering prayers and encouragement. One survivor, Petty Officer John Mahoney, later recalled that despite the bitter cold, Goode gave up his only pair of gloves; Pvt. William Bednar, another survivor, said that the chaplains’ voices “were the only thing that kept me going.”

The chaplains were last seen, Herrmann said, “arm-in-arm, kneeling on a slanting bow as it went under, singing their respective songs and psalms.”

The selflessness of those chaplains, who in 1944 were each posthumously awarded the Distinguished Service Cross and a Purple Heart, offers “one of the clearest modern displays of greater love,” Deptula said.

“The altruistic action of the Four Chaplains constitutes one of the purest spiritual and ethical acts a person can make,” she continued.

Sunday’s service featured a rifle salute and posting of the colors, by the Rhode Island Marine Corps League Color Guard, and of the service colors, by American Legion SPRM Post 81. Dave Donovan sang a hymn; Jim Gadoury performed “I’m Proud to be an American.”

A brief biography of each chaplain was read aloud, and candles were placed before their framed photos. As each bio was read, American Legion SPRM Post 81 Commander Corey Bates rang a bell.

Four wreaths were placed on the WWII monument, one for each chaplain.

Services like the one held in Coventry Sunday are important, Raptakis said as he prepared to present a citation from the state Senate, so that the sacrifices made by people like the Dorchester Chaplains are never forgotten.

“I think the message of the Four Chaplains is very important, because it’s [of] courage, heroism,” Raptakis said, “and that message has to be carried on.”