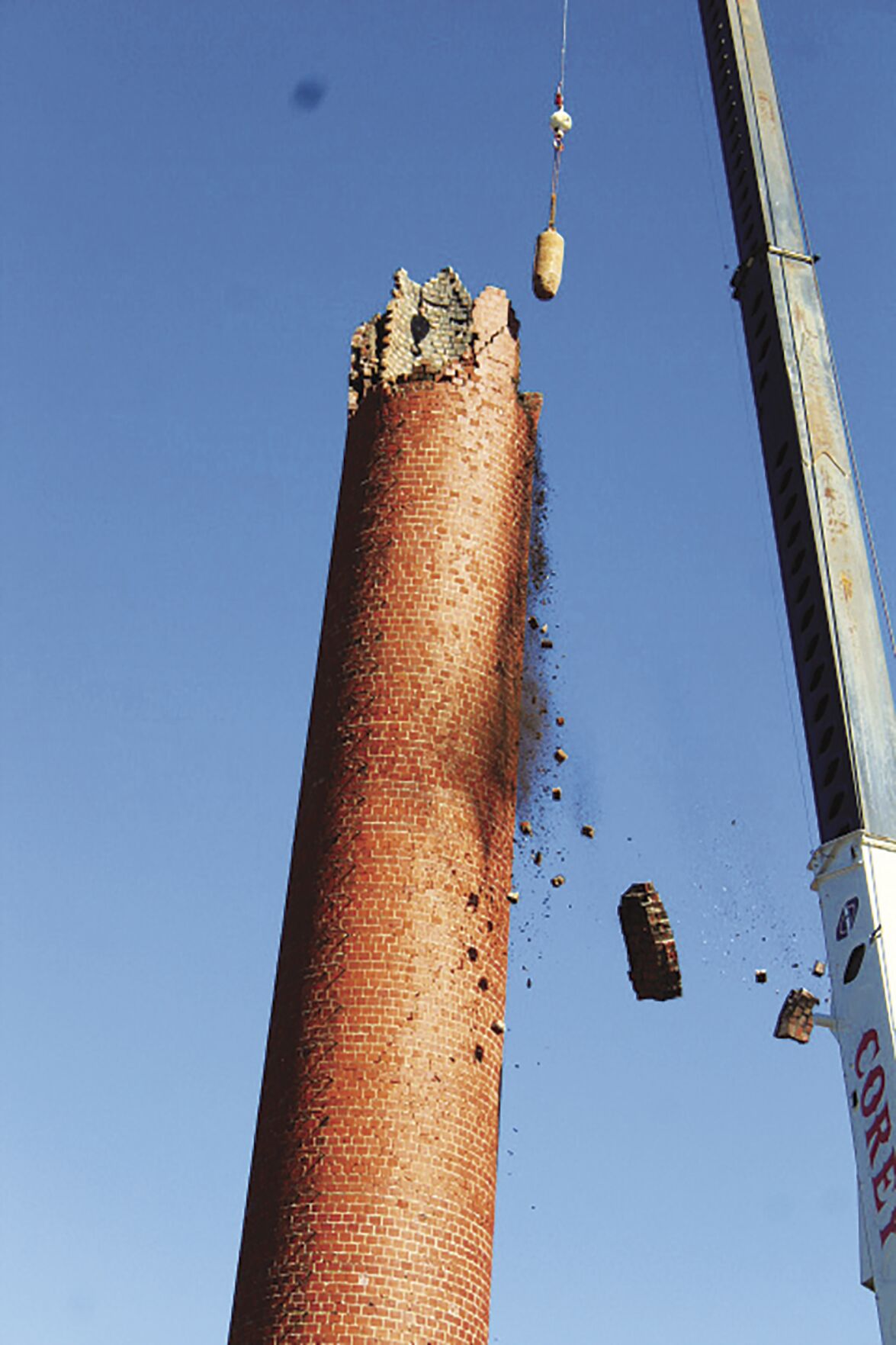 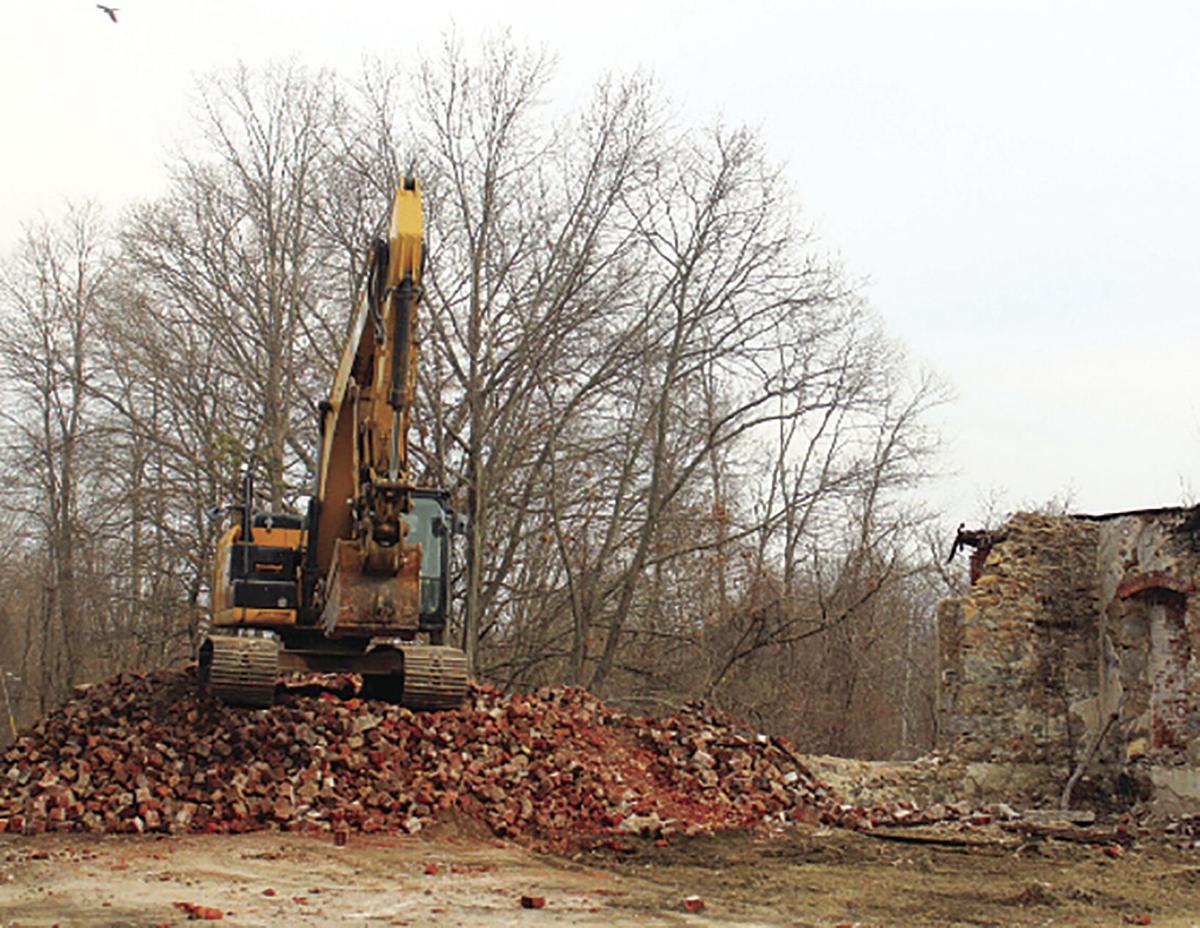 All that remained of the smokestack on Pulaski Street in West Warwick on Thursday, a day after AA Wrecking took a wrecking ball to it, was a pile of old bricks. A remnant of the Crompton Mill, the approximately 120-foot-tall chimney was demolished amid safety concerns due to its poor condition and proximity to the street and other structures. 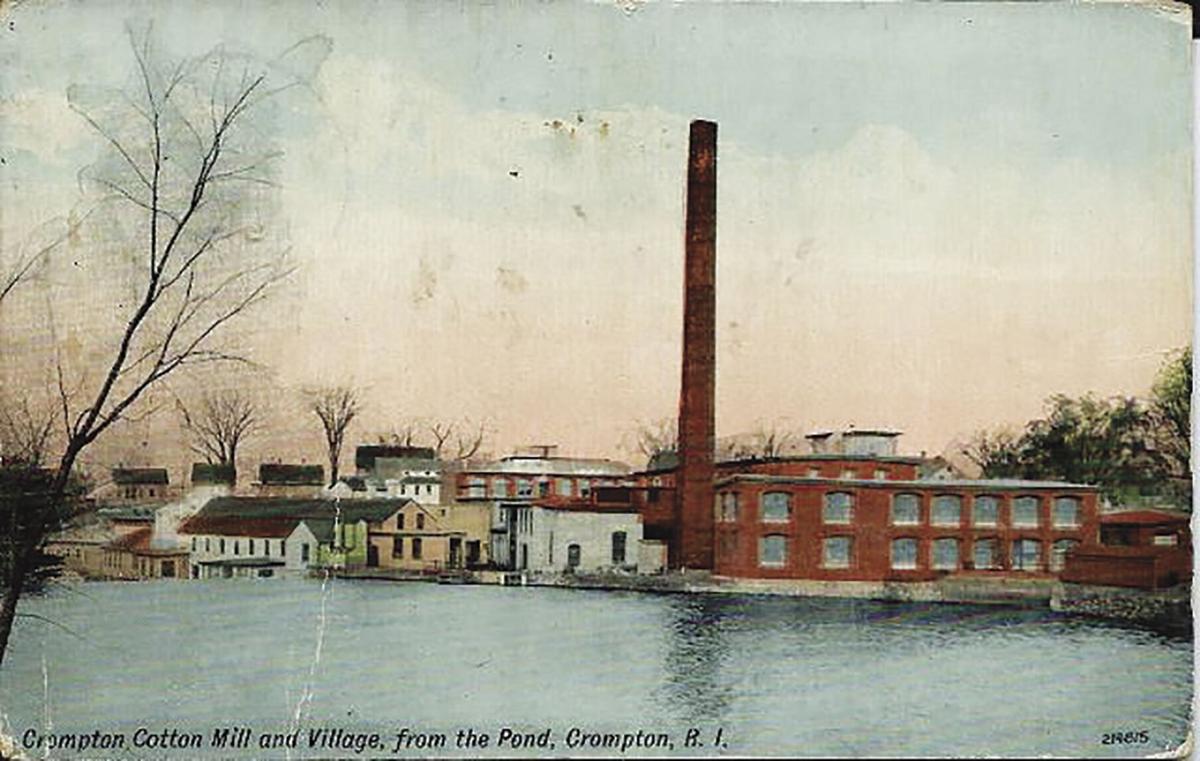 The Crompton Mill smokestack, nearly all that was remaining of the old textile mill off of Pulaski Street after a fire in 1992 devastated it, pictured in an old postcard, was demolished this week amid safety concerns.

All that remained of the smokestack on Pulaski Street in West Warwick on Thursday, a day after AA Wrecking took a wrecking ball to it, was a pile of old bricks. A remnant of the Crompton Mill, the approximately 120-foot-tall chimney was demolished amid safety concerns due to its poor condition and proximity to the street and other structures.

The Crompton Mill smokestack, nearly all that was remaining of the old textile mill off of Pulaski Street after a fire in 1992 devastated it, pictured in an old postcard, was demolished this week amid safety concerns.

WEST WARWICK — On a sliver of land bordered by Pulaski Street and the Pawtuxet River, a longtime symbol of Crompton’s roots as a mill village no longer stands.

“It’s bittersweet,” Jason Licciardi, councilor of West Warwick’s Ward 4, where the old Crompton Mill smokestack was located, said of watching as the piece of the past was knocked down Wednesday. “This is history that we’re living right now.”

The West Warwick Town Council began to discuss razing the approximately 120-foot-tall smokestack last year amid concerns over the structure’s safety. Surrounded by occupied buildings — Lil Rhody Storage sits only some 30 feet from it — and situated beside a somewhat heavily-trafficked road, Public Works Director Don Ouellette warned during a recent council meeting that the tower, which had cracked bricks and was leaning, could fall at any time. An engineer had also deemed the chimney structurally unsafe.

Discussion was had over whether the structure should be repaired or taken down altogether. It was ultimately decided that it would make the most sense to demolish the smokestack, located on a narrow piece of town-owned land.

Bricks tumbled to the ground Wednesday morning, as a 2,000-pound steel wrecking ball slowly worked its way down the chimney, one of the only pieces of the old textile mill that remained after a fire tore through it nearly 30 years ago. Curious residents watched from afar, hoping to catch a glimpse of the falling relic from the Crompton Fishing Pier or the top of Church Street.

Established in 1807 as the Providence Manufacturing Company, what later became the Crompton Company was built on 20 acres of land that was purchased for $1,050, which included water privilege.

Referred to locally as the “stone jug,” the original stone mill was producing cotton by 1808. The company, one of the oldest textile manufacturers in Rhode Island and possibly the first stone mill in the state, grew over the years to include numerous additional buildings on both sides of the Pawtuxet River.

George Martin Richmond gained controlling interest in the Crompton Company in 1866; in 1882, a five-story addition was built and the company became the first in the country to manufacture velveteen and corduroy. The complex soon became known as the “Velvet Mills.”

At its peak, shortly before World War I, the mill complex employed 775 people.

The 1992 fire destroyed much of the old mill on Pulaski Street, but at that point the building had already begun to deteriorate, with only a few tenants remaining on the ground floor; after a textile workers’ strike, the company in the 1920s had started to move its operations south, and activity at the mills dwindled over the decades that followed.

According to a timeline on the West Warwick Firefighters website, within 10 minutes of the department’s arrival at the scene on the morning of May 15, 1992, the entire structure was engulfed in flames. More than 100 firefighters from the area fought the blaze.

Over two centuries after its founding, and almost 30 years after that fateful fire, its weathered smokestack and a small, dilapidated brick building were all that was left of the historic mill.

The West Warwick Town Council voted in January to award a contract for the stack’s removal to A.A. Wrecking Company, whose bid of $55,950 was the lowest of three proposals.

The project is being paid for through funds owed to the town by the Federal Emergency Management Agency (FEMA) following the 2010 floods. The money arrived just as conversations were starting over the smokestack’s future, Licciardi said.

The stack may be gone from West Warwick’s skyline, but bits of it will remain in the valley for generations — several of the structure’s bricks will be added to the Pawtuxet Valley Preservation & Historical Society’s collection, Licciardi said, adding that he thought it important to preserve at least a part of the old structure.

But with safety of utmost concern, Licciardi added, he’s happy to see the smokestack finally taken down.

“It’s taken a long time to get this done, but it was worth the wait,”  he said. “I think this is going to be better, safer, for the area. And that’s the goal.”