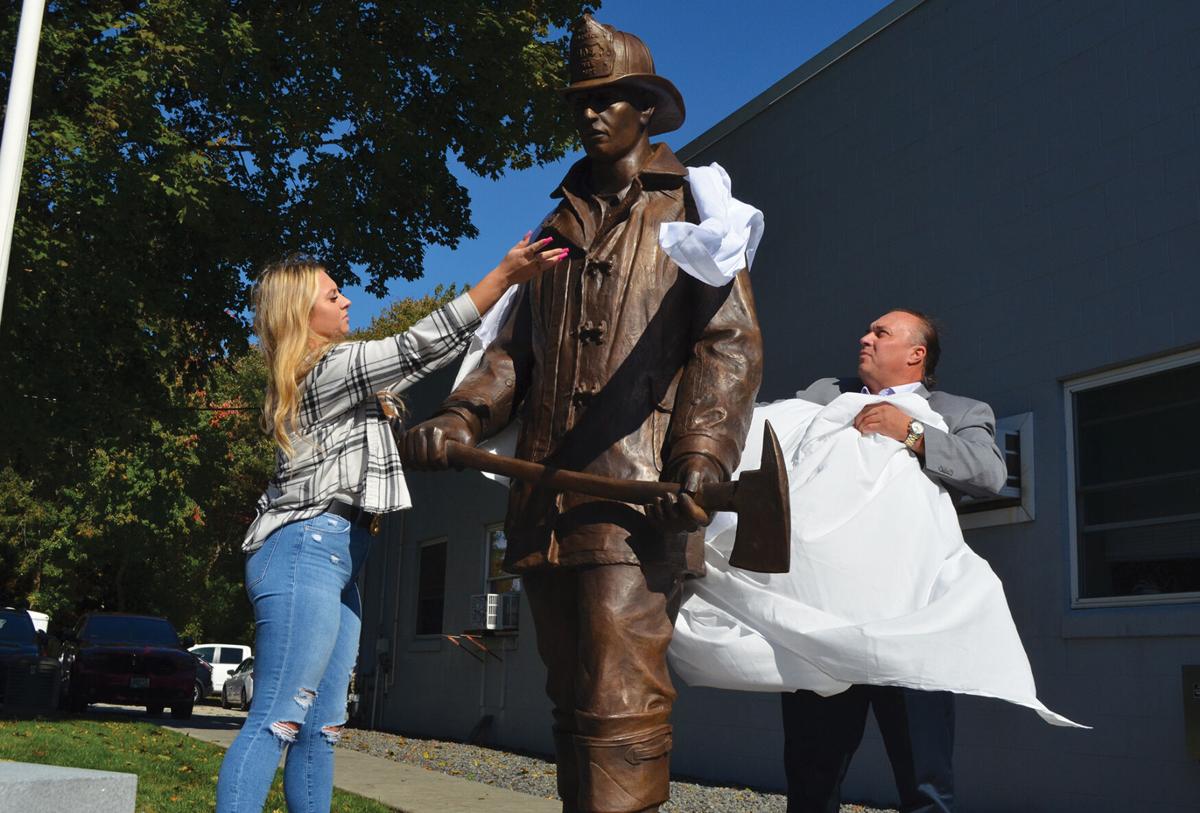 Retired Lt. David Studley, who donated it, unveils a new statue in the park outside of West Warwick Fire Department Station 4 with the help of his daughter Carissa Studley. 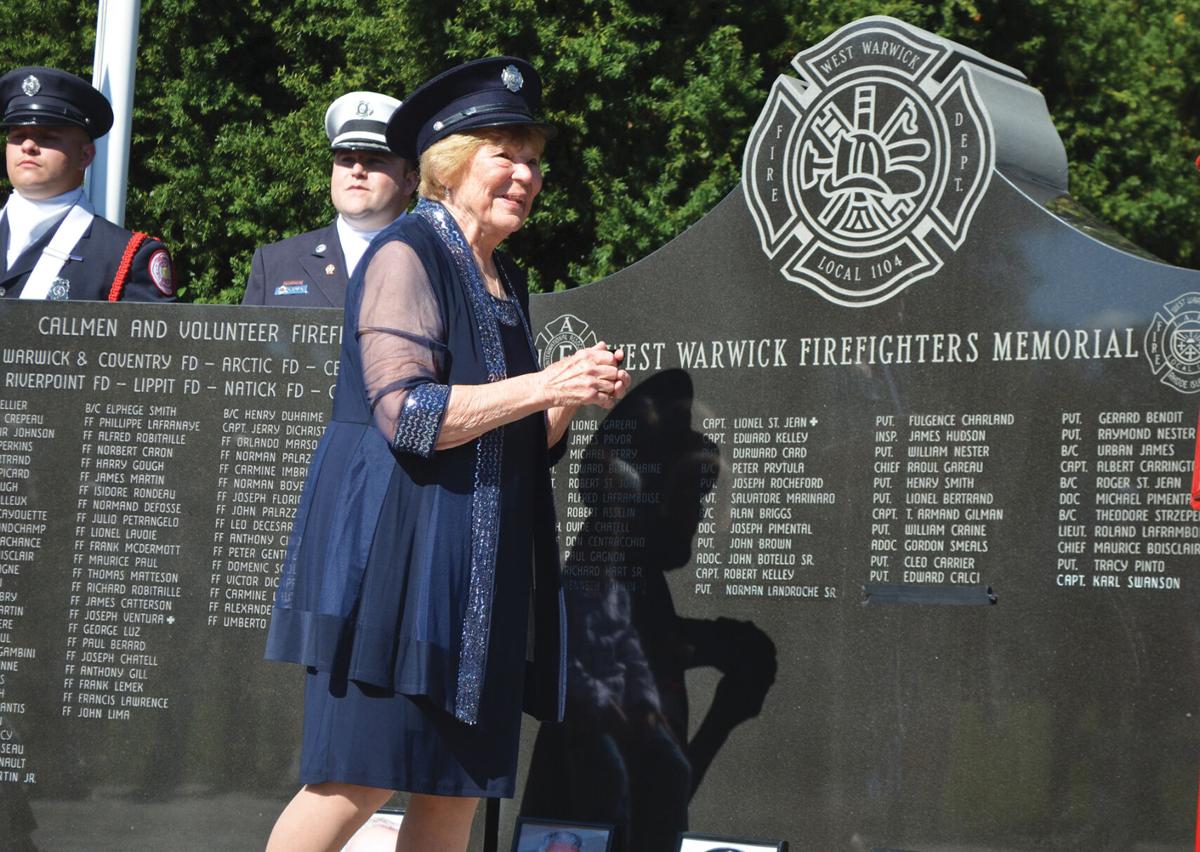 Yvette Landroche uncovers the name of her husband Norman Landroche Sr., who died in March. 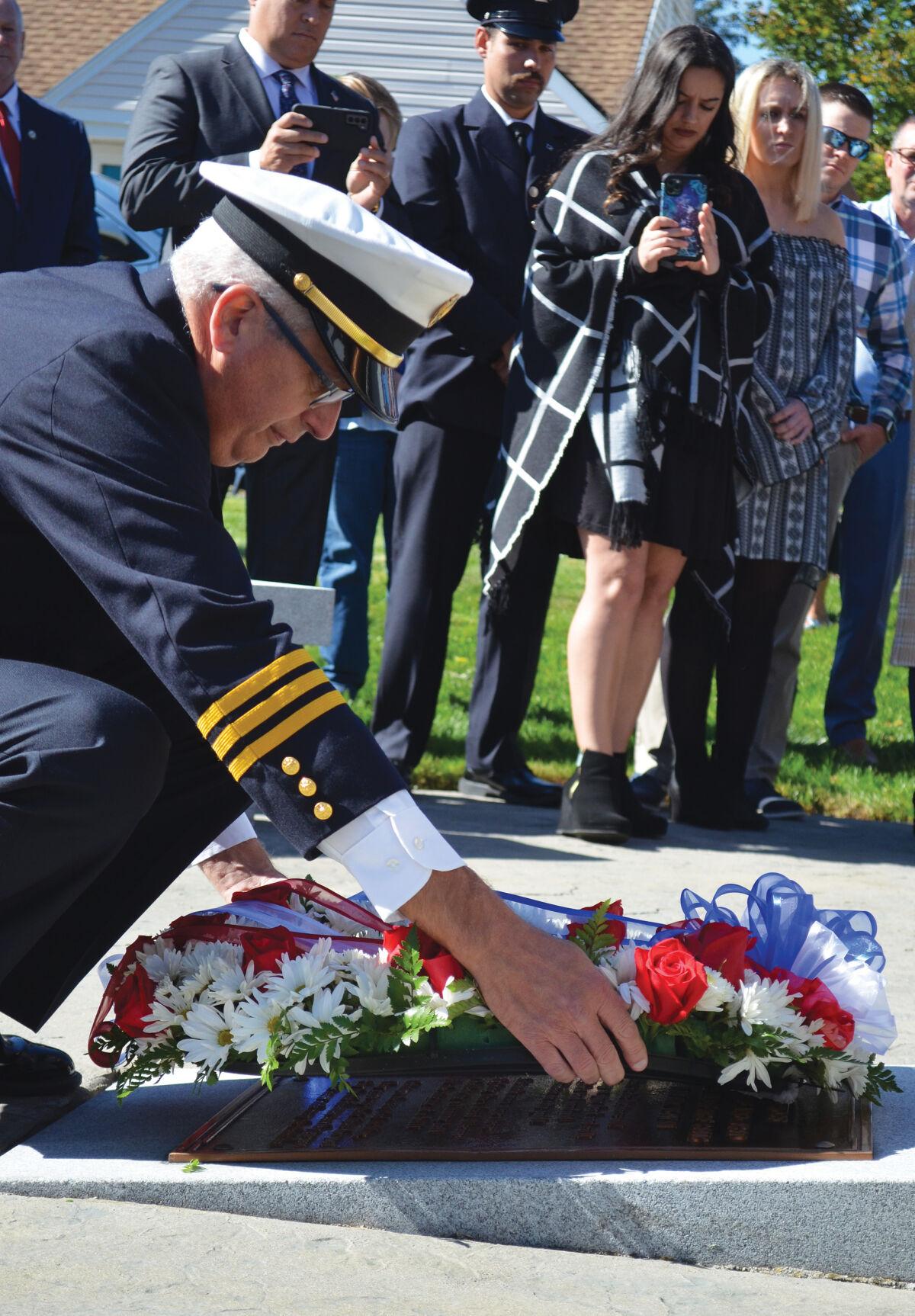 Battalion Chief Paul Boisclair lays a wreath in memory of the late firefighters. 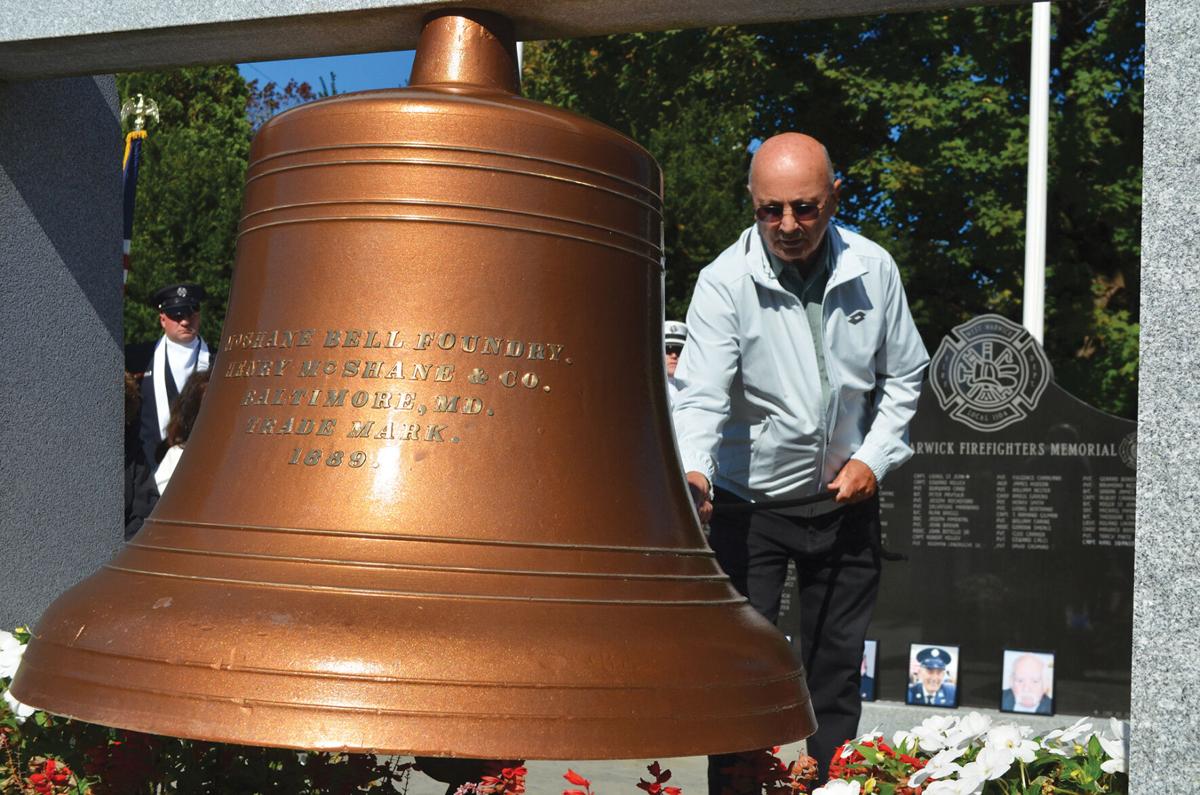 A bell is rung in honor of the local firefighters who have recently died. 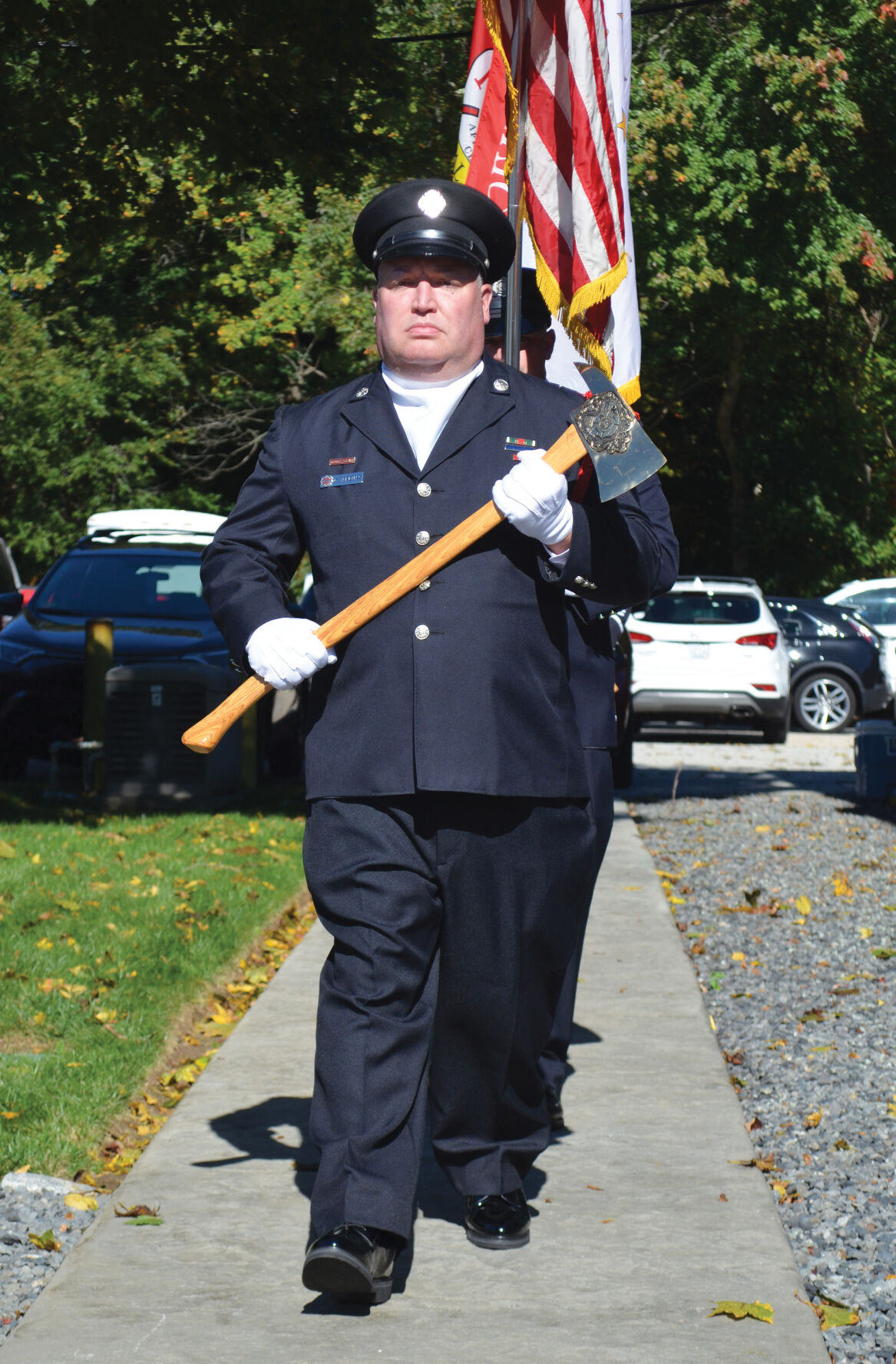 Retired Lt. David Studley, who donated it, unveils a new statue in the park outside of West Warwick Fire Department Station 4 with the help of his daughter Carissa Studley.

Yvette Landroche uncovers the name of her husband Norman Landroche Sr., who died in March.

Battalion Chief Paul Boisclair lays a wreath in memory of the late firefighters.

A bell is rung in honor of the local firefighters who have recently died.

WEST WARWICK — A new statue stands tall in the memorial park outside Station 4. The bronze structure depicts a firefighter; he carries a pick-head axe and atop his head rests a West Warwick helmet, "1104" written in the center.

Nearby, a memorial listing local firefighters who have died since the West Warwick Fire Department was made permanent in 1948 bears four new names.

The statue and names were unveiled recently during the Firefighters Memorial Sunday ceremony, an event held annually to honor those West Warwick Fire Department members, both union and volunteer, who passed away over the preceding year.

“It’s a tough day, remembering loved ones,” said Lt. Jim Rita, president of IAFF Local 1104, “but it’s also a good thing that we do remember them in honor of what they did for this town.”

The statue was donated by Lt. David Studley, who retired in March after 32 years with the department.

“I was always a big supporter of this memorial,” Studley said. “It means a lot to all of us, and I just thought it was the right thing to do. These were limited statues, and I wanted to make sure we got one.”

When Rita and Jerry Tellier, a retired battalion chief, began planning for the construction of a memorial park years ago, the two had hoped to get a firefighter statue.

“The cost of the statue at the time was out of our budget with everything else that we wanted to incorporate,” Rita said, a white sheet billowing beside him, the new statue hiding beneath. “But we always had the vision to hopefully someday purchase [it].”

After realizing last year that there was still one available, Tellier struck a deal to bring it to West Warwick, Rita said. He shared the plan with Studley, who then offered to cover the cost.

“On behalf of the union, and the Memorial Committee, I cannot thank you enough for what you have done and continue to do for this memorial park,” Rita told Studley.

The Cowesett Avenue park was filled earlier this month with local firefighters and those whose loved ones were being honored. West Warwick Town Council Vice President Maribeth Williamson, Sen. John Burke and Rep. Tom Noret were among those gathered.

The ceremony began with a presentation of the colors by the Local 1104 Honor Guard; Battalion Chief Paul Boisclair placed a wreath, Rita said, “in honor of all our brothers that have gone before us.”

Before the statue was revealed, the names of four recently deceased local firefighters were unveiled on the Firefighters Memorial.

“He was the best firefighter,” Yvette Landroche said of her late husband following the ceremony.

“He lived long enough to see a third generation of firefighters,” she said, adding that having her husband’s name included on the memorial “means the world to [her].”

The names and the new firefighter statue weren’t all that were unveiled during the ceremony.

A granite bench was dedicated to Rita and his dad, Antonio Rita, as a symbol of appreciation for the pair’s tireless efforts to maintain the memorial park. The recognition was a surprise to them both.

“This is a long time coming,” Tellier said, as father and son prepared to lift a sheet from the bench etched with their names. “It’s time that they be recognized.”

Rita and his dad, an honorary member of the union, have been maintaining the park since it was dedicated around nine years ago. The bench dedication, Rita said later, was “totally unexpected.”

A beautiful statue along with such a moving remembrance with our thank you and appreciation ~ GOD Bless!