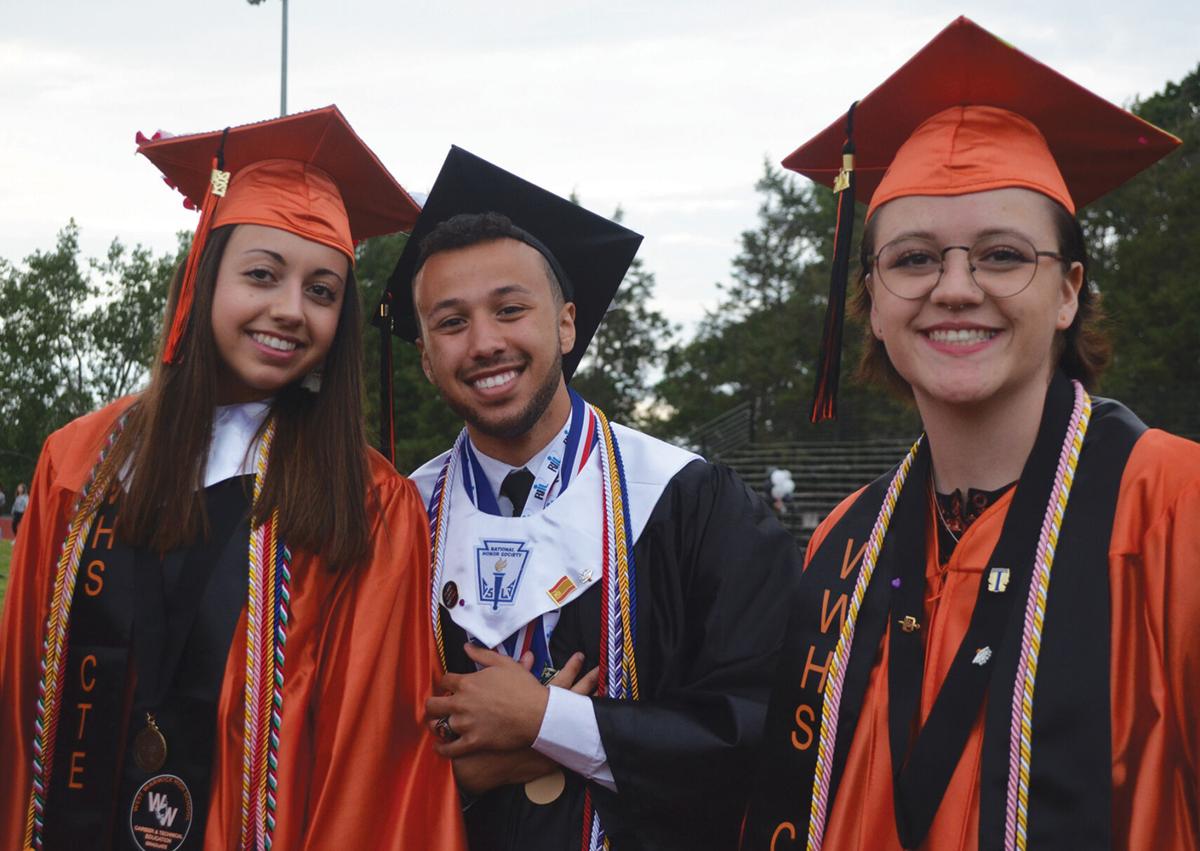 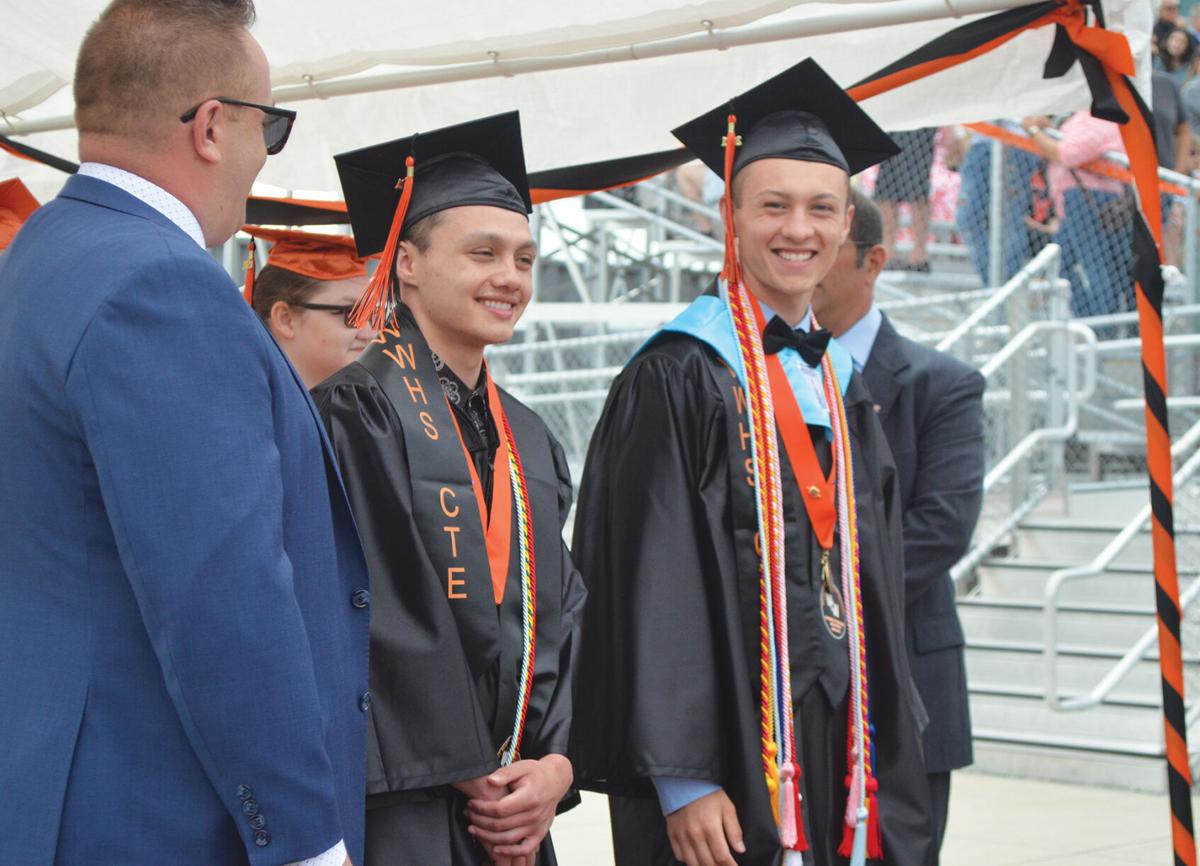 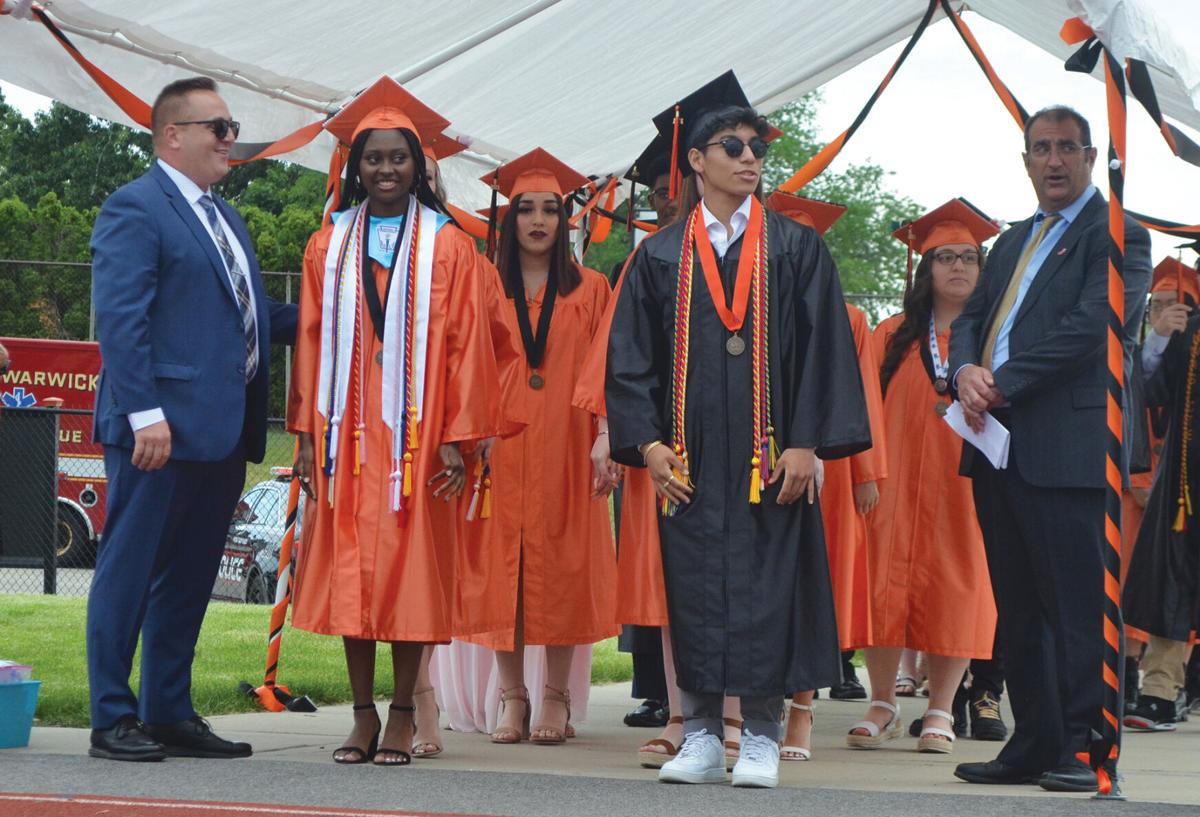 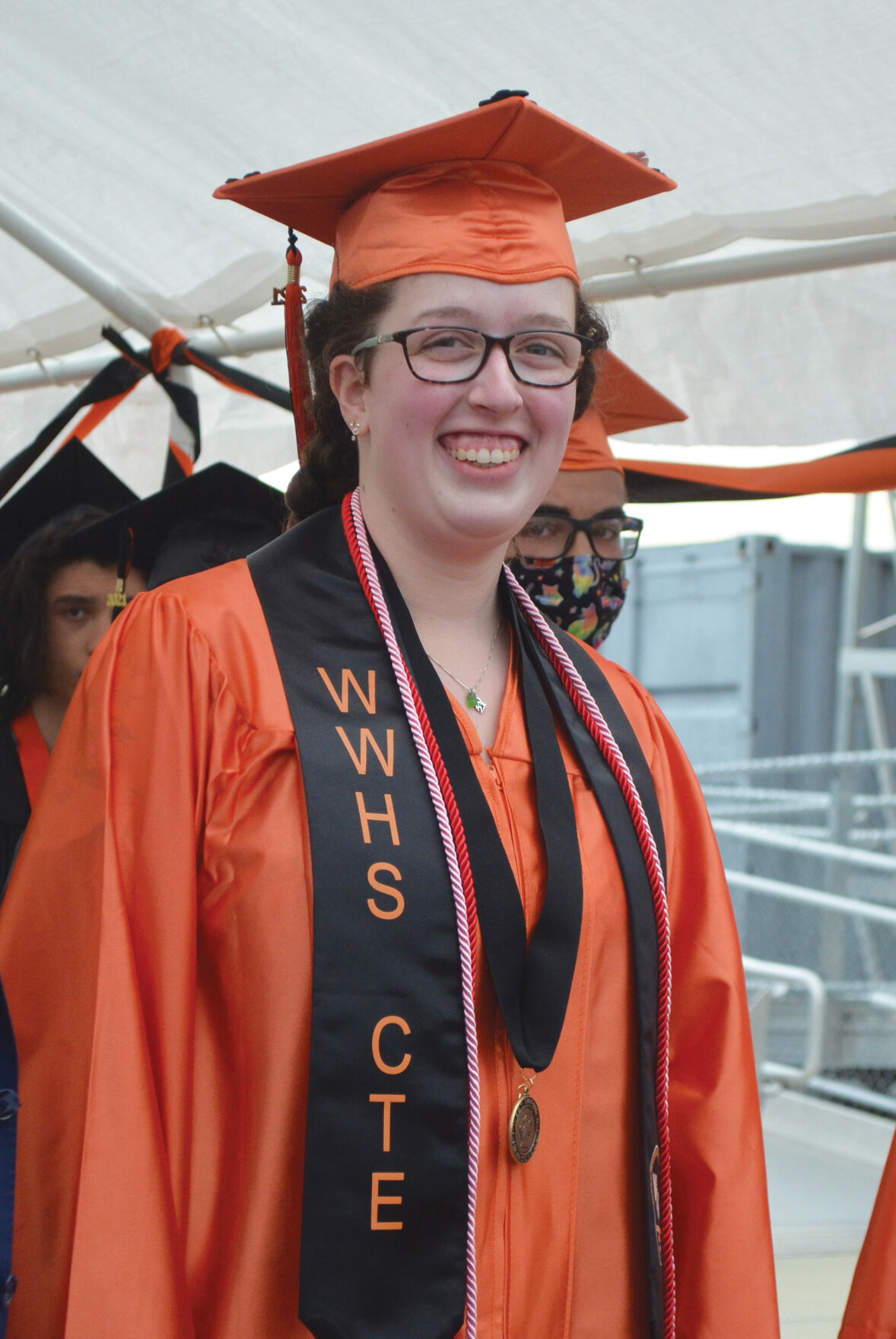 WEST WARWICK — The football field was awash in Wizard pride Friday night, as West Warwick High School said farewell to 217 members of the class of 2021 during a commencement ceremony unlike any other.

“Tonight we are here to celebrate the class of 2021; a class that has had to overcome many obstacles since March of 2020,” said Jacob DiMeglio, president of the class, looking onto a field filled with row after row of his fellow graduates, their families and their friends.

This year’s commencement ceremony looked different from those of the past, held outdoors beneath a sky that threatened rain. In previous years, it’s been held at the Veterans Memorial Auditorium in Providence; last year, a pre-recorded ceremony took place virtually amid tight pandemic restrictions.

Orange and black streamers and balloons flanked the field entrance Friday, as graduates processed through in caps and gowns to match. A stage lined with potted flowers stood before one of the goalposts; “class of 2021” was spray painted in bubble letters alongside the track.

As he addressed his peers from the podium, DiMeglio recounted their shared memories, and commended their determination to make the most of what has been a tough 15 months.

“We experienced, not only a different, but a difficult senior year,” he said. “For most of us, it was hard to get out of bed every morning, reach over to our end tables, grab our Chromebooks that were most likely not charged, and attend Google meets that drained whatever battery life we had left.”

The graduates, who he noted only really had two and a half years to bond, “are ready to move forward.”

“I’m happy to be standing here tonight, in person, to tell you all that we are officially almost there,” he continued. “All that’s left to do is cross the stage.”

The ceremony opened with introductions by Masters of Ceremony Grant Black, senior class secretary, and Olivia Fitts, student council president. Class treasurer Gianna Teh led the salute to the flag, followed by a stirring rendition of the Star-Spangled Banner by graduating members of the concert chorale.

As DiMeglio wrapped up a speech that was at times emotional, Supt. Karen Tarasevich took the podium to deliver her own address to the class of 2021.

In writing her speech, Tarasevich said, she had been determined to avoid talking about the pandemic. She realized, however, that “it would be disingenuous to gloss over such an intense experience we have all shared.”

Still, how to reflect on the pandemic without rehashing the challenges had her stumped, she said.

“I finally realized I was looking too hard. The answer was right in front of me,” Tarasevich said. “The answer is in community… in what carried us through, and how we are better off because of it.”

Tarasevich told the story of Heather Abbott, a survivor of the Boston Marathon bombing who lost her leg in the tragic event. Tarasevich recalled wondering after hearing Abbott’s story how in the wake of such a traumatic experience someone could possibly move forward.

In dealing with what happened to her that day, Tarasevich said, Abbott remained logical, not wasting time by asking why, and instead focusing on moving forward; she drew inspiration from the kindness of the countless people who helped her; and she found opportunities to help others.

“We always have a choice,” Tarasevich said. “There will be times when you have adversity in your life. You can choose to be defeated by it, or conquer it and find strength in what happened.”

And through community support, she continued, adversity can more easily be overcome.

To the side of the stage, the high school Jazz Ensemble “A” Band followed the superintendent’s address with a lively performance of “Beaulah Witch,” under the direction of Matthew Livesey.

The salutatory and valedictory speeches came next, separated by a performance by the concert chorale of “You Learn,” directed by Richard Marchetti.

In an address sprinkled with humor and scientific references, Meghan Janicki, who with a 4.588 grade point average was named the class salutatorian, encouraged her classmates to consider their personal mission statements.

“Get out there and keep doing the one thing that will get you closer to being the person you want to be, and allow it to grow exponentially over time,” Janicki said.

Janicki urged the graduates never to compare themselves to others, for each person is unique, and to never underestimate their potential.

“We are entering the next chapter of our lives,” she said, “where it is possible to be the ones who are creating the solutions.”

In this age, with the internet, automation, artificial intelligence and other technologies, all kinds of possibilities lie ahead for her generation, added Janicki, who pleaded with her fellow grads to “keep moving forward, no matter what happens.”

“We live in the world of impossibilities becoming realities,” she said, “don’t we dare waste it.”

Hannah Shindler, whose 4.5956 grade point average landed her at the top of her class, took the podium next, delivering a speech that touched on the importance of being flexible.

Shindler recalled her determination to attend an Ivy League college, and the disappointment she felt at being rejected from her choice school, Yale University. But now, with plans to attend Case Western Reserve University, Shindler said she’s excited about all that lies ahead.

Just as her own post-graduation plans have changed drastically, so did the senior year that Shindler and her classmates had always imagined. Instead of homecoming, sports events and main stage productions, Shindler said, students got masks, social distancing and online classes.

“And,” she continued, “most significantly, adjusted expectations.”

The community made the best of the unfortunate circumstances: a car parade was organized to celebrate the soon-to-be graduates; an adopt-a-senior program showed the students that they were loved.

“Life is full of twists and turns,” she said. “As much as we can set goals and anticipate outcomes, it is difficult to imagine the factors that stunt our progress, or account for the times when our internal GPS is in a constant loop of rerouting.”

Jessica Hassell, principal of West Warwick High School, delivered the final speech before the graduates crossed the stage, retrieving their diplomas before moving the tassels on their caps from right to left.

“There are houses, and then there are homes,” Hassell began. “Homes make you feel safe, special, loved, encouraged and comforted. I am proud to say that tonight, we are home.”

For many members of the class of 2021, Hassell added, the West Warwick Public Schools for the last 13 years has been home.

In March of 2020, Hassell said, the pandemic changed everything, as “the big, bad wolf” that was COVID-19 tried to blow the house down.

“Collectively, we were stronger than sticks, straw and even bricks,” she said, “because our home is made of passion, knowledge, love and grit.”

Amid the uncertainty that followed, she said, the school community began to rebuild atop the existing foundation of “trust, knowledge and passion for our community,” and “redesigned education as we knew it.”

Hassell lauded the district’s hard-working teachers, and praised members of the class of 2021 for their perseverance, and for creating a home “that chooses love.”

“Today you leave the home you made many years ago, and you walk away with years of wisdom, newfound passions, and the ability to overcome,” Hassell continued, looking out across a sea of orange and black. “As you enter college, careers and the military to begin this new and exciting adventure, class of 2021, you are never too far from home sweet home.”

CONGRATULATIONS! Say, the article says it all .. another dimension in a vastly and rapidly changing world .... challenges galore! Stay close, Stay Safe to your principles and ideals - Good Luck & GOD BLESS!