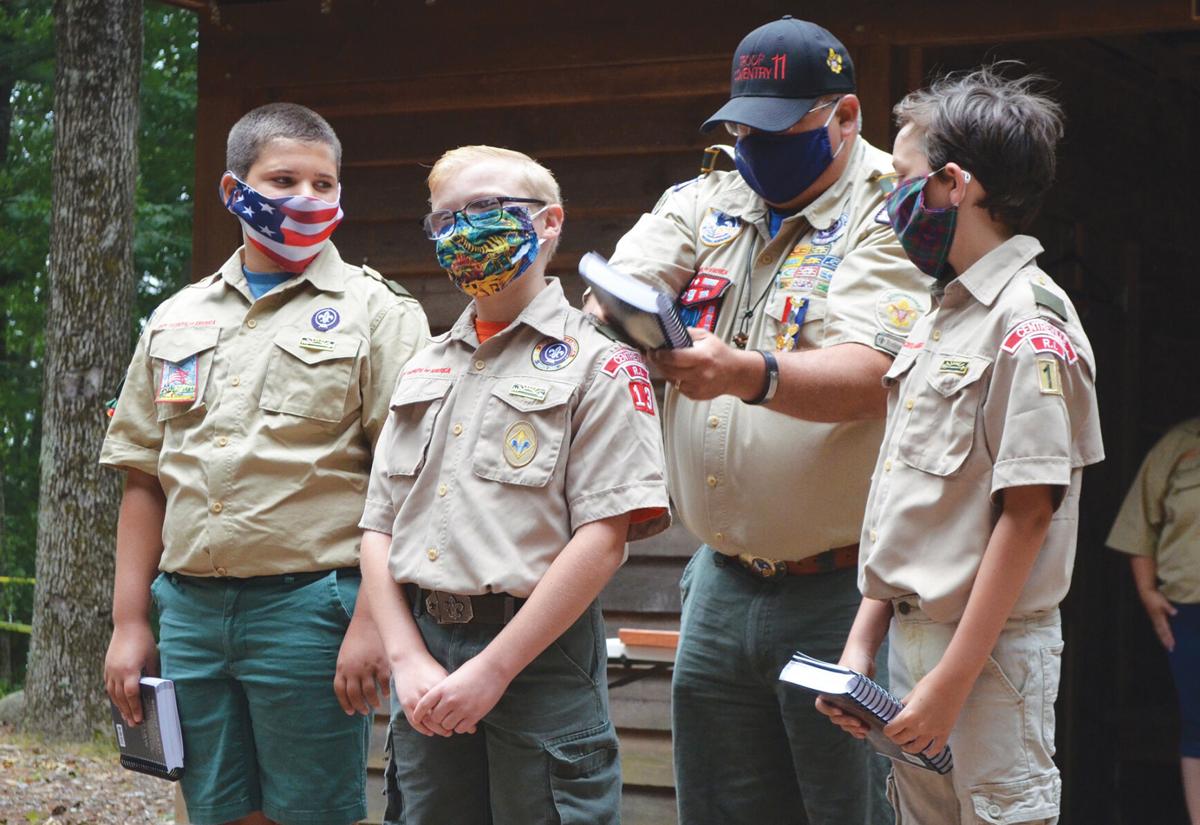 Cub Scout Pack 1913, of West Warwick, held its first ever Arrow of Light and Crossover Ceremony Saturday at Camp Yawgoog. A number of Scouts crossed up, and three, pictured above being dubbed in by Troop 11 Coventry Scoutmaster John Potvin, crossed over to Troop 11. Pictured, left to right: Wyatt Rainey, Anthony Capaldi and Caden LaPointe. 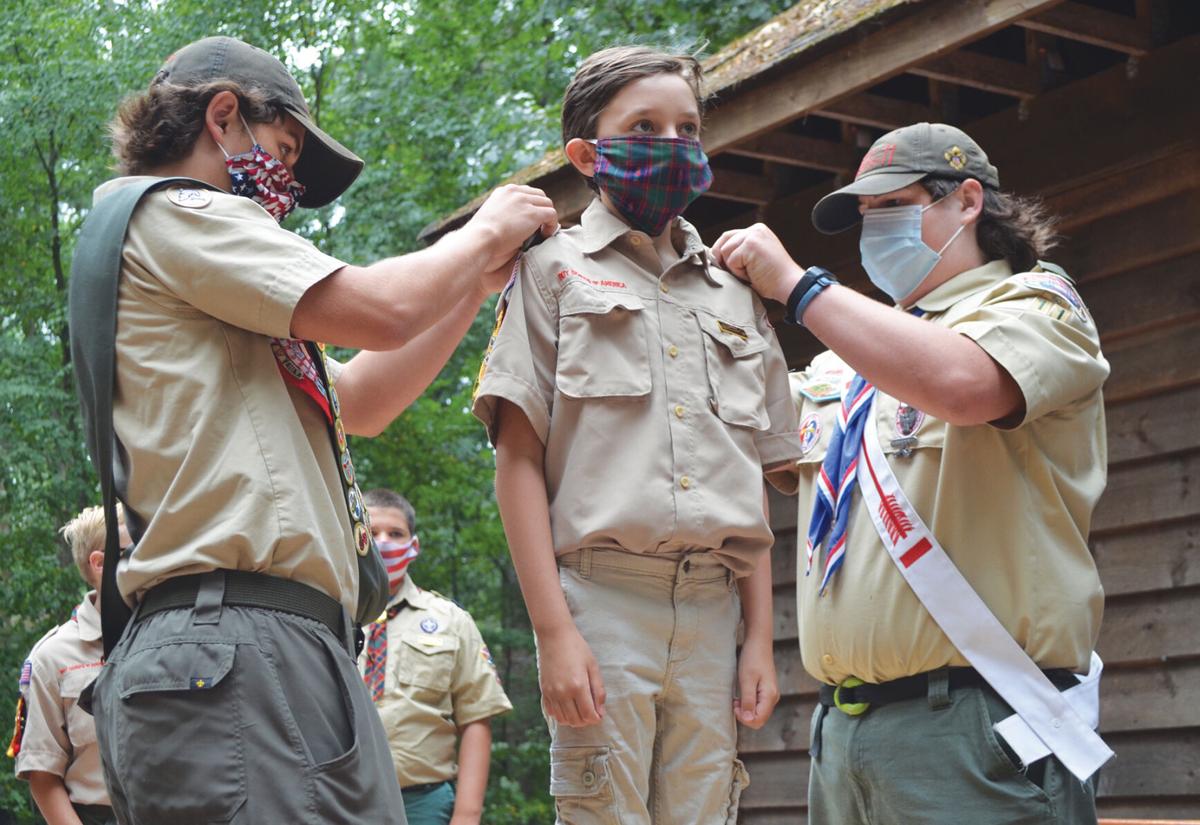 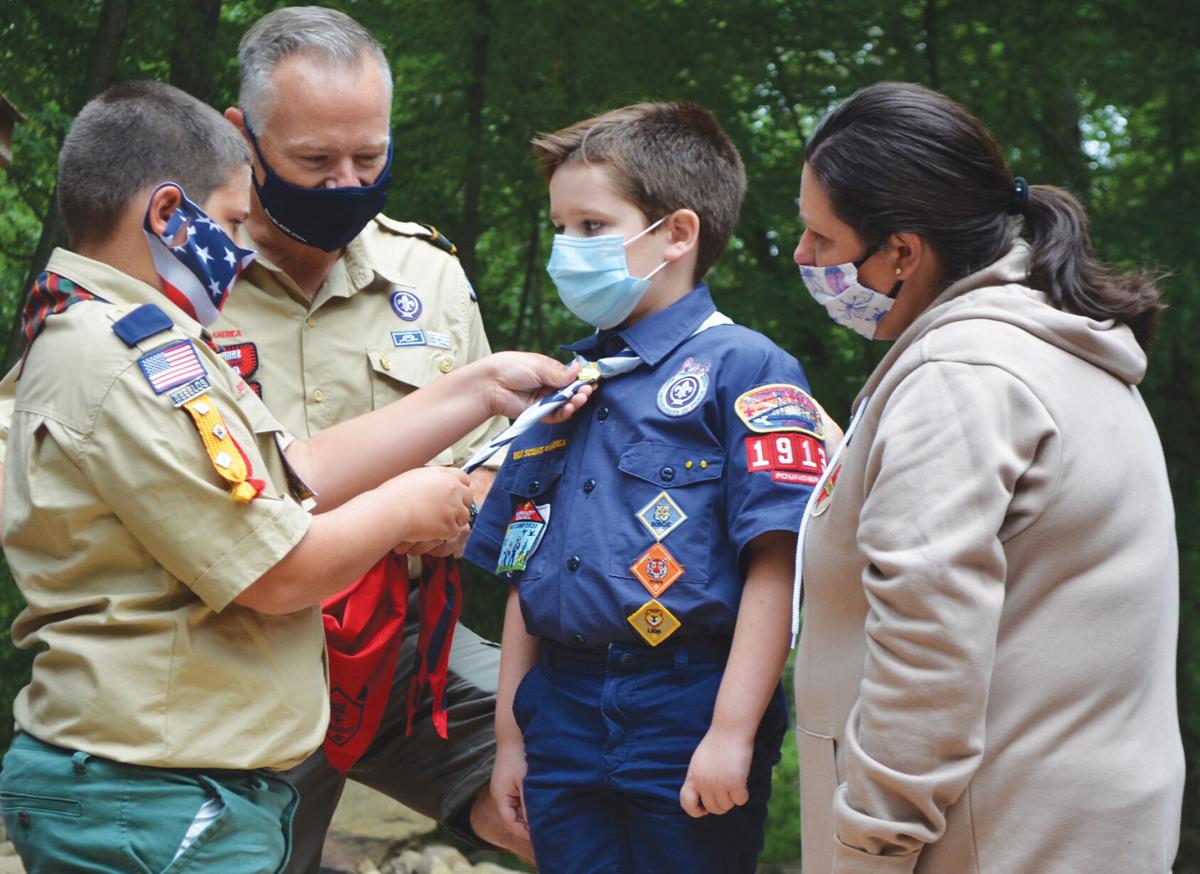 Griffin Black advances to the rank of Bear within Pack 1913. 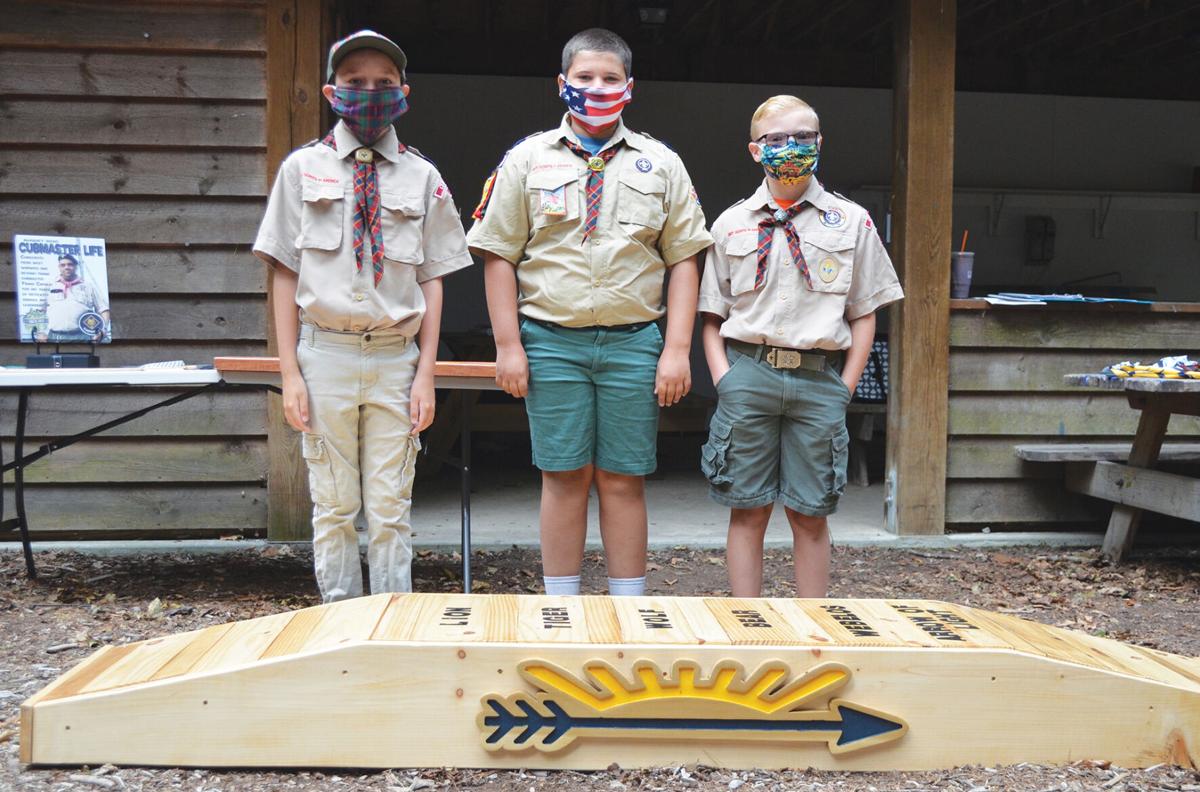 Left to right: Caden LaPointe , Anthony Capaldi and Wyatt Rainey all received their Arrow of Light awards Saturday before being welcomed into Troop 11 Coventry.

Cub Scout Pack 1913, of West Warwick, held its first ever Arrow of Light and Crossover Ceremony Saturday at Camp Yawgoog. A number of Scouts crossed up, and three, pictured above being dubbed in by Troop 11 Coventry Scoutmaster John Potvin, crossed over to Troop 11. Pictured, left to right: Wyatt Rainey, Anthony Capaldi and Caden LaPointe.

Griffin Black advances to the rank of Bear within Pack 1913.

Left to right: Caden LaPointe , Anthony Capaldi and Wyatt Rainey all received their Arrow of Light awards Saturday before being welcomed into Troop 11 Coventry.

Founded in the spring by a group of local families, Pack 1913 should have held its first Crossover and Arrow of Light Ceremony in the spring. Because of coronavirus, however, the event had to be delayed.

“This has been a unique year for us,” Chris Black, committee chair of Pack 1913, said as he led the belated ceremony.

Establishing a new Cub Scout pack as a pandemic took hold certainly posed some challenge. But, despite the difficult circumstances, the unit’s members have striven to adapt.

In addition to holding regular virtual den meetings and taking part in hands-on activities posted to their YouTube channel, members of Pack 1913 have participated over the last few months in several service projects around the Pawtuxet Valley.

“This is like a big family,” Lisa Fratus, the pack’s new cubmaster, said before the ceremony Saturday morning.

And as a family, it was important that the second-year Webelos, each a rising sixth-grader, be given a proper crossover into Troop 11 Coventry.

“They never had a ceremony, so I felt like they kind of got forgotten,” said Fratus, whose twin sons Travis and Logan are first-year Webelos in Pack 1913. “It’s just nice to be able to give this to them.”

In addition to receiving citations from the Town of West Warwick, state Sen. Adam Satchell and the BSA Narragansett Council, Anthony Capaldi, Caden LaPointe and Wyatt Rainey each also were recognized Saturday for achieving the highest rank in Cub Scouts.

The Arrow of Light, Black explained as he prepared to hand Capaldi, LaPointe and Rainey each an “arrow of honor” to mark the milestone, symbolizes their accomplishments as Cub Scout graduates.

“Our second-year Webelos, Arrow of Light Scouts, have brought great honor to this pack as they have climbed the Scouting trail,” Black said. “After earning the Arrow of Light, everyone knows that a Cub Scout is ready to become a Boy Scout.”

The three boys stood beside Black, as their parents attached Arrow of Light patches, one of the only Cub Scout patches that can be worn on a Scouts BSA uniform, to their khaki shirts.

After receiving their awards, John Potvin, scoutmaster of Troop 11 Coventry, led the young Scouts to the other side of a handmade wooden bridge. And as they crossed, Jacob Phillips, the incoming senior patrol leader for Troop 11 and a rising junior at Bishop Hendricken, and Owen Dowling, the troop’s outgoing senior patrol leader and a rising senior at the Greene School, attached new epaulets to each Scout’s shoulder.

And then, as Potvin brought the Scouts BSA handbook down onto each boy’s shoulders, the three officially became part of Troop 11.

The other Cub Scouts of Pack 1913 were recognized Saturday, as well, as they ranked up within the unit.

One at a time, the young Scouts mounted the bridge, atop which had been written all six Cub Scout ranks. Each stood on the portion representing his current rank, while the who had earned their Arrow of Light patches helped replace his sash and neckerchief.

Black gave each Pack 1913 member a founders patch Saturday, as well, before also taking a moment to thank Frank Capaldi for his hand in bringing the vision for the pack to fruition.

“When we brought the idea together, that it was time to create a new unit, although Frank knew his time was certainly limited in Cub Scouts, he was full on board,” Black said of the outgoing cubmaster, who will still have an assistant role in the unit but plans to follow his son this fall into Scouts BSA.

A caricature of Frank Capaldi was stuck to the backside of the bridge — the plan is to make a fun tradition of adding each scoutmaster to the lineup.

Fratus was also recognized during the ceremony. As she enters her new role as cubmaster of Pack 1913, she said she looks forward to creating more service opportunities for the members of her unit. She also plans to focus on fundraising, which she said has been difficult amid the pandemic.

“We’re trying to cover the kids’ costs,” Fratus said. “We don’t want kids not to do Scouting because of the cost — we want them to be able to Scout.”

Another major goal, Fratus added, is for the pack to continue giving back to the town.

Named in part for the year West Warwick was incorporated, Pack 1913 and its members take pride in their hometown. Fratus said that she’d like to collaborate with some of the local nonprofits on projects that will benefit the town’s residents, for example. She added that she plans to work with Wreaths Across America to lay wreaths in local veterans cemeteries, like the one at the Gen. Nathanael Greene Homestead.

“We’re trying to teach the kids that you should be giving back,” she said.

As Scouts and their families mingled before Saturday's ceremony, Potvin said he’s happy to welcome the new Scouts into Troop 11.

“It’s my honor to welcome these Scouts into their next adventure, the next chapter of their Scouting career,” he said.

Phillips added that he looks forward to guiding the new Scouts.

As for the new Scouts, themselves, their excitement Saturday was mixed with some nervousness about being the new guys in the troop.

“I’m kind of nervous,” LaPointe admitted, standing among his fellow Scouts following the ceremony. “I know I’m going to be new to it all.”

“I’m worried,” he said, an Arrow of Light patch attached to his shirt pocket, “but I’m not that worried.”

After all, they’ll always be part of the Pack 1913 family.

“Even though they’re crossing over, they won’t technically be part of our [unit], but they’re not going anywhere,” Fratus said. “We’re a family.”

CONGRATULATIONS to the newest BSA Members of Troop 11 Coventry and the newly-establish Cub Pack 1913 of West Warwick along with their Committee and Leaders in making such wonderful achievements for person, family and community!We look forward to interacting with our long established relationships among numerous Scouting Troops in service at the JAYCEE Arboretum-Corridor & Senator Roch Riverwalk!