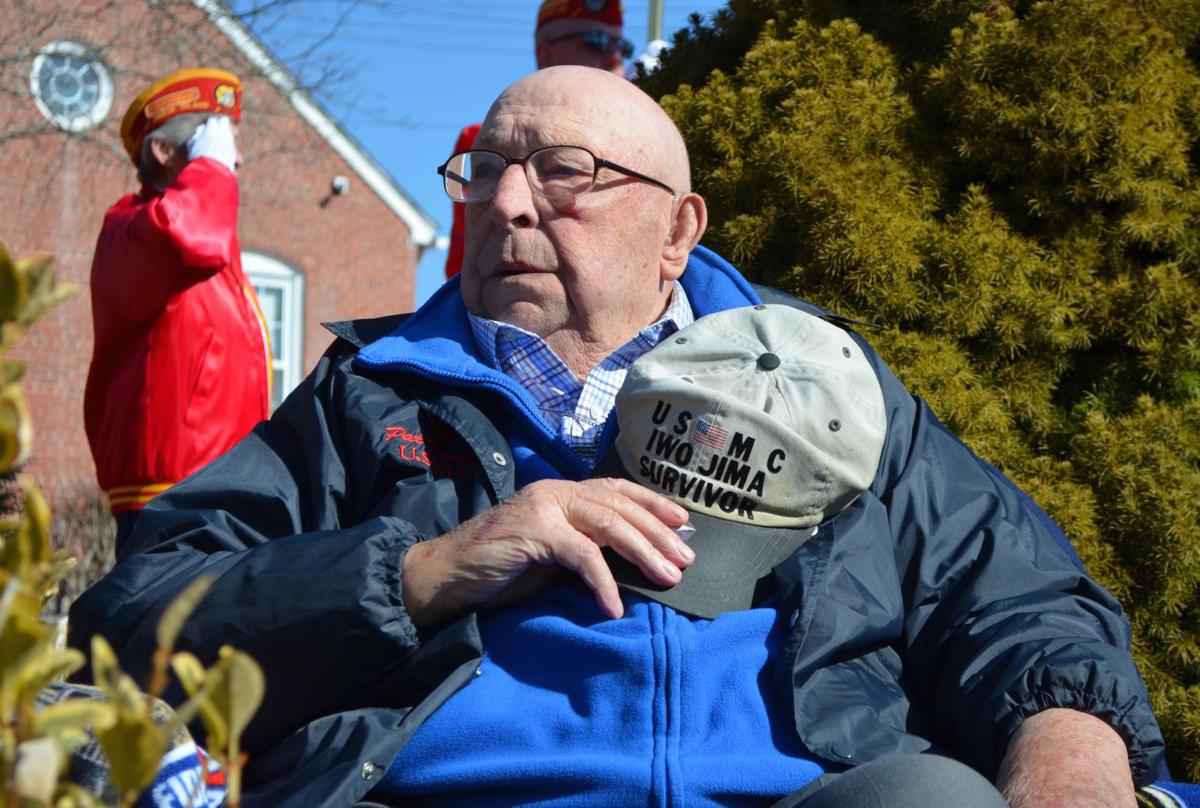 Pat Femino, a resident of North Smithfield and survivor of the Battle of Iwo Jima, was the guest of honor during a ceremony recognizing the raising of the flag over Iwo Jima. 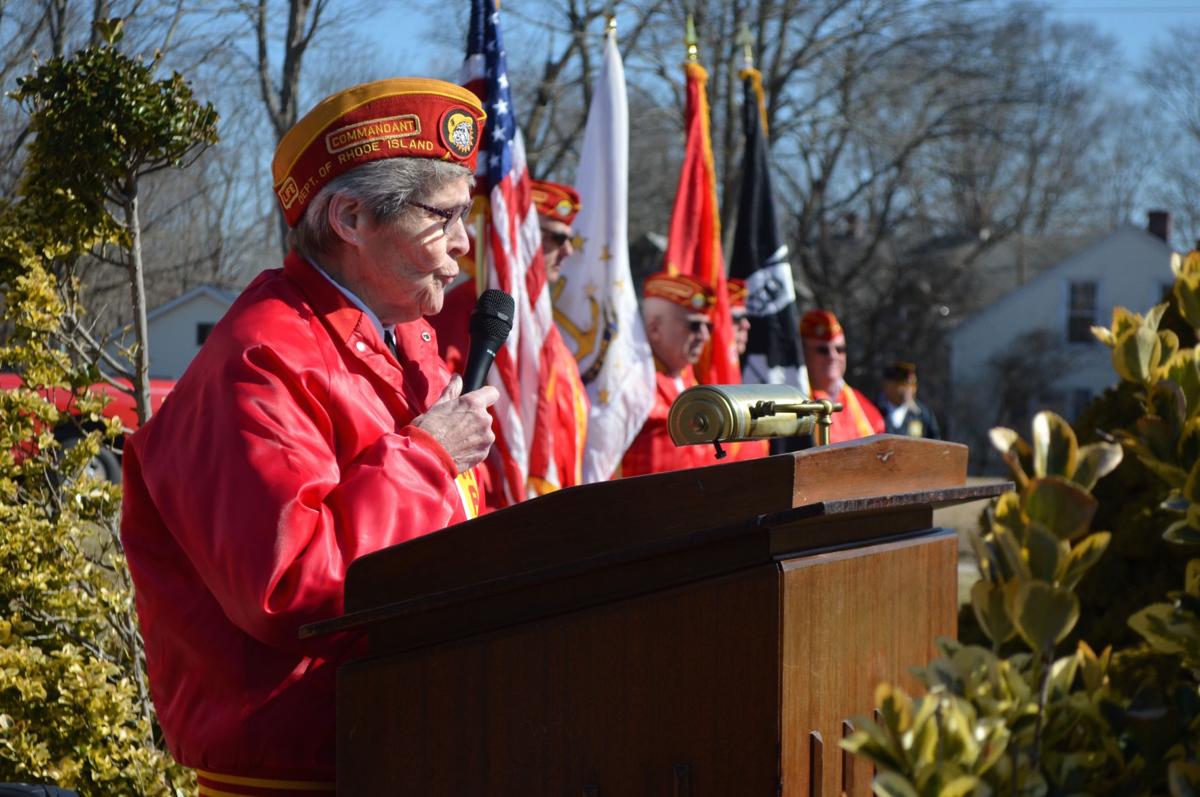 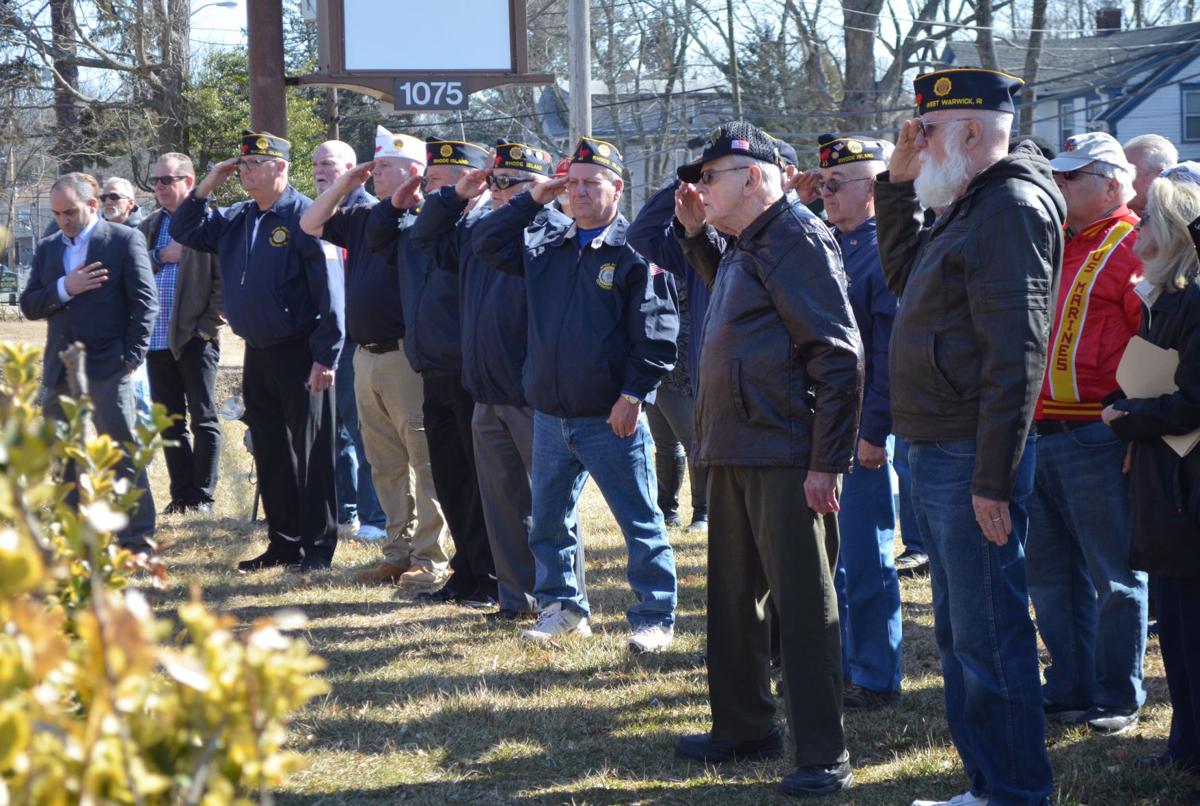 Veterans in attendance stand in salute. 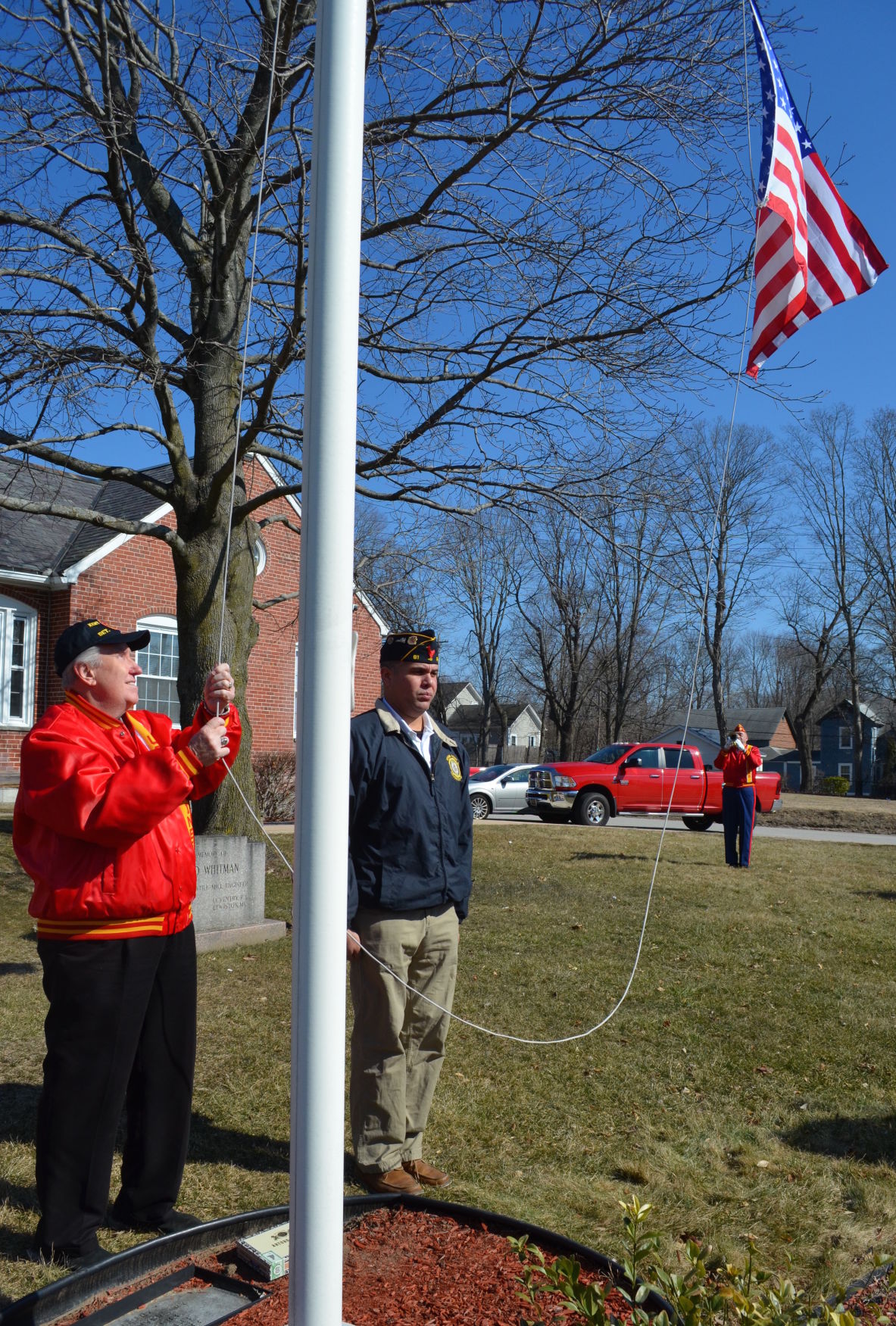 The American flag is raised. 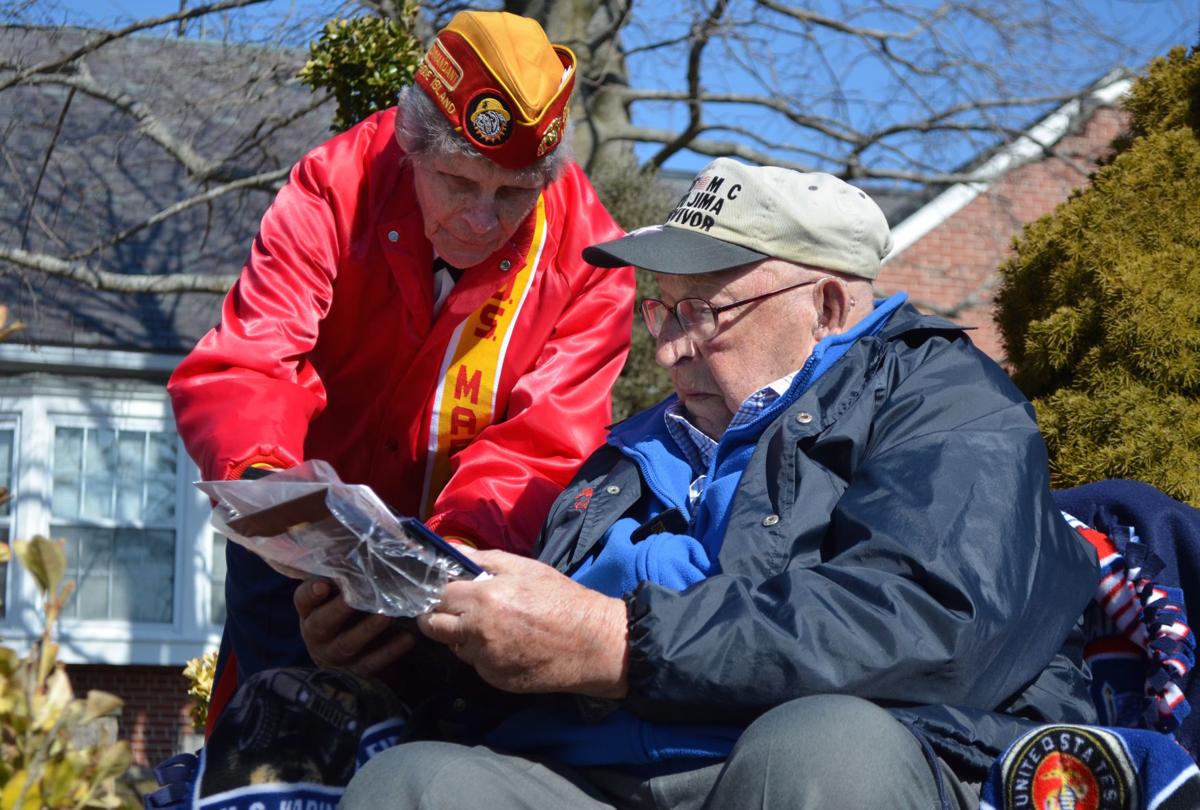 Deptula presents Femino with an award. 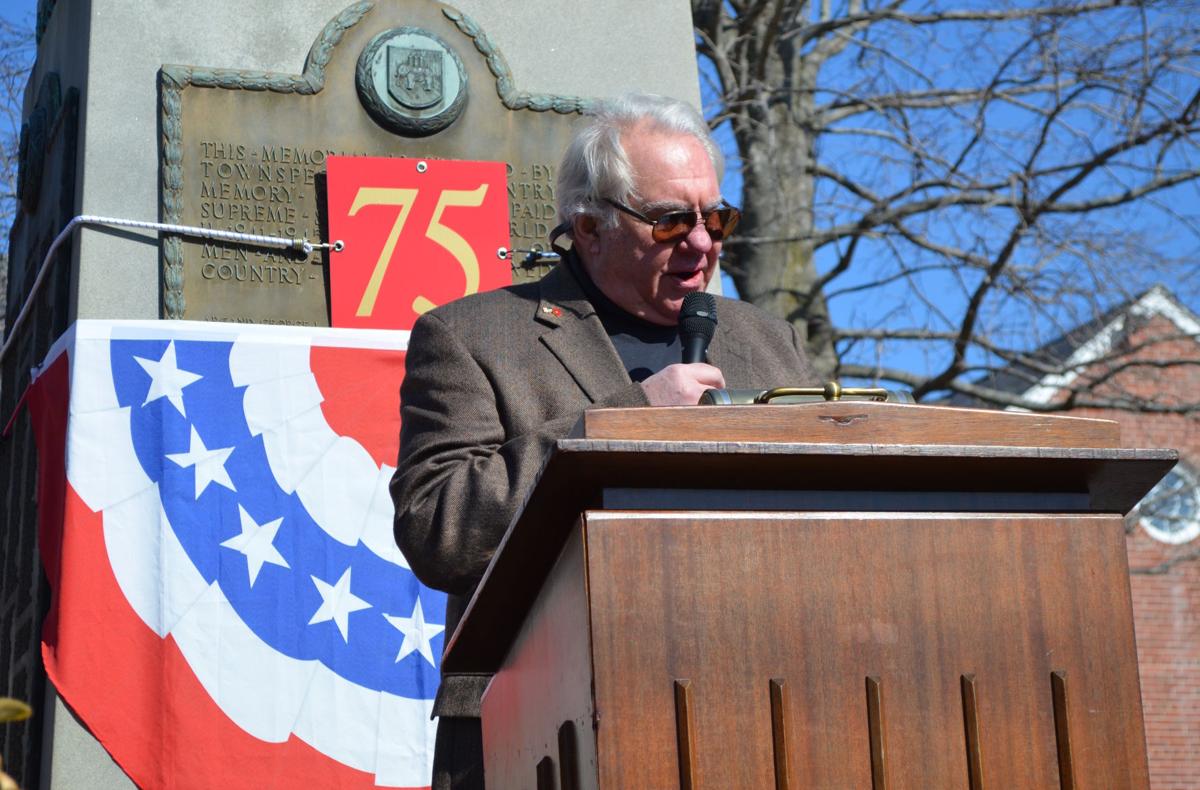 Pat Femino, a resident of North Smithfield and survivor of the Battle of Iwo Jima, was the guest of honor during a ceremony recognizing the raising of the flag over Iwo Jima.

Veterans in attendance stand in salute.

The American flag is raised.

Deptula presents Femino with an award.

COVENTRY — Seventy-five years ago, Marine Pfc. Placido “Pat” Femino stood among his fellow Marines watching intently as an American flag was hoisted above Mount Suribachi on the tiny island of Iwo Jima.

“The island of Iwo Jima is just a spec in the Pacific,” Femino said, facing a large crowd on the lawn of the former Coventry Police Station as he recalled one of the major battles of World War II. “Iwo Jima claimed the lives of beautiful young men, red-blooded Americans who loved their country.”

The month-long battle resulted in more than 26,000 American casualties, and claimed the lives of close to 7,000 Marines.

“They paid for the freedom that we share today,” Femino continued. “God bless them all.”

Sitting in a lawn chair before Coventry’s WWII monument, the words “Iwo Jima Survivor” printed on his hat, the 95-year-old North Smithfield resident was the guest of honor Sunday during a ceremony recognizing the pivotal WWII battle that he served in and the iconic moment in history that he bore witness to.

“I think we all know that in 1945, during World War II, U.S. Marines on Iwo Jima captured Mount Suribachi, where they raised two American flags,” Peter Wisnieski, commander of VFW Post 9404, said as he welcomed those gathered.

The United States invaded the Japanese island of Iwo Jima on Feb. 19, 1945 as part of its island-hopping strategy to defeat Japan. Mount Suribachi dominates Iwo Jima, and Americans succeeded in capturing it four days after arriving on the island, though the battle didn’t officially end until March 26.

The first flag raised atop the island’s highest point was captured in several photos by Louis Lowery, a Marine photographer for Leatherneck magazine. But that flag was soon ordered replaced by a larger one, and it was the second flag-raising that photographer Joe Rosenthal of The Associated Press snapped, capturing a photograph that would become one of the most famous of all time.

Femino was among those who watched as Old Glory was raised — twice — over Iwo Jima.

“We’re here to honor Pat for his courageous years of service,” Wisnieski said, “and for him witnessing both the flag-raisings.”

Sunday’s ceremony was organized by American Legion SPRM Post 81, VFW Coventry Memorial Post 9404 and the Kent County Marine Corps League as part of a yearlong recognition of the 75th anniversaries of several WWII events. Beginning last June with D-Day, the veterans groups have gathered on several significant anniversaries at Coventry’s WWII monument to hang patriotic bunting and a “75” emblem.

Following a prayer by Chaplain Robert Lancia, a recitation of the Pledge of Allegiance and an acapella performance of “The Star-Spangled Banner,” Wisnieski took a moment to thank some of those in attendance, including Reps. Sam Azzinaro and George Nardone and Coventry’s interim town manager Ed Warzycha.

Jane Deptula, commandant of the Marine Corps Department of Rhode Island, then took the podium to deliver remarks on the significance of the anniversary.

“I share this piece of history that should not be forgotten,” Deptula said, the number “75” posted to the monument behind her. “It should be retold to our children and grandchildren so that they realize the sacrifice made by the men and women who were willing to give all for this great country.”

Donning a red and yellow Marine Corps League hat and matching cap, Deptula spoke of the fateful day seven and a half decades ago when U.S. Marines captured Suribachi.

“The flag rose above the mountain, clearly visible from land and sea,” Deptula recounted the original flag raising. “On the sandy terrace below, tired men wept in their foxholes; unshaven men on the beaches thumped each other on the back and shouted across the ships; whistles, horns and bells rang out. This was the flag raising on Iwo Jima that thrilled the troops.”

“Although the battle and ultimate victory was going to last another 30 days, this event was a light in the darkness for the valiant, battle-weary Marines,” she added.

Bugler Mike Jackson played “To the Colors” while an American flag was raised slowly above those gathered Sunday; veterans in the crowd held their hats across their chests as Deptula read the names of Iwo Jima survivors who have recently passed away.

Among the survivors mentioned was Kenneth Woodbury, of West Warwick, who died in 2015 at the age of 90.

A rifle salute was made, and “Taps” echoed across the lawn.

To end the ceremony, Wisnieski and Deptula presented Femino with an American flag and several other gifts on behalf of legislators and the organizations that organized the event.

“God bless you all for everything,” Femino said, just before a long applause broke out. “I am very humbled and thankful.”