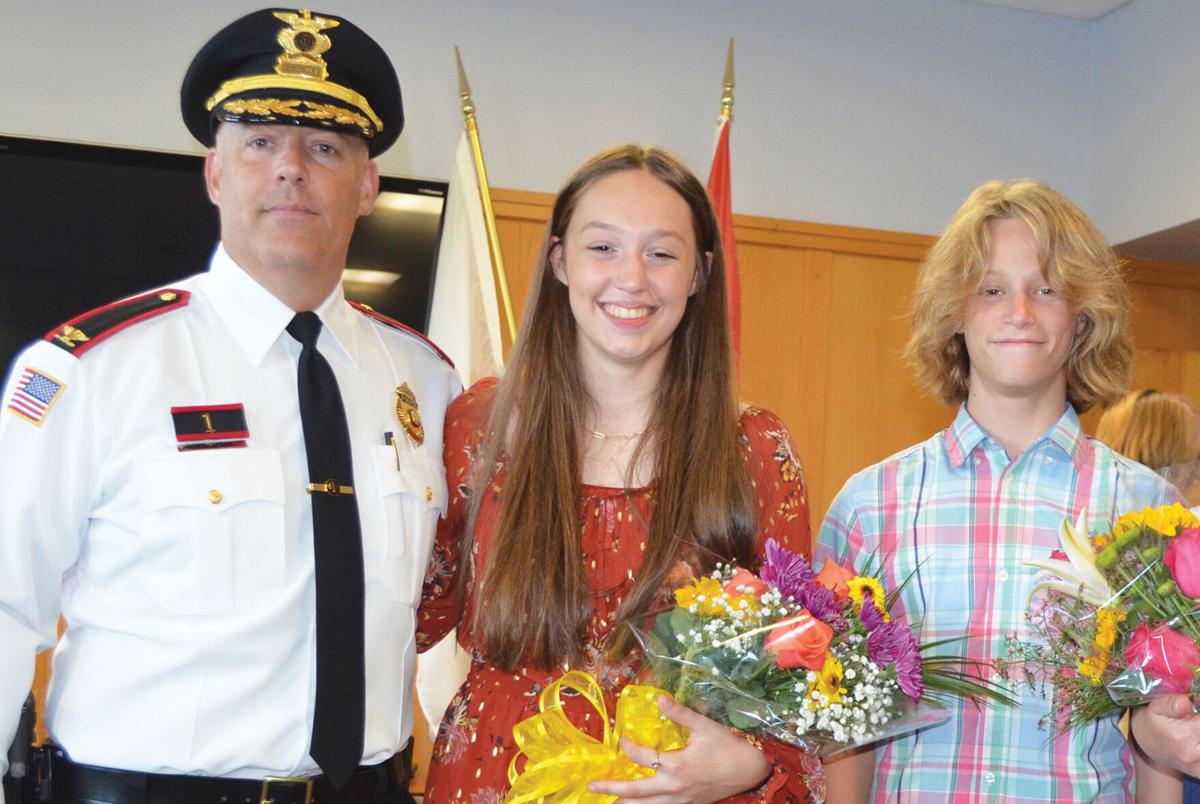 West Warwick Chief of Police Ernest Lavigne poses for a photo with his daughter Mallory and son Luc after being sworn in Tuesday night. 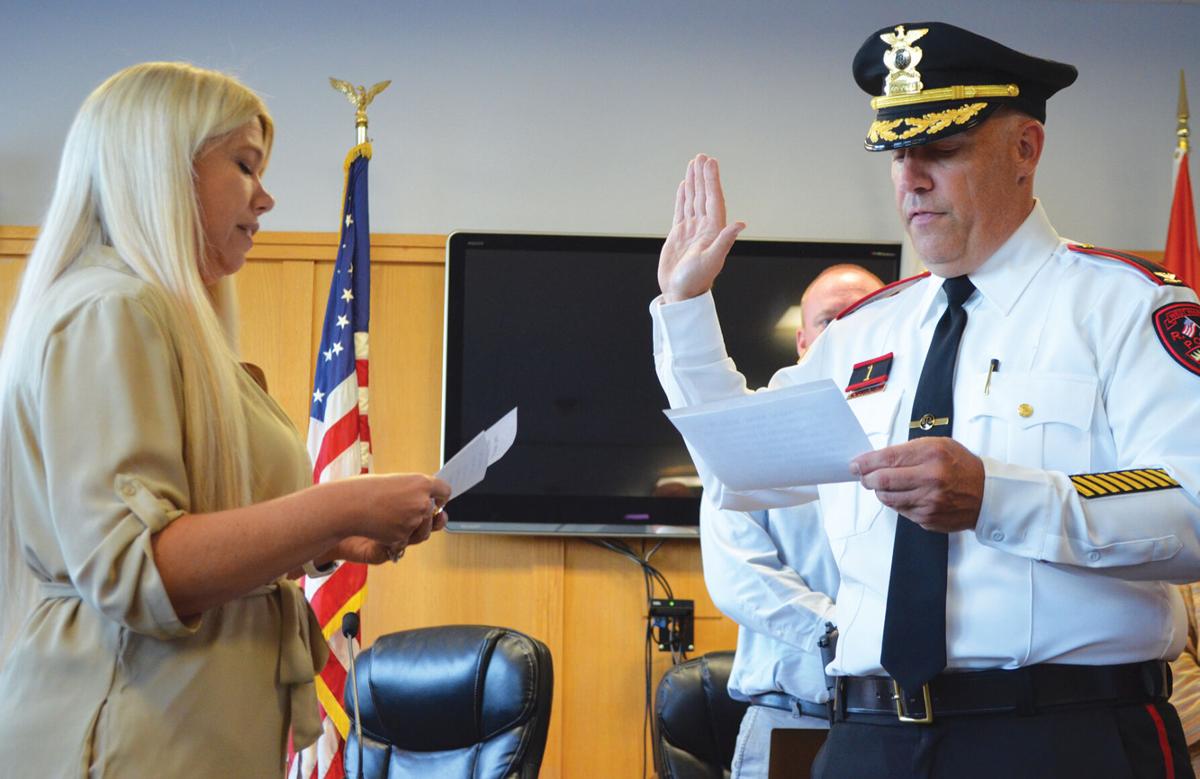 West Warwick Chief of Police Ernest Lavigne poses for a photo with his daughter Mallory and son Luc after being sworn in Tuesday night.

WEST WARWICK — Since being hired by the West Warwick Police Department nearly 28 years ago, the idea that he would one day serve at the agency’s helm had never crossed Ernest Lavigne’s mind.

But there was at least one person who seemed to know that Lavigne would one day become chief.

“He said to me on a couple of occasions, ‘one day you’ll be sitting in this office,’” Lavigne said, recalling past conversations with then-chief Paul Villa, who served in the position from 2008 to 2011. “Never once did I ever think I’d be the chief of police. I just never thought I’d have the opportunity, but here I am.”

Now, having been ceremonially sworn in Tuesday — his three-year contract actually took effect a month ago — he’s excited for what’s to come.

“I’m optimistic about the direction the Town of West Warwick if heading,” he said Wednesday. “I’m excited to lead these men and women and to try new things.”

Lavigne joined the department as a patrolman in 1994, and after a decade in that role rose quickly through the ranks — to sergeant, then lieutenant, then captain and finally to major, before being named chief.

Lavigne had always been interested in law enforcement, but it was during his senior year of high school that he realized it was what he wanted to pursue as a career.

Several factors drew him to the field, he said. For one thing, he loves to solve problems.

“My goal as a police officer is to help find solutions,” said Lavigne, who grew up in Warwick.

He likes to be challenged, he added, and enjoys the variety that a career in law enforcement provides. No two days are the same, he said, and he likes that.

“At the beginning of my career, not being behind a desk was hugely important for me,” he said. “I wanted to be out there in the community.”

During his days as a patrolman, Lavigne made a strong effort to get to know the business owners and other community members in the areas he covered.

Lavigne is a major proponent of community policing. Especially these days, he said, as police worldwide have come under greater scrutiny than ever, it’s crucial that all members of the police department do their part to better the community where they serve.

“We’re certainly under a microscope more than we have been,” he said, “and being able to bridge that gap is vitally important.”

The excitement of the job is part of what’s kept him doing it as long as he has been. And his consistent movement through the ranks of the department has helped ensure he’s never been bored.

“I want to get a good grasp on a rank,” he said, “I want to pass that knowledge along to somebody else, and then I’m up for a new challenge.”

He’s also benefited from having worked in every division within the department, he said. That exposure, he said, has given him a well-rounded understanding of the law enforcement portion of the criminal justice system.

Now in the position of chief, Lavigne has a number of goals for the department. Among them is to reinforce partnerships with the various other agencies that work in West Warwick in order to better address residents’ specific needs.

He said he wants the department to work closely with organizations like the Health Equity Zone, Thundermist and the West Warwick Senior Center, for example.

“They really do a phenomenal job with addressing a lot of the needs that we just don’t have the skills or the resources to address,” he said.

Ensuring that the department’s members are well aware or those community resources is high on Lavigne’s to-do list, he added. He said that establishing easy methods for directing the resources where they’re needed is one of his biggest goals.

“If a community member is having an issue — drugs, alcohol, domestic violence — and we’re not doing everything we can to get them heading in the right direction, we’re not really solving the problem,” he said.

“I just want to make sure that the police department is a responsive partner,” he continued, “and that we know what resources are available to our community so that our officers are equipped to point them in the right direction, or they know who to look to for help in dealing with a bigger problem than we’re able to address in a three-minute police interaction.”

He also wants to encourage members of the department to come up with creative ways of addressing issues they may encounter.

And if an outside-the-box solution doesn’t work, he added, then he wants it to be viewed as a teachable moment.

“That type of stuff can pay big dividends to them personally and professionally,” he said.

On Tuesday night, his wife Stacey, daughter Mallory and son Luc by his side, Lavigne raised his right hand and swore to support the constitution and the laws of the nation and of the state, to observe the charter and the ordinances of the town, and to faithfully discharge the duties of the chief’s office.

Among those gathered to witness the event were retired chiefs Villa and Peter Broussea; nearby stood Mark Knott, who left the chief position to take up the reins as West Warwick’s town manager.

After being sworn in, Lavigne took a minute to thank the men and women of the department — both sworn and civilian — for “the outstanding work [they] do each and every day.”

“Your commitment to the betterment of West Warwick shows in all that you do,” he said before a packed council chambers.

Lavigne thanked his wife and children for their unwavering support, and his late mother for her wisdom and selflessness.

He also gave thanks to past members of the department, and, specifically, to retired chief Edmund Izzi, who hired him more than two and a half decades ago.

“You gave a 21-year-old kid from Warwick an opportunity to fulfill his dream of being a police officer,” he said, “and I cannot possibly thank you enough.”

During his interview for the patrolman job, Lavigne was asked by the then-police chief why he should be considered for the position, when chances were that he would quit to join the force in his hometown once the opportunity arose.

“I said, ‘if you give me the opportunity to be hired by the West Warwick Police Department, you have my word that I’ll never leave the agency,’” he recalled.

And here he is.

Despite now living in Coventry, Lavigne said that, for him, there’s no place like West Warwick.

“I don’t consider myself an outsider,” he said. “I consider West Warwick my hometown.”

What a great photo. Congratulations. A picture tells quite a bit.

(Maybe you'll now have more mercy on the Skaters!!)

CONGRATULATIONS and continued Safety & Service throughout your Career!