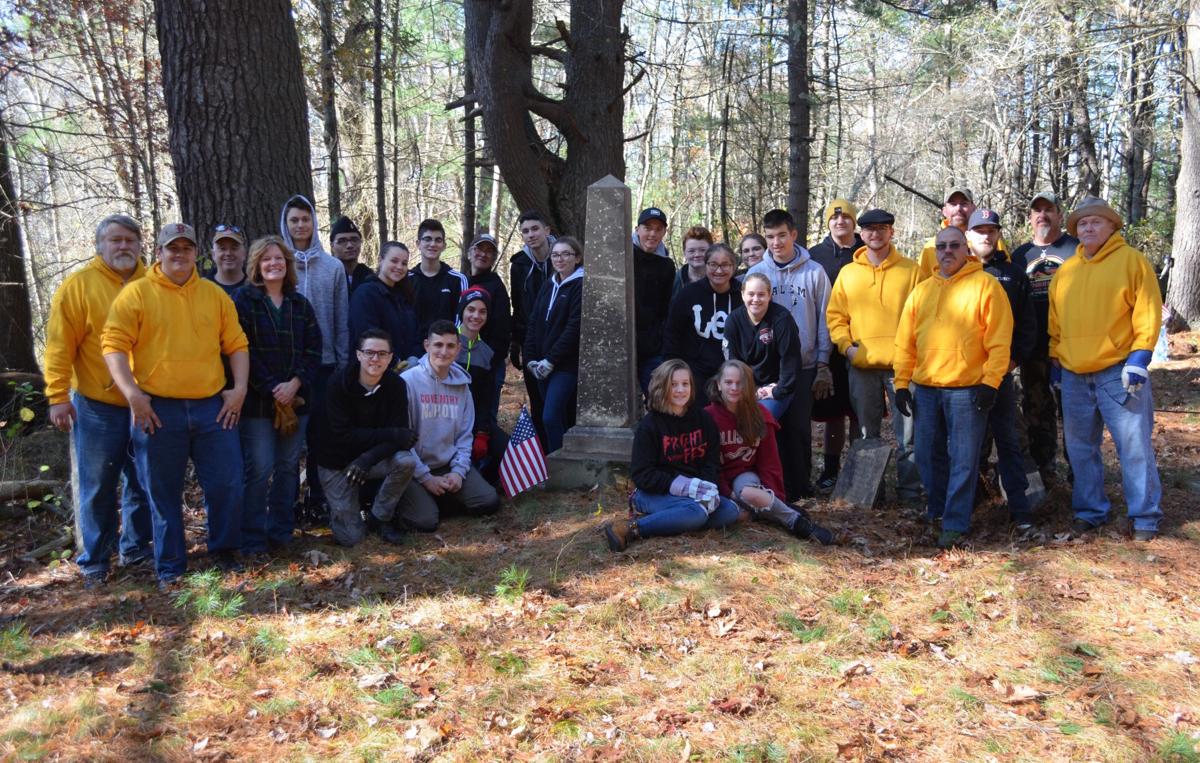 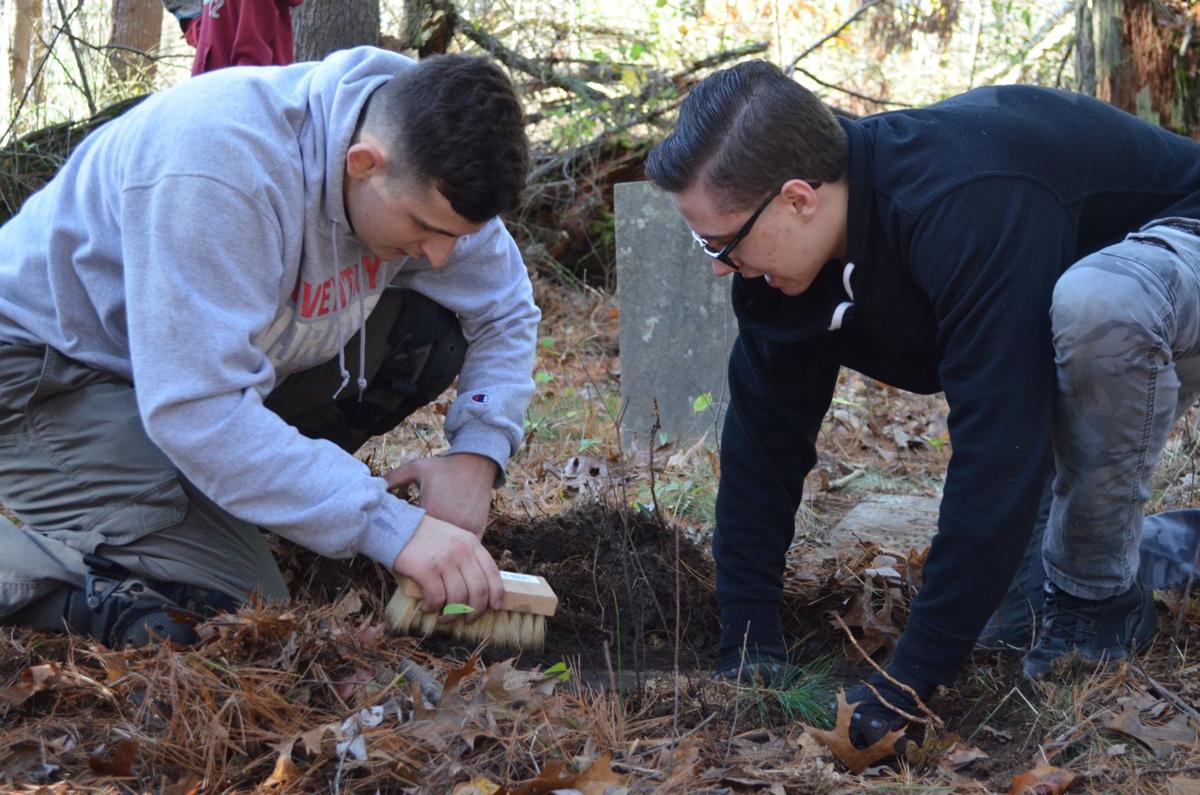 COVENTRY — Tucked into the wooded conservation land behind the Coventry Town Hall, stone markers indicate the final resting places of nearly two dozen Rhode Islanders. Bearing dates stretching back some 200 years, many of the stones before this weekend had been knocked to the ground, concealed over time by layers of dirt and vegetation.

“There are people buried here who helped the community when we were not even born,” Sam DiBiasio said, taking a break from clearing the overgrowth that had taken over much of the historical cemetery, one of hundreds in Coventry. “Now it’s our time to give back.”

“This is a veterans cemetery,” she added. “You know they would do it for us.”

Both seniors at Coventry High School, DiBiasio and Osbourne were two of almost 20 members of the school’s Navy Junior Reserve Officer Training Corps (JROTC) who gathered Sunday morning to pitch in rehabilitating the cemetery.

The project is the latest being tackled by Major Sullivan Ballou Camp 3, the local chapter of the Sons Of Union Veterans Of The Civil War. Driven by their mission to preserve the memory of those who fought for the Union during the Civil War, members of Camp 3 have focused primarily on restoring the often neglected cemeteries where Union soldiers are buried.

That focus on preservation aligns well with what the students have been learning, said Master Chief Ed Kay, who added that the JROTC curriculum teaches the value of citizenship and the importance of honoring heritage.

“All that is touched on here today,” Kay said. “They get to see the vets raising stones and help with the beautification of the cemetery, but not only that—they’re actually helping with history.”

In fact, he added, students were able Sunday to locate a gravestone that had been missing.

“It joins our lectures on history and heritage with duty and responsibility and service to the community,” Kay continued.

Mark Brelsford, commander of the camp, said he appreciated the help from the students, and added that he hopes they might be inspired through their participation to look into their own family histories.

“Some of these guys might get motivated to search to see if they have any historical figures in their families,” he said, as beside him a couple students used trowels and brushes to uncover what they thought may be a headstone.

The sun peaked at the cemetery through overhanging tree branches Sunday, as JROTC students worked closely with members of Major Sullivan Ballou Camp 3. While some raked leaves and various debris from the ground surrounding the graves, others used hedge clippers to clear the branches that crept in from the cemetery’s outskirts.

In the center of the site, a 10-foot tripod was positioned carefully above a weathered stone pedestal where a nearly 600-pound obelisk had once stood. Carefully, camp members hoisted the obelisk, half-covered in dirt from years spent on its side, back to position.

The site, called the Matteson Family Cemetery, contains 30 burials in all with 22 inscribed stones, according to the Rhode Island Historic Cemeteries Commission. Dates on the stones range from 1794 to 1883.

One of the goals in restoring the cemetery, said Ben Frail, the camp’s assistant secretary, was to make it more accessible for visitors hoping to pay their respects.

With the students there to help with tasks like clearing, members of Major Sullivan Ballou Camp 3 were able to focus on lifting fallen stones, Frail added.

Having the students there was a “massive help,” he said, adding that it turned what could have taken five days to complete into a one- or two-day project.

And as they dug gently into the earth, hollering to one another each time they encountered what could be a grave marker, Kay applauded his students for their dedication to community service. In fact, many of the students there Sunday had woken up at 3 a.m. the day before to travel to Massachusetts for an all-day drill meet.

“Their whole weekend has been consumed with different things,” Kay said, “and we’ve still had such a great turnout.”

Ryan Sheldon, a ninth-grader in the JROTC, said he was proud to lend a hand.

“It feels good to have an active influence on the community,” Sheldon said, “and to be able to look around after we’re done and see exactly what we did.”

“We want to help our community,” DiBiasio added. “That’s why we do a lot of these community service events throughout the year.”

The JROTC relies on the support of local organizations, DiBiasio said. For her and her peers, giving back through community service is a way of showing their appreciation for those who’ve helped them.

“We just want to give back to them as much as we can,” Osborne said.