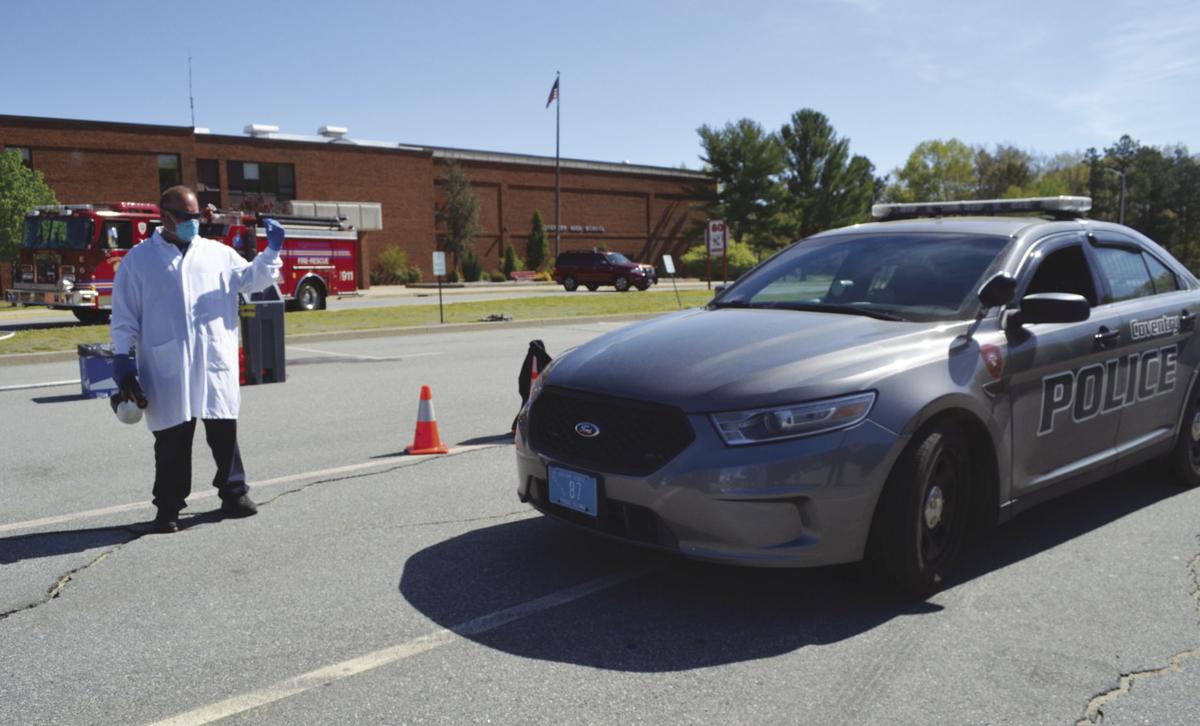 Coventry’s COVID-19 task force on Wednesday organized a mass decontamination of all municipal vehicles. Pictured: a Coventry police cruiser is directed into a spot in the high school parking lot. 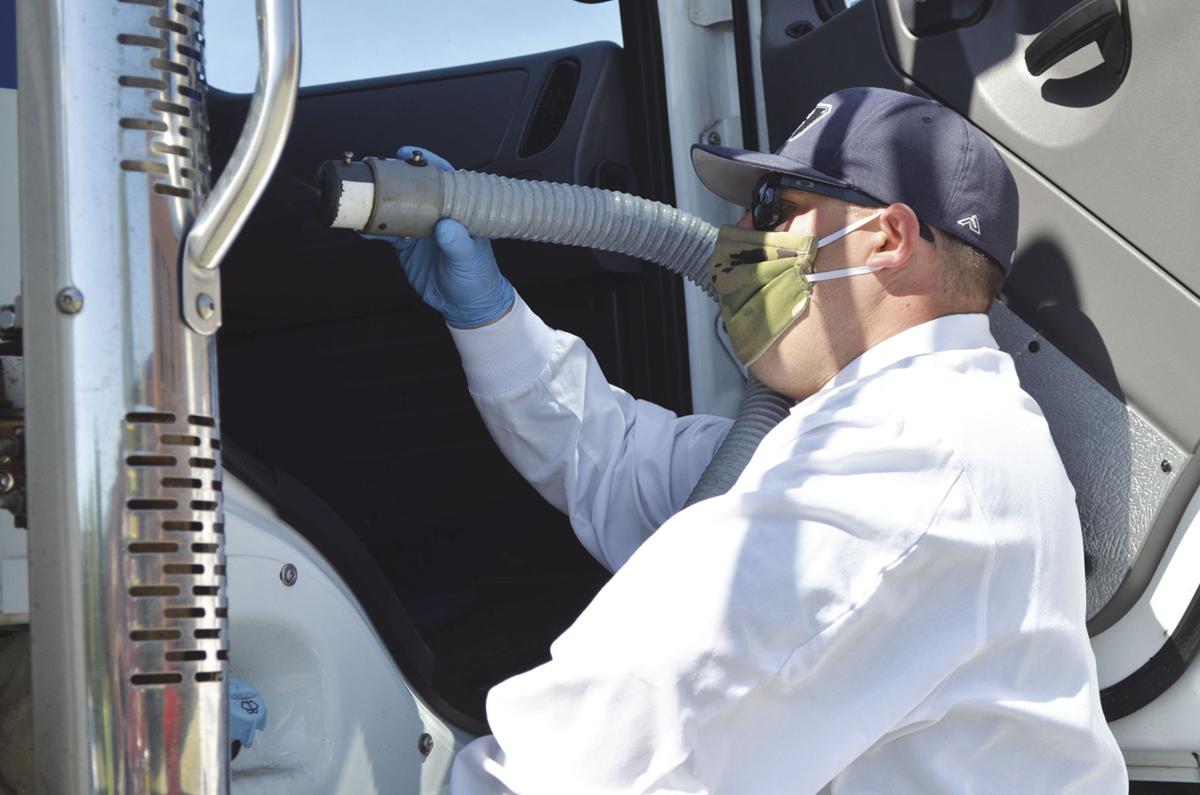 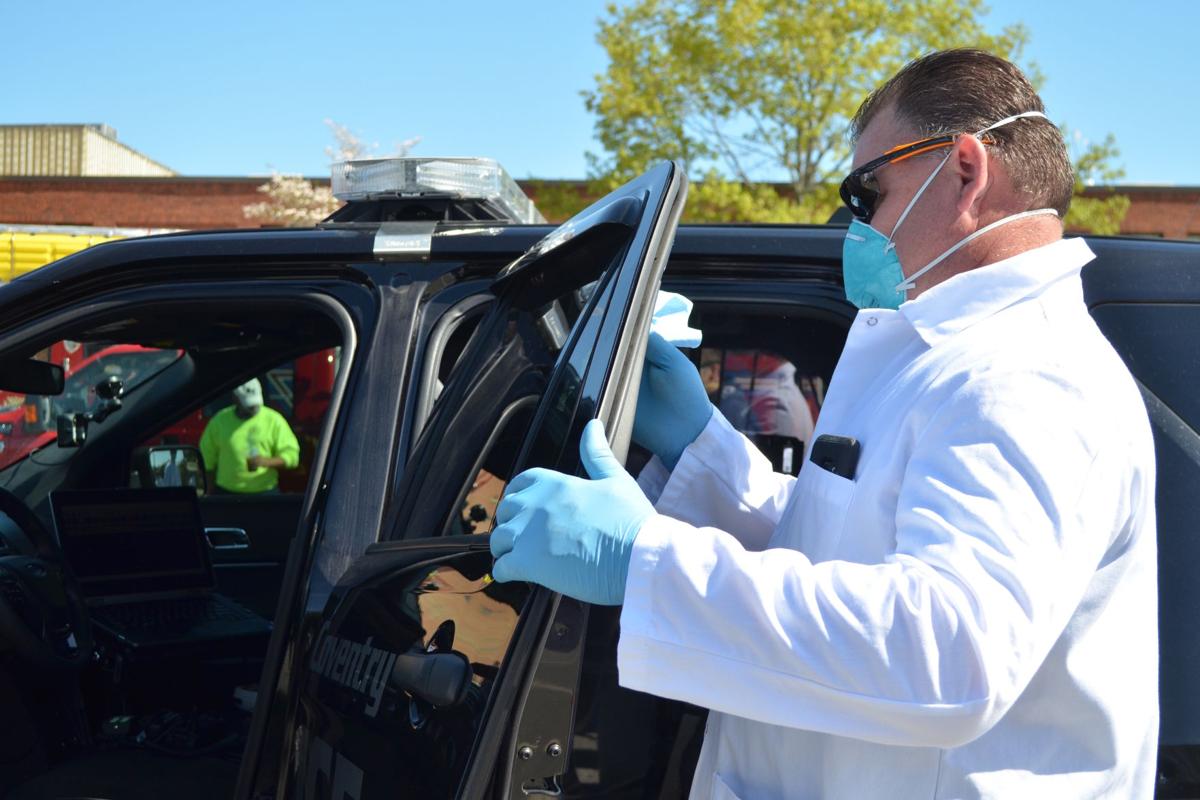 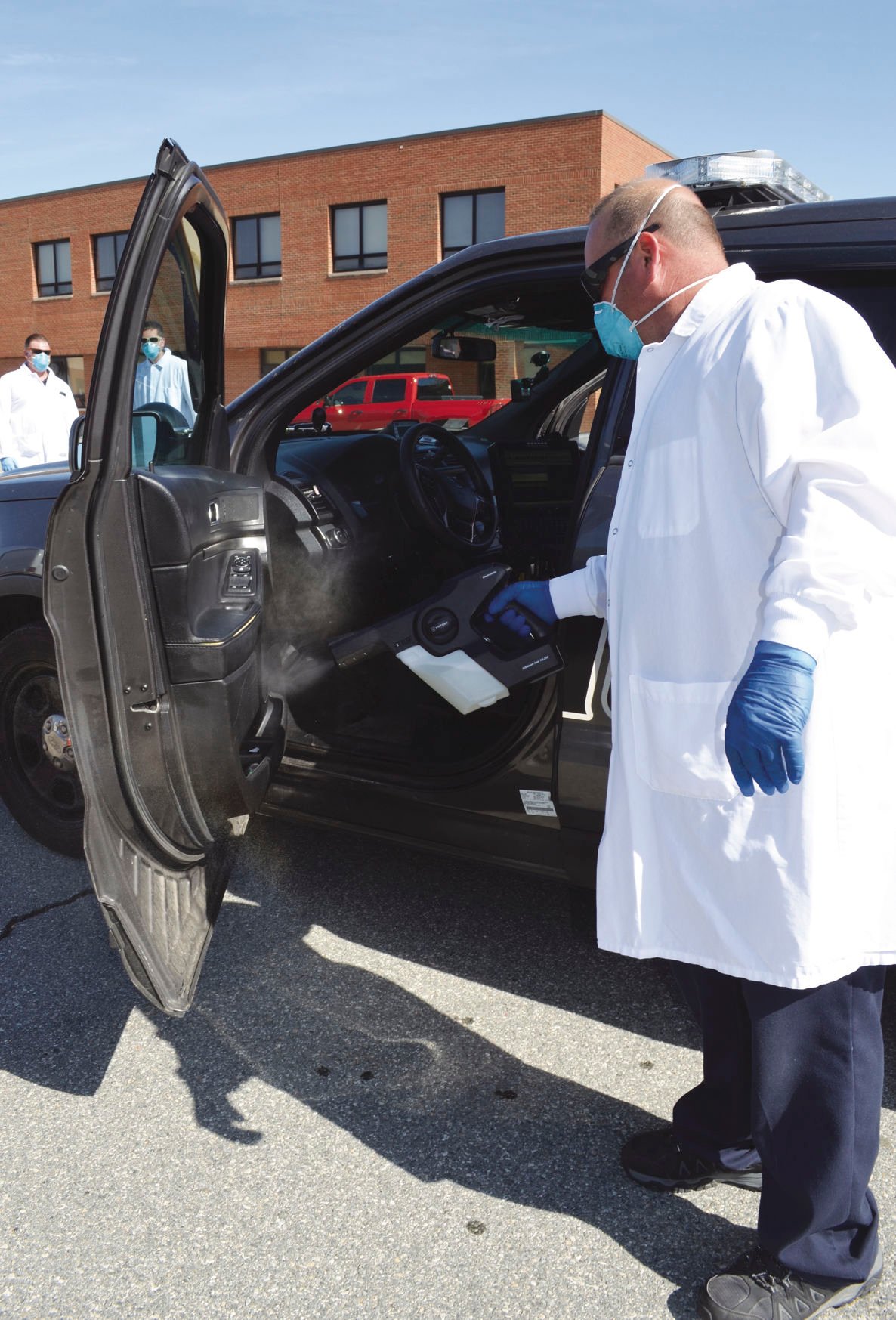 Coventry’s COVID-19 task force on Wednesday organized a mass decontamination of all municipal vehicles. Pictured: a Coventry police cruiser is directed into a spot in the high school parking lot.

COVENTRY — After two local firefighters tested positive for COVID-19 in the early days of the pandemic, Frank Brown, chief of the Central Coventry and Hopkins Hill fire districts, made himself a promise.

“It was a scary time,” Brown recalled, standing in the parking lot of Coventry High School. “I thought about those guys everyday, and I made a promise to myself that we’re going to do everything we can to keep this out of our environment going forward.”

Both firefighters have since returned to work having fully recovered, and Brown has kept his vow to do all he can to stem the spread of COVID-19.

“This is just another step in that process,” he said Wednesday morning, while nearby the interior of a police cruiser was being sprayed with a disinfectant during a mass decontamination of each of Coventry’s municipal vehicles. “It’s just the right thing to do.”

Brown got the idea to host the event after hearing about a similar operation conducted last month by the New Bedford Fire Department. With support from Coventry's municipal directors, the mass decontamination was organized by the town's COVID-19 task force, a group composed of around 14 local first responders.

While the town has been vigilant in its efforts to check in with how employees are feeling and to regularly check temperatures, Brown said he figured decontaminating each vehicle would be a good way to take that protection to another level.

“We’re also sending a message to the public that we’re caring for them by taking care of our own at a very high level,” he added. “From the moment they report to work, to the vehicles they ride in, we’re doing a very good job to keep this out of our environment.”

Vehicles were disinfected by the Hopkins Hill and Central Coventry firefighters who comprise one of Rhode Island’s four regional decontamination teams, housed in a garage outside the Hopkins Hill Fire Department.

As they arrived at random intervals Wednesday, the drivers of dump trucks and parks and rec vans and housing authority vehicles were each directed to one of several marked spaces; donning long white coats, face masks and rubber gloves, decon team members took turns spraying and wiping down each vehicle as it arrived.

As he waited for his truck to be decontaminated, Ernie Nardolillo, an operator at the public works department, said he appreciated the town’s efforts to “[go] above and beyond” for its employees.

“This is just a great opportunity to make sure we’re working in safe conditions,” Nardolillo said, a mask covering his mouth and nose.

Sgt. Alyssa Cloutier, of the Coventry Police Department, echoed that.

“This will keep us safe, and hopefully will keep the public safe, too,” she said, standing at a makeshift hand-washing station.

Cloutier said she and her colleagues have been careful to sanitize their cruisers during each shift. And whenever an officer transports someone suspected of contamination, she added, their vehicles are brought to the decon station at Hopkins Hill for a thorough cleansing.

The method used during Wednesday’s mass decontamination event mirrored the process typically followed by the decontamination team. Each vehicle was sprayed down using an electrostatic sprayer that coated its interior with a charged solution. The disinfectant then was left to dwell for a few minutes before the excess was wiped away.

“It just does a fabulous job,” Brown added of the electrostatic sprayer.

Though he wasn’t sure how many vehicles would end up coming through, Brown estimated Wednesday morning that the decon team could end up tackling around 60 during the four-hour event. And if all went well, he added, he’d like to hold more mass decontamination events inviting neighboring towns, like West Warwick, to have their vehicles cleaned.

He said he’d like to host similar events monthly.

“There’s nothing more precious than the people who are coming to work every day, and we should be taking care of them at a very high level,” Brown said, “and that’s what we’re doing by doing this.”