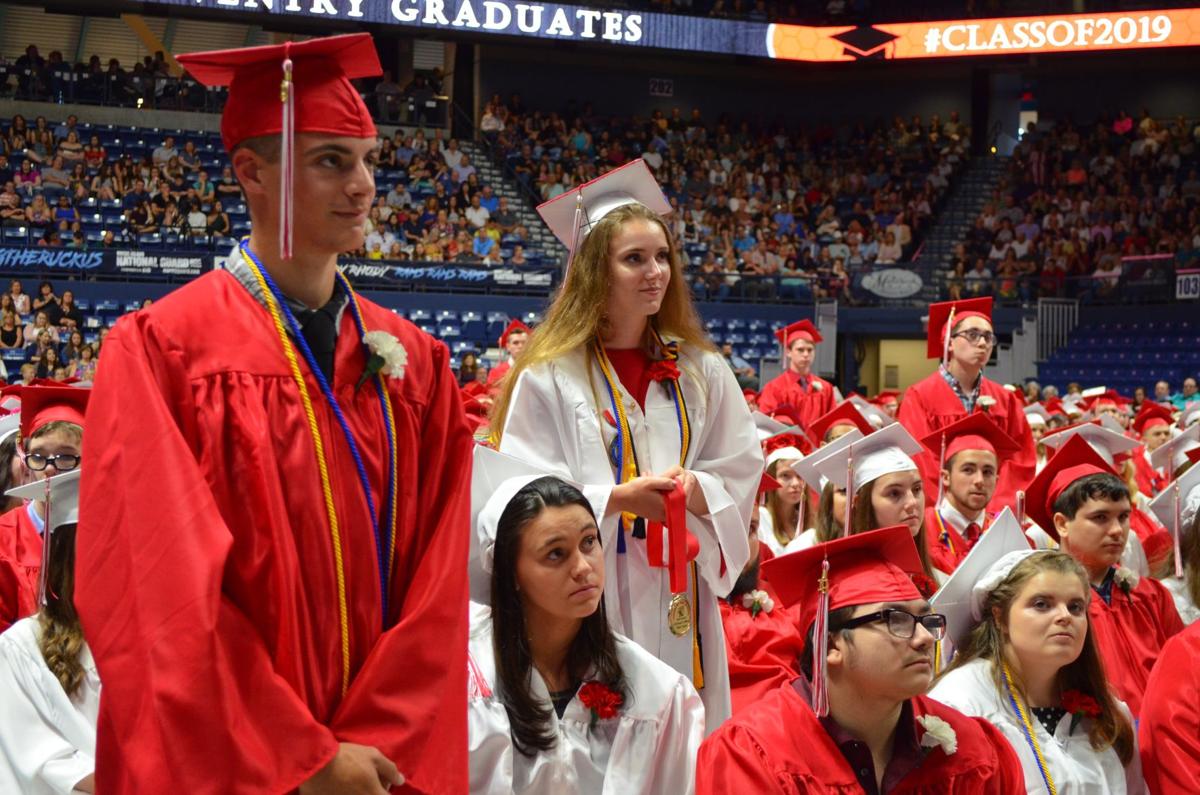 Jacob Fernandes and Rylee Campbell were among more than 20 graduates to receive Oaker Awards during Thursday’s ceremony. 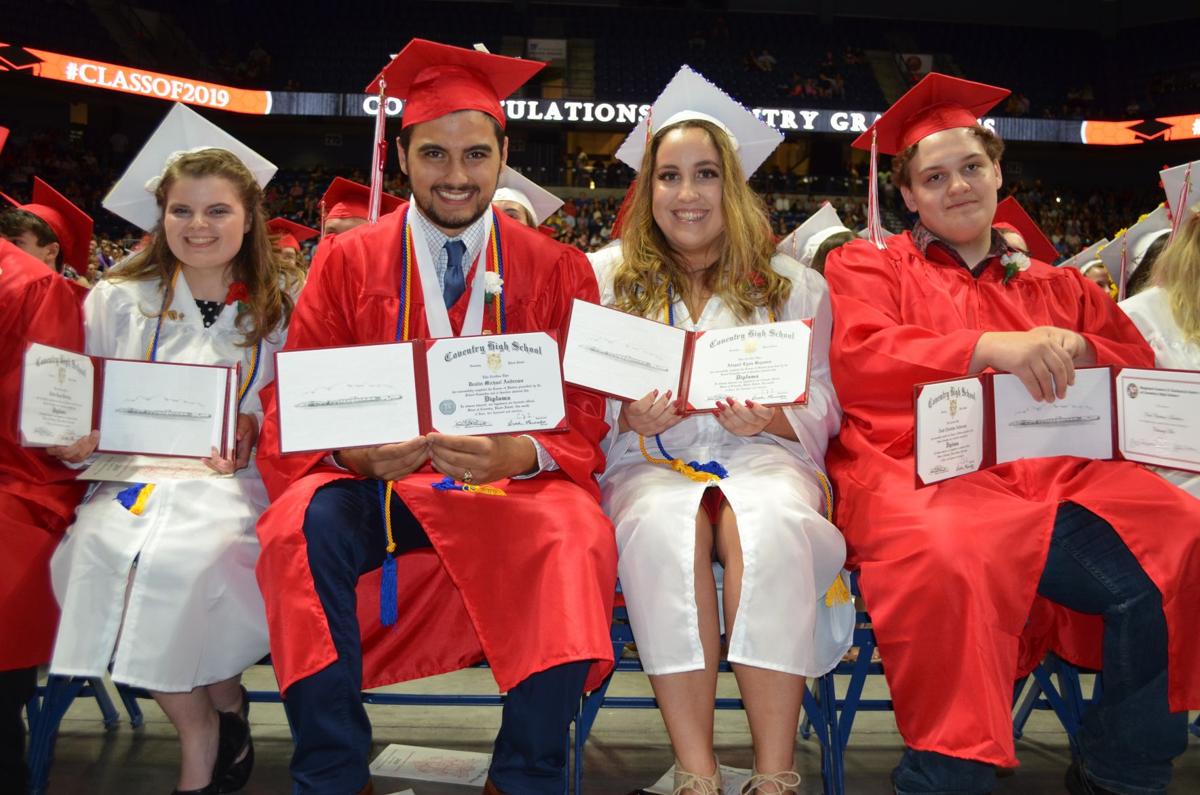 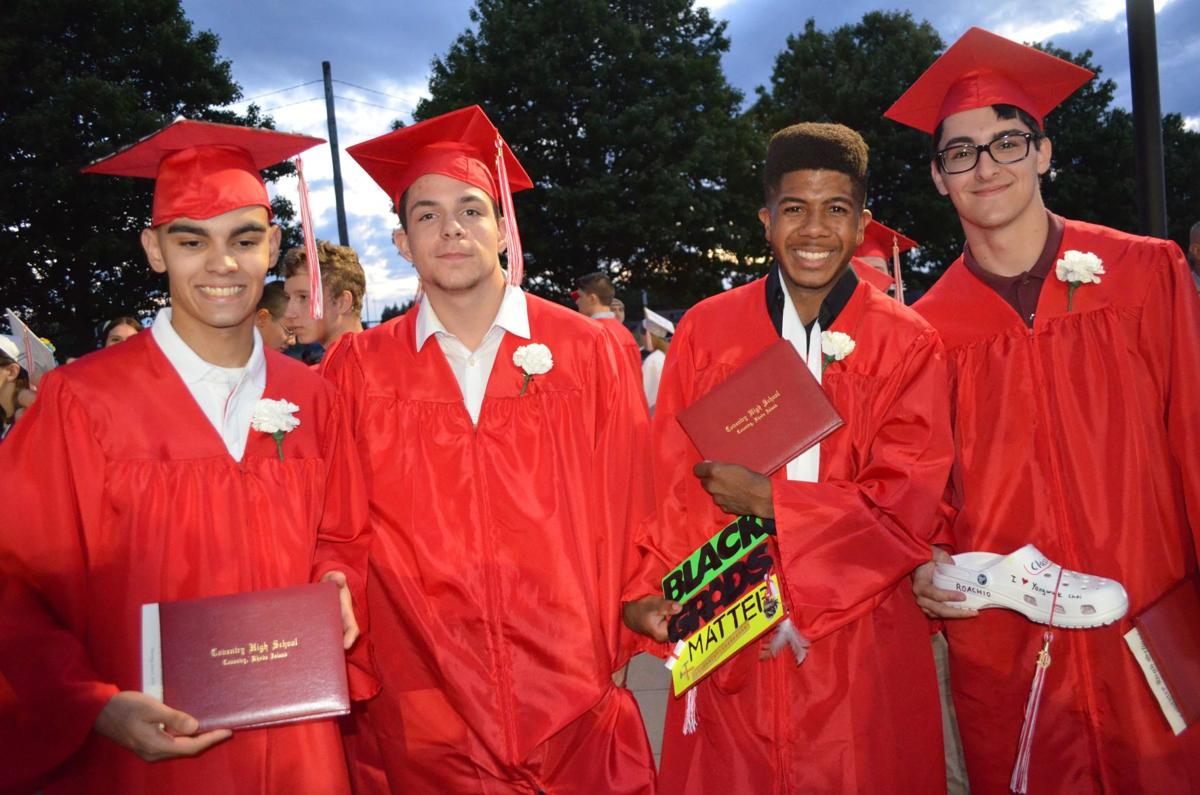 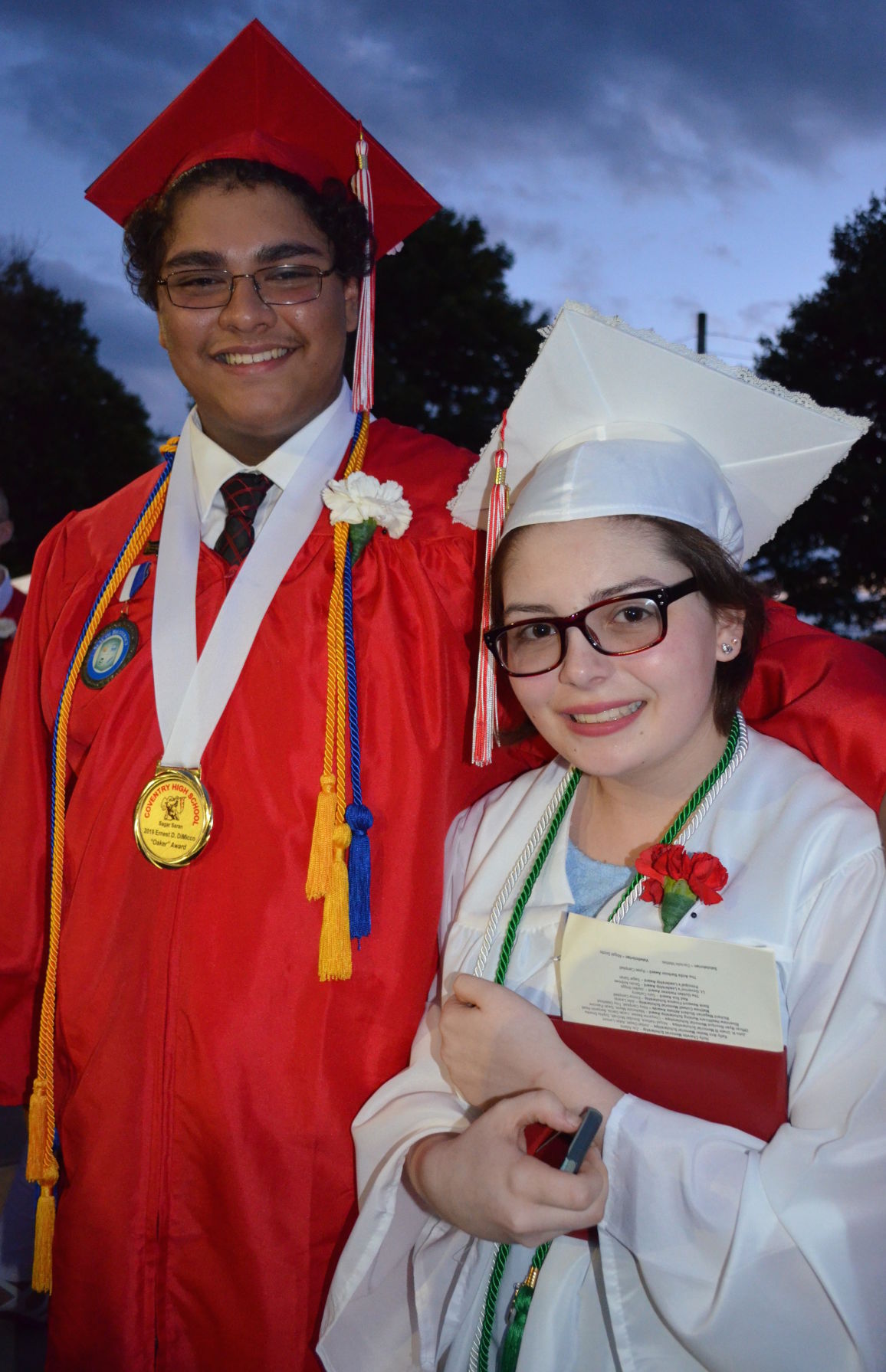 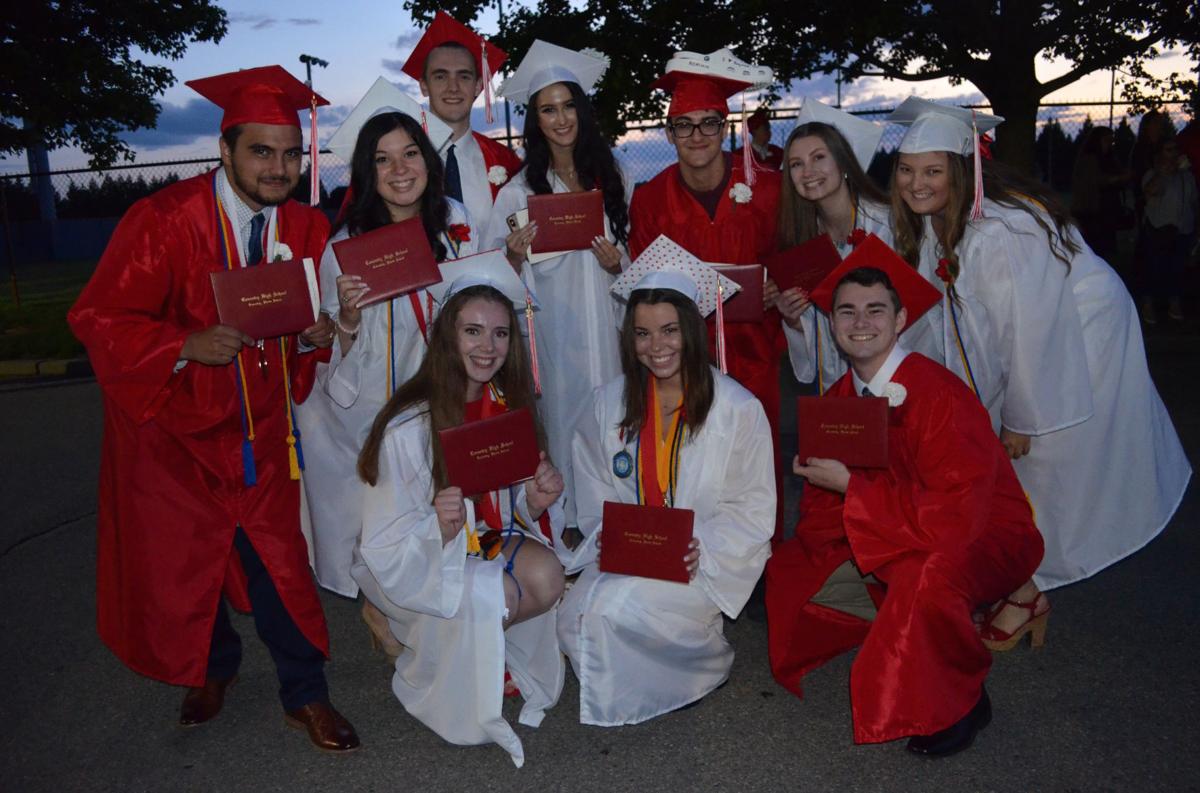 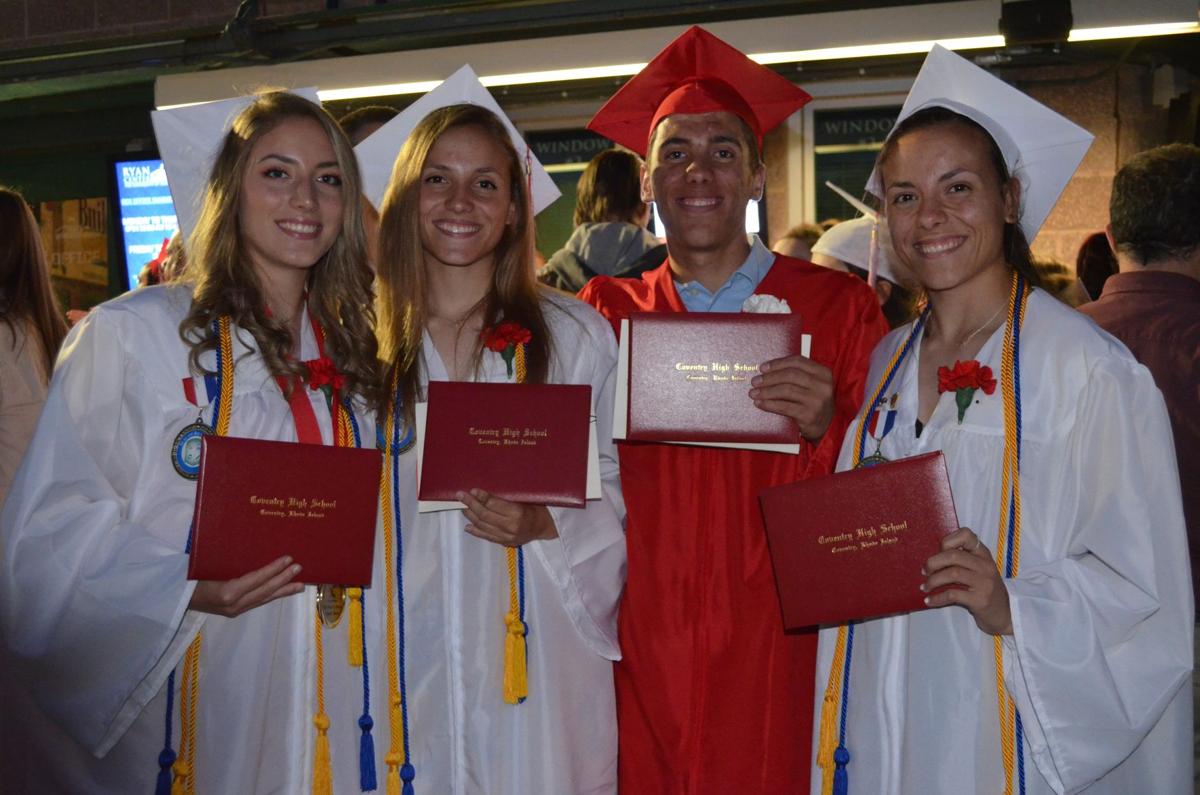 Jacob Fernandes and Rylee Campbell were among more than 20 graduates to receive Oaker Awards during Thursday’s ceremony.

KINGSTON — Before family and friends, 340 students became the latest group of Coventry High School alumni during last Thursday’s commencement ceremony, the 85th in the school’s history.

Donning white and red robes and decorated caps, graduates waved and flashed smiles as they processed into The Ryan Center to a rendition of Pomp and Circumstance performed by the Coventry High School Band.

Following a posting of the colors by the high school’s color guard, Sara Carberry, president of the senior class, kicked off the commencement exercises by reflecting on the “unforgettable journey” of high school.

“Individually, our time spent has been unique. But, together, we share a common bond as the class of 2019,” Carberry said, before recognizing the various paths her classmates have chosen for themselves beyond high school — from immediate employment, to serving in the armed forces, to seeking higher education.

“Today marks the first day of the start to our new life,” she added. “A new journey is about to unfold right in front of our eyes, and it will give a chance to accomplish our wildest dreams.”

In his address, Superintendent Craig Levis thanked the school committee, town council, school administrators and families of the graduates for the “crucial role” they’ve played in helping the graduates succeed.

The center then erupted in applause as Levis asked all teachers, coaches and support staff to stand for recognition.

After acknowledging the 75th anniversary of D-Day, Levis also asked that those who either have or are currently serving in the military stand for recognition, once again welcoming a roaring applause.

Levis noted that 13 of Thursday’s graduates have enlisted in either the Army, Navy, Air Force or Marine Corps.

Levis also spoke about his pride in the graduates’ athletic achievements, their accomplishments in the arts and their participation in various activities through the career and tech center.

“The academic achievements of this class are second to none,” he continued. “One just has to look at the list of colleges and universities that our students will be attending to recognize how others view a diploma from Coventry High School.”

But perhaps more than anything, Levis said he’ll “forever be grateful” for the graduates’ contributions to the Unified Oakers, a student-led initiative which he lauded for “making success for all students non-negotiable.”

Brooke Macomber, principal of the high school, also listed Unified as an exemplification of the kindness that she identified as the class of 2019’s “unifying quality.”

“I will never forget the work you’ve done to connect our school community and create an environment where all students feel a sense of belonging,” she said.

Photos flashed across screens at the corners of the Ryan Center as Macomber lauded that class’ capacity for teamwork, recounting the construction of their homecoming float; their routine at the Lip Sync; and the impressive dance moves demonstrated during Spirit Week.

In her address, Macomber spoke about how the current generation of high schoolers — and, specifically, the Coventry class of 2019 — defies the “kids these days” stereotype.

“According to experts, generation ‘Z’ is recognized as the most open-minded and accepting generation,” she said. “Never before has a group of young adults been so supportive of non-traditional relationships and respect and concern for the human rights of all people.”

As “the first true digital natives,” Thursday’s graduates have grown up with technology at their fingertips, Macomber said, adding that social media “has become an important part” of their lives. And while apps like Instagram and Snapchat may consume a bit too much of their time, Macomber noted that “kids these days” tend to be more responsible and socially conscious on social media than their predecessors.

Growing up in the digital age has meant the graduates were able to hone some impressive multi-tasking skills, Macomber continued, joking, however, that their attention spans are roughly the same as a golden retriever’s.

Still, she added, members of generation ‘Z’ are “as kind, accepting and talented as they come.”

In a tradition dating back 35 years, Macomber led the distribution of Oaker Awards. Named for former science teacher and department chair Ernie DiMicco, the awards were given to graduates based on teacher nominations.

“These awards celebrate students’ divergent experiences, successes and, for some, fortitude in overcoming hardships,” Macomber explained.

Other speakers Thursday included McGee, who congratulated the graduates on behalf of the town council and encouraged them to challenge themselves and to “live life with no regrets,” and school committee chair Katherine Patenaude.

Patenaude shared the message of Kent Keith, author of “The Paradoxical Commandments,” which she said was “laid down as a challenge” 40 years ago.

“The challenge is to always do what is right, good, and true, even if others do not appreciate it,” she said, before reciting each of Keith’s 10 commandments.

“While this journey unfortunately comes to an end today, we should all be proud to know that we have lived these past four years embodying the true meaning of living life to the fullest,” she continued, adding that it’s the lessons learned in high school that will lead each graduate to future success.

After a performance of “Take Me Home” by the high school choral ensemble, Sinotte took the podium to deliver the valedictory address.

Striving to incorporate the advice of her family, friends and teachers into one speech, Sinotte said her hope for her fellow graduates is that they stay optimistic in the face of change, remain enthusiastic as they aim high, and embrace their own stories.

“Coventry High School provides its students with an opportunity to develop lasting and meaningful connections,” Sinotte added, moments before the graduates crossed the stage to receive their hard-earned diplomas.

“To my classmates, thank you for the most perfect four years of high school,” she continued. “The class of 2019 is truly something remarkable.”