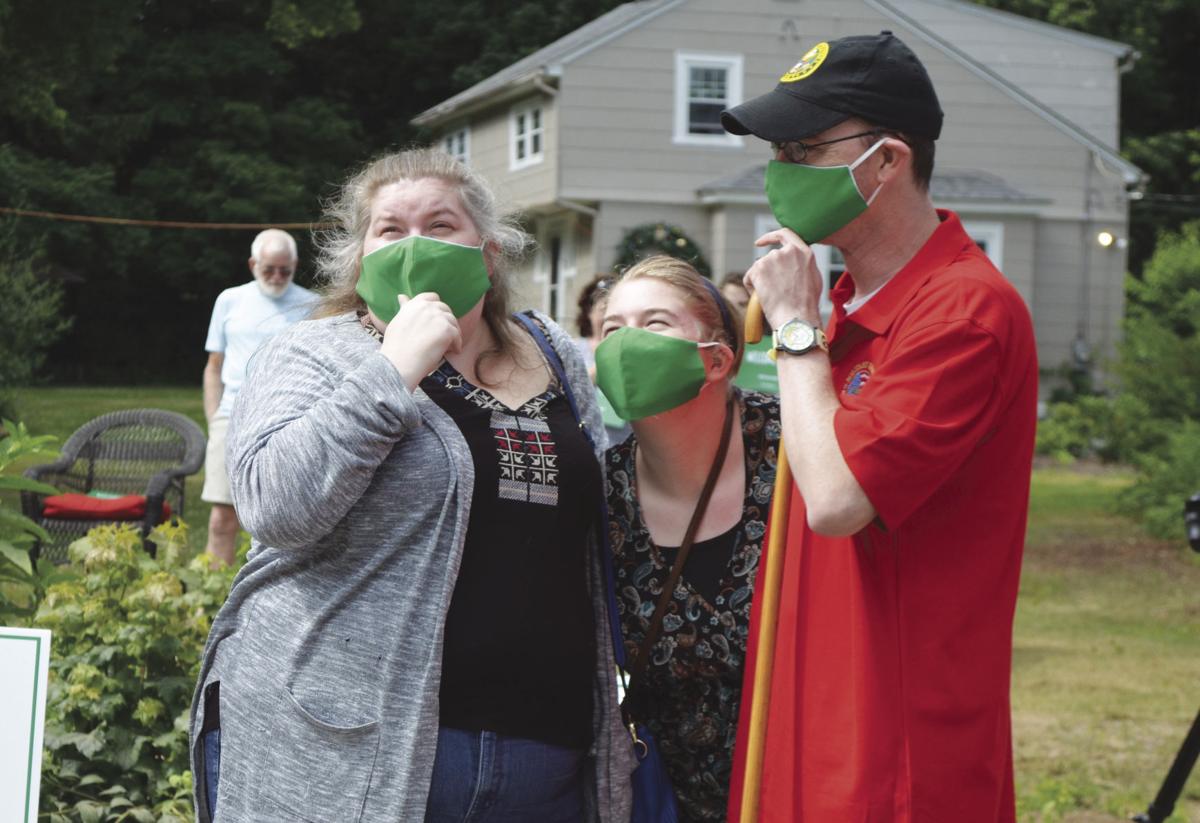 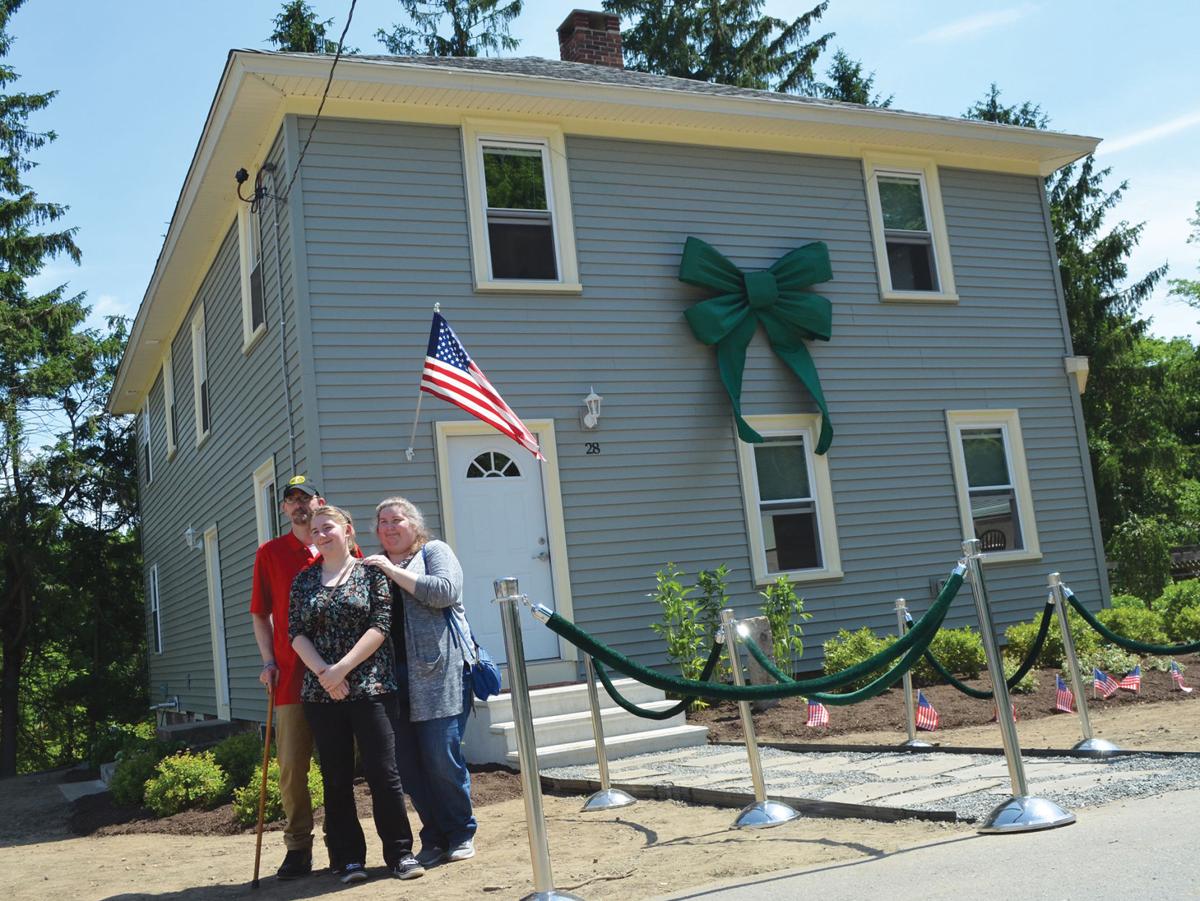 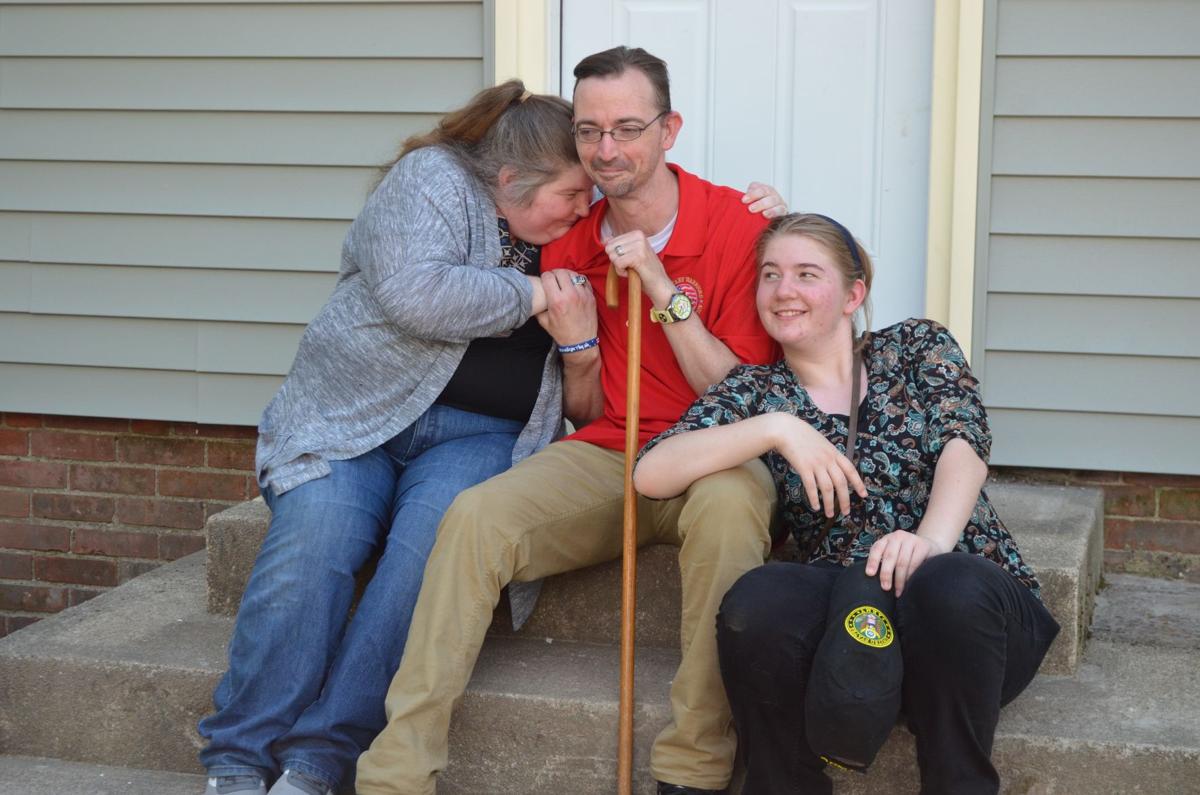 COVENTRY — As he set his eyes for the first time on his family's new home, a freshly renovated house on Hoxie Court in Coventry, Bryan Cline was immediately overcome by a feeling of comfort.

“I know a lot of people say this — that they don’t feel like they deserve it,” Cline, a retired U.S. Army Sergeant and Purple Heart recipient, said Thursday morning, his wife Elizabeth and daughter Katie standing beside him as they took in the home they’d just been awarded.

“It’s not why I did what I did,” he continued, a cane in his hand and a mask over his face. “This is an amazing gift that I absolutely appreciate.”

The mortgage-free home was donated to the veteran and his family by Citizens Bank and the Military Warriors Support Foundation.

The Homes4WoundedHeroes program is one of several programs offered through the Military Warriors Support Foundation, a Texas-based nonprofit. By partnering with banks across the country, the organization over the last decade has awarded nearly 900 homes to combat-wounded veterans and unmarried Gold Star spouses nationwide.

Through the program, the new homeowners are mentored for three years in everything they need to know about owning a home. The organization to date has helped families reduce their debt by some $22 million, said Kathy Feeney, the nonprofit's executive housing advisor.

“You’re not just giving them a home, but you’re giving them the opportunity to grow and feel independent,” Feeney said. “They come to the home, and it’s stability, but it’s really, truly a place of healing.”

Cline’s family has a long history of military service, stretching back to the Civil War.

Inspired by his dad, who also served in the military, Cline enlisted in the U.S. Army in 2004. He was deployed the following year to Iraq, where he supported the 1st Marine Expeditionary Force.

“While there Bryan was a gunner, sent on patrol missions helping to secure a stretch of highway between Baghdad and Fallujah,” Feeney said during a brief ceremony on the front lawn Thursday.

Cline was wounded in 2006 when his Humvee hit an improvised explosive device, and later received a Purple Heart for the injuries he sustained.

“What’s really impressive is Bryan was selfless and went above and beyond by not considering his injuries,” said  Brendan Coughlin, head of consumer banking at Citizens. “His first thought was bringing the others out of the wreckage and saving them.”

Feeney spoke highly of Elizabeth and Katie Cline, as well, adding that they strive to "always [look] for the positives in life."

The family isn’t only new to the neighborhood — in fact, they just left Tucson, Arizona so that they could plant roots in the Ocean State.

“It was kind of a dream of ours to be here,” said Cline, who visited the east coast a few times in his childhood. “It’s just a beautiful area, so close to history, and I just always wanted to be here.”

The family is excited to be leaving the oppressive temperatures of Arizona for a place where seasons vary widely.

For Cline, though, getting out of the desert was about much more than escaping the heat.

“It was OK for a while,” he said of living in a landscape that so closely resembles that in the Middle East. “After a while the PTSD started picking up, and eventually we realized it wasn’t working out too well.”

Having gone from living several years ago in a 625-square-foot apartment, to later living in another apartment, albeit larger, the family is thrilled to finally have a house they can call their own.

The Clines’ is the seventh house that Citizens Bank has partnered with the Military Warriors Support Foundation to donate, and volunteers from the bank have worked tirelessly since the end of January to renovate the 100-year-old structure.

And as the family walked together through their home’s front door for the first time, a wall-mounted sign with their last name and the house’s coordinates let them know they were home.

The house, built in 1920, looks like new. Throughout the first level, photographs displayed for Thursday's tour offered glimpses of the home’s past: in the kitchen, where dated cabinets and countertops had been, there’s now smooth granite and sleek appliances. Fresh paint and modern fixtures have replaced old floral wallpaper and antique radiators.

Upstairs, a wide landing covered by plush carpeting leads to an office, a laundry room, a guest bedroom, Katie’s bedroom and a large master suite.

The home’s interior was painted in neutral colors and decor was kept sparse, inviting the first-time homeowners to put their own stamp on the place.

There were, however, various goodies dispersed throughout each room.

A collection of board games was arranged on the table in the living room; a yellow watering can sat on an end table between a leather couch and recliner, various gardening essentials sprouting out from it; a basket by the entryway held Rhode Island staples like coffee milk syrup and Del’s Lemonade mix.

And on the kitchen counter, a chalkboard displayed $2,500 in gift cards donated by Stop & Shop, enough to keep the family fed for a year. Another $500 worth of groceries already filled the cabinets and pantry.

“This is the best thing ever,” Elizabeth Cline said, standing with her husband and daughter in  their new home’s front yard after touring it.

The family looks forward to doing some gardening in their half-acre lot, and some barbecuing on a donated grill. Cline hopes to eventually attend college, as well.

They’re also eager to get to know their neighbors, they said, many of whom sat by in lawn chairs Thursday to welcome the Clines to Hoxie Court. And Katie Cline, who in the fall will attend Coventry High School as a senior, is excited to meet her teachers and to explore some of the clubs the school has to offer.

“I really don’t know what to say besides thank you,” Cline said, his dream home at his back. “We’re looking forward to starting our new life.”