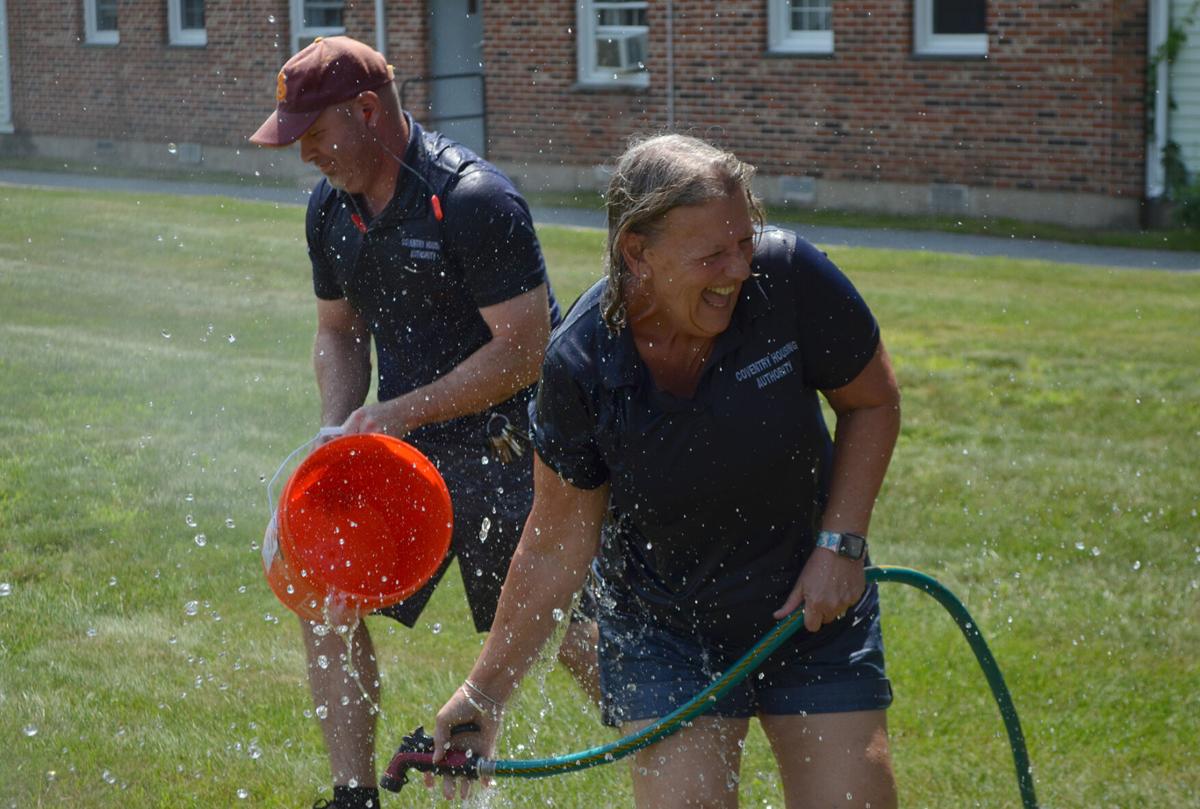 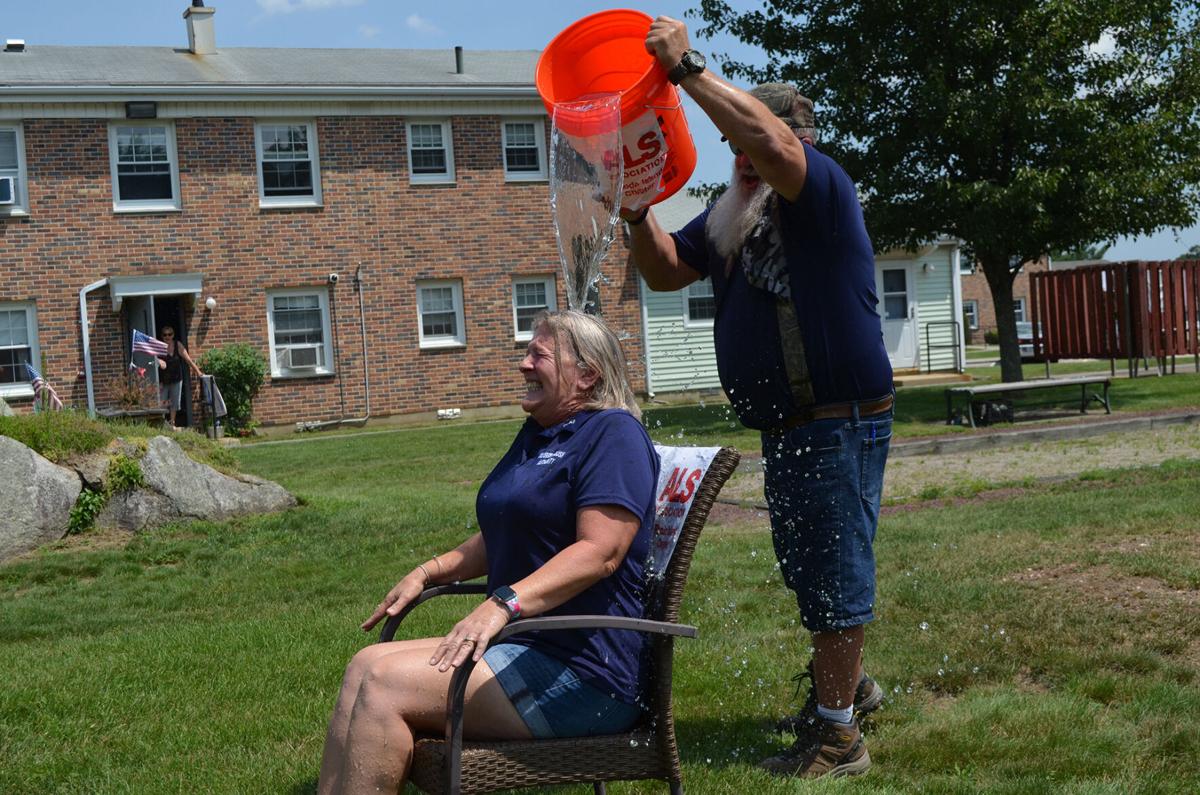 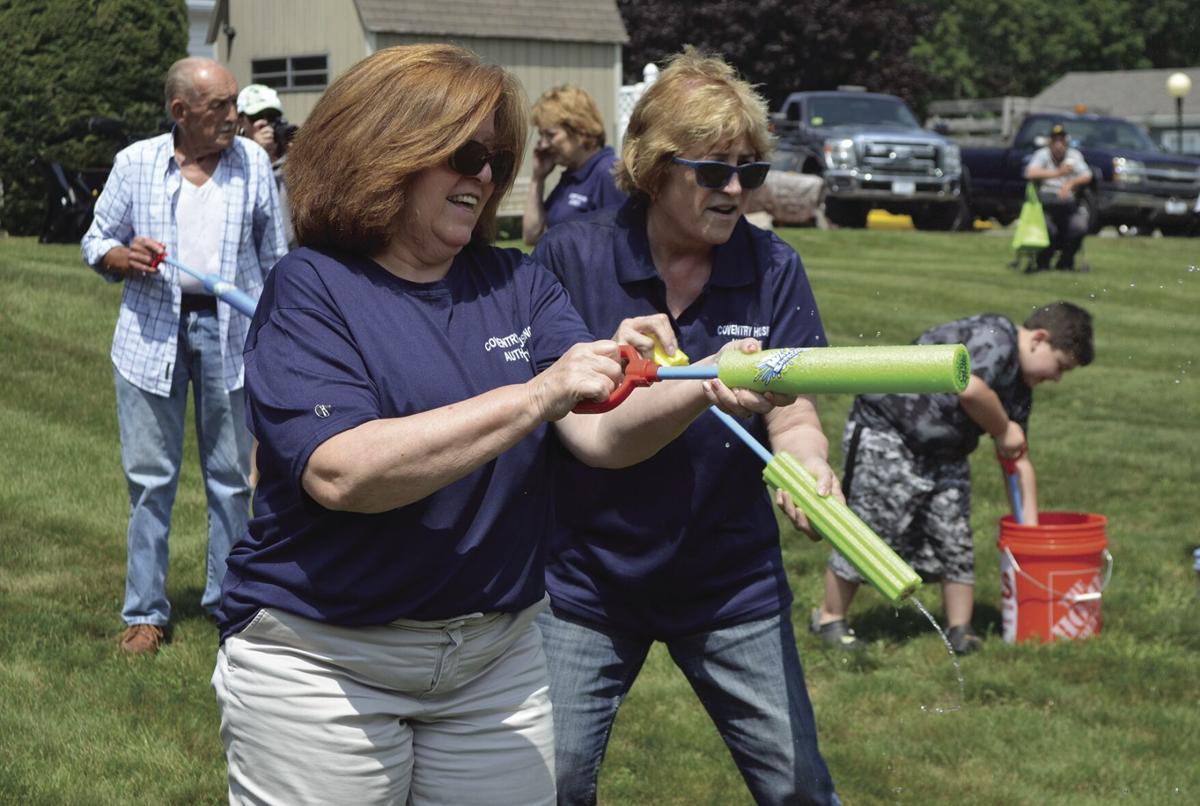 COVENTRY — Julie Leddy sat Tuesday afternoon in a chair set up on the lawn behind 14 Manchester Circle. Around her, staff members and residents of the Coventry Housing Authority stood by large orange buckets, loaded foam water shooters at the ready.

Waiting in the shade of a nearby tree, a group of residents had gathered to watch.

“I’d better get my towel,” Leddy, executive director of the Housing Authority, said with a laugh as she prepared to get drenched.

Despite nearly 90 degree weather, the event wasn’t about keeping cool in the summer heat — rather, Leddy had agreed to get soaked as part of a fundraising campaign to benefit the ALS Association.

Like the Ice Bucket Challenge that preceded it, the CEO Soak was created to bring awareness to ALS, a degenerative disease that destroys the nerve cells responsible for voluntary muscle movement, while raising funds for those affected it.

Only this time, the onus is on executive officers to sacrifice their dry clothing for the cause.

As of Tuesday afternoon, the Housing Authority had raised $1,000, double its goal, to benefit Rhode Islanders affected by ALS, or Lou Gehrig’s disease.

Leddy is thrilled by the support.

“It’s just awesome,” she said. “The people that support you — you just always want to remember that you want to support them back someday. Because everybody needs help somewhere.”

While the Housing Authority has always been a service-oriented organization, Leddy added, she appreciates that so many companies these days are taking steps to serve others.

Statewide, nearly two dozen teams have registered for the soak, and nearly $100,000 has been raised for the Rhode Island chapter of the ALS Association.

Those funds will help alleviate the financial burden caused by the disease.

According to the ALS Association, the out-of-pocket costs to care for someone with the ALS add up to around $250,000. Some 5,600 people in the United States each year are diagnosed with the deadly disease, for which there is no cure.

At the Coventry Housing Authority, what began on Tuesday with Leddy having a bucket of water dumped over her head soon turned into an all-out water fight. Their water shooters in hand, Housing Authority staff and residents chased each other, spraying anyone who hadn’t been hit yet.

The Coventry Mobile Library and Palagis ice cream truck sat close by, offering books and goodies to top off an exciting afternoon.

Paula Horta, a receptionist at the Coventry Housing Authority, was the one who encouraged Leddy’s participation in the CEO Soak.

But, Leddy continued, there was never a doubt that she would support the cause.

For both Horta, of West Warwick, and Leddy, the challenge is personal.

Greg Allin, Horta’s brother in law and a close friend of Leddy, was diagnosed with ALS in 2019.

Allin has since become a strong advocate for others affected by the disease, Horta said. His determination to help patients and their families, she said, is what inspired her to bring the challenge to Leddy’s attention.

Allin’s disease continues to progress, Horta said. He and his wife Gail recently moved from West Warwick to live full time in their more ADA-accessible home in Narragansett

“He’s fortunate he has a good support system, a lot of people who love him — there’s so many people out there who don’t, so whatever we can raise, that’s good,” Horta said. “Every little bit helps.”