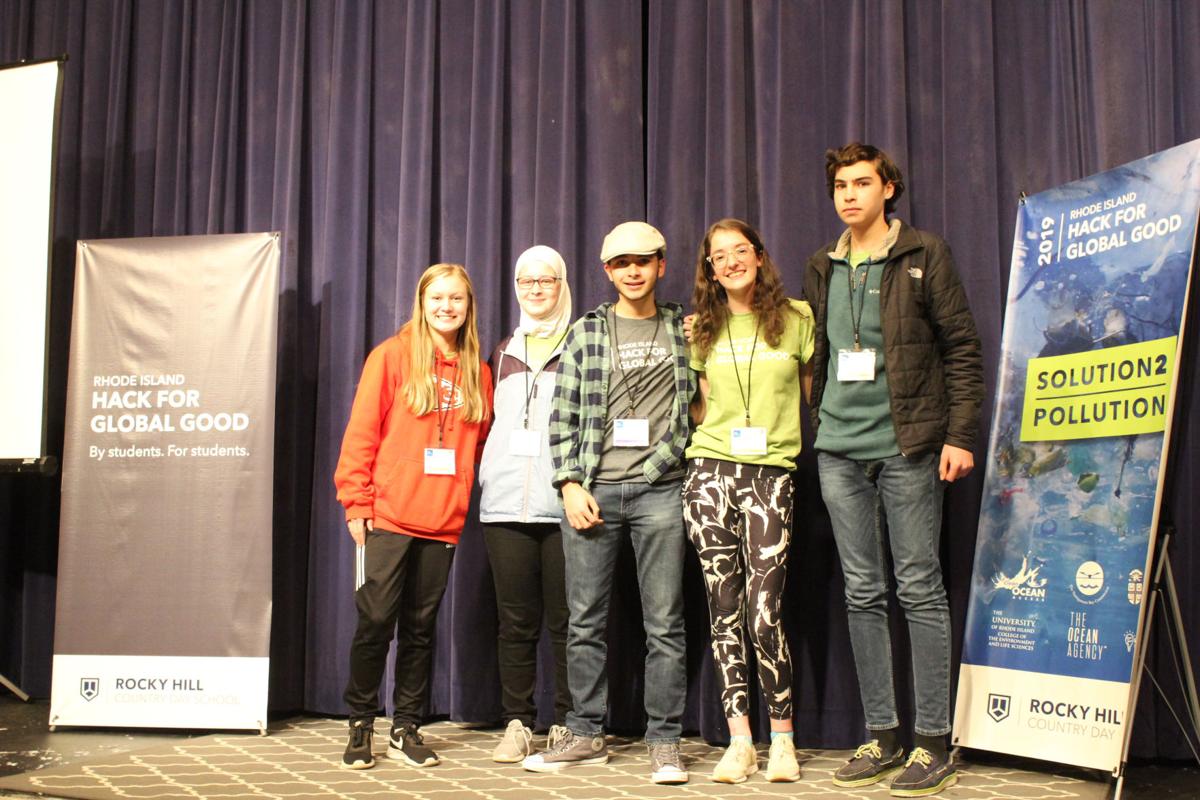 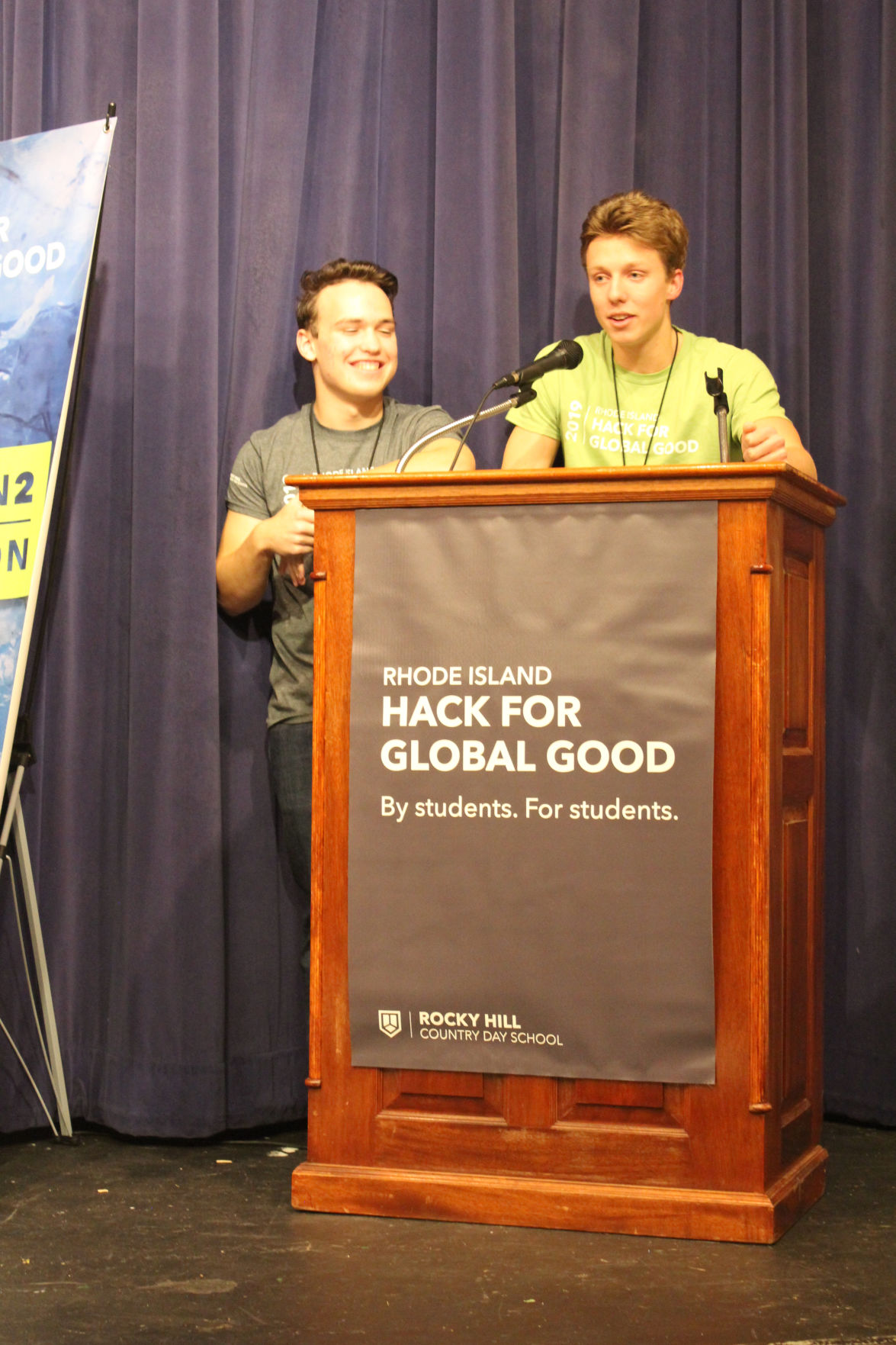 EAST GREENWICH—Seventy high school students from across the state converged on the Rocky Hill Country Day School last weekend to participate in Hack for Global Good: Solution to Pollution, the 2nd annual social good hackathon organized by students and faculty at the school. Students represented Hope High School in Providence, The Met School in Providence and Newport, The Wheeler School, and Exeter-West Greenwich, Chariho, East Greenwich, and North Kingstown High Schools, in addition to Rocky Hill. The objective of the two-day event was for students from all different schools, communities, and backgrounds to come together and form teams to hack the issue of pollution.

The program began with keynote addresses from Arnel Milhouse, who currently serves as Entrepreneur-in-Residence at Brown University, and Richard Vevers, CEO and Founder of The Ocean Agency, who shared their stories and gave advice to the problem hackers about passion, ideation, collaboration, and buy-in for big ideas. The duo also served as mentors the second day, offering workshops and advice along with 23 additional mentors from various sectors of the business world.

Over the course of the weekend, student teams dug deep into research and began formulating plans and presentations in preparation for the evening pitch session. Each team had to present their idea in a five-minute pitch to a panel of seven outside industry expert judges including representatives from Narragansett Bay Commission, RI Office of Innovation, and Clean Ocean Access. Teams were vying for three awards: the Moonshot Idea Award for the most audacious idea to be presented, the Global Impact Award for the solution capable of impacting the most amount of people, and the Best Pitch Award for the pitch that best articulated a pollution-related problem and connected it to a viable and clear solution.

In all, seven teams presented their ideas that ranged from recycling programs that offered discounts and incentives from sponsors, to water-based air filtration buildings, to algae that could be affixed to buildings and clothing to help eliminate CO2, to social justice and community programs in urban areas.

The competition was simultaneously fierce and amicable but, ultimately, The Moonshot Idea Award went to Team Infinity, which included Peter Muhitch, Ellie Rusk, Dana Allababidi, and Samantha Canuel from Exeter-West Greenwich, and Santino Izzi of North Kingstown who attends Rocky Hill. Their big idea was to promote aquamation and Infinity Gardens as a preferred approach to burial and/or cremation. Their message focused on people leaving a legacy of good stewardship in life and in death, perpetuating the model to future generations and family members.

Aquamation is a water-based form of cremation that produces only 10% of the carbon footprint that flame cremation does and generates nutrient-rich water rather than emissions of mercury and CO2. And, rather than traditional burial, which calls for deforestation as well as the production of coffins, the team suggested Infinity Gardens, small gardens that families could purchase for their family remains which would serve as a fertilizer to grow flora and fauna of their choosing. The team noted it as a far less expensive process and the gardens would allow for beautification of cities, rooftops, and smaller spaces in any community. Their prizes included a behind the scenes tour of the sustainable aquaculture farm and organic gardens at Matunuck Oyster Farm, the opportunity to pitch their idea at Social Enterprise Greenhouse for a spot in their incubator program and a 1-on-1 mentorship with Arnell Milhouse.

The cube-based ROV would be available for purchase and have several module options including a camera, water quality sensors, water sampling, etc. The ROV would also be open source if people wanted to make their own units. The information collected would be entered into a website in an effort to offer scientists their most valuable resource, data. Contests and awards would incentivize participation and corporate sponsors. The team won a river kayak on the Woonasquatucket River Watershed, the opportunity to prototype their big idea in the Fab Newport Maker Space, a tour and lab time at the Narragansett Bay Commission’s state-of-the-art water testing facility and an invitation to participate in a brand-new accelerator program at Brown University in collaboration with Arnell Milhouse and other select participants.

The Best Pitch Award was presented to Hy-Gents, a team from East Greenwich High School that included Andy Babb, Chris Teng, Andrew Yang, Alan Zhang and Matt Tactacan, in collaboration from Omayra Corporan and Lydia Osagie of Hope High School. They designed a filtration system that would capture pollution flowing in rivers out to larger bodies of water. The team won a behind-the-scenes tour of Save the Bay’s Exploration Center and Aquarium with the lead aquarium biologist, the opportunity to pitch to Brown University researchers in the Sustainability and Environmental Pollution Programs and potential internships at partner organizations on a project-by-project basis.

The student-created and student-led event was nearly double the size of last year’s, and the students hope to continue to grow the program in future years through outreach and the deployment of recruiting ambassadors from other schools to help promote and plan the program for 2020.

“It’s great to see our next generation joining forces across the state as they design solutions for real-world problems,” Raimondo said. “Congratulations and best of luck to all of the students.”