Skip to main content
You are the owner of this article.
Edit Article Add New Article
You have permission to edit this article.
Edit
Home
News
Sports
Letters to the Editor
Timeout
Multimedia
Features
Classifieds
Obituaries
1 of 4 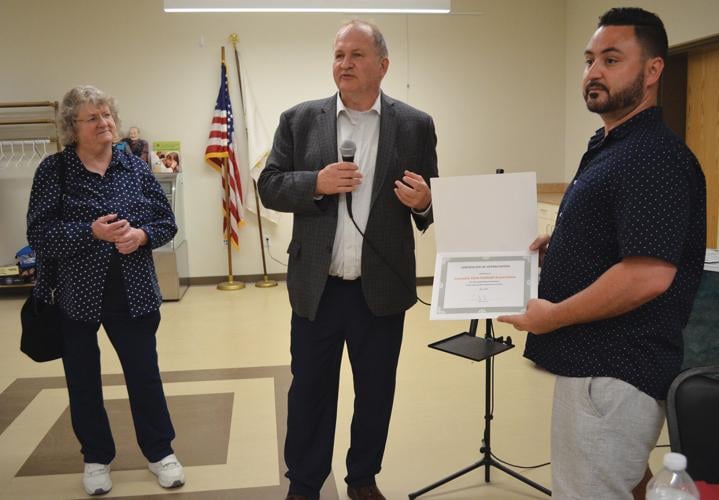 Coventry School Committee Chair Katherine Patenaude and Supt. Craig Levis are pictured above presenting Justin Broccoli, a member of the board of the Coventry Girls Softball League, right, with a certificate of appreciation recognizing the organization during a community open house at the Coventry Resource and Senior Center Monday night. 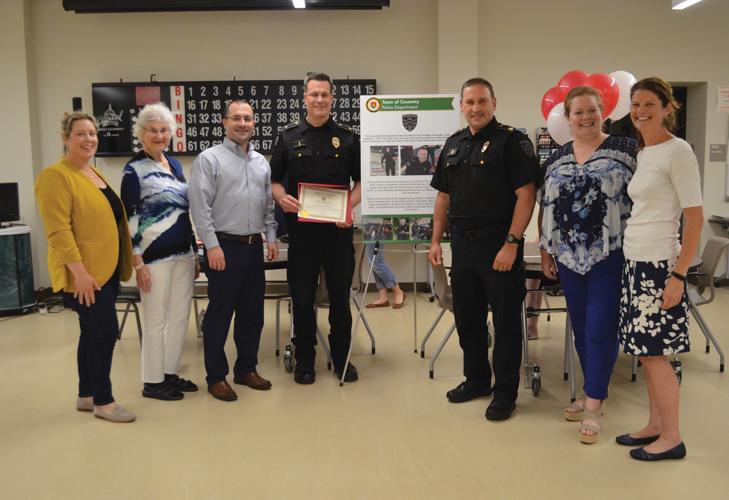 The Coventry Police Department was one of many organizations recognized Monday by the Coventry Town Council. 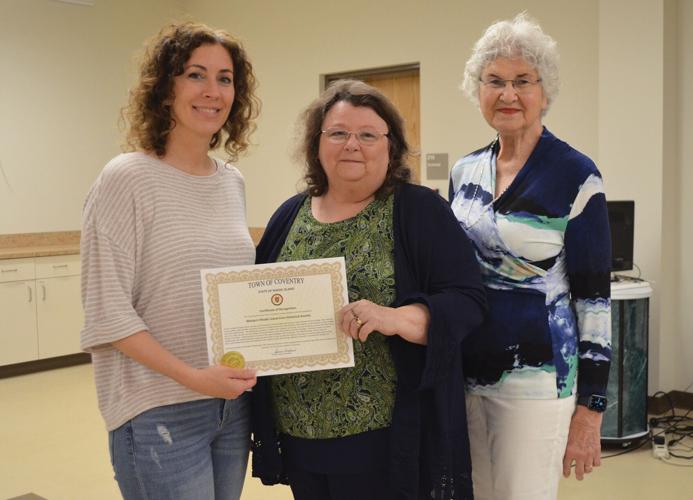 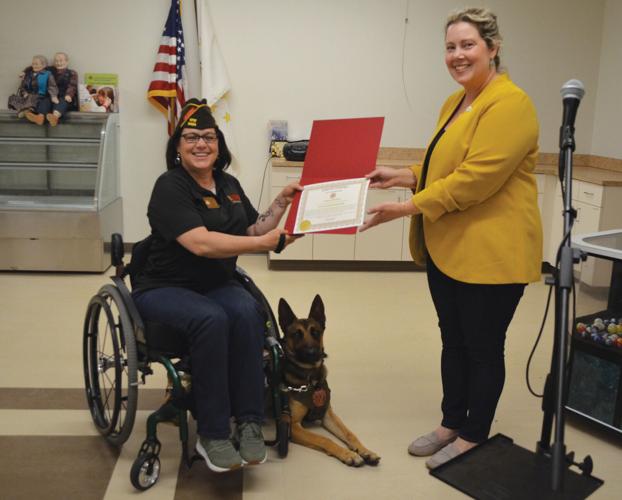 Coventry School Committee Chair Katherine Patenaude and Supt. Craig Levis are pictured above presenting Justin Broccoli, a member of the board of the Coventry Girls Softball League, right, with a certificate of appreciation recognizing the organization during a community open house at the Coventry Resource and Senior Center Monday night.

The Coventry Police Department was one of many organizations recognized Monday by the Coventry Town Council.

COVENTRY — Coventry wouldn’t be the town it is if not for the numerous organizations that strive to preserve its history, or offer recreational activities for its youth, or care for its residents — and an event held Monday let local officials prove just how much those efforts are appreciated.

“What we wanted to do was show a huge amount of gratitude to all of our community partners,” Jennifer Ludwig, vice president of the Coventry Town Council, said as she stood among dozens of community members in the Coventry Resource and Senior Center.

Ludwig and councilor Hillary Lima came up with the idea to host an informal event so that the Coventry Town Council and Coventry School Committee could publicly acknowledge the important work by some of those community partners.

While a lot of attention is given to the town’s faults, Lima said, not enough light is shone on its achievements. She and Ludwig wanted to highlight the dedication of town staff and local organizations, especially during the coronavirus pandemic.

“This town does not run without all of these organizations, all of these community partners,” Ludwig continued. “All of these groups just do so much for the community, and we wanted to let them know that we thank them.”

Open house attendees enjoyed cookies and other refreshments while they mingled, with town councilors and the superintendent of Coventry Public Schools interrupting periodically to present certificates of recognition.

Among the many nonprofits to be recognized was the Coventry Girls Softball League.

“It’s definitely something that you do out of passion,” Justin Broccoli, a member of the league’s board, said after receiving a certificate of appreciation from Supt. Craig Levis on the organization’s behalf. “To be recognized by the town really means a lot. Without them we can’t do what we do.”

The Coventry Soccer Association was honored Monday, as well, and the Coventry Basketball Association, Coventry Lacrosse and Coventry Little League will be recognized at a school committee meeting next month, Levis said.

“You can’t have a vibrant community without families,” Levis said. “One of the most important aspects of a family moving to a community is opportunity for the youth, and we have incredible youth organizations.”

The numerous volunteers dedicated to the betterment of Coventry are often “unsung heroes,” Lima said.

“There’s a lot of people who volunteer their time and it goes unnoticed,” she said. “We wanted to bring it to light.”

For Tina Lavallee, who said she’s worked hard to bolster the VFW Post 9404’s presence in the community since being appointed its commander last year, it felt good to know that her efforts are being seen.

In addition to providing a space for camaraderie among veterans, Ludwig pointed out as she presented Lavallee with a certificate, Post 9404 has hosted numerous fundraisers for veterans in need and has collected food and toiletries for the local food pantry.

Brian Zinszer, vice president of the board of the Gen. Nathanael Greene Homestead Association, also said it felt nice to be recognized.

“Gen. Greene is such a big name, and just an indispensable character in the United States, and people around here don’t know who he is,” Zinszer said. “Anything we can do to get his name out there, we’re going to help as much as we can, so we appreciate everybody else giving us the same help.”

The town council thanked the Department of Public Works for its snow removal efforts and its “ongoing commitment to quality service to Coventry’s residents;” the Coventry Department of Human Services and Coventry Police Department were each recognized for all they’ve done during the pandemic.

“In collaboration with the emergency management team, town fire districts, town department directors and the school leadership, Coventry police stepped up to lead and assist the town’s pandemic response effectively and successfully,” councilor James LeBlanc said as he presented a certificate of recognition to Frederick Heise, chief of police.

Councilors also took time to honor some late Coventry residents whose contributions to the town were significant.

James Spearman, who passed away on April 21 at the age of 80, was recognized “for his decades of service to the town of Coventry and its youth.”

A member of the Coventry Town Council for 18 years, Spearman also founded the Central Coventry Little League and the Coventry Basketball Association and for 47 years was the coach and president of the Coventry Babe Ruth Baseball League. He served as town sergeant, as well.

The council wanted to make sure that Spearman’s family knew how much he was appreciated, Ludwig said.

Monday’s event was also an opportunity to share information about the various town departments, and about the upcoming budget referendum. Posters highlighting the functions of each department — from the library to the planning department to parks and recreation — were set up around the room, and the directors of each stood by to answer questions.

“This is a helpful way for people to really understand what these departments do, who they report to and how they interact with the public,” Lima said.

This was the first event of its kind organized by the Coventry Town Council, but Ludwig said she hopes to see it become an annual event.

“It’s just nice to have people come together for a really good reason, and to recognize each other,” she said. “That’s what we wanted.”

Lima shared a similar sentiment, adding that the council has been trying to think up ways of getting residents more involved with their town.

“This isn’t just the town council’s town, this isn’t the school committee’s town,” Lima said. “This is our town.”