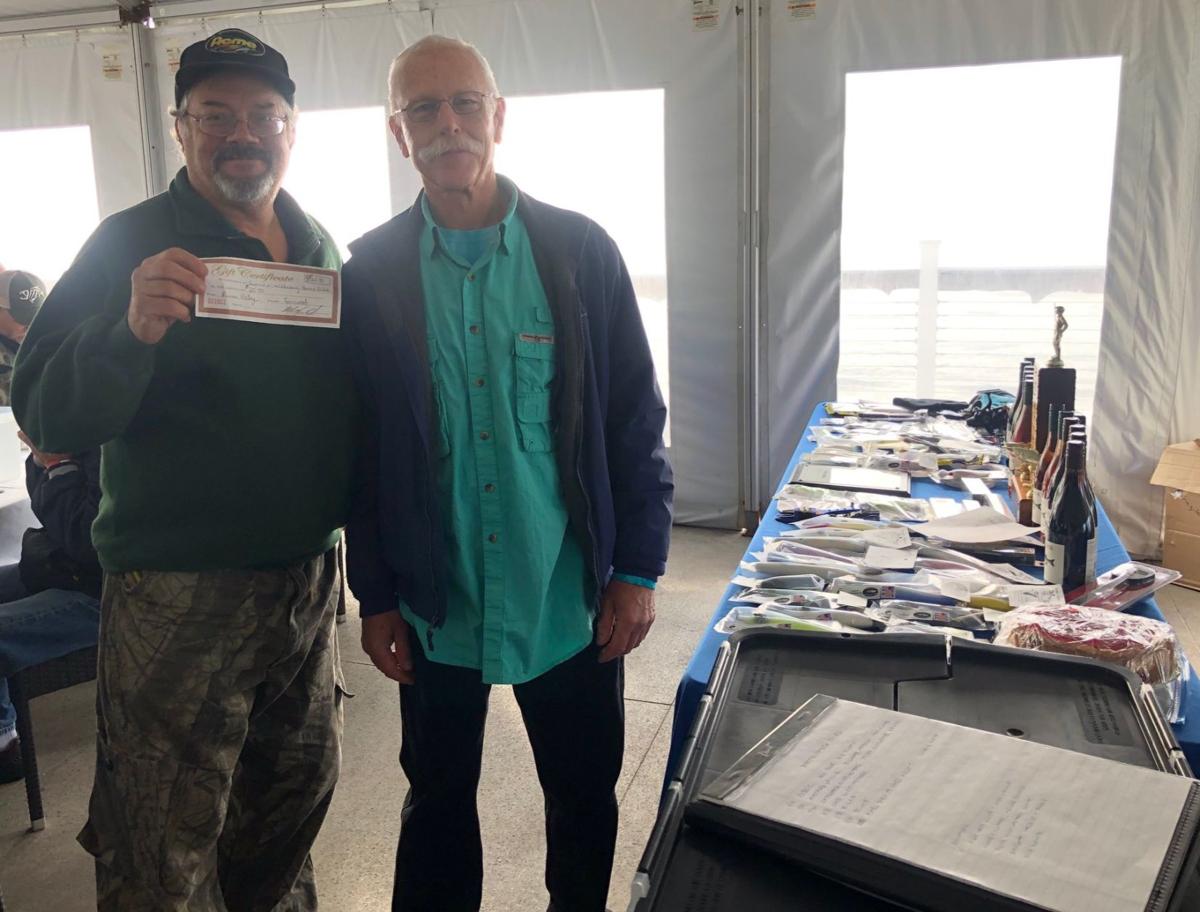 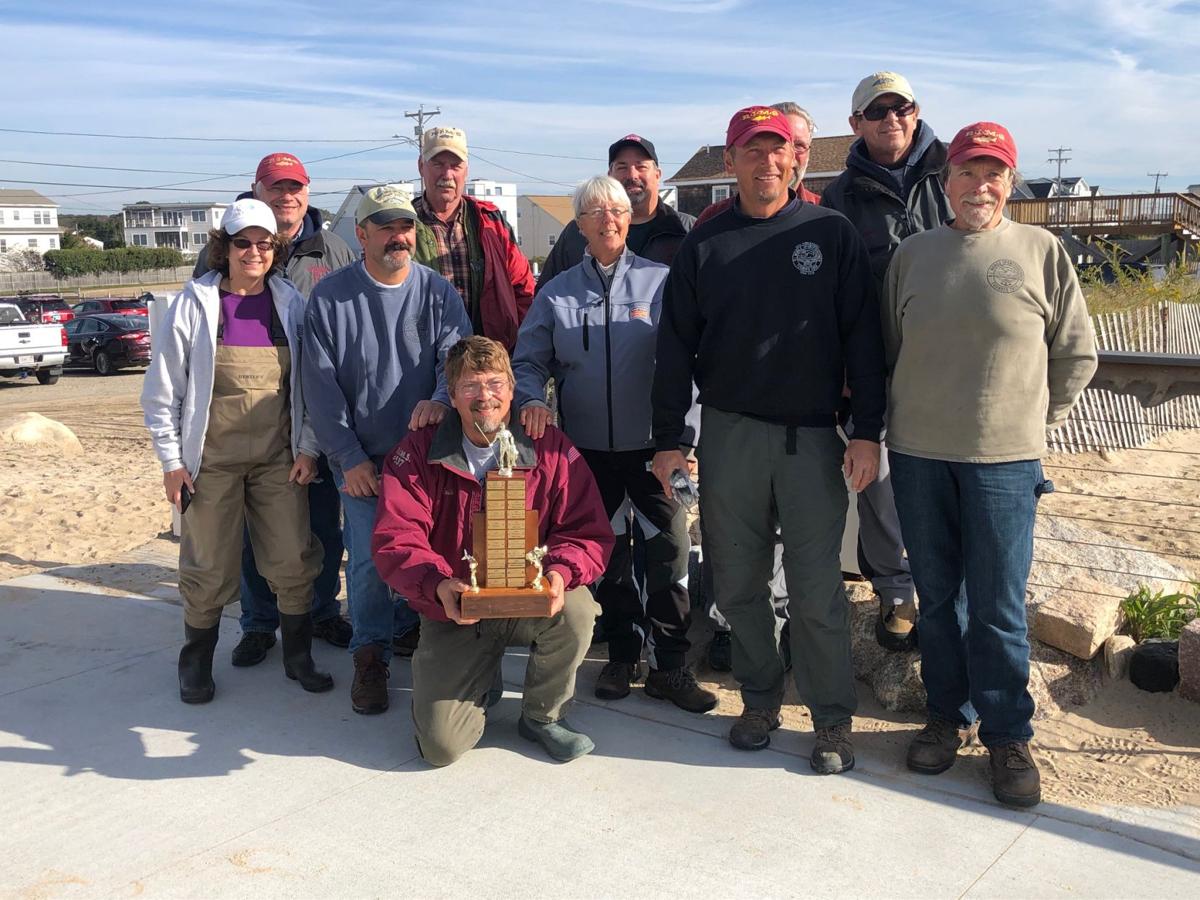 The R.I. Mobile Sportsmen pose for a trophy picture outside the Andrea Hotel.

The R.I. Mobile Sportsmen pose for a trophy picture outside the Andrea Hotel.

Rich Heffernan smoothed his perfect gray mustache and surveyed the crowd. They were cold, hungry fishermen in fleece hats and sweatshirts, the salty uniforms of those who spent long nights in the surf. Rich was helping host the breakfast banquet of the 26th Rhode Island Saltwater Anglers Association Fall Surf Casting Club Challenge at the Andrea Hotel in Misquamicut and it had been a good, long weekend for more than seventy surfcasters. Gathered around long tables, they shook hands and rubbed sore shoulders. Outside, pickups and minivans covered with rods, holders and coolers filled the stone and sea shell parking lot while small waves rolled over a few holdouts in waders while a seal patrolled a few hundred feet off the beach, ensuring no one caught anything.

Seven groups were represented, including the R.I. Mobile Sportfishermen, Massachusetts Striped Bass Association, RISAA, Narragansett Surfcasters, Pioneer Valley Boat and Surf Club, Hartford Surf Fishing Club and the Weakapaug Surfcasters. Together they had fished from northern Narragansett to Watch Hill, hoping to land stripers larger than the 36” minimum size. It’s easy to explain away bad fishing to weather but it was pretty clear outside and that there were no big fish around.

“A few fish, up to 25”, 26”, maybe 27” someone mumbled through a mouthful of sausage egg bake. Weekend conditions had been decent if not unchallenging. Hardcore surfcasters prefer to be in the eye of hard storms with rain pelting their headlamps, fighting cows no one else will likely ever see because they’re a different breed. A calm cool night isn’t the stuff of legendary late winter story sessions.

“I didn’t catch nuthin’,” said a big man with a sprawling black and grey beard. At the next table, Ray West had driven down from Massachusetts to fish around the Pt. Jude lighthouse and when the sun set, the long beach at Napatree Point. Ray’s a solid guy, you can tell. He slept in his truck in between casting sessions. You could tell a lot about the group clutching paper coffee cups, maybe just to keep warm inside a cold tent, devouring plates loaded from a big and rich breakfast buffet. After a long night casting at shadows in falling temperatures, you just can’t have enough bacon and sausage. Erik Rogden of the R.I. Mobile Sportsmen unveiled the trophy, which dates back to 1992 and is a cherished possession to each year’s winning club but that’s only part of their reward.

Surfcasting can be a lonely man’s sport. It demands experience with hours of daylight scouting to find a promising spot which often isn’t by the time you show up at night. It’s part of the deal to walk, cast and hope for hours until a rising sun reminds you of mundane tasks you neglected yet it only takes one pull on the line to reset the clock. It’s a needed retreat from this fast world focused on screens and palms flowing with instant answers. It takes real skill, real time, real patience to land a big striper you just knew was there somewhere, gliding behind a boulder or camouflaged along a shifting sandbar, waiting for the right bait, which is what you knew to throw. Some had walked west from East Matunuck where curtains were all drawn against arguably some of the year’s best views and sunsets. October night air smelled of wood stoves not beach fires. There were no tracks to follow. Even with crashing waves they fished in silence. Surfcasters know the value of all that.

Fishermen walked around the raffle table full of pliers, High Hook wines, jig heads and plastics, custom made lures from Mike’s Custom Plugs and Vinnie’s Customs and a cheesecake. There was an obvious line in front of the cheesecake. Surfcasters do not live on coffee and cold sandwiches alone. The lures, and the cheesecake actually, were real works of old school art. Like most things now, good lures cost far more than we remembered paying for the wooden classics we still hang onto or display over workbenches. Covered with teeth marks and dings from black rocks, they are proof positive the designs were right. Mike’s and Vinnie’s are worth every dollar; you can see the time and experimentation that went into each. Marc Chagal said, “Great art picks up where nature ends.” Indeed, holding one of those hand crafted lures, appreciating parts and pieces, paint and sealer, balance and form, should be inspiration enough to skip the nightly TV whatever and reach for your waders.

The largest striper plaque went to no one, since not one over the minimum was landed. The coveted team trophy went again to the RI Mobil Sportsmen but not for a bass, but for a combination of three bluefish: 1.77#, 1.48# and 1.67# for a total weight of 4.92#. Those aren’t great bragging rights but Erik Rogden gladly accepted back the trophy for his team.

The day’s other big prize was a Penn Fierce II reel. Dick Geldard won it then quickly asked if there were any young fishermen who would like to have it. Rich again surveyed a room of seasoned and three-day beards. One fisherman rubbed his sore knee. One clutched his cheesecake prize. No one looked younger than forty. Young surfcasters were as scarce as keeper bass. I hope they both come back to the beach.

Todd Corayer is a lifelong fisherman who lives not far from Rhode Island’s Saugatucket River with his wife, who supports his fishing mainly to get him out of the house and a young son who consistently catches more stripers than him.