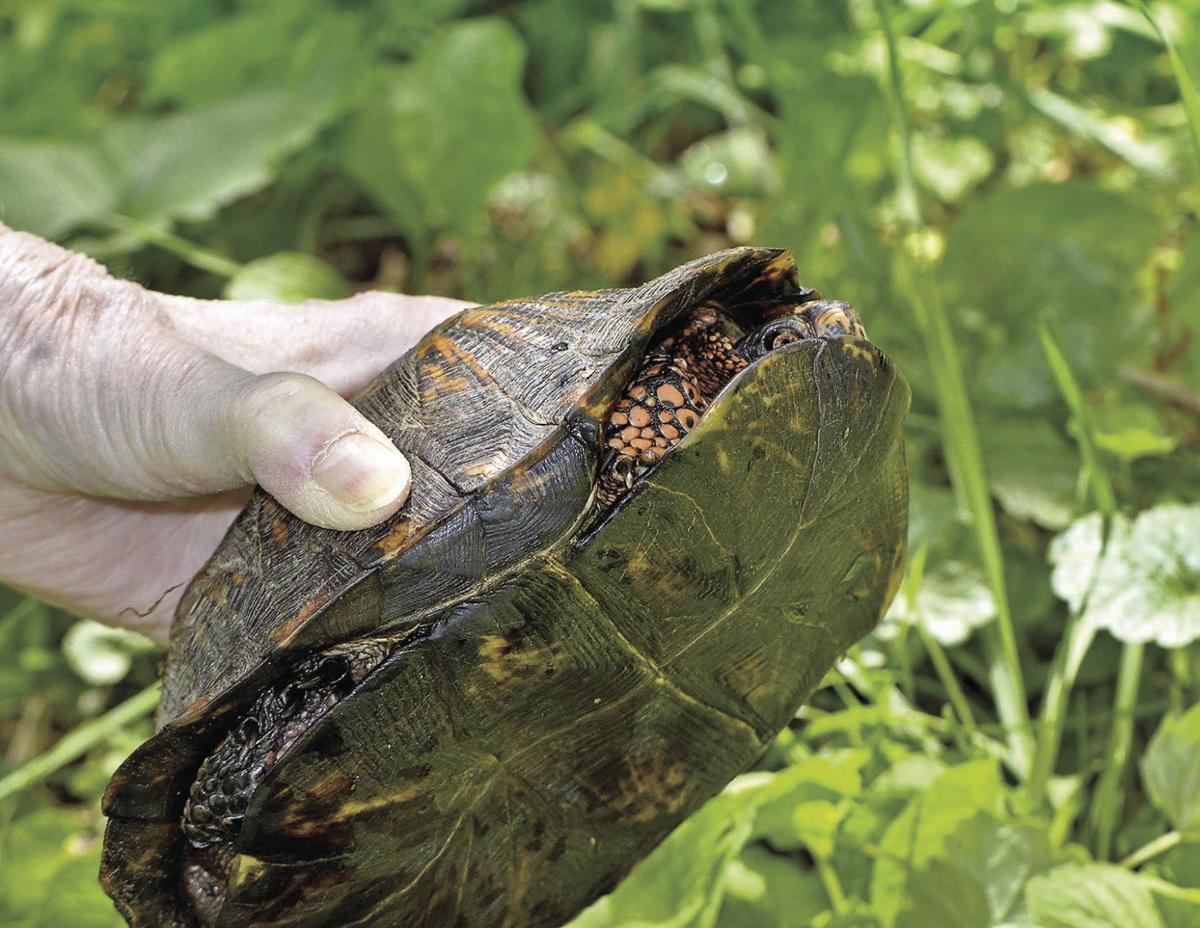 One of the hallmarks of the Box Turtle is the central hinge on the underside-- the plastron-- of its shell. This anatomical adaptation allows the reptile to withdraw, when danger threatens, to safety so completely that it is virtually immune from all predators, save one: us and our cars. 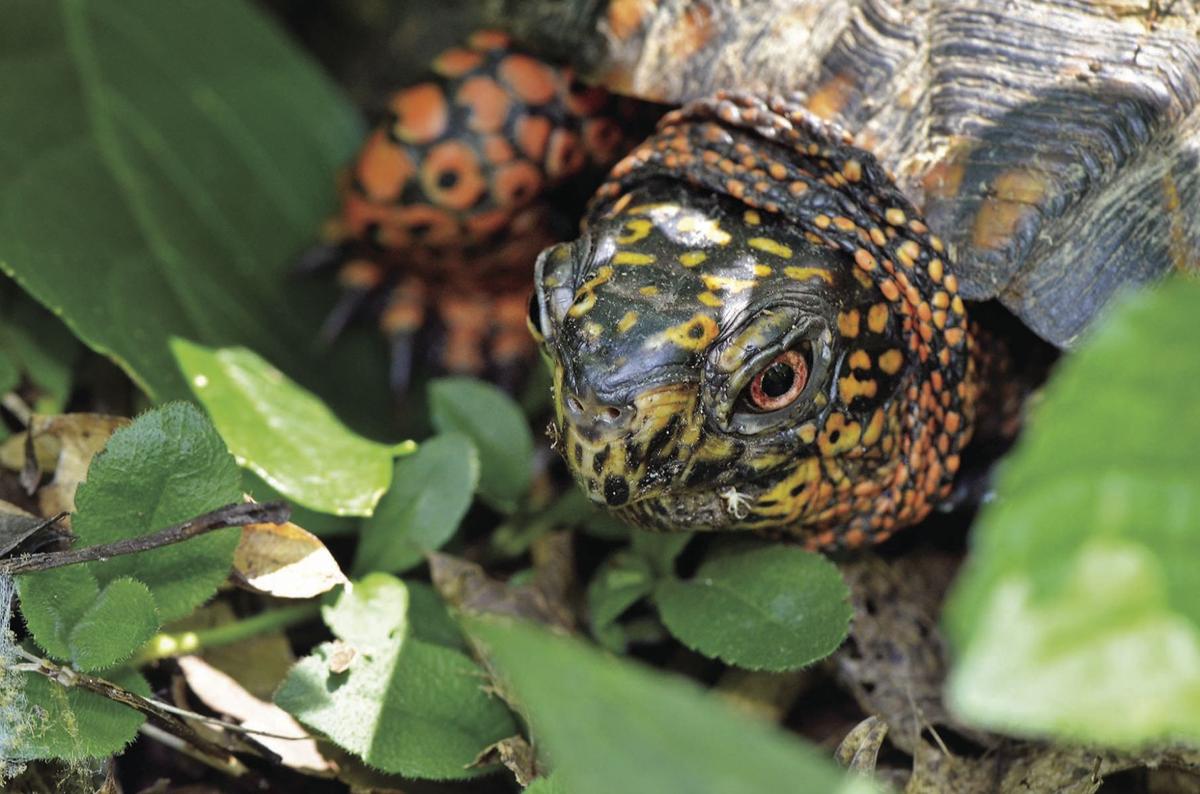 One of the hallmarks of the Box Turtle is the central hinge on the underside-- the plastron-- of its shell. This anatomical adaptation allows the reptile to withdraw, when danger threatens, to safety so completely that it is virtually immune from all predators, save one: us and our cars.

My wife Pam almost burst into tears of complete joy when she saw the Box Turtle in what passes for our lawn. My granddaughter Stasia was absolutely transfixed by the worn patterning on the shell of what I think was an elder reptile. And the Naturalist? Well, let’s just say that your reporter on all things wild and free experienced a definite softening in his normally hard heart—the one that comes from feeling especially blessed.

The reason that Terrapene carolina sparked such emotion in the ridge’s senior human residents—Stasia’s curiosity is the universal human response—is that the Box Turtle’s appearance here was so unexpected, to say nothing of so long overdue. We’ve been in our current stretch of woodland since 1984, and though much has changed across our rural road, with the desecration, er, development of a large field and forested area, our backwoods have remained pretty much untouched. The forest still supports a wide variety of wildlife, and when we set up shop in southeastern Connecticut 33 years ago, we soon discovered that Box Turtles also called the ridge home. Every summer, one or two of these reptiles would temporarily move into the open area between the house and our southern boundary wall, and T. carolina’s annual visit was always cause for celebration.

I think the attraction for the turtle may have been the abundance of low-growing dewberries and blackberries that thrived in our deliberately unkempt border “gardens”—more to the truth, the areas I never quite got under cultivation—and provided the omnivorous reptiles with a steady diet of delectable fruit. There was always a brush pile or two for cover from the weather and a thriving population of bugs, worms, and other invertebrates. We had cats, to be sure, but the felines never appeared to pose any threat to the well-protected reptiles, whose body armor, especially the hinged bottom shell, the plastron, into which the turtle could securely withdraw, had evolved to keep predators at bay.

So T. carolina seemed secure in our midst... until a little past the beginning of the Millennium, a spring when the reptile never arrived “home.” At first, we figured this was a fluke, but after several years went by without our spotting a Box Turtle, we came to grips with a sad reality: they were gone... ghost reptiles.

Perhaps “our” T. carolina had simply died of old age. This happens eventually. These hardy critters are remarkably long-lived, and a lifespan in the wild of 30 to 40 years is pretty normal. In fact, there are persistent anecdotal reports about Box Turtles passing the century mark.

The best-documented record has Rhode Island roots, albeit circuitous, and comes to us from a research paper published in 1954 in the august Transactions of the New York Academy of Sciences. In “Some Longevity Records of Vertebrates,” New York Aquarium marine biologist Ross F. Nigrelli wrote that a 19th-century South County gentleman named Edward Baker Kenyon gets special documentary credit because he engaged is what has become a discredited practice: when he was 19, Kenyon “etched his initials on the plastron of a Carolina box turtle in 1844.” Amazingly, Nigrelli continues, in 1953, the turtle “turned up alive at the Bronx Zoo. It was sent in by another youngster, Billy Johnson, who found it on his grandfather’s farm in Hope Valley, R.I., a half-mile from where Edward Kenyon lived. The date would make the turtle 109 years old, but, after careful examination by herpetologists at the Bronx Zoo, the American Museum of Natural History, and at the University of Florida, it was concluded that the minimum age of this turtle must be 129 years.”

Actually, the reptile may have lived to be 138.

There’s no telling how old our ridge Box Turtle was, but the end does come to us all, although in T. carolina’s case, natural causes might not have been the culprit. It’s possible that the turtle simply changed its behavior and picked a different route to travel, but these are creatures of habit and maintain a fairly small home range—the average is about two acres—throughout their lives. Young Box Turtles are wanderers, and they’re terribly vulnerable to predators while they’re growing up, which can take ten years, and finding their own place in the natural world. But once T. carolina reaches maturity and develops the hinged plastron that keeps it safe, it has little to fear... except for one thing.

Far too many Box Turtles meet their makers in the course of trying to cross roads that cut across ancestral pathways and being crushed by cars. In an 1860 journal entry, Henry David Thoreau made note of what would become a genuine problem. “In the ditch by the roadside on Colburn Hill [was] a box turtle which was crushed some time ago, and there is the mark of the wheel that passed over him. It is remarkable that, though I have seen but four or five of these turtles in this town, two at least of them had been crushed by a wheel,—that, few as they are, they should have got in the way of a wheel."

Sadly, cart wisdom never arrived in this species, and things got much, much worse with the advent and landscape domination of the automobile. Worse still for Box Turtle populations, these slow-moving and quite attractive—the yellow markings on their shells are said to resemble dappled sunlight—reptiles were collected en masse for the pet trade. While T. carolina is now a protected species both locally and internationally, and this reptile-napping is presumably behind us, other problems we’ve caused—especially habitat fragmentation and destruction—continue apace, and, as a result, Box Turtle numbers remain on their downward trajectory.

But maybe there’s hope. Last week, in my Journal entry about my trek to the Avalonia Land Conservancy’s Peck Preserve, which was being managed for New England Cottontails, I discovered that thicket building is also beneficial for creating suitable habitat for Box Turtles. With any luck, it’ll be proof positive of the old adage, “If you build it, they will come.”

I hadn’t, of course, carved my initials and the date on the plastron of the turtle that used to pay us an annual visit and then, sadly, disappeared. So there was no way of knowing, as we watched this marvelous and utterly unexpected beast sniff the blackberries and earthworms we offered, if this was “our” T. carolina—a fellow traveler who hadn’t vanished after all but had just decided, for whatever reason, to start taking a different route on his long journey around the figurative block. Perhaps this was our old friend returning to view; perhaps it was a newcomer checking out the neighborhood. There’s no knowing the mind of a Box Turtle. In either case, however, the sighting was cause for a delight. As the reptile lumbered through the grass and into the underbrush, we cheered, wished it the very best of luck, and prayed that it would enjoy fine food, good shelter, plenty of mating opportunities, and the good sense to avoid roads. We also prayed it would, sooner or later, grace us with a return visit. And a population increase. We’d supply the fruit and the invertebrates for that celebration.

A Note to Readers: Wherever your eclipse-viewing takes you on the 21st—I’ll, alas, be staying on the ridge this time and only taking in the partial eclipse—here’s wishing for fair skies and abundant eye-protection.

Hi, thanks for these amazing blogging post. All the things that you have said just fabulous and inspiring. Thanks a lot….